A TRIO OF 1860s DRESSES ON MY ASSEMBLY LINE

My last post was in May. You’d think by now I’d have a lot more sewing done, what with no costume events, no sewing workshops, no picnics or teas, no fashion shows, no nothing. And that’s about how much sewing enthusiasm I had. Nothing.

Towards the end of June as some businesses and locations were starting to open up (yay, a haircut finally!) my friend Shelley announced she would be able to host a sewing workshop in her church hall where we could socially distance, with a limited number of people. People! We would get to see and talk to people! One of the ideas I’d had for sewing was my new Truly Victorian pattern, #452 for an 1860s Work dress. I liked the gathered front bodice of it, and I wanted to try another one, especially after liking the Simplicity 4551 dress. Except after I’d ordered the work dress, I realized I also had TV 447, the 1863 sheer bodice dress, which was almost the same, and I could have used that. Oh well. 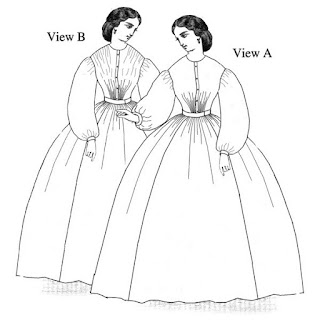 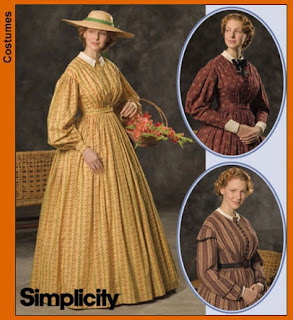 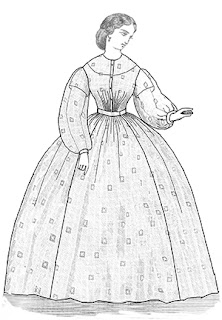 I looked through my fabric stash photos and picked out three, yes three, fabrics, because I was going to cut them all out and then assemble them all together. I would sew all the bodice seams, then the sleeves & cuffs, then attach all those to their bodices, then sew up the skirt seams, and basically just construct the body of the dress. At some point in time, I will pick which one I want to finish first, and then decide on the collar, buttons, and any trims. These aren’t going to be “work dresses” because I don’t plan to make them as that.

Honestly, I can’t even decide which is my favorite fabric. I’ve always loved the red and pink feather design one, and have had that the longest. But I go back and forth between the two blues. The dark blue looks more of a winter color, and the blocked blue on white print is a fine cotton voile from India, so a summer dress.

By going to a sewing workshop, I would be able to sew up my fitting muslin, getting it fitted to me, and work out any bugs. After reading the pattern directions, I realized it had an inside fitted bodice, which I didn’t want to do. I was going to just flatline my fabric with a fine cotton twill to give it body. 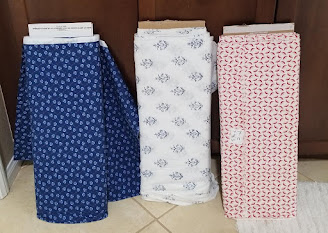 After I sewed my muslin together, Shelley noticed that I had pleated the front too far apart between the center and the sides. She said it should actually be gathered and the gathers should be pulled as tightly close to the center front as possible. That was an easy fix. I was able to flat line my three bodices and sew up the side and shoulder seams in class.

In the next few days, I tore my lengths of fabric for my skirts, using 3 ½ panels, and sewed up the side seams on those. I’m going to try the dogleg closure on the skirt waistband and bodice this time so they close in the front as one piece, instead of a skirt and bodice. 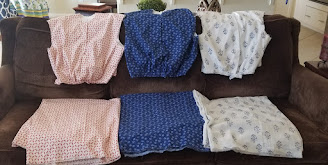 I went almost a full month before I even felt like sewing up my sleeves and cuffs. The cuffs are extremely narrow, about 2” wide, and the bishop sleeves are very full and blousy at the cuff. Except when I put them on, I felt like I was in a clown suit, and probably would be knocking things over waving my arms as I tend to do. So, I l un-stitched them, and laid them out flat, cut off 2” from each side, for a total of 4”, and sewed them back up. Then they were much better proportioned to me but still full. I sewed them to my bodice, and again, that’s as far as I got.  At this point I decided I would now set them aside to finish later, and pull out three fabrics for some 1830s dresses. My thoughts are I can use up my stash.

Fast forward almost another month, and I thought it was about time I put these on my dress form so I could see what they looked like and take photos of them to show I’d been doing some sewing at least. I was also going to be doing a Zoom class online and after seeing some other people doing theirs, I like the idea of one of my dresses being seen in the background, especially since I would be doing it from my sewing room, and didn’t want the room to look too busy. So here I have each one displayed. The skirts are not cartridge-pleated yet, so I just pinned them to the waist, and added a black belt I had. I’m in the process of ordering some pretty belts from Kristen at Black Orchid, one in red, another in navy blue. This is one of her brown ones, and one of the dresses she made. 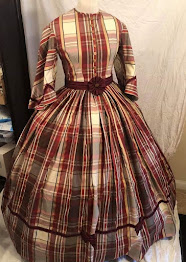 I think I could actually interchange both the red and blue colors between the dresses to give them a different look. I also need to make their buttonholes and buttons, and some white collars for each of them. 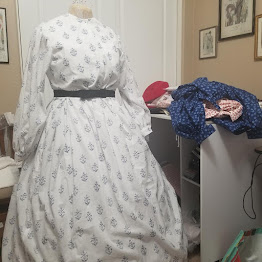 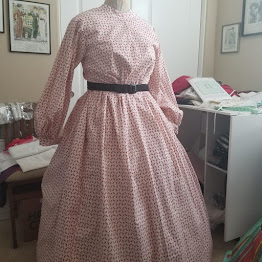 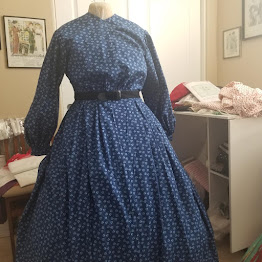 After watching a bunch of videos and class presentations from both CGW’s Costume Retreat classes and CoCoVid videos last weekend (not affiliated with Costume College/CoCo) I felt a surge of enthusiasm to sew again. Yay! That’s what happens usually when we go to events or classes.

As soon as I’m done with a couple special orders of 18th C. kerchiefs that I’m hand sewing, I’ll start on the cartridge pleating of these, since I like to have handwork at night while watching TV.

And it looks like I’m going to be doing my presentation to the San Diego DAR in October also online. Its going to be a Powerpoint historical fashion show, similar to what I did for them a couple years ago but this time with no live bodies wearing the clothes. At least I still have a few months to work on it, and get better at using Zoom.

In the meantime, I’m collecting my ideas and photos together for the now four 1830s dresses I want to cut out and do the same assembly line sewing with them. I plan on altering some of them to close in the front since I can’t even fit these on me or put them on without help.

This tote bag was where I would throw my fabric scraps in that eventually made it in the trash, but Chloe has turned it into her sleeping bag. 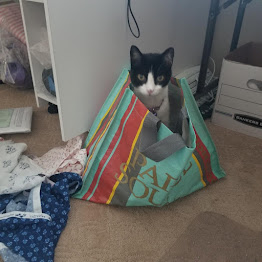 Posted by Time Traveling in Costume at 3:40 PM