Started first outfit, July 2008; final outfit May 2010.
For those of you who don’t know what Steampunk is, it’s a cross between Victorian and Science Fiction. It would be like a Victorian in the 1880s traveling into the future, and coming back with all the modern things they found. If it was machinery and had to be constructed with the materials on hand at the time, most would involve steam, since Victorians were just coming into using steam engines. Hence, the name Steampunk. There is a book called Steampunk by Ann & Jeff Vandermeer (Editors), and Girl Genius by Phil & Kaja Foglio (http://www.girlgeniusonline.com/comic.php?date=20030915).
Since I come from a historical costumer background, I wanted to use my current costumes and “steam” it up. Mixing in modern clothing and accessories were fun, and there’s no rules of what you can and can’t do. As I thought along the lines of time travel, I decided to come up with a “Time Travel Agent” character that could help you travel “Any where, any time!”, which is my logo. My accessories mostly involve clocks, compasses, maps & sundials for planning those complicated travels. I think I had the most fun painting and decorating my raygun. You gotta have one of those! You never know what might happen in your travels.
These are photos of the evolution of my costume.I’ve already put together and worn a couple different versions of my Steampunk costumes, and each time I wanted to do something else to it. I felt like I was starting to look too modern, and was losing my Victorian roots, so I decided to start from scratch. 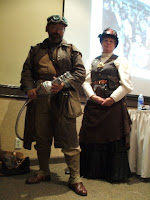 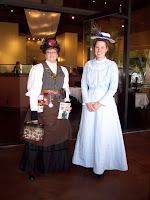 I even did a Steampunk Pirate.

My newest outfit was thought up and “thrown” together more quickly than I normally make my costumes. I used two previously-made Truly Victorian patterns for the skirt (TV221) and the bodice (TV 420/460). I made the bodice without sleeves to become a vest. 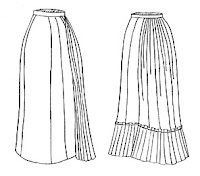 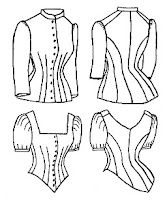 The skirt is pleated in the back, and is made to have a bustle. The bodice has a peplum in the back that would go over a bustle, but this can be worn without one. Most likely I won’t be using a bustle depending on where I happen to go. But when I do, it would be my lobster tail bustle, which is pretty narrow and doesn’t knock things over.
I wear a purchased reproduction Victorian blouse from Recollections with a high neck and puffy sleeves.
For my accessories, I plan to wear a brown Victorian hat with feathers that I bought, and trimmed it with a hanging pocket watch. My other hat option is my safari helmet with goggles on the crown, depending on the theme we’re going with. I also have a brown haversack I purchased to use for carrying extra things, like my Sonic Screwdriver or cell phone. My vest is trimmed with watches, sundials, compasses, pilot’s wings & my Girl Genius Agatha Heterodyne pin.
I recently added a Steampunk Mickey pin from Disneyland, since they’ve joined in with the commercialism of Steampunk. There’s 5 different designs, each with a limited edition of 2500. The one I chose is of Minnie Mouse, and it has a big moving gear behind her & goggles on a top hat. 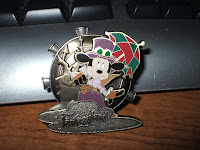 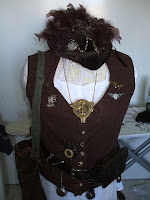 I also wear a black leather belt around my waist, outside of the vest, and it holds my brown leather cartridge case, which can carry my wallet. I occasionally wear fingerless knitted mitts, and I wear my black leather boots with flat heels. I hope at some time to make some black brocade spats for them, but since the skirt is long, you wouldn’t ever see them, so it’s not a priority.
I got to wear this at Bats Day in the Park at Disneyland, on May 3. 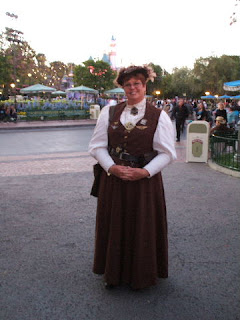 Posted by Time Traveling in Costume at 10:50 AM 2 comments: