WOMEN’S REVOLUTIONARY FASHION; A Presentation for the San Diego DAR 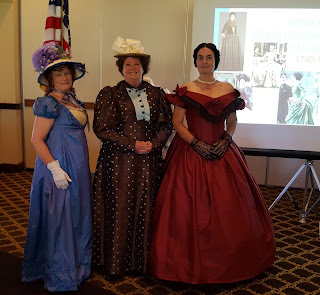 Almost exactly a year ago I was contacted by Judith Reale, a representative of the San Diego Chapter of the DAR (Daughters of the American Revolution), about the possibility of putting on a historical fashion show for their Chapter’s annual meeting the following year. Unfortunately, it would be on a Friday, so I couldn’t do it because most of my friends who will model for me all work. A couple weeks later she contacted me again and asked if I could possibly do one of my other presentations I do by myself. Well, sure, but it’s mostly focused on actual costuming and I didn’t know if it would be of interest to those not involved in wearing historical clothing. But I asked if I could think about it and see if I could come up with something better suited to them. I said I could do something like Two Hundred Years of Fashion with some dresses on display, and wearing one of my own. Judith liked that idea, so I began gathering my thoughts. In the meantime, she put together an introductory page in their newsletter about my program, and picked her favorite photos from the ones I sent her. 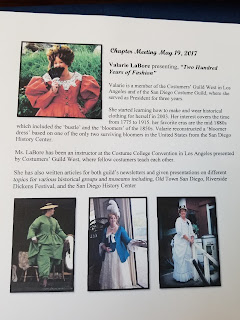 Time-jump six months later: my thoughts finally came together for a narrative of historical fashion and include a PowerPoint slideshow with lots of photos of extant gowns. I chose the beginning time to start in the 1700s since their group is, of course, about the Rev War. And I normally stop about 1910-ish, since my interests and knowledge don’t go much past there.


For a couple months I gathered photos from the internet for each decade, and began looking for information of how the styles changed. I’m a little more familiar with my specific eras of interest so I wanted to make sure I didn’t give out any wrong information on those. But I found I had a pretty good idea of most of them just from my experience with them, and seeing photos. 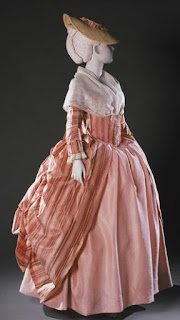 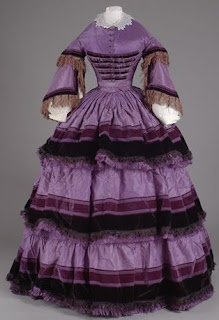 Come January, while having afternoon tea with a costume group, I was talking to my friend Tracey, who turned out had done a historical presentation to another DAR chapter herself. She said she had used a couple photos from movie costumes. light bulb!   I could expand on that and add photos from different movies and TV series that matched the different eras so my “non-costuming” group could relate the time period to a movie. So that began to expand my search. And of course I had to start with Claire from the Outlander series for 1740.

A couple of the decades I had a hard time finding a decent movie/TV photo for some of them, and couldn’t find anything for 1850. Fortunately, at the last minute PBS came out with “To Walk Invisible”, about the Bronte sisters, so I had one for the 1840s.
After helping my friend, Cindy, with her timeline presentation at a local San Diego historic home, we both had commented how interested everyone seems to be in what goes under the dresses, almost as much as what’s on the outside. I added that search to my list, and decided I would have all pretty and colorful dresses in my collection. I had to have a lot of them for each decade because I would be doing a collage of them on my PowerPoint show, which if you’ve never tried them, it’s a lot of fun! I actually had a lot more photos but could only get about 6 per slide unless they would be too small to see the details. 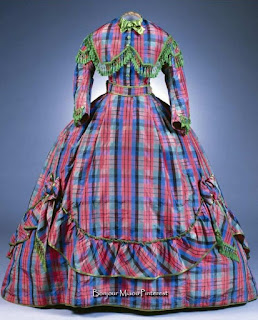 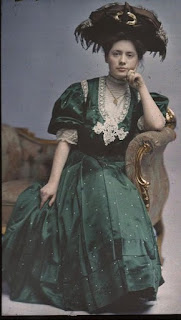 At the end of March into April I was up in WA state visiting my Mom, and knew I would have some down time I could work on my narrative for this, so I got as much of the slideshow done first, and got all the info I needed for the narrative because I would have no internet there, except for my cellphone, and even that is iffy due to only one cellphone tower in the area. I transferred everything to my laptop so I could work on it there, and when I was in desperate need of information, I was able to rely on a couple of my friends to do a little internet searching for me. Thank you!!!
I also included some of my own experiences in learning about the different eras, like Victorian versus Civil War; some funny and shocking bits to liven it up; and added some sharing of actual underpinnings I would bring with me.
As my narrative progressed, I added then edited out a lot of things because I had to limit the whole program to just 30 minutes. I decided to leave in some history of sewing machines, and the S-bend corset, but left out most of dispelling the corset myths, although after being prompted by the audience, I was still able to share some of that. 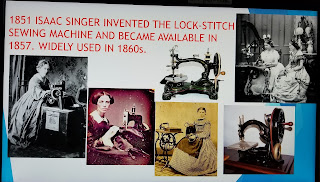 At Judith’s request, I kept in some of the story in the 1850s about the San Diego bloomer dress, and brought mine to display it. And then Cindy sent me a Regency cartoon to include in my slide on Regency dress. 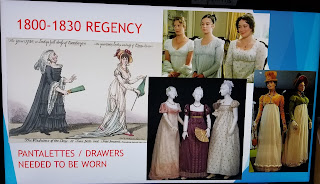 On one slide for I introduced them to Heather, and Truly Victorian patterns. 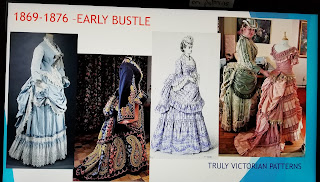 I ended up with a total of 35 slides, and could have done more if I had the time. But I needed to leave room for showing off the undies, and as it happened, I also was able to have two of my friends, Birda and Jeanette, as live models wearing their wonderful dresses. So with them and myself dressed, a complete Georgian outfit on one dress form, bustle and undies on another, and the bloomer dress on a third, we had quite the mini fashion show. 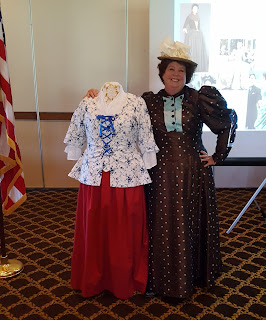 While we were setting up at the Admiral Baker Clubhouse in San Diego for their meeting and my program, some of the ladies began arriving and we were immediately getting asked questions about what we were wearing, and I realized this program was perfect for them. Some of them had a bit of knowledge but were a little confused on some of it. 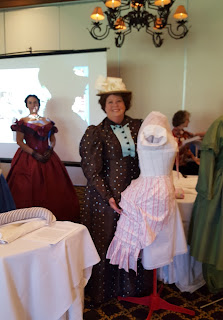 For my set-up, I had planned to hold my laser pointer in my right hand to point out particular slides, and also advance the slides. My left hand would hold my written narrative to read it. It was 17 pages, so this was nothing I could do from memory. However, I also had to hold a microphone. I’ve never had to use a microphone for this. I didn’t see any extra arms hanging from me, so it was a bit awkward at first. I apologized to the audience at my ineptness but they were so gracious about it and said I was doing fine. AND in my annals of “learning something new every day”, a few minutes earlier, one lady showed me how to use my remote for my laptop so I didn’t have to sit and poke at it to advance my slides.  After a couple minutes I finally held the mike in my right hand, narrative in my left, and poked the remote with my left hand for the screen. That worked great until I had to stop and hold something up, but my “live models” were willing to display most of the undies for me. 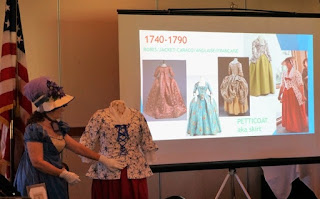 My introduction slide was a collage of movie/TV stills showing the different eras I’d be covering. Part of my focus would be the underpinnings that created the shapes they wore. 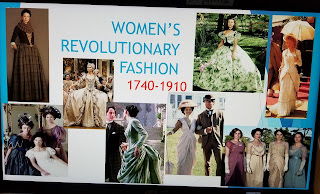 The idea was to make them familiar with the era by connecting it to a movie. I think it worked. 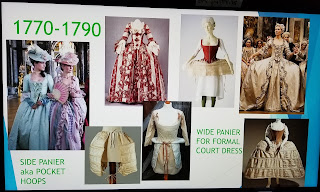 Both Birda and Jeanette were able to walk around the room and showing off their lovely dresses. Jeanette had just finished her 1860s ball gown and was rightly proud of it. Birda’s 1810 blue silk dress lit up the room. I was wearing my 1894 brown polka dot dress and had fun showing off the big sleeves. A funny thing happened when I came back to sit down at my laptop. I started to sit, then realized there was no chair. I was shocked. I looked around for it. What happened to it? Then I saw it sitting off the side where Jeanette had pulled it away so I could walk out front to show my dress. We had a quick laugh about that. 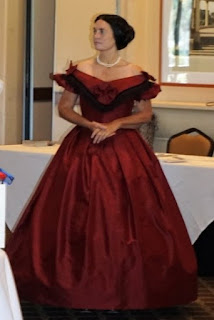 Coming up with my closing slide was the hardest to do. I’ve always had problems how to finish something, whether it’s writing or sewing. Hmm, that's the first time I thought of that coincidence. I decided to include a collage of historical men to admire us. I think they liked that slide the best of all of them. Yep, nothing like a well-dressed man. 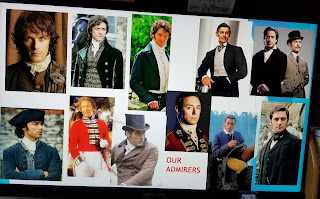 I think it was worth all the hours and months I put into getting this together, and I really enjoyed the response I got. The ladies there shared their memories with us of seeing photos of their grandmothers dressed in similar clothing to what I shared that day.


At the end of my program, I was presented with a Certificate of Appreciation from the DAR Chapter, and an honorarium. Both a first for me. 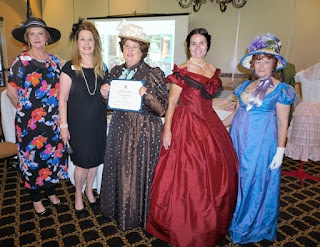 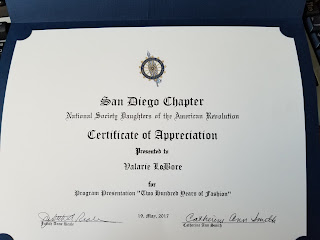 Now I'm on to my next project, a 1912 dress. It will require a new blouse, petticoat, and probably a new corset. 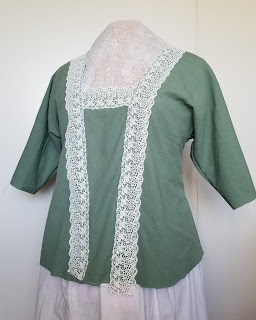 Posted by Time Traveling in Costume at 11:31 AM 9 comments: