All my events for the year are over, and my poor brain can’t focus on anything right now, so I probably won’t be sewing until after Christmas. Which, by the way, is today.
Right now I'm waiting for SharedBooks.com to send me a 20% off sale so I can have my last year's blog posts published as a book. *tapping foot*

OK, I lied. I have been sewing. But it’s just hand-hemming 18th century/1700s kerchiefs from a fine white cotton voile each night while I’m watching TV. I made one for myself for my Outlander dress, and since I had leftover fabric & enjoyed the hand-sewing, I made another. Then decided why not sell it? So, I posted it on a Facebook selling group, and it was grabbed within 30 seconds. I cut out two more, and left a message that if anyone wanted one, to put their name on the list. I got quite a few orders and since I’m finishing up the last two, I took a couple more orders. I’m not letting my fingers get rusty. I decided I’d better pick up some more of the fabric and found it was getting REALLY scarce. So, I’ve been driving to a couple distant JoAnn’s to buy the few yards they have left. Of course, none of them will ship it to me. 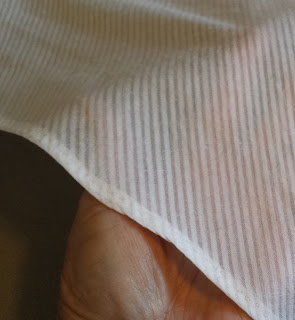 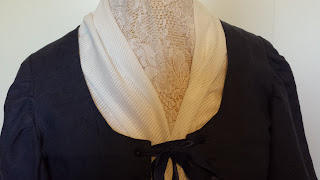 I began this year planning a new dress for the Riverside Dickens fashion show in February by pulling out an 1853 fashion plate of a gorgeous purple dress that looked like it would challenge my construction talents. And it fit right in to the “purple theme” of the show. 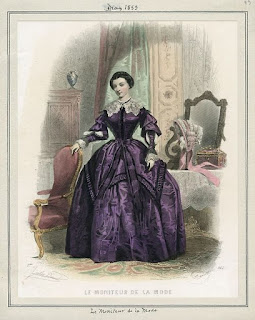 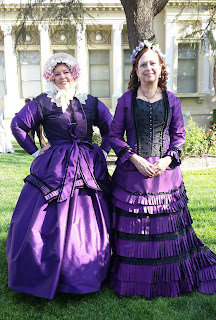 I was able to repeat wearing it in the fashion show at the Port Townsend (WA) Victorian Festival in March, where I also wore my 1885 Pink Polka Dot bustle, AND did my presentation on “Watches & How Women Wore Them” at the Festival. 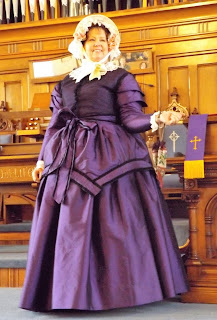 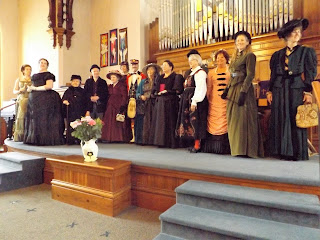 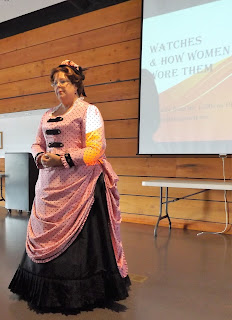 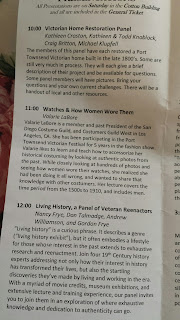 My next dress was going to be for an Edwardian tea aboard the Queen Mary ship in Long Beach. Again, I pulled out one of my favorite fashion plates from 1908 that I wanted to copy. I mostly Franken-patterned it from various patterns for the bodice. 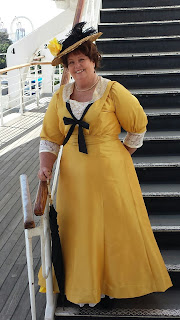 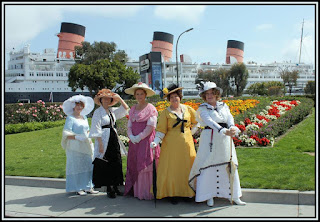 I “discovered” a new pattern company, Edwardian Rose, on ebay and etsy. There were limited printed patterns but were also available as a download and you printed them out. I was excited and willing to give it a shot, and even wrote up an easy how-to for my blog and to teach it at Costume College the following July.
This was the first pattern I tried where I printed it out. But when I got to cutting it out of the rose fabric I had, I found I didn’t have enough of the lace I needed for the neckline, and I couldn’t go further with the sewing until I did. As of the end of the year, I still haven’t found any that would look suitable so that’s on the back burner. I bought a couple more of her patterns so at some point I swear I’m going to make them. 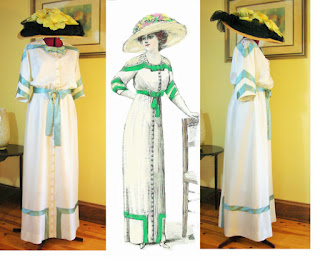 I finally decided my corset of 4 years was a bit shoddy and besides, it had green paint splatters on it. *Long story* I went to one of Shelley Peters’ sewing workshop weekends, and made a new one out of purple brocade coutil. Now I’m back in fashion. 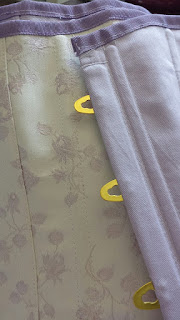 I seriously began planning my wardrobe in April for Costume College and finally finished up one I was really excited about; an 1870s tea gown inspired by a Frederick A. Worth tea gown. It didn’t cooperate as much as I’d hoped for, and some details had to be discarded. But the embroidered fabric made me swoon every time I handled it. And it lived up to its awesomeness when I finished it in plenty of time. 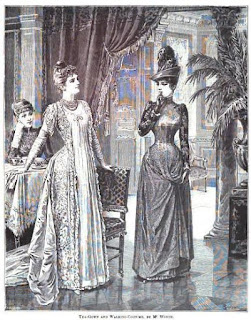 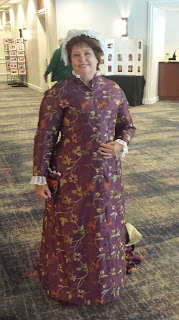 To save some time in starting a new dress, I finally gave in and finished my 1905 Directoire dress I’d started two years ago, after being inspired by a tiny little photo. It required a lot of tweaking on the vest but the blouse, which had already been cut two years ago, just about made itself. I wore it both to Costume College and later to a celebration at the Marston House in San Diego. 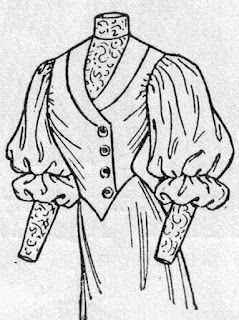 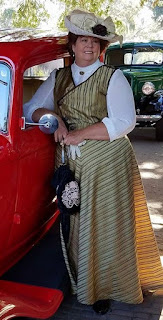 Another outfit I’d had on my planning table for a long time was this 1897 evening dress. The lace on the collar and sleeves was what kept me from going forward with it for a long time. But after buying a lace embroidered table runner at Costume College Marketplace, I knew at last I could give it a shot. I would have loved to make it from velvet, as the photo seem show it is, but my plan this year was to make the dress in fuchsia. I couldn’t find any fuchsia velvet. So, it became silk taffeta. I had to rush this in the last week and didn’t focus on the sleeves long enough so I’m not happy with them. Next time. Because it needs to be worn again. 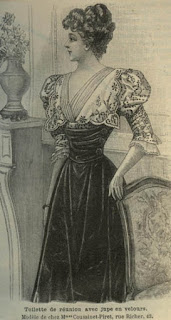 After becoming a fan of Outlander, I became excited about making a 1740s dress from it. When our Costumed Walkabout at the Del Mar Antique Show was given cosplay from movies or TV as our theme, it gave me a boot in the bum to get that made. I’m pretty happy with it, and now I have time to tweak it before taking it to Costume College next year. 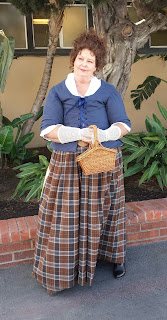 The only costume event I went to during the holidays was our Guild’s Holiday Dinner. I almost went to another event in LA but decided since the next day I would again have to drive back up there for a holiday tea with a friend, I decided that was too much. Tea with my friend, Martha, won over. I didn’t want to make a new dress for the Guild dinner, and my idea for years has been having something to wear for every time period, and then be able to wear them multiple times. I had a red & black checked dress I’d worn a few years ago, and just decided to dress it up a little more. It got a bit of white lace on the neckline, but also a new black fur hat. I was also going to carry my black Persian curly lamb muff I had bought last Xmas but when I went looking for it, I pulled out my black sealskin one and forgot I was looking for the lamb. Oh well, it was black. Now I need to find that lamb, and maybe put all my muffs together so that doesn’t happen again. 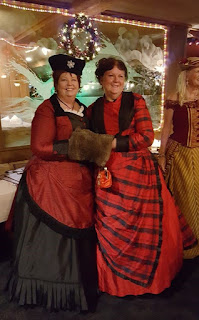 So as the old year is quickly fading into the past, I’ve been doing some planning and squirreling trying to decide what will be made next year. I made a list of what events I have coming up so I can better focus on what I should do first. Right now, it’s the Riverside Dickens fashion show and I decided the gown I had started over a month ago, will come first for that. I’m going to Shelley Peter’s sewing workshop over the New Year’s weekend to work on it some more. 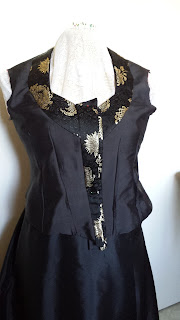 One of the outfits I’ve been itching to start is a 1912 jade green linen dress using Truly Victorian’s new patterns. 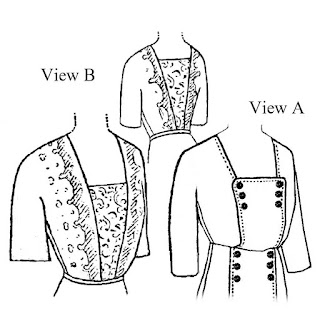 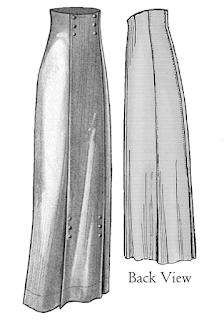 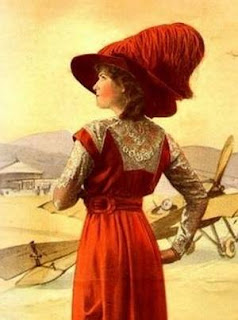 Since I signed up for Jennifer Rosburgh’s online sewing workshop http://oldpetticoatshop.com/collections/online-class-collection to make a new long line corset that I will need for it, I think that will come first. I just need to make a run up to LA for the perfect fabric. It really needs to be a stripe. 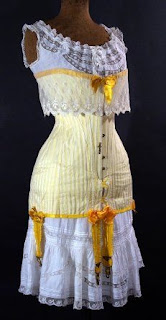 I have lots of other ideas in the planning stage but time and events will have to decide what happens next. Although I saw a truly beautiful 1795 open robe that will have to be made for Costume College too. And I REALLY AM trying to make things I bought fabric for already, and there’s a good chance that rose-gold changeable silk taffeta I bought in SF *blank* years ago, will be made up.

It looks like I made 5 new costumes, finished 1 that was close to being done, and 1 new corset. Why does it always feel like I didn’t make much?

As this holiday season winds down, besides my next wardrobe planning, I’m also planning my holiday tea for in January that I have each year for my friends from work, and some of my other friends. So, for now the cooking and baking continues and the sewing is on the backburner, besides those 18th c kerchiefs I’m still making to keep me from going stir crazy. 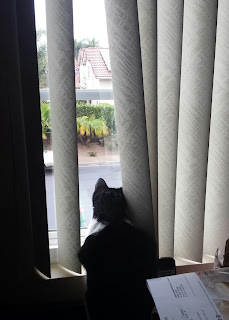 Posted by Time Traveling in Costume at 11:01 AM 1 comment: