September 28, 2013
On Saturday our guild dressed as authors and characters from books to help celebrate the grand opening of the new San Diego Central Library in downtown San Diego. We had been asked by the library to join in their celebration after hearing about our English Authors Picnic in Balboa Park.
Becca as Anne Shirley from Anne of Green Gables, Cindy as Beatrix Potter. 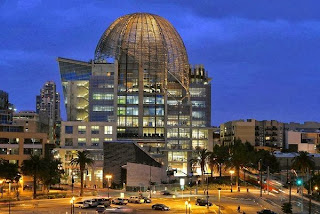 The new library was amazing, 9 stories high, with two levels near the top for a charter school. Some of those students were volunteers during the tours of the library. The upper dome looked weirdly like the Death Star from Star Wars. Looking at the above news release photo compared to the one I took from in front of the opening ceremonies stage, it doesn’t look like it’s quite finished. 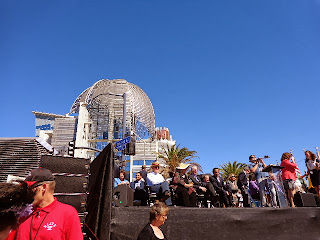 I originally had planned on dressing in 1860s from the book, Mrs. Lincoln and her Dressmaker, with my friend dressing as her dressmaker, Mrs. Keckley. But as we got closer to the date, she decided she would be unable to attend. So I figured I would just go as Mrs. Lincoln. But while I was on vacation, I started having second thoughts about how that would be a book people would recognize or be interested in with just me. So the week before the date I decided I would reprise my role of Miss Matty from the Cranford book by Elizabeth Gaskell. And it would be easier wearing it on the trolley with a corded petticoat rather than a hoop skirt. Later after finding most people there didn’t recognize me as Miss Matty, nor Cranford, I started introducing myself as the author, Elizabeth Gaskell, and talked about her other books of Wives & Daughters, and North & South. I was still upstaged by Louisa May Alcott of Little Women, and the witches from Oz, and Cinderella, the Mad Hatter & the White Rabbit, and the Red Queen. But I did get some excited squeals from some of the older crowd who watch PBS, or read English literature. Or even just compliments on my gown. But I think I need to find a favorite American author or book next time. Ooh, maybe I can be Nancy Drew next time. That was one of my favorite books series when I learned how to read. I took the easy way with my hair by clipping lengths of curls around the front and sides of my head, covering my head with a white cap, and putting my bonnet over it. I had a lot of comments on my pretty curls. And it was much cooler than wearing a wig since it was going to be very hot that day. 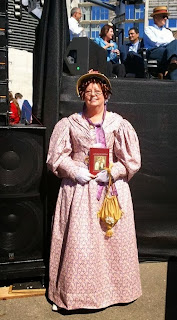 Holding my book of Cranford 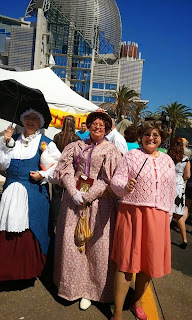 Lew as Mother Goose, me and Nancy as Delores Umbridge of Harry Potter
I road down there on the trolley with two of my friends, who did wear hoops, and took up quite a bit of room. We got a lot of attention from people waiting around, and especially from any children. The women were very interested in what we were wearing. Even the guys kept up a lively conversation with us the whole time. It was our first time trying the trolley and dealing with the ticket machine which wasn’t very hospitable. We got a lot of help from people confirming where we would get on and get off, and one guy even was our escort once we got off to get us to the library.
The streets were closed off for two events that day but lots of people were out, and there were booths from different civic organizations supporting the new library all around the block. We checked in at the loading dock of the library and the people there were so gracious and helpful to us, and made sure we knew where to go, and where to take care of any business; like pulling my chemise down in the back that decided it was going to be up around my shoulders. *Thank you, hubby for not mentioning that when you hooked up my dress.* I wandered around the streets a bit, having my photo taken, and running into some old friends. 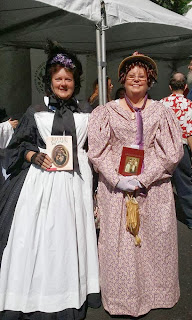 Shelley as Louisa May Alcott  of Little Women 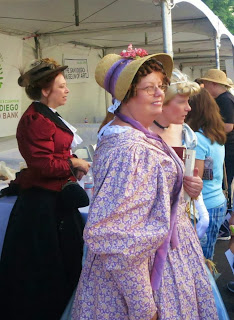 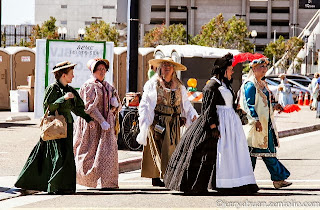 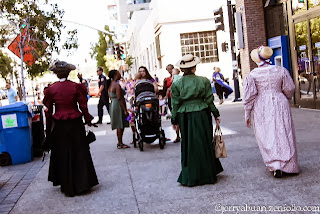 We were all told to attend the opening ceremonies out front with all the dignitaries making their speeches but after a half hour standing in the sun, we had to head back to some shade.
We waited around inside the loading dock until it was time to go in so I was able to take a couple photos of some other guild members. 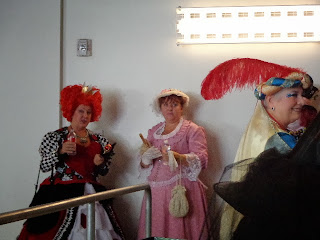 Gina as the Red Queen, Trudy as Josephine Earp & a Genie w/ her magic lantern 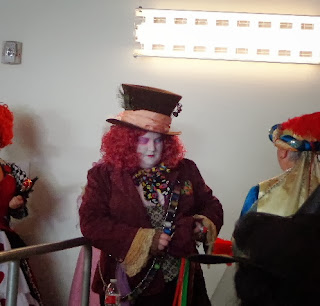 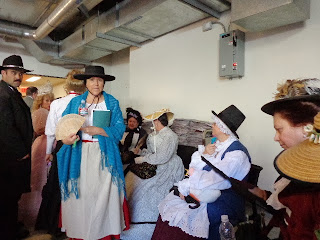 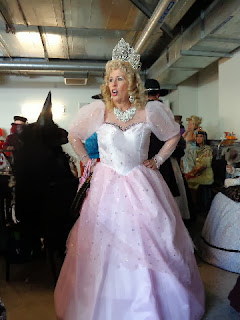 Debbie as Glinda the Good Witch 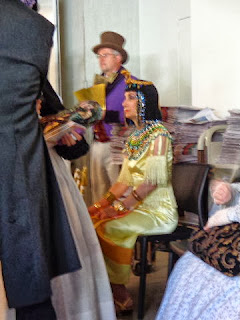 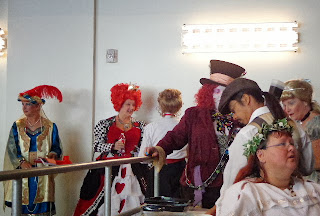 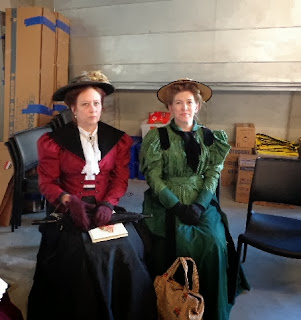 Cindy as Beatrix Potter, Becca as Anne Shirley of Anne of Green Gables 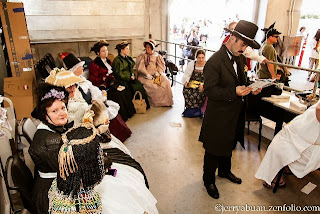 Our next job was to stand inside the library along the cordoned off areas for the line of people coming in to tour the new library. I think we were just as distracting as all the wonderful displays they had scattered around inside too. This is what the line looked like as it serpentined around the main floor. 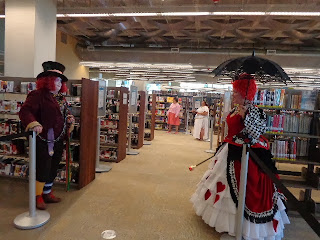 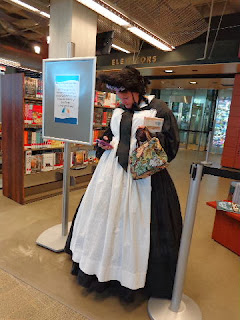 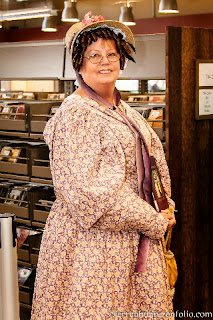 The people coming inside to view the new library were lined up outside for blocks. They started coming in about 11:30 and when most of us finally left at 3pm, they were still lined up around the building. Estimates were given of 15,000 people attending.
One of the displays they had inside was on women’s suffrage and they had some nice costumes on the models. The title was “A Moral Earthquake”. 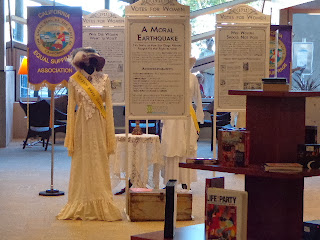 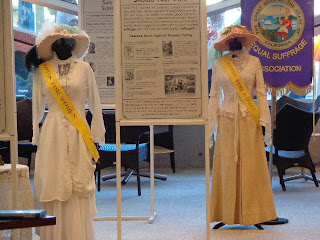 For lots more photos of this event go to Jerry Abuan’s gallery: http://jerryabuan.zenfolio.com/p779757638
Thanks to Shelley and Jerry for some of these photos on my blog.
Posted by Time Traveling in Costume at 8:08 PM 1 comment:

After a whirlwind 18 day tour of Paris, England, and London, I'm trying to keep the memories from blurring so I can write it all up in a totally separate blog from my costume one. I did write a daily journal with some details to remind me, and I took over 1300 photos! I didn't get to any costume sites :( but did see some at the V & A, and took photos of those. I even saw a few things there that surprised me. Finding antique shops was a joke. Unless you're extremely wealthy and like lots of jewelry, these places weren't what I was looking for. And their antiques are ancient to what we have here. Well, duh. The flea market I went to in Paris was dicey, as I was warned, but again too pricey. We didn't get into London early enough to go to Portobello Rd for their antique flea market but on recommendation, we did go to Camden Town's underground stables flea market, and that should be a tourist site in itself. However, that said, I did manage to find a couple things to bring home: a mourning bracelet, a skirt lifter, an ornate belt buckle, a straw boater, an Edwardian parasol and some old feathers. 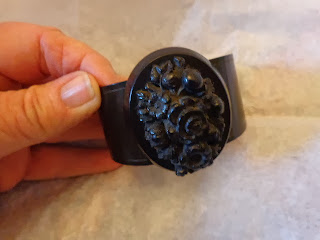 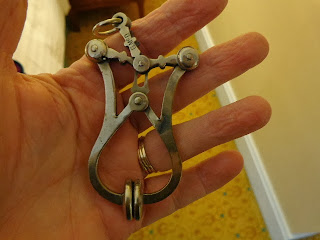 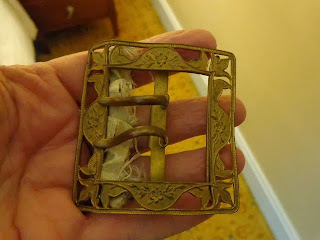 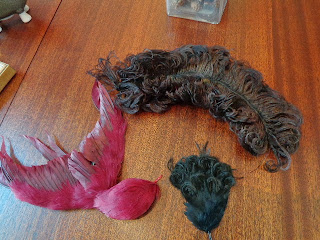 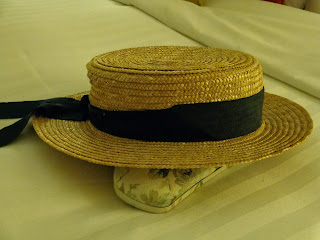 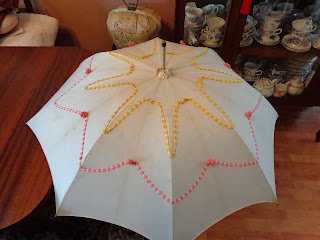 I've been working on uploading my photos to my online album, and starting to fill in more details for my new blog. As soon as those are done, I'll post a link to them here.
**********************
In the costuming news, on this Saturday many of our guild members are attending the grand opening of the new Central San Diego Library where we will reprise our characters from books but this time expanding to any books, not just English authors as we did at Balboa Park. I had planned on doing Mrs Lincoln and her Dressmaker, but my Mrs Keckley ended up not being able to do it, so I am going back to Miss Matty from Cranford in my 1830s gown. Since I have to take the trolley down there, I think this will be much easier to wear on it than a hoop. And I have my new corded petticoat to wear under it this time.

Posted by Time Traveling in Costume at 8:26 AM 1 comment: