OTHER COSTUMES IN THE WONDER WOMAN MOVIE 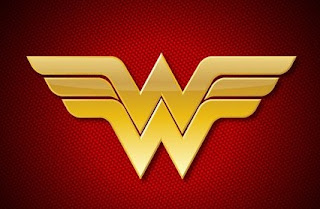 I’m running a bit behind in seeing the new Wonder Woman movie but I've been hearing chatter about the costumes among my costume friends for the last week. Not the amazing WW suit of “armor” she wears but the World War I-1916 clothing she and others are wearing in London. I just loved going to the dress shops with her while she shopped for modern clothing. She tried on, what, 254 of them, before she found something suitable to fight in. You’ll have to see the movie to get that.


I’m still not ready to try the triple tiered skirt outfit that looked gorgeous on her but even with her stick-thin body it added bulk to her. It hadn’t even appealed to me before seeing it on her. 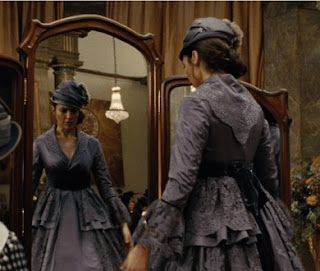 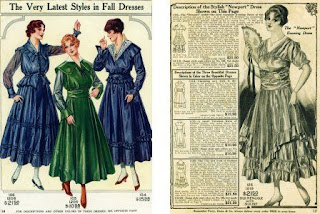 But then she came out wearing THE suit. I grabbed my hubby’s arm excitedly and said this is the suit all my costumer friends are talking about! 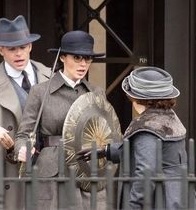 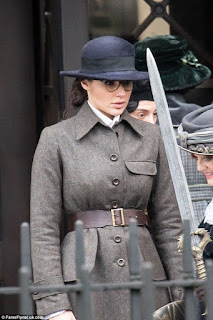 And this is the pattern that it can be made from: Wearing History’s 1916 suit jacket.  http://wearinghistory.clothing/1910s-suit-jacket-skirt-pattern-circa-1916/ 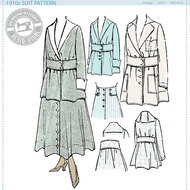 The drawings don’t do it justice until you’ve seen someone wearing the one they made from it. Some of my friends had already made this a couple years ago. 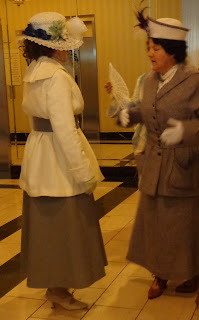 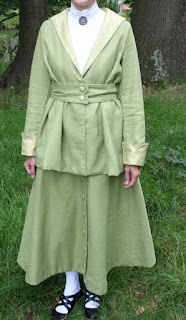 For info on this green one, read her blog here: http://misshendrie.blogspot.com/2015/09/the-new-fashion-for-1915.html
If you want to try making one, Wearing History even has a blog showing step-by-step directions on the different parts of it. http://wearinghistoryblog.com/tag/1910s-suit-a-long/
Then of course I started digging around for photos for inspiration of my own. Here are some originals. 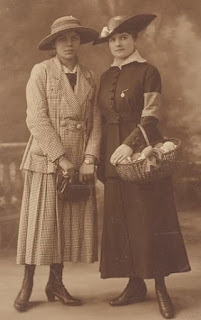 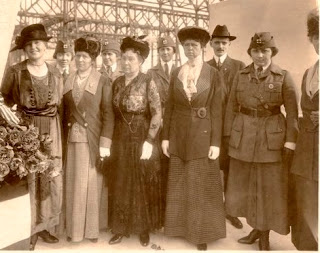 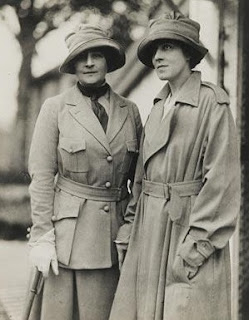 Earlier CoCo Chanel had introduced these softer versions of the same style. 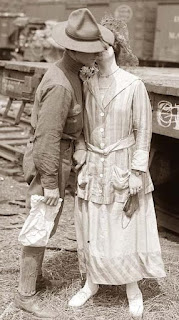 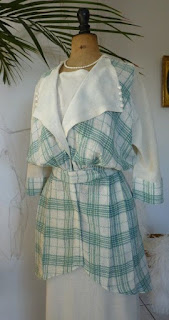 These two fashion prints are my favorites for what I’d like to try making; either the royal blue one, which the print is labeled Gabrielle Chanel, or the Kelly green version, from a paper doll book. 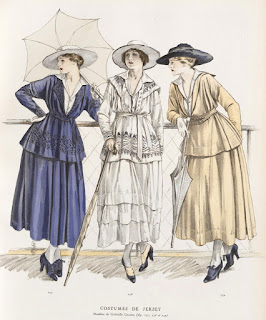 It looks like you could change the look just by the types of fabrics you choose to make it from. And they weren’t all solid colors. These fashion prints show stripes and combinations of colors.

Even some young girl’s versions had some interesting color combinations. 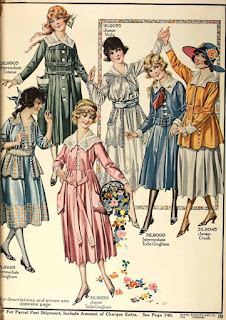 If you’re interested in other patterns from this same time period, check out Past Patterns but be aware these are copies of vintage patterns, with minimal directions, and some with no size variation. Start by looking at the ones beginning in 1915. http://www.pastpatterns.com/1900.html
Now go see the movie. You’ll be glad you did if you want to have some costume firecrackers going off in your head like mine did.
~~Val~~

Posted by Time Traveling in Costume at 6:35 PM 4 comments:

Many of my readers have attended Costume College in the past, so you may know what I speak of. For those of you not familiar with Costume College, it’s NOT a college, but a costume convention held in Los Angeles each year. Fellow costumers offer voluntarily to teach other costumers. No one is paid to teach, or run the convention. So, it’s highly dependent on all of us to run it. http://www.costumecollege.net/ 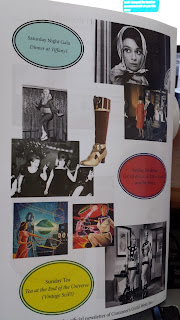 It’s three days of classes, with a few events thrown in that we dress in costume for. In between classes, attendees may wander the halls and the small Marketplace in costume. Each year the planners come up with different main themes, and many attendees frantically start planning their next year’s wardrobe to match that. In reality, no one really has to follow the theme. Many of us march to different drummers and do our own thing, or wear what we already made for past events. In the past few years, the attendees themselves have created their own “mini-themes” rather than follow the set theme. Someone comes up with an idea, invites their friends, or others that are interested, whether it be by word of mouth or media groups, and they plan and create. Many of them have shown up at the Friday Night Social, while others have worn them for the Saturday Gala. This is helpful also if you’re rather shy around people and you can be in a group so you feel part of it. You also have to be willing to follow the theme idea if you want to be with them. It may be strict on the guidelines or loosey-goosey.
One year I had put on a mourning fashion show at CoCo (Costume College), and decided the next year to invite all the models and others interested to do a theme from it. It didn’t have to be a mourning dress, but primarily black. I called it The Murder of Crows. That one probably had the most involved because everyone has something in black. 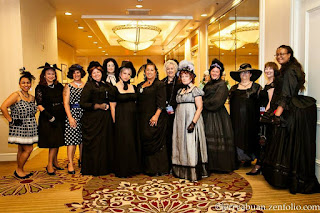 The following year I picked polka dots. But it was not a good year for everyone to get things going on their dress. I did get mine done, a pink polka dot bustle dress, and it’s been one of my favorites so far. I think a couple others made one but we never managed to get together for a photo, and I haven’t seen any photos of their own to add to this. 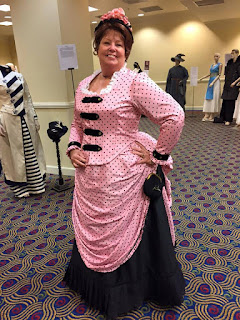 Last year I picked stripes as our mini-theme. Everyone loves stripes, as much as polka dots. I know there were some others who got their dress made, and we had all intentions of getting a group photo, but at some point, it all went to h*** in a handbasket. We started meeting out in the hallway outside the Friday Night Social room, and I heard a couple people say they were heading out to dinner first. Then I was told I needed to come back inside on the stage to be announced as the Assistant Dean for Costume College. So, we managed to get a couple quick photos of three of us, and that was it. Lynne and Karen also managed to get theirs to match the circus theme of the Friday Social too. Good coordination there, ladies! 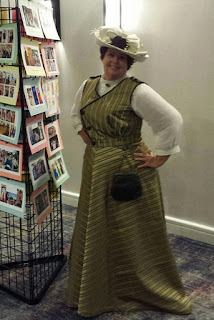 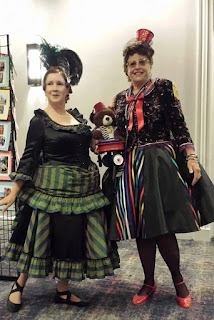 In the past few years I’ve gotten photos of some other mini-themes I saw, although I know there probably a lot more. I either didn’t see them, didn’t hear of them, or never saw them all together as a group. That’s the hardest part of doing this. There’s so much going on and getting people coordinated at a convention is rather like, you know, herding cats.
In 2013, a group of ladies all bought the same fabric and each did a dress in a different decade. I think that’s a great idea and lots of fun. 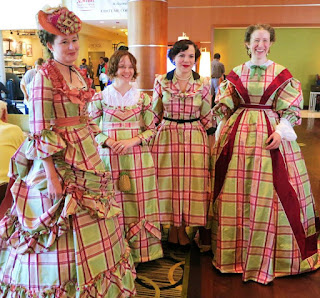 In 2014 Game of Thrones was a big influence on costuming, and these ladies did a great job of them. 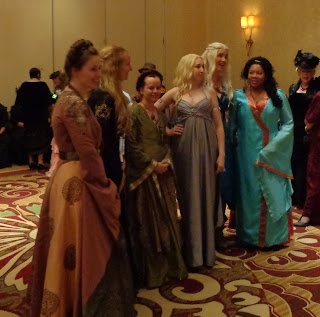 In 2015, persimmon was the color theme, again an open field of time periods were made here. 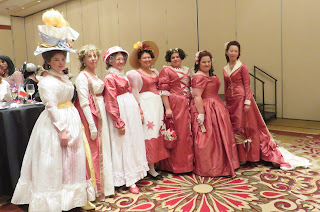 This year I’m part of someone else’s theme, and it’s kind of fun to sit on the sidelines with it and still have an outfit to wear for the Friday Night Social. We’re sort of following the theme for the Social, Casino Royale -My Favorite Spy, but quite an easy one to make for many of us. We’ll be The Ladies of the Pinkerton Detective Agency. We all will be dressed pretty much the same and easy to spot at the Friday Social. Just look for the red velvet vests. I finished my own outfit for it the other day except for hemming the skirt. So that’s out of the way at least. I’ve been reading about other people’s plans for their own mini-themes but I don’t want to mention them because they may like having it as a surprise.

My brain was already planning a mini-theme for something else after I was inspired by someone else’s dress. But I’ve been pleaded with to put it on hold for next year. That doesn’t mean I won’t be gathering my fabrics and planning, and maybe sewing it long before then. Considering we have less than two months before CoCo, it’s probably not a good idea for me to start anything new for this year right now. But I’m going to get as much done before next year because I’ve been warned I won’t have as much time to sew once I’m the Dean. All I know is, I need to look good because people are going to be staring at me. EEK! That’s why I like to be part of a group. I blend in. Oh, wait, no. I HAVE been a peacock quite a few times. So maybe I do like to get noticed. 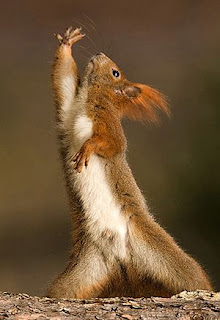 Posted by Time Traveling in Costume at 11:53 AM No comments: