“HISTORY TALKS” AT THE DAVIS-HORTON HOUSE

This last weekend I joined my friend Cindy for her clothing history presentation at the Davis-Horton House in downtown San Diego, across the street from the Horton Grand Hotel. She had been asked to do this for their History Talks lecture series, and she chose to do a timeline of dress and the understructures from 1800-1905.  She asked me to help her with the dresses and underpinnings, and talk about those. So I was her living mannequin.  This was written on the website for our presentation.
Changing Silhouettes Throughout the 19th Century: Clothing and Understructure.
Presented by Cindy Piselli and Valarie LaBore
The Gaslamp Quarter Historical Foundation is pleased to announce the return of it's popular "History Talks!" series in 2017. The first lecture will be Sunday, March 5th at 3pm at the Gaslamp Museum in the Davis-Horton House. Clothing experts, Cindy Piselli and Valarie LaBore will share their extensive knowledge on the clothing of the 19th century.
Cindy and Valarie are both members and past Presidents of the San Diego Costume Guild, as well as members of the Costumers Guild West. Cindy is also a member of the Victorian Roses Ladies Riding Society. Valarie has given a presentation on bloomer gowns at the annual ALHFAM conference in Williamsburg, VA. Cindy has co-lectured on fashion here in San Diego with author Garner Palenske, who wrote Wyatt Earp in San Diego. Both ladies have several years of experience producing and narrating historical fashion shows, and presenting lectures at events such as Costume College, and for various guilds and clubs.
Join us for an afternoon of fashion and history! Free for members, $5 general admission. RSVP by calling the Gaslamp Museum at 619-233-44692. http://gaslampfoundation.org/history-talks/ 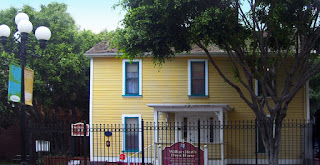 It was primarily a slideshow but we included visuals of dresses on mannequins, dresses on ourselves, and I showed samples of each of the underpinnings that she was talking about. We held it in the basement room of the historic house, and it was a nice cozy location, with about 20 people attending. I’d never been to this house before but had heard about its ghost tours, so I was excited to see the inside of it. It’s an 1850s Saltbox-style house, not a fancy decorated one but functional, and at one time was used as a hospital. More can be read about it on their website.  http://gaslampfoundation.org/the-davis-horton-house-1850/ 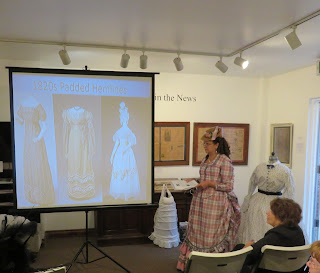 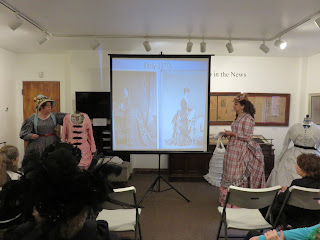 I wore the earliest dress we had a sample of, my 1835 teal and cranberry Romantic Era dress. On one mannequin (which were supplied by the museum and were extremely tiny!) I put my 1860s white and blue floral lawn dress, over a hoop petticoat, which we showed off. Cindy wore her 1870s pink and grey plaid bustle dress, and on the other was my 1877 pink polka dot dress. Each had their appropriate supports under them. I brought samples of stays (which the wooden busk shocked many of them), corsets, chemises, drawers, combinations, petticoats, bustles, & bustle pads. I also gave them a little background on corsets, and that they weren't instruments of torture, no ribs were removed. You know, that garbage. One of my friends, Vicki, from my water aerobics class had attended so I invited her up to try on a lobster tail bustle. Then we showed how easy it is to sit down in it. The ladies were fascinated by this one and later some came up to also try it on. 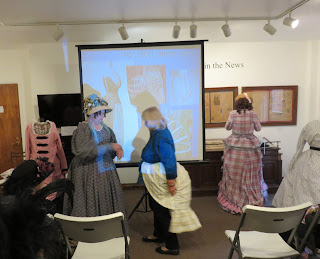 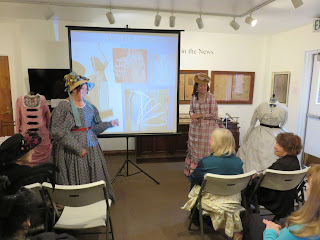 We’re starting to notice that many of the attendees to our fashion shows and presentations are fascinated by the underpinnings worn with the dresses, so we’ve started focusing a lot more on those. With having about 15 pieces of the different eras to show, it filled out Cindy’s presentation very well, and gave a good hands-on view of the actual pieces worn. I would have loved to try the hoop petticoat on someone but the poor mannequin wouldn’t have survived very well having it yanked on and off. If we’d had time, I probably would have tried putting a corset on someone too. That’s always fun!
~~~~Val~~~~
Posted by Time Traveling in Costume at 9:45 AM 2 comments: