Blinging up my caraco for Venetian Masquerade

Twice a year our costume guild does a Costumed Walkabout at the Del Mar Antique Show in San Diego. We’ve been doing this a number of years where we would dress in a different costume theme to entertain the shoppers. And of course, we shop there ourselves. We’re supported by all the vendors and get to win raffle prizes of gifts and gift cards to spend at the show that they and the producers donate to us.
Our theme for November 20 was Venetian Masquerade, and I planned to use my 1780s teal caraco and petticoat that I’d worn once at Costume College, but with lots of glitz and glitter added to it. 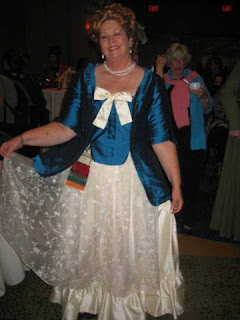 My caraco so far had pleated trim all around the edges & the sleeve cuffs, and looked very plain even the first time I made it. But I didn’t have time to take them any further before I left for the costume convention. So the only other decoration on it was a big cream silk bow on the front. I pretty much had a blank slate.
Because this was a fantasy costume, I had to keep myself from thinking “this isn’t historical” when I came up with an idea that clashed with period correct. I can’t believe how hard it was to get out of that mode. Even though I was wearing a 1780s gown, I didn’t have to stick to what was worn then. Unfortunately I came down with the flu and followed up with a cold the two weeks before our Walkabout, and my brain and energy went downhill. But I had a few ideas already and went with those.
My first idea was to hand sew crystal beads down the center of the pleating. But I didn’t like a straight line of them, so I sewed groups of 4, separated by an inch. In looking at the photo, they looked like a dotted line. 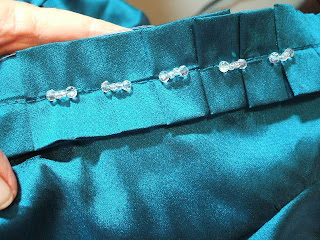 The next idea was to add pearls to it. I bought some strands of fake freshwater pearls and separated them, then sewed one between each group of crystals. They broke up the line and gave it more texture. 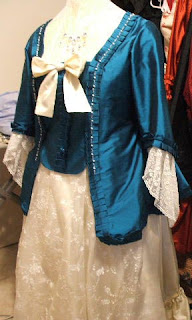 I had enough of the crystals and pearls that I was able to continue them down to the bottom of the pleats to the hem but if I decide to continue around the back & maybe around the sleeve cuffs, I’ll have to buy more. I also made a new set of lace flounces for the sleeves. At first I thought they were too long but after looking at pictures of some, I knew they weren’t. But my fears proved correct when I got BBQ sauce on them later.
I was digging through my costume jewelry collection for a brooch to use on a headpiece and saw a teal glass brooch that needed to be on the caraco so I put it on the back between the two pleats. The pin broke off while trying to pin it on, so I had to baste it on. 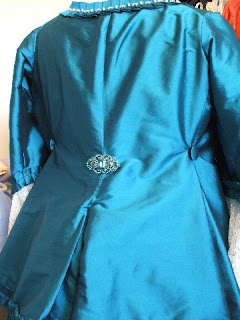 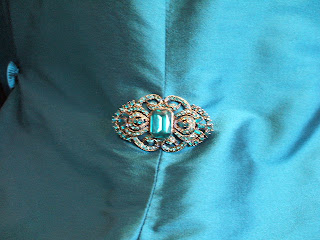 I had a freshwater pearl necklace that I wore with this last time but I wanted something that would hang in the open area of my chest. So I found a silver and glass rhinestone necklace at Icings. 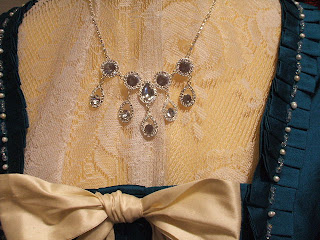 The only other addition I made to my costume was a headdress to wear on my wig. I’ve tried added feathers to my hair in the past with hilarious results (like a helicopter ostrich feather pointing in opposite directions every few seconds) so I bought a glittery silver plastic headband to attach them to. I only had two days left to complete this and had to resort to buying two ostrich feathers from Michael’s for $6.99 each, which really hurt, but ended up not using them because they wouldn’t lean over like I wanted them to. So I used two white feathery Xmas decorations I had and taped them to one side of the headband. While at Michael’s, I also bought a tall Xmas pick of large white pearls that could curl over my head, and attached that to the headband. On the opposite end I attached a piece of jewelry with a drooping pearl. I say attached, but that took some doing. First I used a white floral tape to wrap the feathers, pick, and jewelry on, but the tape was dry and wouldn’t stick. So I used Scotch tape around those but that wouldn’t stick. In the end, I tied thread around each wrapping, and it looks like everything held together because it all still looks intact after wearing it all day. Since my necklace was silver, I couldn’t wear the gold and pearl earrings I’d planned on, so I wore hanging double pearl earrings, and both my pearl bracelets. 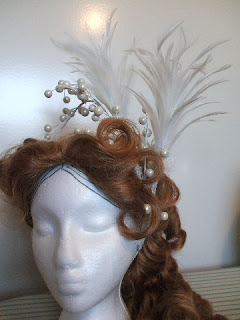 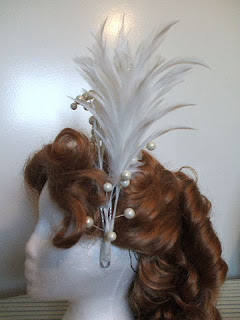 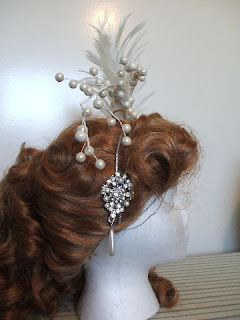 This is a photo taken with my camera at the event, and our group photo. Our photographer took a lot of pictures of me so I hope for more detailed ones later tonight. 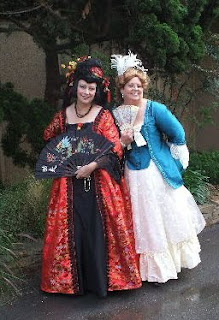 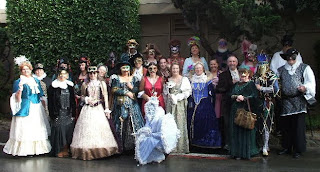 In January, we will once again be doing our Steampunk theme, which was so popular with everyone last January.
Posted by Time Traveling in Costume at 9:26 AM 1 comment:

The wearing of my Carmelite nun costume

Last weekend was the debut of my nun costume at the Felicita Park Renaissance Fair in Escondido, CA.
***EDITED TO ADD: I was reminded that I didn't include my inspiration photo of this costume. On a website about the Carmelite nuns was a photo of an older outfit that I liked the color on and wouldn't be the usual black and white that we're used to seeing. It also seemed to me to fit into a Renaissance time period with its earthy colors. 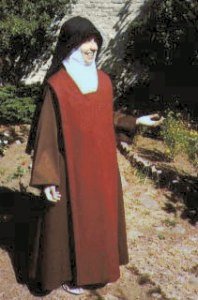 I still had to make a wimple to wear under the cap and veil but that didn't come with the pattern so I had to make one up myself. Since the only part that's visible is around my face and under my chin, I didn't need to do anything elaborate. I used a large rectangle of white cotton fabric, folded about 1 inch along one edge that goes under my chin, attached some white grosgrain ties at each end and tied that on top of my head. I pulled it tight enough to fit snuggly under my chin. Then I put on the cap, which the veil is attached to on the top, and used bobbie pins to attach the wimple to the cap by my temples. The bottom was tucked inside my robe. It worked really well but has a tendency to loosen up after time and gets a little baggy under my chin. But overall, it looks good.
When I arrived at the Faire, a couple attendants who were parking us asked was I wearing a costume, or was I really a nun? I pointed out that nuns don't wear makeup or lipstick. Later a lady working in a booth told me she was an ex-nun. I asked her how I did, and she said "spot on". So I guess I did a good job on it.
I had a friend of mine take some photos of me in our encampment where our guild displays costumes we've made to the public. Even though this was taken on Halloween Eve, the skeletons are our year-round models for our Guild's costumes. 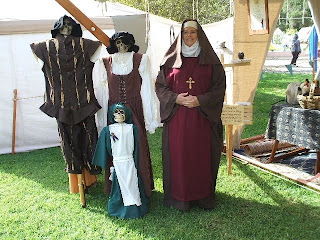 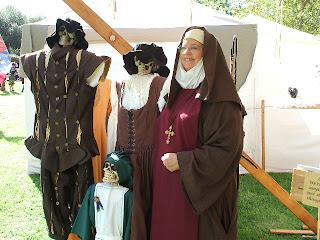 Posted by Time Traveling in Costume at 4:04 PM 3 comments: