Started May 2010
I hadn’t planned on making something new for 18th century just yet, but when an event at our upcoming Costume College came up, well, I just had to. After all, I couldn't wear the same thing as last season.
The event is actually the opening ceremonies for Costume College, and this year will be an Ice Cream Social with a request for people to wear their 18th C outfits that we might have made after last year’s 18th Century theme for the entire convention. A lot of classes were focused on that era.
I knew I wanted to make a caraco but I also wanted the skirt portion of it to be shorter. The longer length made my 5-5 height looked chopped off and stumpy. I used JP Ryan’s pattern, & I shortened the pattern by about 12”. I also plan to add the ruffle to the petticoat. 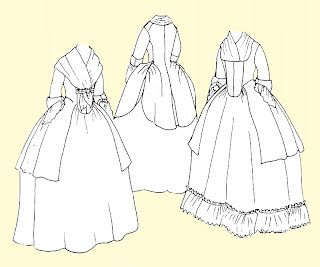 I had a hard time deciding what color of fabric to use, and saw a dark teal colored silk taffeta that would work. I also had a sage green and ivory embroidered silk that a friend had given me for making a pet en lair. But I opted to use it for a caraco also. Yes, once again, I am making two at a time. I’m hoping maybe they could use the same petticoat, and after asking for suggestions, ending up choosing an antique white. I’m not sure yet if that color will work with the green and ivory one, since the ivory is a little whiter.
So far I have the fabric bodices sewn together, and am currently sewing the linings together. I’m hoping to hand sew them into the bodices while I’m on a trip. 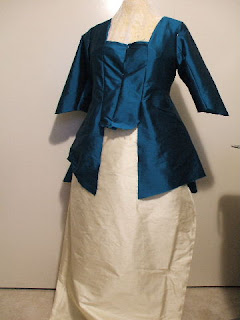 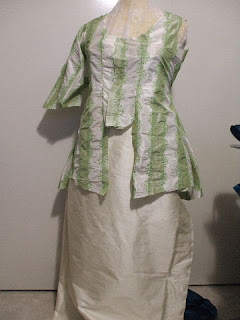 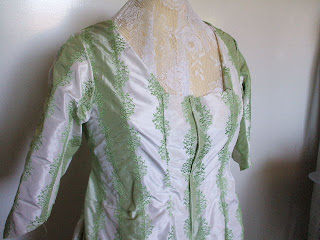 My plans for trimmings on the teal are a pleated ruffle all around the caraco’s edges, and on the sleeve ends. Maybe a bow in the center of the stomacher.
For the green and ivory one, I’m not sure. I’d like to use sections of the embroidery to emphasize it somehow.
Posted by Time Traveling in Costume at 10:58 AM 4 comments: