The Blind Leading the Blind—using your rolled hem foot

This is kind of what I’m trying to make; a multi-tiered petticoat for my 1853 dress. 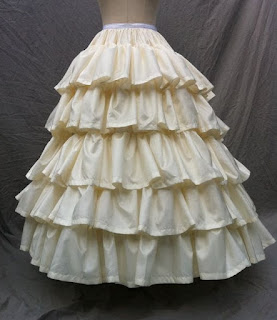 I really want this, with the high dome shape at the waist, but they weren’t wearing hoop skirts at this time yet. So they did it with multiple layers of petticoats, corded petticoats, and quilted petticoats. I needed to make a petticoat. 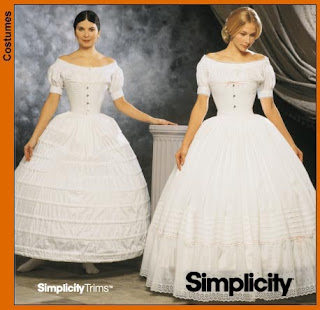 I just finished tearing multiple strips of cotton fabric in 7 inch widths to make my ruffled tiers on my petticoat, and after the dreaded endless ironing of them, it was time to start finishing the edges.  *bleh*
I always turn the top edge under a 1/2 inch that will be gathered and sewn onto the petticoat. The bottom edge I have to turn under and hem it. *double bleh* This usually means turning it under a 1/2  inch, ironing it, and turning that under a 1/4 inch, pinning it, and sewing it. That’s a lot. No wonder I was procrastinating on this. After a bit of whining on Facebook, one friend reminded me about using a rolled hem foot on my sewing machine instead of all that turning under mess. :)  I had one but I didn’t know where my instruction book was. So here you have my guinea pig attempt at using one without a clue. I taught myself how to do it in a couple minutes, with some cheering and hints from my fellow Facebook seamstresses.
A rolled hem foot: mine snaps onto the shank. There’s a little curled metal thingie that rolls into itself that your fabric is supposed to go into. You can see that better in the second photo looking down at the foot. 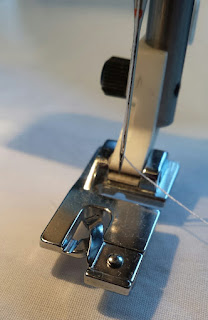 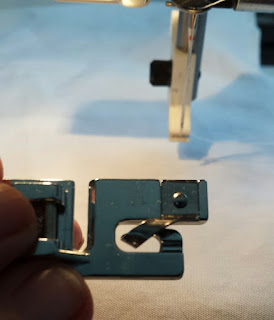 I would recommend trying this on a strip of your fabric first till you get the hang of it. I placed the foot down. First thing you notice is the needle is behind all this curling portion. So how does that right edge of the fabric get into that curling thingie, turn itself under, and back to the needle? Magic! 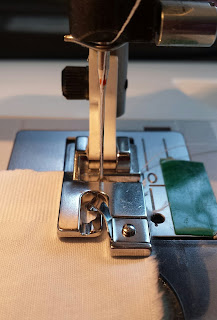 Ok, so you have to help it a bit. I’m turning under a 1/4 inch edge. The width of the right side of my foot is 1/4 inch. So I put my needle down into the fabric near the back to hold it (but make sure there’s enough fabric that it doesn’t jam it into the hole), then I lifted up the foot, folding that edge in the 1/4 inch and pulled it into that first curl. And it will be fiddly. I folded it just slightly over the inside edge of the left side, but barely because it will be too bulky if you go over it. Slowly start stitching, holding that 1/4 inch under with your fingers, and just lightly pulling the fabric behind the needle so it doesn’t bunch up. Basically what it’s doing is turning a tiny edge under with an even tinier edge under it, rolling it as it sews. 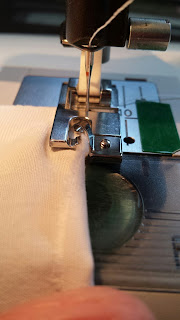 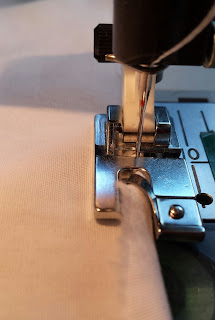 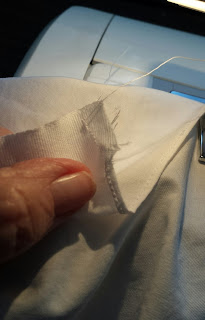 On my first attempt my beginning edge was a little rough. Someone suggested I try using another bit of fabric for the needle to go into that pulls the main fabric in. I was even sent a photo of directions from a book on clipping the corner first. 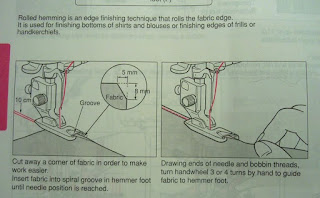 I tried those a few times with no luck. Another suggestion was to put the fabric in at an angle and push until it got far enough for the needle to catch. I got that to work but it was still a bit messy. But hey, those parts are going to be in the seams when I sew them all together, so who cares?
So here’s my first strip. A teeny tiny little hem. But see that bit sticking out from the edge? That’s what happens when my 1/4 inch gets a little too wide. It also makes my needle go clunk clunk because it’s so thick. But don’t freak out. It’s OK! No one’s going to see it. But if it really bothers you, get out your little manicure scissors and trim it off. 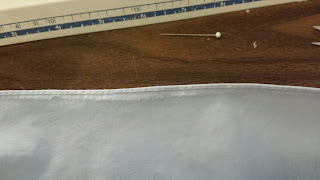 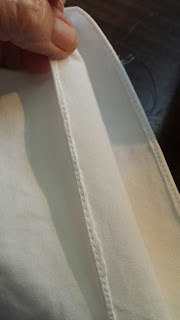 This is still going to be long and tedious, and boring, making all these tiers. And I’m procrastinating by writing this. I don’t know how many I have to make yet. I still have to measure the width of my skirt to see how wide to make the petticoat. My thoughts about how to sew the tiers on evenly is to lay the panels flat, draw a straight line in pencil of the rows across each one, then sew the side seams together, making sure the pencil marks line up at the seams. I’m hoping this makes it easier to sew them on. I know there’s a mathematical way to figure this out but I’m lazy, and I failed algebra. 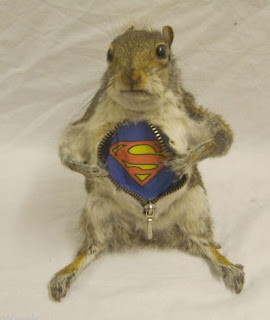