Have you ever had a moment where in your costuming creations that you have an inspiration that totally goes the other direction of what you intended? If you have a sense of humor, its even better. Some might say, even grotesque. But keep laughing.


Our 2019 Costume College seminar next month in Woodland Hills, CA, have a variety of themed events you can dress in costume for. Its your choice if you want to dress to the theme, or just wear what you already have. This year I’m pulling out a few things from my closet from the past and either updating them or adding new accessories to fit the theme. Having just recently moved almost 2 months ago, I’m still unpacking. I still can’t find my box of straight pins, or certain fabrics, so I needed to make this year easy on me. Quite a change from all the turmoil last year of being Dean of Costume College.

One of the themes is for our Sunday breakfast, “Good Mourning Sunday Breakfast”. That was easy, I have quite a few black mourning dresses I can wear. At the last minute I also was able to buy someone’s ticket for the afternoon tea, “Tea at the Haunted Mansion, which has been sold out for months. So I’m going to be able to wear the same outfit to both. Much easier than racing from classes and trying to change.
Last December I started planning my wardrobe and for the breakfast I was going to wear a black cotton 1870s dress I made in 2014 for Dia de los Muertos in Old Town San Diego. Minus the makeup of course because that will not last the whole day, or in the heat and humidity Los Angeles is famous for in July. I only worn it once more in 2015 for Tales of the Crypt in Riverside, CA. Time to get the dust off of it. 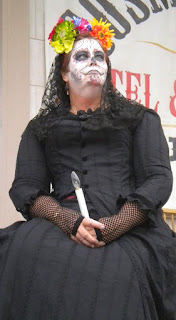 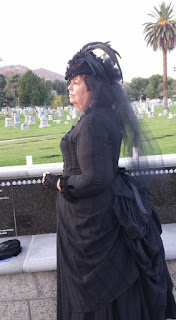 I didn’t think much more about it until a few months later and saw this Halloween yard decoration. I could have a prop! I always feel more comfortable when I’m carrying a prop, other than a reticule, be it parasol or sword. 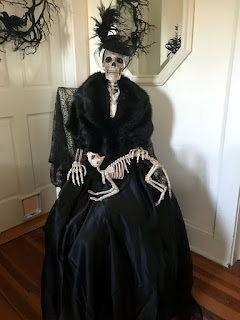 And wouldn’t you know it? Too late to buy any Halloween sales clearance items of skeletons. Trying to find one online was either out of stock or at regular price. So I had to bide my time until summer.


Finally, last month a larger variety of them was showing up on Amazon, and one friend pointed this little fellow out to me. 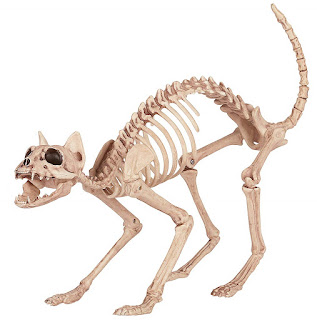 In conjunction of my love of cats, and following various Facebook groups, like Sewing with Cats, and Catspotting (both of which are great for lowering blood pressure and depression/exhaustion just looking at all those little kitties), I came up with The Crazy Dead Cat Lady.
And look, it’s Chloe-approved! 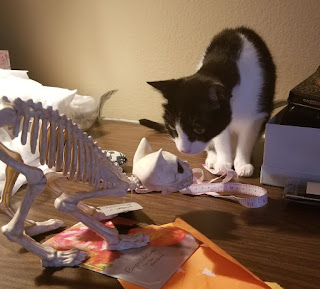 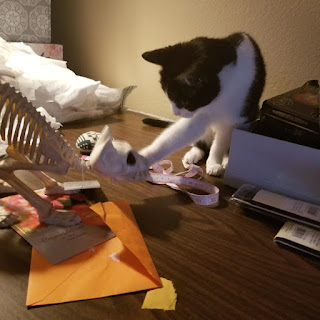 Its just the right size for sitting on my lap, and not too bulky or awkward to carry around. I actually think it’s the same size as Chloe, as shown here for comparison. 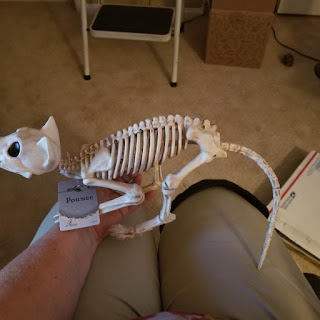 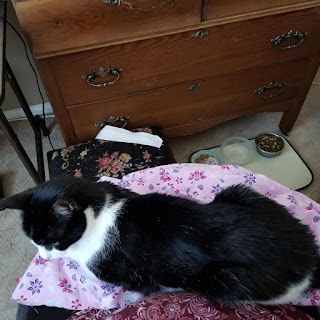 On to my next project. Only 30 days left to finish.

Posted by Time Traveling in Costume at 10:15 AM 4 comments:

I’m not totally back to sewing normality yet, as our halls and rooms are still full of boxes needing to be unpacked, but I needed a little normalcy in my life. With Costume College looming at the end of July, I just had to get going on the one dress I wanted to make, especially since I’d bought all the accessories for it, and fabric. Since the accessorized outfit will be a one-time wear, it needed to get made. My dress, however, is going to be able to be worn in in the future. That’s my thing. I won’t make a one-time only dress, especially with all the work and money that goes into it. This is turning out to be fun.
There are many theme-inspired groups on our Facebook page, and the one I liked was “Once Upon a Bustle”, a Disney-themed idea. Any bustle dress but made to follow a Disney character. My friend Cindy was originally going to be Cruella Deville from 101 Dalmatians. Since I had been saving a dress for inspiration, although from the 1890s, it gave me an idea of doing a “Dalmatian bustle”. I’d still like to make that 1890s dress someday though. 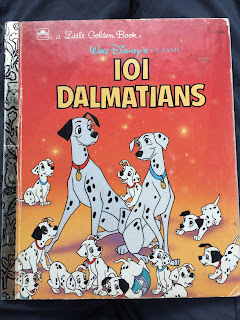 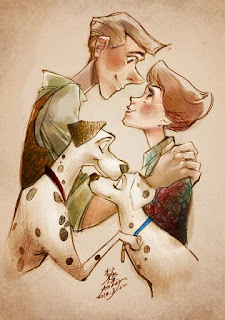 Prior to our moving, I got really industrious and came up with a plan to make my own dotted fabric since I couldn’t find any in the stores or online that were a light weight, like voile or linen. So I started planning on stamping quarter-sized dots on my fabric. I looked through my swatch book from Costume College for the linen that I thought would work, and decided on an Irish linen, which I bought from Em-Bee Fabrics in the LA Fabric District. 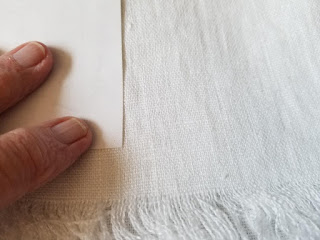 I did a lot of questioning from friends what the best paint was to use for this, and bought one bottle each of DecoArt Americana & So Soft black, and a bottle of Ceramcoat Delta Textile Medium. Both worked the same with the textile medium, although the Americana is cheaper. I bought a set of foam cylinders to do the stamping with and picked the quarter-size one to use. 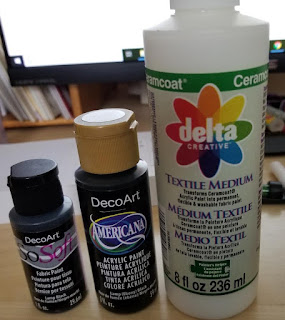 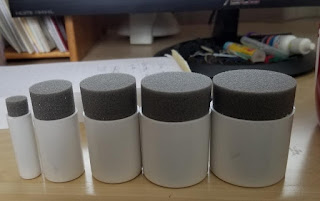 I had 10 yards to stamp dots on so it was going to take a LOT of paint, and a LOT of time. Then I had to decide do I cut the pattern first, then stamp, or stamp the fabric, then cut? I decided on cut first. Before stamping, I did a lot of testing on strips of the fabric. I started out using too much paint, then not enough. I was getting worried, and I didn’t want to ruin my expensive fabric.

For one week I was having the inside of my house painted, and I *thought* this would be a good time to find a corner and just stamp away. But in reality, it was so chaotic here, that I couldn’t even concentrate, and I would have to keep being moved all over. So I gave up and binge-watched Game of Thrones from the beginning. Yeah, I’m bad. I’d only seen the first 3 seasons, and now all 7 seasons were over. It had been so long since I’d watched it, I decided to start at the beginning. And this time it made more sense and I was able to get a handle on all the wonderful characters.
People started posting about how many days were left until Costume College began. But I couldn’t get up the enthusiasm I’d had before to do all that stamping. And then I’d still need to sew it. *sigh* I still wanted this to happen though. I went back to look at some links Cindy had sent me from Amazon for fabrics and most were either too small of dots or a stiff type of fabric. I finally found one that was a cotton-polyester for $4 yard. I ordered it on a Monday and it arrived on Thursday!! It was so soft and perfect! 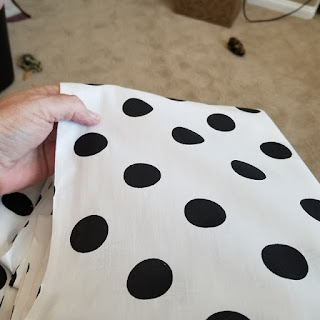 Now some pressure was off. But I still couldn’t get to it because now I had to put my house in order after all that painting. It seemed like every time I emptied boxes in the hallway, hubby would bring more in from the garage. It was like a reverse Black Hole.
Meanwhile I decided to run away from home one day and went to a sewing workshop for the Dress a Girl program that Shelley Peters hosted. After hearing that the older girls just wanted long skirts, I had bought about 6 fabrics at the Walmart $3 sale and worked on my first one. Then over a week’s time I got 7 of them done. But now the serious sewing needs to begin. 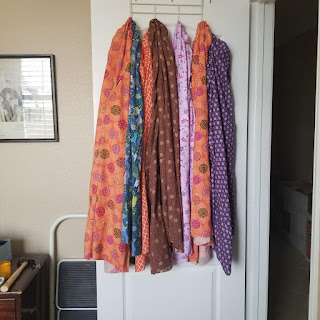 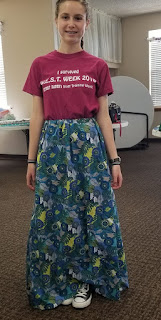 This last week I finally began to feel a little less stressed, and laid the fabric out to be cut. I still don’t have my new cutting table assembled. Its in the garage somewhere. So I used my dining table. It still took about 4 days for me to get around to start cutting it. 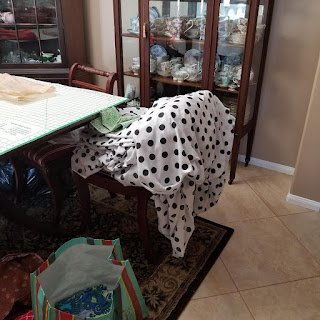 I’d say I have about 35 days to work on this, especially since it looks like I might have to make a pair of 1920s white wide-leg pants to go with a Miss Fisher outfit I want to wear for the Miss Fisher Murder Mysteries theme day. I made it even easier on myself with that and found a gorgeous long yellow knit jacket to use for it.  I just wished I could find the pants to buy. I’ve never made pants before, and my hip-hugger ones I made in class in high school doesn’t count. I have a black pair, and if I’m able to finish the black and white jacket I started, I would have a second outfit. Or just wear a teal knit jacket I have. Hmmmm… less work…. 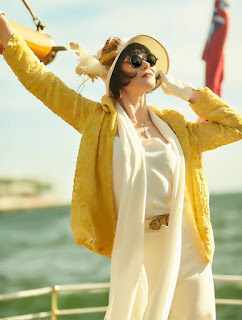 Back to my Dalmatian bustle: I wanted an 1870s polonaise that closed all the way down in the front and it seemed the easiest thing to do was use a previously-made pattern and shorten the polonaise, Truly Victorian #410. And I liked the style of the dresses from the series, The Buccaneers. I even have enough fabric to make a ruffle around the bottom. 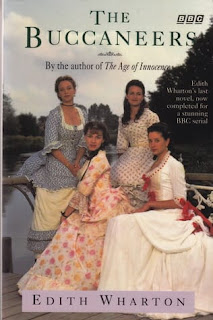 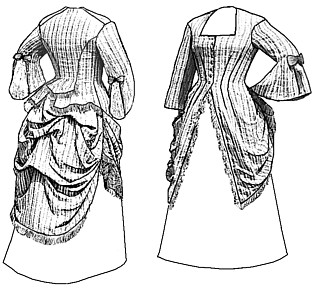 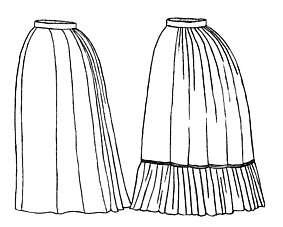 Cutting began this weekend, and once that is all done, the sewing should go together pretty fast since I’ve made this about 5 times already. The accessories are what’s going to make this a Dalmatian bustle. Using the pictures from the book, I’m going to have a blue belt around the waist, and make a “dog collar” like Perdita's of blue ribbon with a small gold medallion I hope I can find at Michael’s. 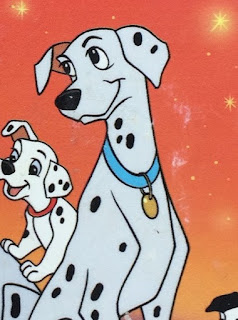 Dog ears! I found this on etsy. Its cheap, and nicely made, and perfect for a one-time costume. A few months ago, I found this Disney Dalmatian stuffed animal for sale on ebay. So if its not REALLY obvious just what I am, LOL, this will help. 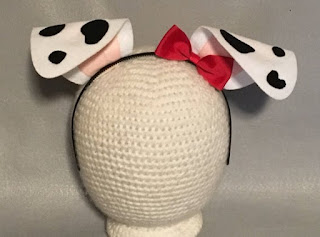 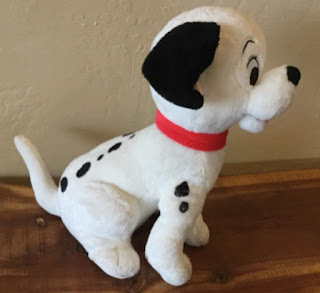 And if I have time, I bought some of this Disney Dalmatian fabric to make a simple tote to carry my class things in. We’ll see if that happens. 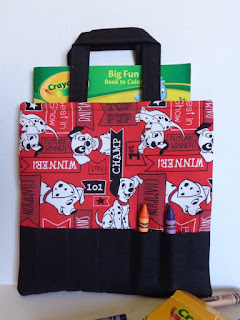 *Yesterday I got the skirt sewn together. But today I need to unpack some more boxes, so stay tuned.
Chloe, “Queen of the World”, surveying her domain. 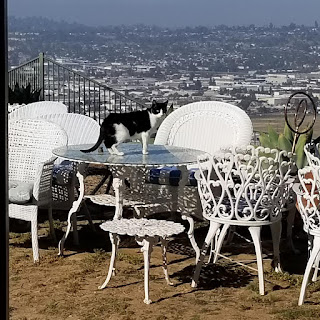