SEWING PROJECTS AT THE BEGINNING OF JANUARY

Getting started on my sewing projects had begun at a very slow pace, at least I think so. I had a couple dresses cut out and started last month but had to set them aside for a while. Going into the planning mode for Costume College began on January 1 but it wasn’t sewing my dresses. It was the planning FOR Costume College, aka running it. In trying to work on the budget, I discovered I’m not good with numbers. Letters, yes, but not understanding spread sheets, etc. It took a few weeks to get it together, which included more grey hair, meltdowns, and a couple sleepless nights. But that’s done. I do have an idea of how to make that aspect better for the Dean for next year though. But the fun part has started of designing the covers for the Registration and Program books, and all that goes in it. 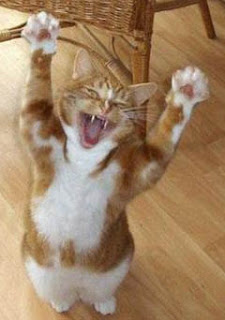 Once the stress level went down, the sewing mojo moved back in. I pulled out my two Regency open robes I was going to make to wear during the daytime at Costume College, and whipped those out pretty fast. I used the Butterick 4890 pattern and altered the front of the robe to create a front closure so it was all one piece. My peach and fuchsia linen-blend fabrics came from L.A. Fred’s in the Garment District in L.A. Unfortunately, one of them was shorted by 2 yds so I had to so some creative cutting with it. I think the only difference ended up being the fuchsia one is shorter in the train. Lesson learned: don’t walk away from the counter, and pay attention to the measuring, because I also got double of the peach and ended up selling that to someone later. 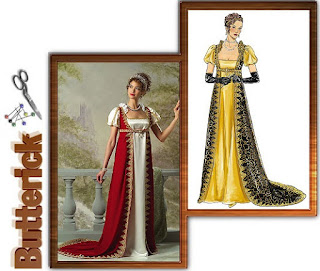 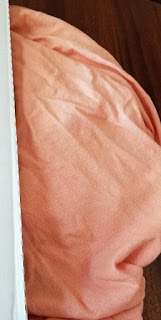 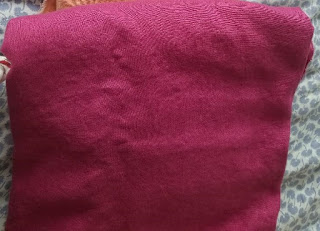 Right now, they don’t look very fancy, and probably won’t be because they’re meant to wear in the daytime but the Squirrel in me wants *something* fancy on them. I just don’t know what yet. I’m open to suggestions. Anyone?
Both are sadly displayed on my dress form over an older white Regency dress because I have a Victorian corset on it so the shape is wrong. They will eventually have buttons to close the front tab.

In the meantime, I needed to get a new petticoat to wear under my sheer white dresses for them, and just whipped out the skirt and added a waistband with straps. It doesn’t show up well on top of the white dress here though. 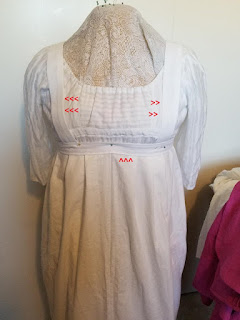 I still need to have someone fit the straps on me so they’re the right length and therein lies another problem. A few months ago, I bought custom-made Regency short stays on Etsy. She made it according to my measurements, and has lots of great reviews. Its very well made but when I put it on at first, the shoulders were too wide. So, I was going to do a quick alteration of that, even though the maker was willing to do that herself. When I put it on again the other day, I laced it tighter and seemed to work but every time I raise my arms, it slides up. And the girls go down. There’s no gusset for them to sit in. It makes me flat as a pancake and no poof up top. There’s nothing to support the girls from sliding down, and even adding some little “cutlets” or supports on the stays won’t keep it from sliding up. So, I’m going back to Plan B and wearing my bodiced petticoat, which does give me a nice poof.
I just went back online on Etsy to look at the stays I’d bought, and this may have been an error ordering on my part. The first photo is the one I purchased. As you can see, its flat with no gusset. The second one may have been the one I should have purchased. Unfortunately, too late. 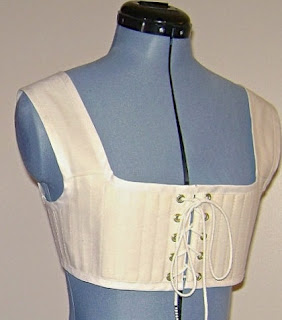 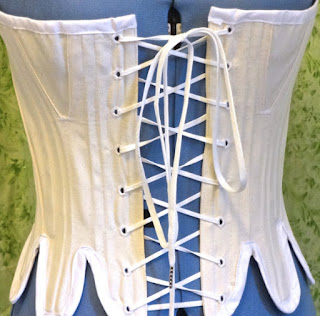 I have two white cotton voile Regency dresses cut out and almost all sewn to wear under my open robes, but the back of the bodice is too wide. This was while wearing the short stays so before I do any altering, I have to try it on with the bodiced petticoat I made a few years ago to see if that made a difference because I’m pretty sure this is the same pattern I used for the dress before, and I know I haven’t shrunk that much.
Now that’s been put on hold because I’ve been distracted by needing to finish an 1890s suit I want to wear to the Port Townsend Victorian Festival on March 24 in WA. The skirt (Truly Victorian #291 Walking skirt) was sewn a few months ago but the bottom of it has some issues with an uneven hem where I didn’t notice a chunk was cut out on the back side of the fabric when I cut out the pattern. Fortunately, the Ripple jacket (Truly Victorian #496) is already cut and flatlined. 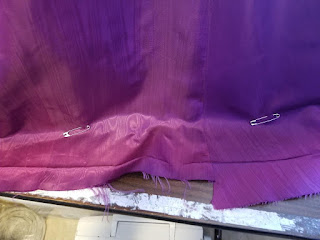 Over the weekend I pulled out the entire 1890s outfit and got to work on it. The first thing I did was try on the skirt. It seemed awfully long on me. In fact, it looked like I might be able to just cut off that uneven length around the hem. So, I took height measurements off myself, marked my guide on the door frame, then lined up my dress form to it, and adjusted the height. It was off, probably due to the last time I had to haul it to a presentation. Then I put the skirt back on it, and yes, it WAS too long. I set Sunshine up on my sewing table and began marking the hem level with the table top with safety pins. 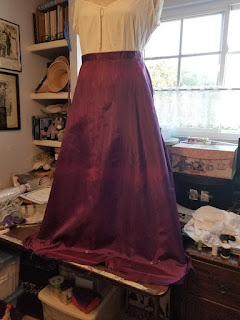 It looks like I can cut off 3-4 inches off the bottom with still leaving a hem allowance. Awesome!! My original plan was to sew a piece of fabric onto the hem to fill it in, then cover that seam with a row of black velvet ribbon all around the hem. There’s no need for that now but I am still going to sew two rows of black velvet around that and do coordinating trimming on the jacket with it too. I just got a steal of a deal on eBay for 9 rolls of black velvet ribbon for $6.50. At 2 yds each, that gives me 18 yds to work with. But I first want to see how the width of 7/8 inches works. If its too wide, then I’m going for a bit narrower. But this is still a deal because this width is very hard to find nowadays. 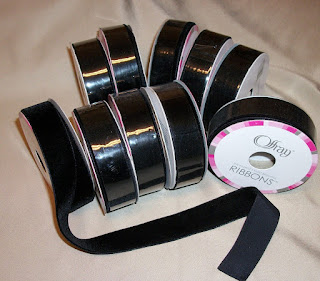 Next, I got started on the Ripple Jacket. It’s flatlined with black, so when the lapel folds out, you see black. I haven’t decided if I’ll make the lapel black or the matching purple fabric because I want to use more of the velvet ribbon around the jacket. It will have to tell me that when I get there. 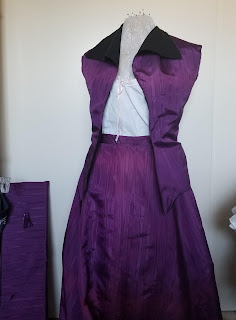 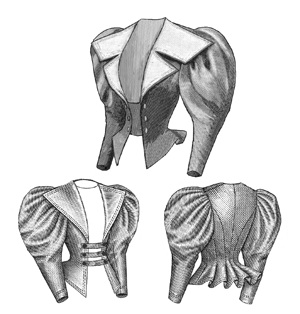 I started sewing the flatlining in the humongous sleeves last night and then realized I’d forgotten to put my two layers of stiff netting in them. So off that came, back to JoAnn’s to buy some netting, and finished sewing the sleeves.
Today I hope to shop for my solid avocado green cotton to make the blouse for this. I’m copying this fashion print, and will be using this Vintage Pattern Lending Library #672 (VPLL) gathered front version. Now you can see where I got the rows of ribbon trim idea from. 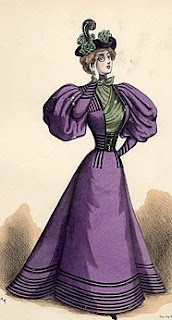 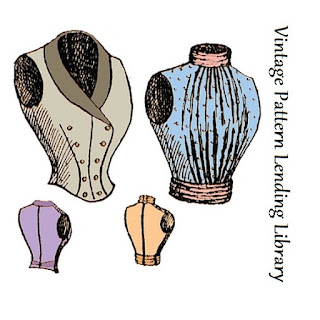 I’ve been doing some research on the kind of hat I’m going to use, and its’ going to be a small flat one. I have some straws but they would need to be covered. There’s also the possibility of just using buckram. I want big trims on it too. This will not be a shy hat at all. People will see it coming before they see me. 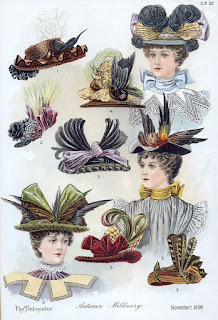 Posted by Time Traveling in Costume at 10:10 AM 2 comments: