Started March /Finished Oct 2012
I first started making these Civil War dresses last March on my handcrank sewing machine at a reenactment. I was asked to make some for a sutler’s booth to sell them. I only got as far as sewing the skirts and growth tucks with all the questioning from the public I was getting. And I was enjoying that. But once home I had big girl clothes to make and they were set aside.
In September I made a trip up to Washington to visit my Mom for two weeks, and knowing I was going to have some down time I thought this would be great to finish them. So I brought the three with me I’d been working on. I was using Simplicity 4737 and was also going to try Elizabeth Stewart Clark’s pattern #250 (1850-65).  After questioning a few Civil War reenactor parents, I found their preference for sleeves are the pagoda style. 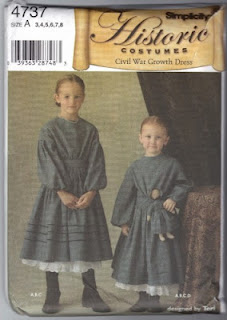 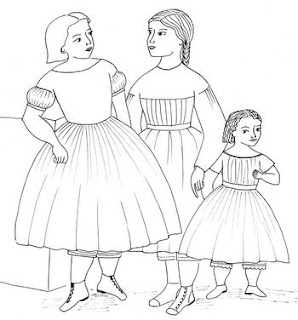 I found a couple fabrics for $3 a yard at Walmart that I thought might work, and then started looking online for photos of extant dresses and photographs of little girls to see what fabric designs would work too. I wished I’d done that first because my first two fabrics aren’t bad but they remind me a little more of 1850 but it’s not impossible that they would have been used that long. 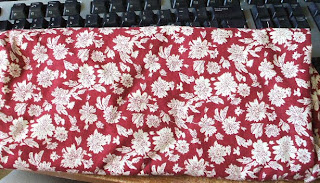 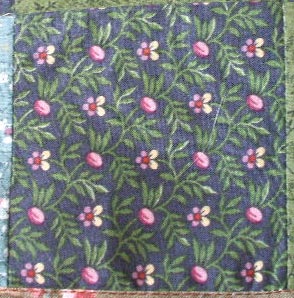 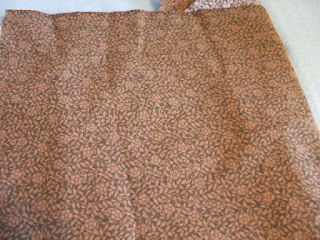 I loved some of the adorable photos of little girls I found, many on ebay. I didn’t even think of using plaids until after seeing some of them. And polka dots work too. I saved pictures of the fabrics of extant gowns too and most were tiny little floral prints, not unlike what we see in the stores today. 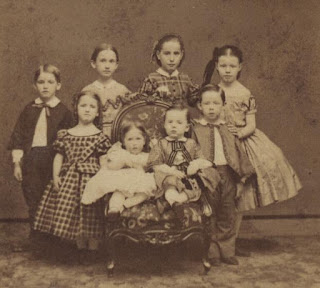 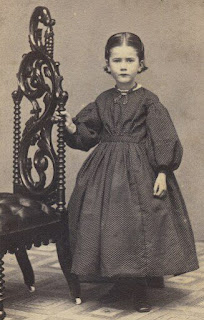 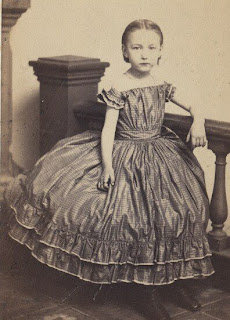 While I was visiting my Mom I checked at their Walmart and found these two blue fabrics on the clearance shelf. If they had more I probably would have bought some for me but they had barely enough for a little girl dress. 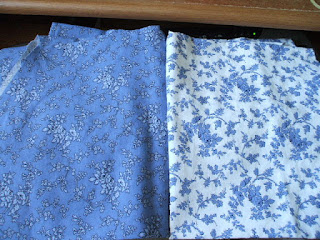 The first three fabrics were cut out of the Simplicity pattern, and the brown out of the ESC pattern. Having no children of my own, I have no clue what sizes are for what ages, so I’m dependant on what the pattern told me. I even stopped one lady in an antique mall with her daughter and asked her age so I could get an idea of what size she might wear. I tried very hard not to look like I was stalking them.  I did find this skirt length chart that I thought might be handy that shows the ages and the length it should be.

Of course I cut and sewed these on my “assembly line method”, and as I made them I found some shortcuts and a way to use less of the fashion fabric. Both bodices required you to cut out two and allowed enough fabric for that. After doing two of them, I thought that was wasteful and from there I started cutting the lining out of a plain less expensive muslin I had. Also the waistband requires cutting two, one for the outside, & one inside that you slipstitch on top of the outside one. It’s not much fabric but the time saved of not putting it on the inside was worth it. I was told the sleeves on this run short so I added 2 inches to the length plus it has the growth tucks that can be let out. The skirts also had two growth tucks on them.
The Elizabeth S. Clark pattern is made a little differently. The patterns aren't really sized and you sew it to fit your little girl. Without having any measurements to fit it to I had to make it the largest size it came with. Supposedly you gather the neckline in to fit the child and I didn’t realize that until after I’d already sewed the lining to it. So I just took a couple tucks in the neck. It has a very wide neckline and I’m hoping this is enough to keep it up on the child’s shoulders. I only cut out one dress from this pattern and had planned on doing long sleeves on all the dresses but I ended up not having enough for this pattern and made the short sleeve version instead. This pattern requires more fabric than the Simplicity one.  I’m really liking the Simplicity pattern more and more. After making one dress from each pattern, I've decided Simplicity is a better choice for me.
After sewing the bodice front and back pieces together at the side seams and shoulders, I repeated it with the lining. Then I sewed the bodice and the lining right sides together, & flipped it right side out after trimming the neckline. I topstitched along the neckline very closely to the edge and it has the appearance of piping. The bodice was pinned to the waistband, matching notches, and I pleated the excess between them. I pleated the sleeves into the armholes rather than gathering them to have less bulk. Then I pinned the skirt to the lower part of the waistband, again pleating it to fit. On both the top and bottom of the waistband I topstitched them close to the seam lines. I machine-sewed buttonholes on the back and used some shell buttons I bought by the pound in a button store in Los Angeles Garment District, called Trim 2000 Plus, on Maple Ave.
The hardest part of making these I think are the growth pleats. I haven’t found a quick way to do that yet. They need to be measured, marked and pinned, then pressed & topstitched after the side seams on the skirt & sleeves are sewn because the tucks need to be able to be let down if needed, and if they’re in the side seams, that won’t work. It’s tedious and need to be measured to make them even. I’m working on that aspect. 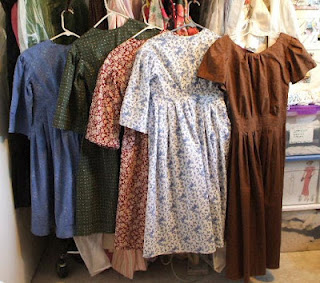 I can’t say how long it took me to make each one because a couple were started on my handcrank machine, and a couple started at a later date. But since I’ve made these, they will go faster now. I had trouble finding some fabrics that would work at my $3 and under price range when I first started looking but since I started these, I found a few more fabrics that will work. I even saw a cute little girl’s fancy dress that I think could be made using some leftover plaid silk taffeta I have.

Posted by Time Traveling in Costume at 6:27 PM