Started Jan 2011/ Completed April 2012
May 2011
In March I began sending out emails to different historical societies and museums, mainly on the East coast, asking if any of them had documents or extant Bloomer outfits. My focus was on the area of Seneca Falls, NY because this was where the Women’s Rights Movement started and where Amelia Bloomer was first documented wearing the Bloomers. I had many responses telling me they had the underwear type bloomers and sporting costumes but these were from a later period. I tried different historical societies that were suggested, but without much luck. In May I had a response from the Ohio State University pointing me to the Seneca Falls Historical Society, who had an extant gown in their museum. The Costume Collections Manager at SFHS sent me a woodcut photo of Amelia Bloomer, and I later purchased a copy they had of Ameila Bloomer’s newspaper, The Lily. She then forwarded my email to Courtland County Historical Society, and to Pamela Poulin, Professor Emerita, at John Hopkins University. Pamela had actually portrayed Amelia Bloomer and wrote an entire treatise on her. Pamela was very helpful with lots of information on Amelia and the dress reform movement but also said I needed to go to the original source of the Bloomer gown, Elizabeth Smith Miller. Miller was the first woman to start wearing a bloomer gown after seeing some women in the Oneida Community, a local religious sect, wearing men’s pants under shorter dresses while they worked. 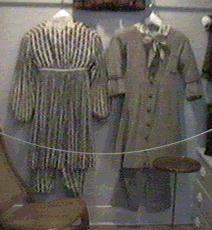 Miller created her own version with the full pants known as Turkish trousers. 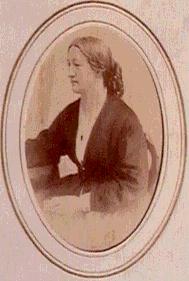 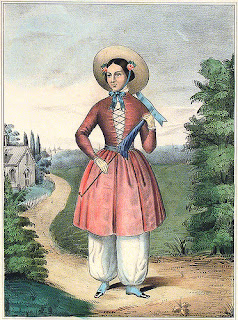 It was at one of the Women’s Rights Conference that Amelia was introduced by Elizabeth Cady Stanton  to her cousin Elizabeth Smith Miller, who was wearing her bloomers. Amelia adopted the same dress after that, and it was the newspapers who reported Amelia wearing the pants, and named them Bloomers.
Pamela made suggestions of more museums to contact, and to go back to the ones in Iowa, where Amelia eventually lived out her life. I told her I was focusing more on the dress story than Amelia but that she would be a focus in my story.
Pamela also introduced me to Jody Luce, of Peterboro, NY, who portrays Elizabeth Smith Miller, and actually lives in Miller’s historical house. Jody and I began a lively conversation back and forth on the costumes, and she shared more information and photos of Miller with me. Jody helps run an annual fund raising tea each year in September for their historical society, and always wears her costumes for it. 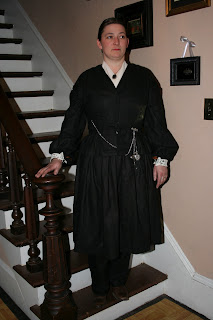 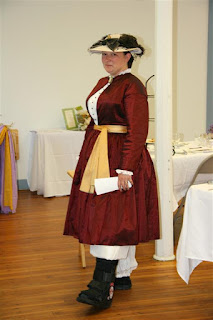 The Courtland County Historical Society sent me copies of newspaper clippings of a beautiful all black bloomer costume they had on display that was covered in embroidered designs. It was thought to be only one of two gowns in the country. 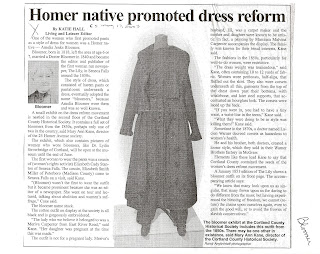 At some point in my conversations between the different historical societies it was mentioned that one of Amelia’s Lily newspapers had information on making a bloomer gown but we haven’t been able to find it. The two museums claiming to have the ONLY Bloomer gown known to be in a collection were very excited to learn of other’s and of the one in the San Diego collection.
I was also emailing back and forth with Saundra Altman of Past Patterns sharing some information and encouraging her to finish the pattern in time so I could bring some to Costume College the following August. The best she was able to get me was a copy of the partially completed one but it had a cover photo so I was finally able to see what it looked like. When Saundra mentioned there was a family photo of the original gown being worn by its owner in a book, I contacted our SD History Museum, and found out they carried the book for sale in their giftshop. I raced on over there and bought the rather pricey book, but the treasure was worth it! There she was, Anna Stickney, on the right, wearing the original gown before it was altered to a Bloomer gown. I just about yelped in the store when I saw it, and the neat thing was even though the photo was black and white, I now knew it was an avocado green. 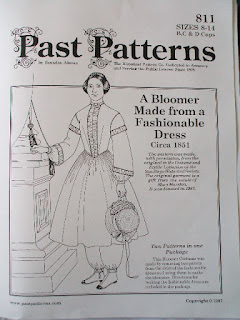 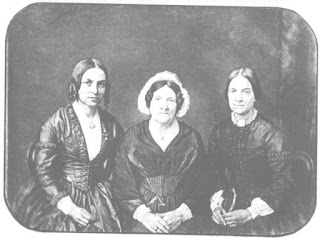 With much of this information in hand, I was able to finish my copy of the San Diego gown and I wore it to Costume College with my friends in August of 2011. My post on making it is this entry. http://timetravelingincostume.blogspot.com/2011/08/1850s-bloomer-gown.html  I shared some information on the pattern and got a list of names of people who were interested in purchasing it when it was completed. My accessories that I wore with it are similar to those shown in photos of other Bloomer ladies; the flat hat and a watch chain. I also wore a wig with two gold bows in the back. *Remember this when you see the final cover art on the pattern.* When I first wore the green one I added a gold sash similar to one that Amelia wore. 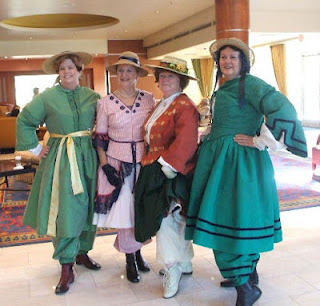 I wore my gown a few more times in fashion shows both in CA & WA, and the Suffrage Parade in Balboa Park, San Diego. By this time the gown was starting to show some stains, and the fabric doesn’t wash well. It’s also very hot to wear in our southern climate, so I began planning a second one, this time in cotton. I chose to make it in the style of Mary Stickney’s sister’s gown in the photograph, with a v-neck. My post about this dress is in this previous entry. http://timetravelingincostume.blogspot.com/2012/04/1851-brown-cotton-bloomer-gown.html
I continued going back and forth with Saundra getting different dates she would have the pattern completed, and finally to set a date for April in 2012, when she promised them by March, so I could do a presentation on it for Costumer’s Guild West in Los Angeles. But Saundra only sent me three copies of the pattern but still incomplete in it’s directions. Saundra also told me I would be the only one they could purchase the pattern from at this time, and it wouldn’t be on her website.
I wore my new brown Bloomer outfit for my lecture and displayed the green copy on my dressform. My presentation on it went smoothly and I was very excited over the great response I had for it. I had a lot of fun when I was finally able to reveal the very unusual part of this gown: that the Bloomers on this particular gown are actually SPLIT DRAWERS. In all my conversations with other museums and historical societies, the ones they had were more like men’s pants that were pulled up and buttoned at the waist.      My entry on that lecture is here. http://timetravelingincostume.blogspot.com/2012/04/my-lecture-on-re-creating-1851-bloomer.html  I sold those three copies of the pattern I had with the promise of sending the completed directions to them when they were done.
Now that I had my first presentation under my belt, I felt I was ready to do my class at Costume College in August. I really began pushing Saundra to finish the pattern, which she had decided to redesign the cover art and had more historical documentation to add to it. By the time I was finally able to purchase 18 copies to bring to my class, the price had gone up $10. I had hoped to buy more than that but it was too much money for me to put up front all at once. And I wanted to see how they would sell. Saundra had acknowledged me in her pattern instruction booklet, so I went through all the patterns and signed my name next to it.
I was a little disappointed in the change of the cover art because I thought the first one was so cute but Saundra wanted to show the original gown and that the pattern was also for the full length too. *Notice the hair style on the new addition to the artwork? Remember how I wore my hair when I wore my gown?* 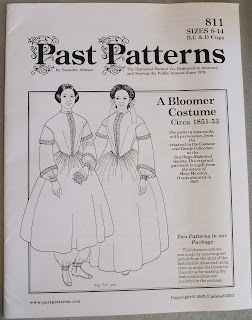 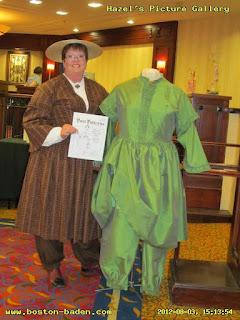 It turns out that the excitement I shared in my class at Costume College infected everyone there and they were lined up in the front of the room to purchase them. All but four of the extra large ones were sold. More on my class can be read in this entry. http://timetravelingincostume.blogspot.com/2012/08/the-wearing-of-costumes-aka-costume_13.html      Since being home I’ve had two of the remaining patterns put on hold so now I feel comfortable ordering a few more. I’m booked to present my class on September 22 for the San Diego Costume Guild, along with Jody Regan’s The Harvey Girls presentation. We decided to join together and do a Costume History Lecture and Lunch. And on January 28, 2013 I’ve been booked to do my presentation for the San Diego History Museum, and was told the Costume Society will be there. Eeek!
ETA: This was my presentation at SDHC      http://timetravelingincostume.blogspot.com/2013/02/my-presentation-at-san-diego-history.html
One of the fashion shows I was in wearing this in Old Town San Diego.   http://timetravelingincostume.blogspot.com/2013/08/women-of-west-fashion-show-in-old-town.html


Posted by Time Traveling in Costume at 2:15 PM