Started August 2009/ finished October 2010
I’m not doing a lot of fancy sewing right now but did catch up on a few projects. I’ve been sewing three silk taffeta skirts for 1870/1880s outfits, and will be putting a pleated ruffle around one of them. These are plain to use as a base for a variety of costumes. And I keep remembering I need to make a couple more chemises of various eras, and a couple petticoats, also a variety of eras. I’m trying to take advantage of a slow part of the year for costume events.
In the next two months our Costume Guild will be setting up our Guild tent, The Guild of Taylors, at the Escondido Renaissance Fair. I don’t really care much for the Elizabethan clothing yet (famous last words) but I do like to join in. Last year we were talking about doing our own ecclesiastical court to follow the Queen’s Court. So this would be cardinals, bishops, maybe a Pope or two, and nuns. I didn’t want to be in a black and white penguin suit, so I did some digging around online, and found this Carmelite nun. With a maroon tabard, I can blend in with the cardinals, etc. I picked up Simplicity’s various costume pattern #3608. 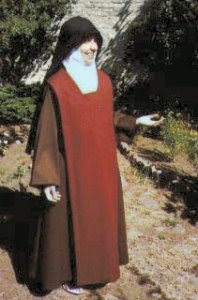 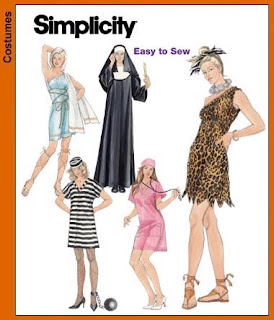 Last Fall I tried making it in a dark brown cotton fabric but hated the way it draped. It felt cheap too, and not at all rust-icky for a Renaissance Fair. So last week after another trip to the Garment District I found some inexpensive brown linen-blend (if you can call $6 yd inexpensive but it is). I already had some leftover, very thin, maroon wool-blend for the tabard.
So far I’ve got the robe, cap, and veil done. You can see a sample of the maroon wool I’ll be using for the tabard. The part under the chin will probably just be some drapped white cotton. I don’t have a belt on it yet, & I photographed this over another costume on my dressform so it’s fitting a little wonky. Next up will be cutting out the tabard. 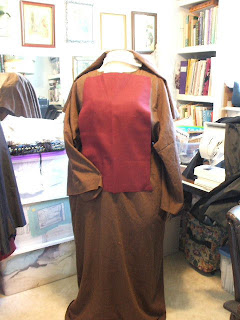 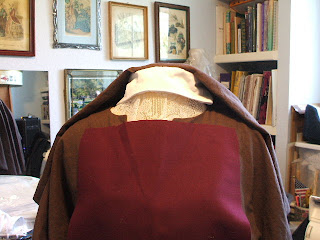 I have a set of skeleton keys on a key ring to hang from my belt, and a large cross to go around my neck. And I have two big pockets on either seam to hide all the non-period things. 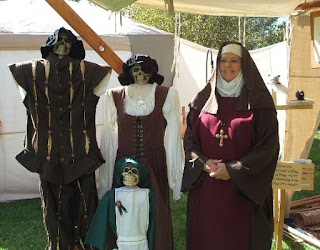 Posted by Time Traveling in Costume at 10:53 AM 1 comment: