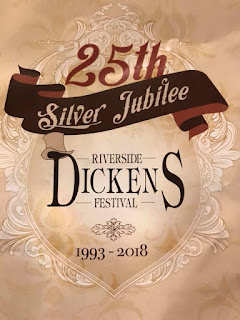 This was, I think, my 10th year being in the Riverside Dickens fashion show. It’s now the focus of my drive up there each year, and it’s always fun to have a new dress for it. In the Dickens newsletter that is emailed out to everyone, they used our large group photo from last year on the cover for it this year. The fashion show is held at the Riverside County Courthouse, a beautiful historical building and we’re in one of the courtrooms. 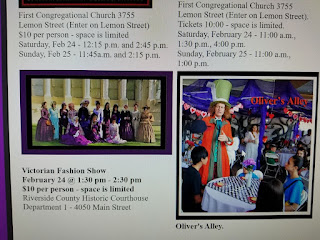 I was really excited that I finished my 1855 Green Floral Tiered dress in time for it. I had it finished about a month ago, and had gone on to working on other dresses. And as usual, I didn’t try it all on before wearing it to the event. Fortunately, the only oops were the waist was too big and kept sliding down, so I kept stepping on my hem, and I forgot to add a snap, or even a safety pin to the front closure of my bodice under my green bow, so the bow went wonky. Other than that, I LOVED IT!

My big mult-tiered cotton petticoat was so heavy carrying it, but once I put it on over my hoop, and with wearing my corset, I felt light as a feather. I just loved watching it float around me.
The theme for this year was “Family Fortunes”. We were to find a character, either real or fictional, and tell how we earned/acquired/inherited our wealth. And we could be as serious or funny as we liked.
For my 1855 dress, I chose Lady Augusta Elizabeth Frederica Stanley, a well-to-do woman who lived in Paris with her wealthy parents, and at an early age, became a Lady in Waiting to Queen Victoria in the 1850s, and later married Lord Stanley, the Dean of Westminster. After her death, her letters were combined into a book that’s still available to read today, "Letters of Lady Augusta Stanley: A Young Lady at Court 1849-1863".  In fact, I bought a copy off Amazon so I could read it. I just wished it was available on Kindle.
I carried my antique 1850s parasol with a mother of pearl tip and handle, and wore my ivory wire-framed collapsible bonnet, that I added some vintage green leaves to it to draw in the green of my dress. As I walked past Queen Victoria and Prince Albert, and their court, who were attending the show, I received a nod from the Queen. 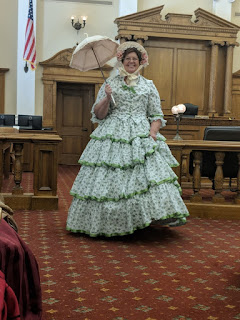 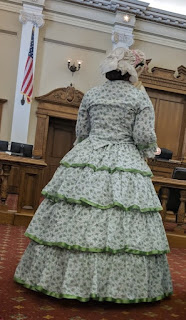 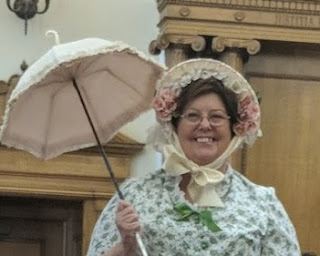 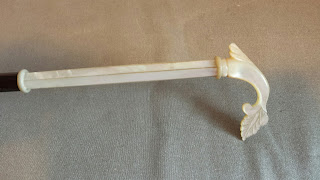 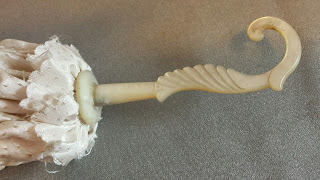 The day before the fashion show, our organizer, Nancy, had lost a few models to illness (bad year for the flu) so Cindy and I offered to wear two dresses. I decided to wear my 1894 Brown Polka Dot dress, and created a fictional character, Elsie McGuire, the Mad Poisoner of Limerick and had fun writing that story.

“In the small town of Limerick, Ireland, in 1894, a woman by the name of Elsie McGuire became famously known as the Mad Poisoner of Limerick, although none would call that to her face, because it couldn’t be proven. Elsie made her first marriage to a small landowner who was able to keep her well-dressed in a beautiful home. But sadly, he died a year later, it appeared from a rare disease.
Two years later, the now wealthy Elsie, met and married another landowner, and they combined their lands to create a large holding. All was well until one day he was found dead, foaming at the mouth. It was thought he may have ingested some fertilizer, but that was the best the local doctor could determine.
Elsie remained a wealthy widow for about 5 years until she met a squire from the next county, who he himself desired to acquire her money. Unfortunately, he died of a heart attack not 3 months after they married.
After a year bereavement, Elsie is now looking for a new husband. Do we have any gentlemen available? “
I carried my 1890s brown leather purse that could hang from my waist, and wore my boater hat with it’s cream bows, gold buckle, and brown feather. 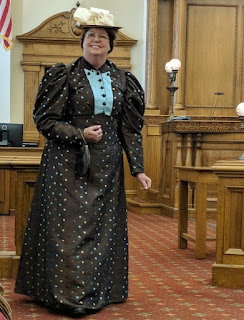 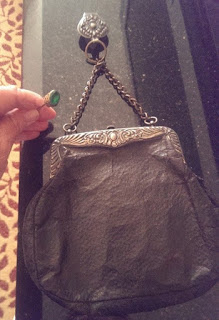 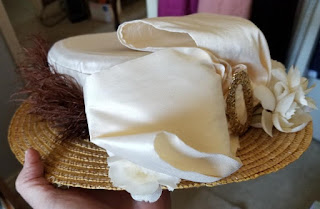 These are the only group photos I’ve found so far but don’t include everyone that day. 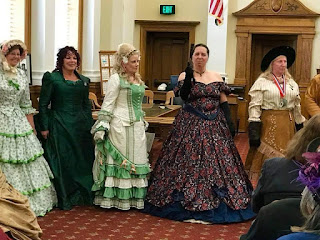 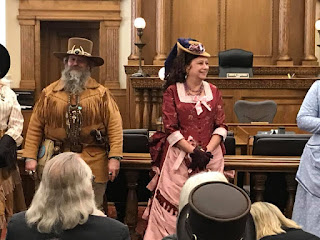 These are two photos of my friends, Cindy and Gina before the show. I thought Gina had the prettiest 1830s dress I’d ever seen. 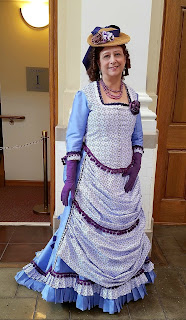 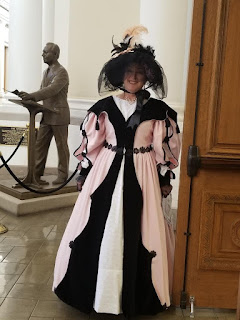 Earlier in the day, Cindy and I walked around a bit, had lunch, and then stopped by the Mission Inn to take some photos of our first set of dresses for the show. 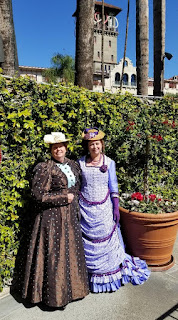 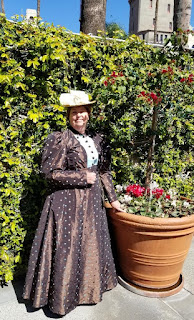 After the show, we again walked out in the promenade to shop, and to pick up a couple Truly Victorian patterns from Shelley, at the Kansas Mercantile. 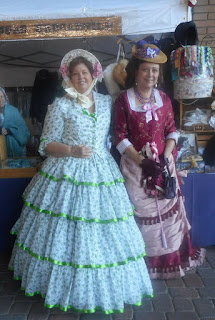 And wouldn’t you know it? I overheard someone mention the Gone with the Wind BBQ dress when they saw my dress. Ok, I get it. It’s a big skirt and green floral fabric but I’m 10 years earlier. But I’m glad they liked it. 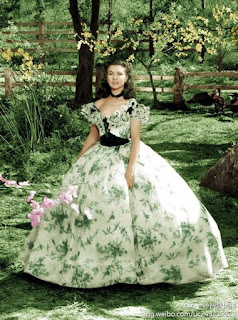 My thanks to K. Holian, and T. Clevenger, for the photos I included in my blog.
~~~Val~~~
Posted by Time Traveling in Costume at 1:32 PM No comments: