Lots of sewing, packing, and traveling going on

Tomorrow morning I'm flying up to Washington state for two weeks to visit family and am going to the Victorian Festival in Port Townsend with my Mom. We went to it a few years ago and I'd brought my first Dickens outfit, a skirt and cape made from Simplicity's 8910 way back in 2003 for her to wear. She had so much fun and has always been asking when we could do it again.
Last August while at Costume College, I met a couple ladies from SITU (Somewhere in Time Unlimited) a costume guild in Seattle, who asked if I'd ever been to the Festival. Then they started asking me to come with them if I was ever in WA during the Festival again, and be in the fashion show. That got me thinking about planning a trip up there for my birthday and around the same time as the Festival, which is March 23-25.
Planning ensued for my travel and for costumes to mail up to wear in the fashion show. Since I didn't have my original "Dickens" costume anymore, I also had to make a new one for Mom. Butterick had come out with their own version of the "Dickens" costume #5265, so I made that one for her out of a hunter green wool blend plaid that she could pile warm thermals under it.
I had a hard time deciding what and how many of my costumes to bring for the fashion show. Since I'm not familiar with it, and they didn't seem to have a plan for anything specific or a timeline, I first decided on only two, but later added a third as long as they gave me time to change. So my fashion line up will be my 1850s Bloomer gown re-creation, my 1885 Best Black Bustle, and my 1898 Belle Epoque gown. 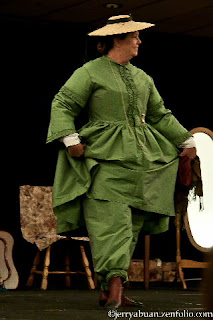 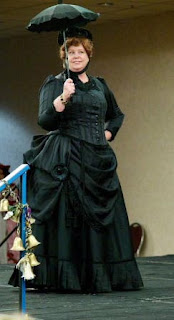 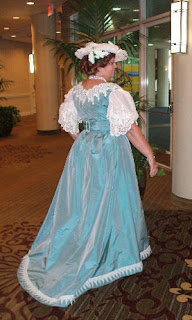 Since the high temperatures will only be about 45d F (brrrrrr), I needed to figure out which one could be worn about town during the Festival that could have my warm thermals on underneath. I don't have any outer coats or wraps to wear over them, since it "never rains/snows or is cold" in So. CA. Well, the last two days proved that wrong. So I will have to bulk up under my costume and wear my shawl. My Bloomer gown seems the easiest to do this with. So if you're up there, look for me in my avocado green gown, or at the fashion show.
I'm also going the next day of the Festival to an afternoon tea at the Blue Gull Inn, and decided I wanted to wear something fancier, so for that I will wear my Best Black Bustle and just let my neck freeze with its square neck opening.
I'm looking forward to seeing all my friends there, and taking lots of photos.

Posted by Time Traveling in Costume at 3:01 PM 2 comments:

I was up in Vista yesterday for the Civil War reenactment, and it was mainly (besides playing dress up) to learn how to use my hand crank sewing machine from the other ladies there. There’s a group of reenactors who have created "Oak Street" which is a main street row of shops (tents with space in front) containing a bakery, hotel, seamstress, etc, and they set up like a main street. I was in the seamstress area, and there were a couple of us sewing. I had to learn basically from scratch how to use my machine (threading it/ winding the bobbin shuttles/ setting the stitch length) and my friends had suggested making a small quilt. But I wanted to make something that was more useable or something I needed. I ended up making the skirt that goes to a child's Civil War dress that I'm making for my friend Shelley to sell in her sutler’s tent. It was all straight seams and sewing the growth tucks on the bottom of the skirt. We were photographed constantly by the public and professional photographers, and had many questions asked of us, which is the reason we're doing this.
Even though the sewing is slower, I really enjoyed it, and had a big grin on my face when I finished my first seam. But man, is my right shoulder sore from all that cranking!  One of my friends gave me a wooden thread spool so I can hand wind my thread onto it and use it with my machine. 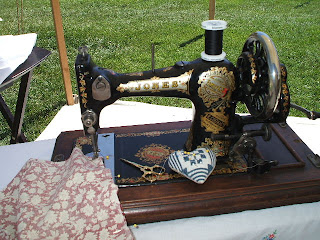 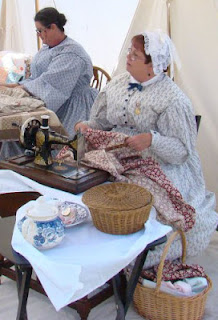 These were my two friends who were sewing with me, Laura-lee, and Paige on the right, who taught me how to use it. The two skirts hanging behind Laura-lee were both made by Paige on her hand crank machine. We were joking about how I end up ripping out seams just as much as sewing them, so I said just call me Ripper. They said my name should be Mrs. Ripper, since they all have fake names for their shops. I thought about that awhile, and I’ve decided my name will be Mrs. Victoria Ripper, although that sounds a little  theatrical.  But I could have fallen on hard times during the CW and went back to sewing to support myself. They all like to have back stories to their characters. 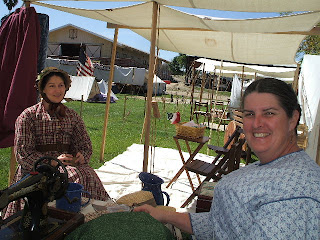 I was so busy I forgot to hand my camera to someone for a photo of me. But if any show up somewhere, I've been told they'll be sent to me.
This is the dress just pinned together after I got home. I still need to cartridge pleat the skirt and attach it to the bodice with piping between the seams, and then add the sleeves to it. I plan to sew black rick rack around the neckline and bottom of the skirt and sleeves. 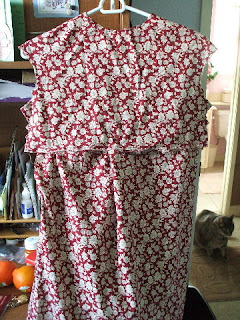 One of my other friends, Beth, who wasn't there this time usually does an afternoon tea for any of the ladies in the camp area (her husband runs the newspaper office) and I'm not sure if she's part of Oak Street. But I told the ladies that in the future if my friend wasn't there for this, I'd like to also do the afternoon tea thing. One of the "shops" makes lunch for us at the cost of $5, and yesterday we had cold meat pies, a delicious cucumber salad (that I got the recipe for), fresh sliced peaches & oranges, cottage cheese and pistachios. My friend that does the tea has a large collection of  Blue Willow stoneware plates and cups that she uses. I've found a few pieces for her in the past. They were used during the Civil War and are sturdier than fine china. So if I'm going to do that, I need to start looking around for some like that, mainly in thrift stores because they're dirt cheap there. But I would need to use my own stoneware teapots because you can never find those at all. But since I only make 1 or 2 CW events a year, I'm thinking of  NOT getting the Blue Willow, and just using my sturdier china that I take with me for my tea catering. They would have been in existence with the wealthier people back then. However IF I did find some Blue Willow cups & plates DIRT CHEAP, well, why not?   But it’s only a thought. I had way too much fun sewing on my machine, & it was quite an undertaking to get organized to set that up, and its 30 lbs so I don’t travel light. Now I have to teach my friend Cindy how to sew on her’s that she got for Xmas.

Posted by Time Traveling in Costume at 11:28 AM 8 comments: