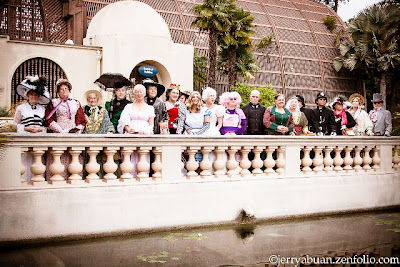 Today was the House of England day in Balboa Park, San Diego. There are a group of small cottages representing all different nations grouped together in the park and each has a special day. One of our guild members came up with an idea of having us dress at English authors or characters from their books, which had a huge window of opportunity to work with.  The plan was to have a lawn party & picnic nearby in the park, and be able to explain to anyone who asked who we were and a little bit about our author or character. Later this included parading around the House of England during their presentation, and again at the Organ Pavilion during part of a program they had with a children’s choir. A lot of walking was involved with our day.
Since my brain has been constantly whiplashed to 1830s recently, I knew this was a chance to wear my gown again. And it fit in perfectly with Cranford by Elizabeth Gaskell.  I chose to be Miss Matty Jenkyns, one of the two sisters from the book of Cranford. My visual was of Judi Dench’s photo of her from the Masterpiece miniseries of Cranford. 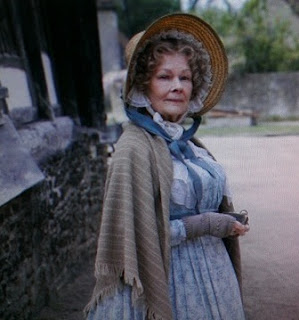 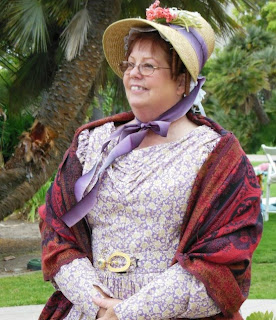 At Cindy’s suggestion, we carried the book which either our character was from, or was the author of. I found a really nice copy of Cranford on Amazon for $2.00. Cindy as Beatrix Potter carried a Beatrix Potter Journal she’d found. I also included a piece of very fine lace so if asked I could tell the story of how Miss Pole’s kitty had swallowed the lace while it was soaking in a bowl of buttermilk to whiten it, and what they had to do to recover it. I also had planned to carry an orange to have a further tale to include but ran out of time to get one. After refreshing my memory of all the short stories in Cranford, and partially watching the video again, I was ready to go out as Miss Matty. 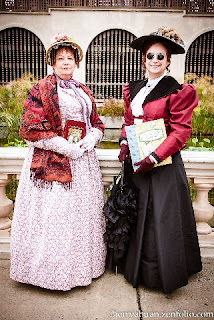 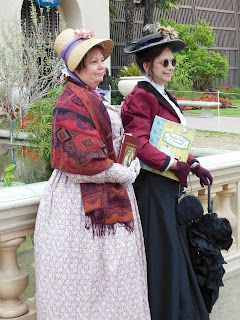 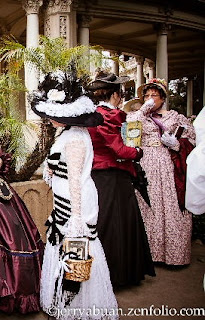 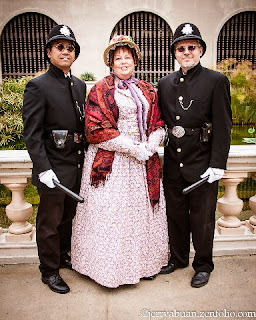 Our picnic started out near the Lily Pond and botanical gardens with about 12 of us. We started getting a lot of attention from people walking around and as more of us began to arrive, you could hear the excitement in the air. Our Alice from Wonderland probably got the most attention from the kids. 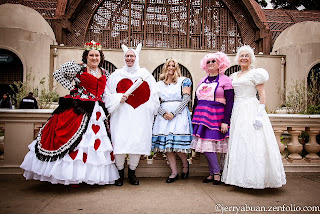 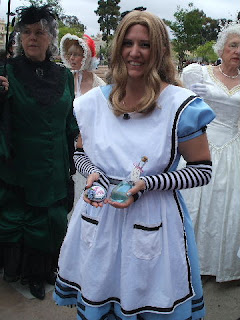 From my memory, I saw Beatrix Potter; Alice in Wonderland with the Red Queen, the White Queen, the White Rabbit and Cheshire Cat, Jane Austen and characters from her books; Romeo & Juliet and Lady McBeth from Shakespeare;  Miss Marple from Agatha Christie’s book; two English bobbies; Professor Moriarty & Mrs. Hudson from Sherlock Holmes; Mary Poppins;  Eliza Doolittle in her black & white Ascot dress from My Fair Lady;  Wilkie Collins & characters from The Moonstone; Professor McGonagall from Harry Potter; & a hobbit from Lord of the Rings. There are many more I never got their names to.  And we had a few guys who rode in on their antique Penny Farthing bicycles. 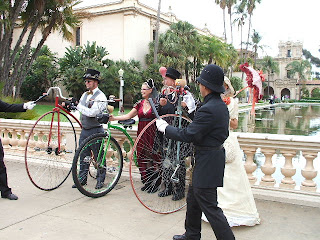 After about an hour of having our photos taken, we paraded over to the organ pavilion and down to the House of England where their program had just begun. They played the British national anthem and introduced a few people, then invited us to walk through the area, playing some of the theme music from some familiar movies our characters were in. I walked around a bit among the audience and introduced myself quite a few times. 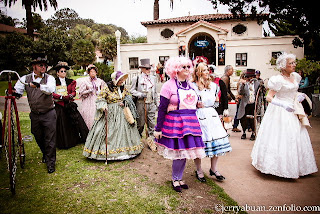 Then we headed back to the organ pavilion where another program was going on, along with a children’s choir. With so many of us, our parade line took quite a while to make it past the stage and up across it. 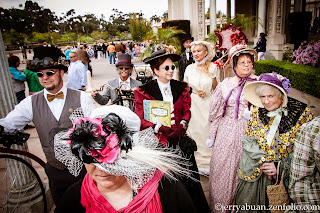 These are more photos from my album. http://www.pbase.com/cinnamonhrts/english_authors_lawn_party

And my thanks to Jerry Abuan for the use of his photos, and for taking such wonderful ones.  http://jerryabuan.zenfolio.com/p847017115


Posted by Time Traveling in Costume at 9:44 AM 4 comments: