March 16, 2011
Last week I attended the Costume Accessories Symposium(CAS) in Williamsburg, VA. At the end of the two day lecture series, I had signed up to take a muff making workshop put on by Janea Whitacre, the Mistress of Millinery & Mantua Maker at the Margaret Hunter Millinery Shop in Colonial Williamsburg.
Our class of 15 got to see a variety of sample muffs made by the ladies of the Shop, including some lovely mitts and a workbag. 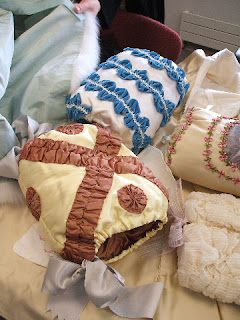 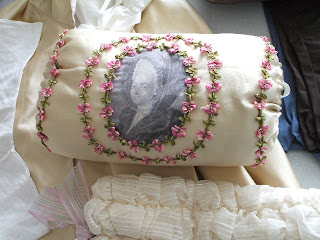 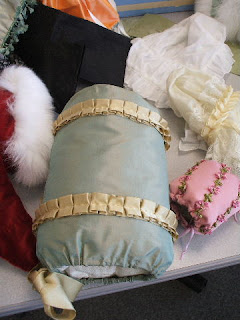 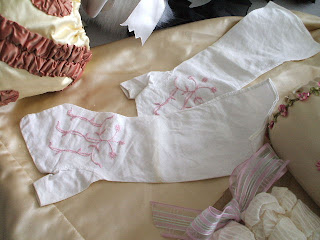 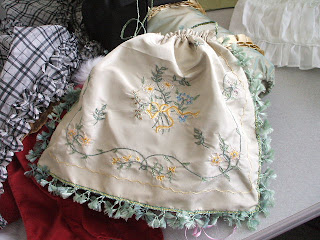 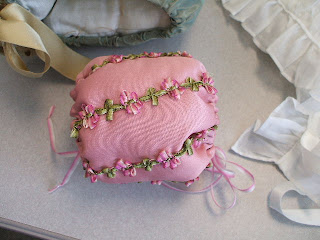 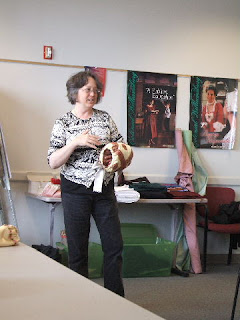 Isn't that pink one for a little girl just precious?
Janea explained that we had an option of making a single muff, OR making a separate stuffed linen bag that could have an interchangeable outer cover. I think we all chose the second option.

We were given many choices of colors of either silk satin or silk taffeta fabrics to make our muffs with. I chose a dark sage green silk satin, and after looking over the various trims, I used a simple variable green & cream trim that I would make a swirly pattern with on my fabric. Then I picked a pink ribbon flower trim to cut the flowers off and sew onto the trims. Janea came over and looked at it, and suggested I do a double row of the trim, turning it into a lattice, and put the flowers inside the squares. I thought at first I shouldn’t use so much of their trim but she was very generous with what I was using. 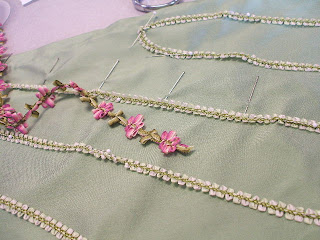 Everything was handsewn. Once we hemmed one side of the cover, we folded the sides in to form channels for the ribbon closures on the sides. We left it open so we could sew the trims on first. We then made the inner linen pocket by sewing a long tube, then turning it inside out but only half way so there was a pocket to stuff & a hole through the middle for your hands. We used real lambs wool to stuff it with. 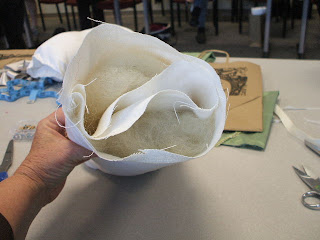 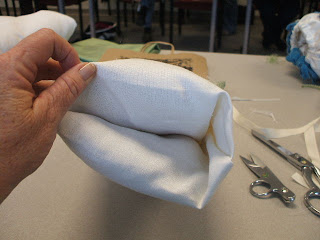 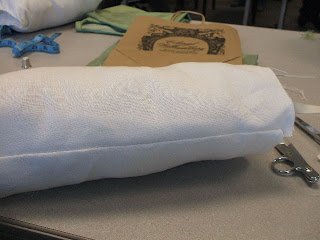 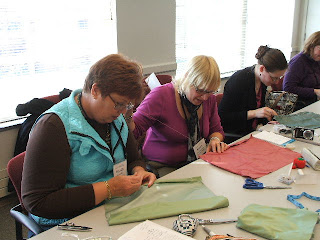 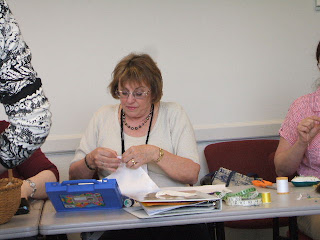 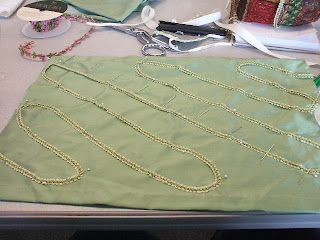 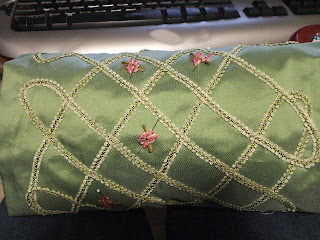 By the end of class, a few people were close to being done. It’s a fairly easy project that can be carried around to work on. And since the cover is interchangeable, I can already imagine other covers I want to make. 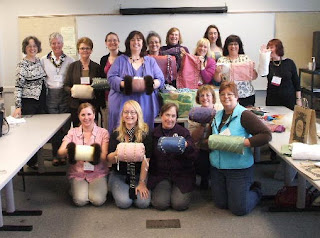 After I flew back home to San Diego, I was really enthusiastic about finishing my muff. But of course things kept interrupting me, and it took a week to finally finish it. I never got far along enough during the class to get the finishing instructions so I had to wing it the best I could. After sewing 28 ribbon flowers on the squares, I sewed 24 tiny crystal pearls, that I purchased here locally in a bead shop, in the other squares. 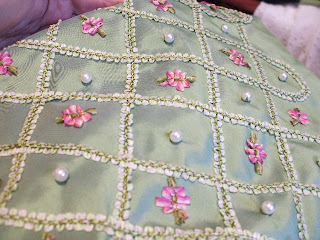 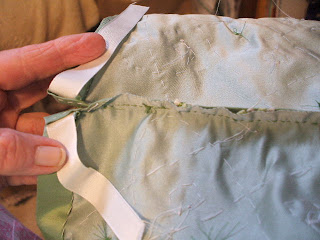 I turned the raw edges on the long sides of the muff and stitched those together to close the muff. I was finally able to put my ribbons through the side channels to draw it closed. After sewing the opening closed on my inner linen muff, I was able to stuff it into the finished outside silk cover. The inner muff didn’t have enough stuffing so it’s not as full as I’d like it but at some point I may get some batting to fill it out. I had chosen this narrow ribbon in class for my drawstring, as opposed to the wider ones, but now that I have it in, I think I’ll get some of the wider ribbon and replace it. 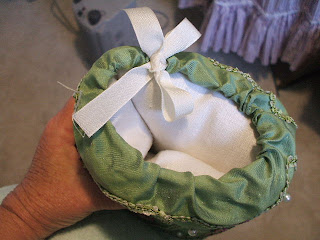 And here we have the final muff. Since I can easily replace the outside green silk cover with other covers, I’m going to be thinking of a less fancy one to make next. 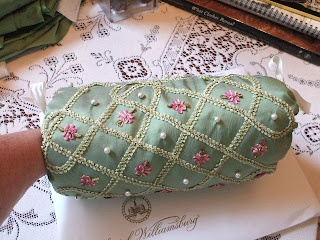 My thanks to Janea and the ladies of the Margaret Hunter Millinery Shop for making this such a fun class.
Posted by Time Traveling in Costume at 8:22 AM