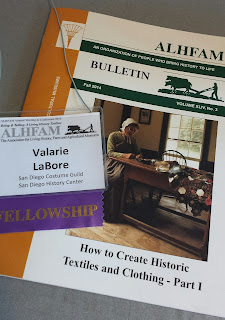 I just returned from my trip back to Williamsburg for the ALHFAM Conference at the William & Mary College, and I still can’t believe it happened. Mostly I can’t believe that my co-presenter, Jody Luce and I got to meet in person and hear each other’s voice after a few years of emailing back and forth and sharing information about both our passions. We even celebrated the anniversary of first becoming friends on Facebook while we were there. She and Melanie (one of her Bloomer Brigade in Peterboro, NY) drove 9 hours to attend the conference just to do this one class with me. Jody portrays Elizabeth Smith Miller (the original lady who wore the short dress with Turkish trousers) and even lives in her historic home. Prior to my contacting the historical society there, knowledge of these two dresses were unknown to each other. 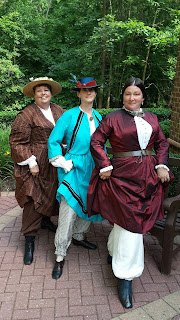 Most exciting to both of us was the bringing together from opposite coasts these two historic and unique garments related to an important time in women’s history in the 1850s, the Women’s Rights Movement, and a garment that would influence women’s dress in the decades to follow to this day. 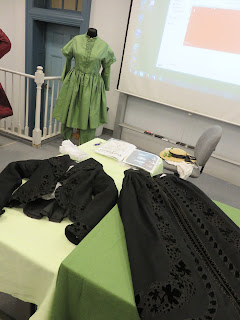 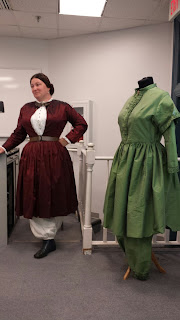 Neither Jody nor I knew each other’s style of presenting our stories, so we both enjoyed seeing and watching each other tell them. I learned a few new things from her on the bloomer dress: that it was mostly a very stylish and fashionable dress, rather than a utilitarian one that I was leaning towards.  And later versions that I *thought* were bloomers, were actually more of a coat with men’s style pants, similar to those worn during the Civil War. But the idea of wearing pants remained as the focus. The “bloomer-style” dresses were short-lived just barely into the 1860s, with the advent of the crinoline hoopskirt, with possibly one “late bloomer” in the early 1880s by Marietta Stow. The rest were mostly gymnastic costumes or bathing garments.
Our arrival for our presentation at the W&A was rather confusing. I never met anyone on the day of registration. I found the college information desk with two students, asked where I go to pick up my papers, and was told they had it. So I got those, along with an ALHFAM-logo tote bag with a metal water bottle. And I left. The conference and classrooms are scattered all over the campus and I had a hard time finding anything even with a map since the buildings mostly were not marked that we could tell. We had to scout out the place the day before just so we could find out where we were going to be at. I didn’t attend any classes or dinners because I was only in Williamsburg for a few days and had friends I wanted to visit. So I may have been able to talk to more people if I’d done that. But considering I didn’t know anyone there I would have felt out of place. Also, I found out later the majority of attendees are not students or costumers there to learn but managers and directors of living history museums who share and learn how to run their locations. At least that’s the impression and knowledge that I picked up. I did meet a couple attendees who I would actually consider students but that was it. I was kind of a fish in the wrong pond there. I did make it clear at the beginning of my presentation that I was a costume interpreter, not a reenactor, nor an expert in any field. I simply wanted to share these dresses and the wonderful bits of history related to women. 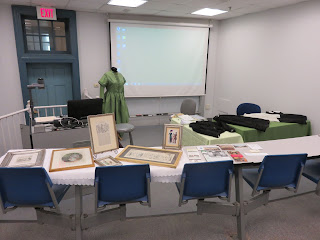 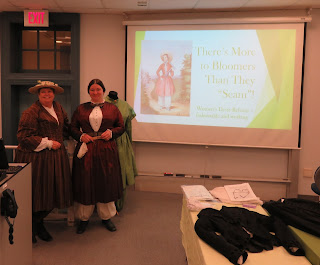 We had a nice classroom, and it was comfortable, considering it was horribly hot, almost 100d and a closely matched humidity outside, and being in full costume made it harder on us. Both Jody and Melanie and I were dressed in our favorite bloomer outfits. Right there I wanted to say our gowns, but I was told by one of the attendees in class that I shouldn’t use that term and it wasn’t used back then. I had been using it to clarify that this was a dress not underwear whenever bloomers were brought up, but from now on, I’m to use dress or costume. These were also known as the American Costume. The room was already set up with a computer, projector and screen so all we had to do was plug in my thumb drive and we were off. I brought my green silk dress I recreated from the one held in the San Diego History Center's costume collection, using the Past Patterns pattern I had, and displayed it on a dress form. Jody brought the black wool one from the Cortland County Historical Society in NY, and laid that out on a table to show it to everyone. That one was definitely a show-stopper as it was an original one, compared to my re-creation, and it was beautifully embellished with velvet appliqued leaves and berries. The skirt has trimming all down the front and around the hem. The bloomers are gathered at the ankles with a repeated trim. The jacket was the prettiest part. It has a lapel collar, and closes at the waist and spreads open below. The trimming was repeated on it too. Most likely a blouse or chemisette was worn under it. The dress had been discovered stored inside a steamer trunk in the basement of a bank which had closed, and only found when it was purchased by another bank years later. But it still remained there for years until a historical society took possession of it. It had the name of the owner and was dated. But nothing else is known about it. I really enjoyed hearing that story.
The story behind our San Diego dress was that it had originally been made as a full length dress when it came to CA, between 1848-50. About 1851, the owner, who was also known, after seeing the reports on the bloomer dresses in NY, had it shortened and her bloomers were made using that cut-off portion. In a diary her niece stated that she was never seen wearing it on the streets.
Another surprise I had about the NY bloomer was that it also was a split drawer design of pants, although it differed from the SD one in that it buttoned at the waist on both sides where the back opened down, but was split to the front like drawers. When this was shared with the class, it caused a lot of excitement and questions about why this was so. We had one gentleman in the class and he asked a lot of questions because in his own presentations, he said he’s asked quite often about these things. I even “demonstrated” in a lady-like way, how the split drawers are convenient. We told him since ladies didn’t talk or write about their underpinnings, it’s mainly supposition why these particular bloomers were made as split drawers but from a female point of view, it made sense that since you’re already wearing split drawer underwear you wouldn’t necessarily want to prevent their usage by wearing a closed pant over them. Another supposition that Jody and I both have is there weren’t any patterns immediately available for making bloomers so they used what was at hand. 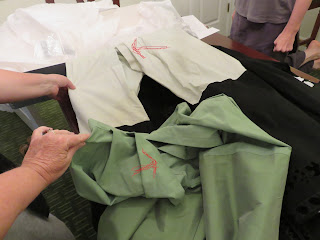 Our attendees to the class were very interested and asked a lot of questions, so that was very satisfying. I had brought brochures from the San Diego History Center that Gabe Selak had given me, along with postcards, and they were picked up. Also some of my business cards and info on my blog were taken too. Jody brought framed original bloomer artwork and music sheets. Jody and I are both hoping that word gets out about these gowns and maybe others will come to light. At least we hope these two will get some more attention and people will contact their prospective museums. 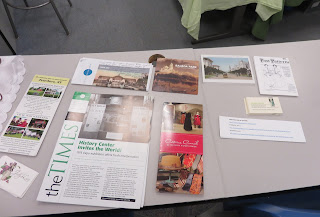 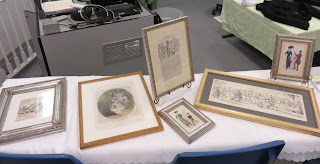 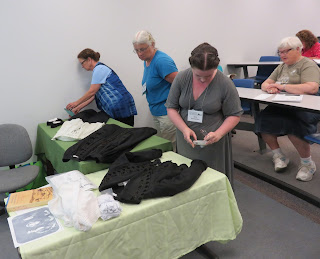 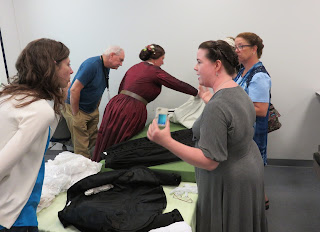 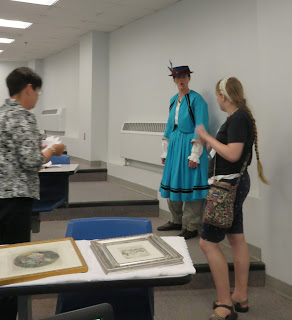 My main disappointment with this conference, other than the confusion, is that my former co-presenter, Pam Poulin, who had first pushed me into doing this with her and then suddenly disappeared, still has her name with mine on the ALHFAM website. I was promised that even if that wasn’t changed, it wouldn’t be in the student handouts and Jody’s would be there. I heard one lady said when she saw Pam’s name, she wasn’t going to attend. But when she walked by the room and saw Jody’s instead, she came in. And she was glad she did. Considering I was hearing Pam has quite a reputation for being half-baked, I now wonder how many others didn’t attend either. I would have preferred distancing myself from her, and getting Jody the recognition she so deserves. I found out there is a program book produced later on from this conference with information on each class and given to the students. They’re going to get an earful, and I’m going to make damn sure they get THAT right.  *Rant over*

*Edited to add* I got my package in the mail today that I had mailed to myself from Williamsburg with all my class papers, and found the student handbook, and it DID have Jody’s name in it. All is well.* 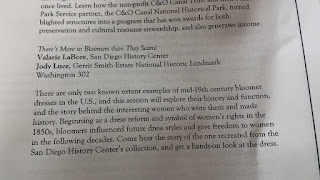 And speaking of that program booklet, we heard we’re supposed to write an essay to be included in it from our class, with documentation. EEK!   No one told me anything about this but given how the rest of it went, I’m not surprised.  I haven’t the vaguest idea of what they want so I hope someone tells me, or gives me examples of what to do.
I want to send out big hugs to Jody and Melanie, for coming to my rescue, and making this all possible. I love that I am now part of their Bloomer Brigade and hope we bring more ladies to it.
As an after-effect of doing this, I now want to make a new bloomer dress (darn, still wanted to say gown) in a prettier fabric and have straight sleeves because I’ve always hated those clumsy pagoda sleeves. 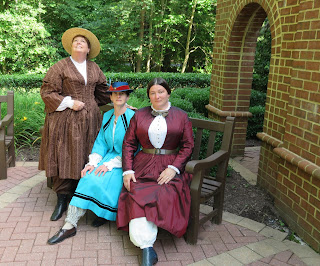 In case you wanted to see that beautiful bloomer dress from Peterboro, here are some close-up photos I took of it. It was a three piece outfit right down to the matching tiny little shoes. 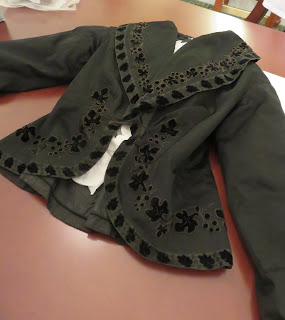 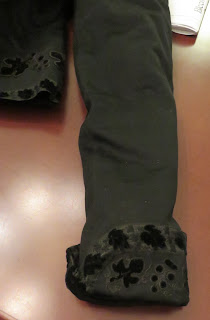 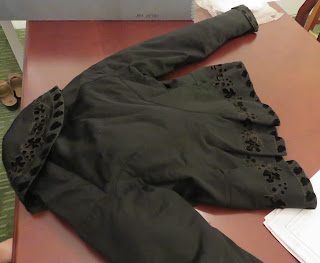 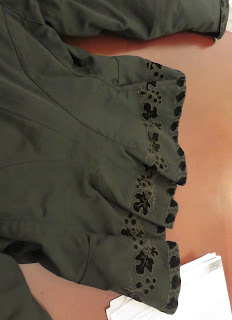 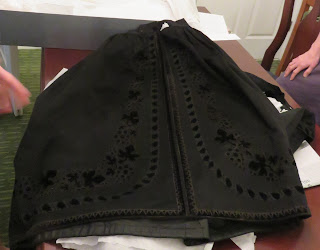 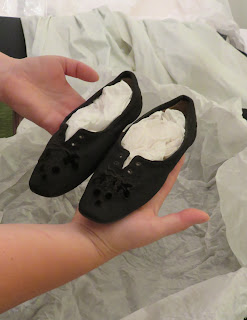 I came home to a very happy kitty, who has been letting us know all day and ALL night just how happy she is. I can’t complain. I missed her too. 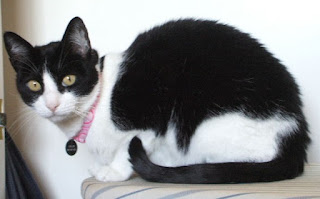 Posted by Time Traveling in Costume at 8:59 AM