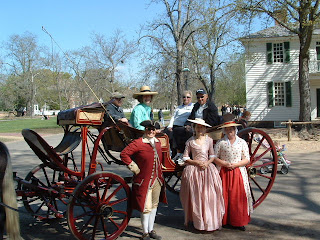 This was the first gown I ever made for the 1770s. I was encouraged by a friend whom I'd met at Costume College, and who worked in Colonial Williamsburg, to make one and wear it to Williamsburg, VA, the next time we visited there. She promised to dress up with me and take me around to some costuming background locations at Colonial Williamsburg. That was enough to entice me.
Two years ago I had made a costumey version using a Butterick pattern for a costume guild event at the Marie Antoinette movie. I was unfamiliar with how the dresses were constructed and totally confused by the stomacher but this pattern wasn't meant to be historically correct. I made it from a white cotton with orange flowers, and a petticoat made of a moire white polyester. The dress was ok but not what I wanted to repeat.
At the recommendation of friends, I used Period Impressions 1770s Polonaise pattern.

Before I made the gown, I had to have the correct stays to wear under it. I used a Butterick pattern, also recommended to me, and got started on it in a class with Shelley Peters in November 2007. I made it out of a powder blue silk dupioni I'd bought in the Los Angeles Garment District. When I finally got around it finishing it 6 months later, it was too big. I took it in but later it was still too big, so I made a second one. I used the version where it ties both in front and back to make it easier to put on. 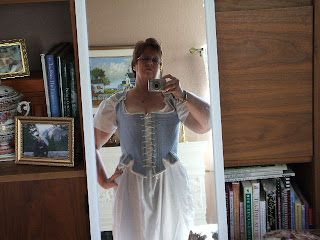 I made my muslin from the measurements it had, and the first time I tried it on, it fit. So I didn't have to do any alterations. Although a year later I did have to take in three times due to weight loss.
My fabrics were both linen blends bought in the Garment District. I bought the red floral fabric after overhearing Sally Queen recommend it to some students she had during a private tour after Costume College. Some time later I went back and bought a solid red linen to go with it. I flatlined the bodice with a lightweight twill, which made it kind of bulky, not knowing that a linen or cotton would have been more acceptable. 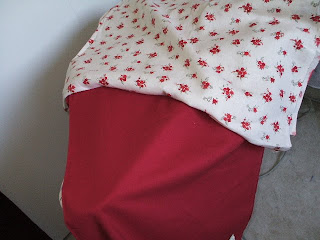 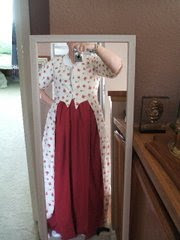 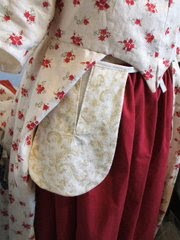 I made a pocket to go under the petticoat from a brown paisly patterned cotton fabric but it's too small so I'll have to make a bigger one soon.

My reproduction shoes bought from Fugawee. I liked these because I could change the color ribbon tied on the latchets but they were too tight in the toe box so I'm having to buy a different pair of shoes. 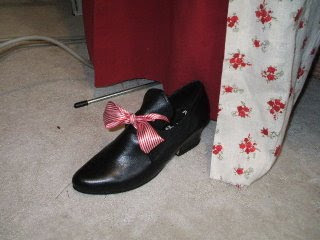 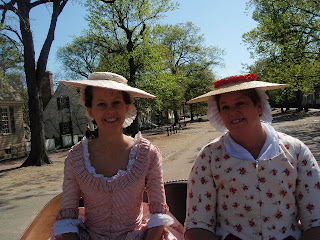 This is Barbee and I on our carriage ride in Colonial Williamsburg in April 2009. This was right after a breeze had blown off my cap and hat, and I pulled it back on. So it's really sloppy. I found out from Janea Whitacre, who works in the Milinery Store, that I needed to cut my neckline lower. It should barely cover the top of my stays. The neckline level on the pattern is generic, and is to be cut according to each person's size. So when I got home, I started altering it. Once that is done, I hope to have another photo posted here. 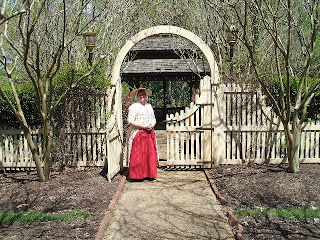 Posted by Time Traveling in Costume at 6:29 PM