The Sassy Red Bustle and A Christmas Carol

Oh, Mr. Dickens!
This event had to be written about. On December 19, I attended a Dickens Tea in Riverside, CA, to see the one man show of A Christmas Carol. It’s performed by Gerald Charles Dickens, the g-g grandson of that notable writer. In 2003 I missed seeing him perform at the Riverside Dickens Fair, mostly because I didn’t know anything about it, or who was performing. I’ve kicked myself in the butt ever since. Shortly after that I found out I could buy a cd of his reading A Christmas Carol based on his performance. 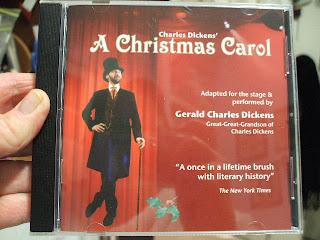 It was delightful, and I’ve listened to it each year. But it wasn’t the same. When my friends told me they were attending a tea in Riverside with Gerald performing again, I bought my ticket right then.

Yesterday we all met in the front lobby of the Marriott Hotel, where the tea was held, for a group photo at the Christmas tree. 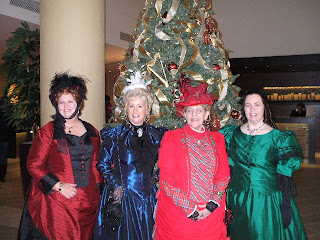 On arriving at the banquet room, I spotted Gerald Dickens right away, and cautiously approached him, asking if we were allowed to have our photo taken with him. He grinned that enormous grin and held out his arm. I told him of how I had been waiting all these years for him to return to us. 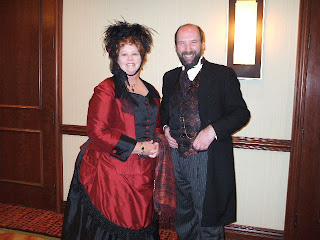 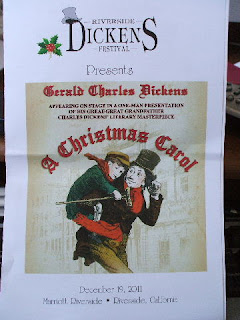 Then Queen Victoria and Prince Albert arrived, and the formalities began. 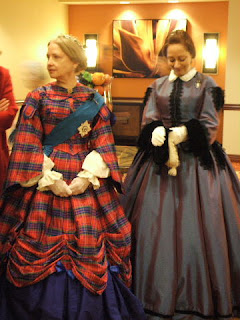 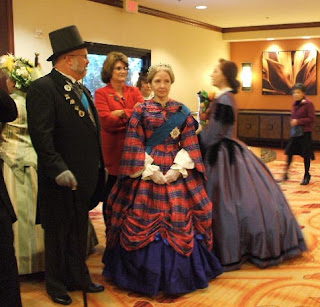 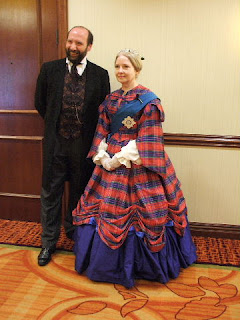 They were all escorted by their Guard to the main table.  Gerald was seated at the right so he could pop back and forth to the stage. 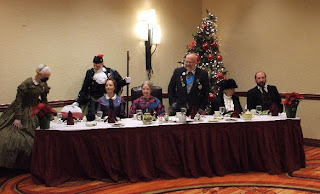 Our table was right up front and had a great view of the stage. We weren’t allowed to take photos during the performance. Gerald had a big leather chair on the stage with a small table and floor lamp next to it. On the other side was a hall tree with his top hat and cane, and short stool. These were all his props. The play was done in 5 scenes, or staves, and in between each one, the courses of our tea were served. Gerald played all the characters of the play with different voices and mannerisms, and are quite hilarious. He is joyously energetic and bounces all over the stage with waving arms. He sometimes walked off the short stage into the audience and continued his act, stopping occasionally to comment and once did a pratfall, we think, after tripping over Mr Pickwick’s chair. Mr Pickwick was very apologetic and a whole happy conversation came out of that.


Back on the stage, Gerald fell asleep after the first visit of the Ghost of Christmas Past, and was obnoxiously snoring when our next course came out. At the end of the play when Scrooge was finally ready to go out on the streets and try to wish people “Merry Christmas!” he stepped off the stage and shook hands with a few people and exchanged their greetings as he became more enthusiastic each time. He shook the gentleman’s hand next to me, then reached for my hand, raised it to his lips and kissed it, saying “Enchante, Madame. That’s the only French I know”. I think my face was as red as my gown.

Afterwards Mr. Dickens was available to autograph any of the books & characters purchased from Byer’s Choice, who are his sponsors now. I had brought my cd, and when I handed it to him, I said I bet you haven’t seen one of these in awhile. He smiled, and said no, he hadn’t. I could tell he was pleased, and he signed the inside cover of it for me. *photo from a friend* 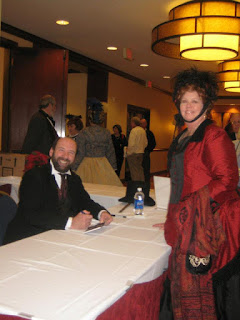 Afterwards my friends and I walked over to the Mission Inn to see it lit up with all it’s Christmas lights and displays. All along the top arches of the Mission were moving characters in tune with music being played. 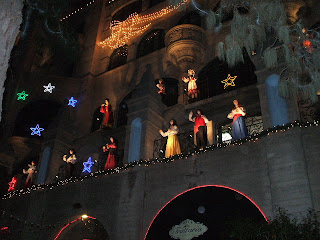 Many holiday booths were set up in the promenade square outside, and there were adorable reindeer for us to see. 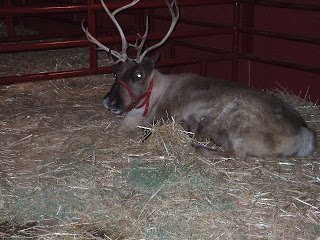 It was such a beautiful sight, and a wondrous day for me. I felt like I was stopped a million times from people asking to take my photo, which I’m more than happy to. That’s the whole point of making beautiful dresses to be admired.  We often had to say no we weren’t carolers. And my voice was still a little too hoarse to even try. 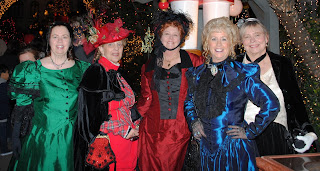 Posted by Time Traveling in Costume at 11:03 AM