Last March I quickly made an 1894 dress out of a mulberry silk damask to wear to Port Townsend but didn’t have time to make a hat. In fact, I was still working on the dress when I got up to Washington. I tried using a decorative hair comb but not having any experience in wearing one, and trying to stuff it into my wig hair, it wouldn’t stay. So, a nice evening hat was a necessity. And really this whole dress needed some finishing accessories to decorate it. I really love it and want more wear out of it. 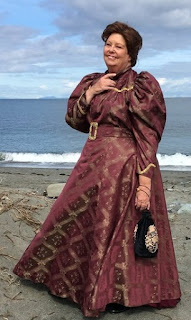 If you follow my blog, you know I love doing the research online for my ideas, and this hat was no exception. These are toques, or capotes, depending on where the fashion print or museum was from. This first picture with the fluffy pink ribbons on the top of the hat, more green ribbons and feather, gave me my first ideas. They do like height on them and I had a beautiful fluffy 6” curly brown  ostrich feather that would do that but I had a smaller 4” green one I’d brought back from a flea market in Paris (doesn’t that sound lovely?), and the green would make it pop more. I also liked the couple hats with lace along the outside edge but black velvet turned out to be my favorite. 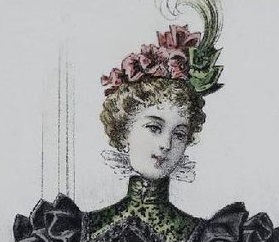 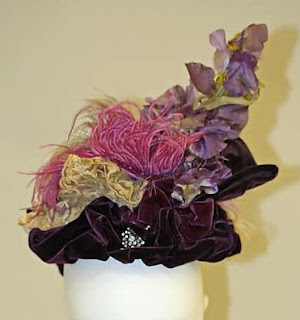 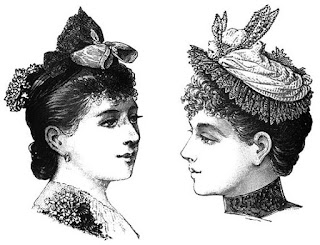 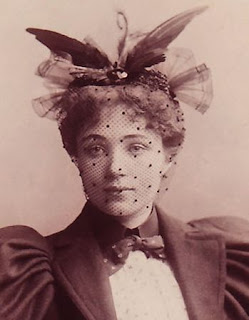 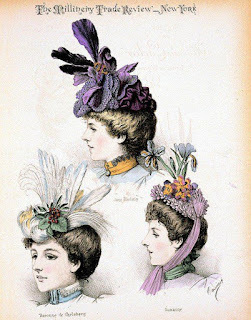 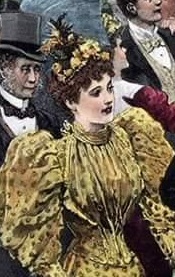 "Squirrel Attack! I want to make that yellow dotted dress and hat!"

I pulled out every bit of hat trim I had in my stash and apparently I have a trend going with my mulberry and pinks. I had some vintage glass mulberries and some little mulberry colored flowers that went well with the pink ribbon rose I’d bought at Costume College. 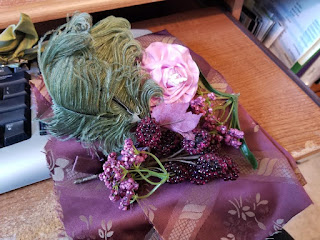 To make the base hat, I cut two rounds of buckram.  Mine isn’t really stiff so this made it sturdier with two layers. I used the base of my magnetic pin cushion to trace around on the buckram for my pattern for it. Then I machine stitched around the two to stabilize them. (Don’t use a fine machine needle, a medium one is better.) I cut out two rounds of velvet (or use whatever fabric you want as your base) about 1 inch larger than the buckram and basted over the top and bottom around the edges. Again, I used my sewing machine. It won’t show once you add your finishes and trims. 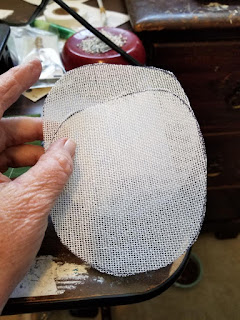 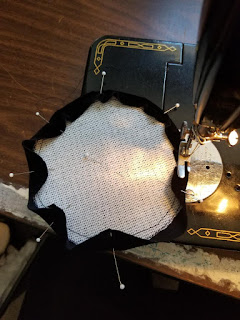 For a velvet ruffle, 40” long 4” wide, folded in half, stitch right sides together, leaving an opening in the center and turn it right side out. Run a gathering stitch along inside (or seamed) edge. Sew onto the top part of your base. I did this by hand so my stitching didn’t flatten out the velvet. The second photo shows it from the bottom. 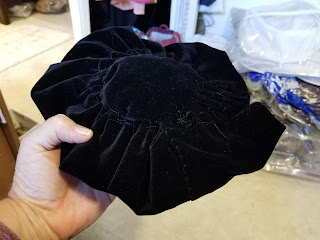 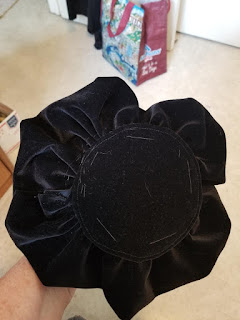 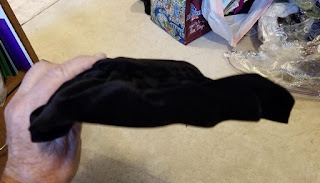 I saw a couple hats with large velvet bows on the front that I wanted to copy. I’m not really good at making bows but cut a long rectangle of velvet, a bit larger than across my base, and 8" wide. Sew it in half leaving a small opening just about in the middle so I could turn it right side out. I folded the ends in to the center and did a little gathering stitch to hold it all together then pulled the stitches to make it smaller in the middle. Voila! A Bow! This is an after-thought that I’m going to do now but I’m thinking of adding a fancy button to the middle of that bow, just like the photos I’ve seen. 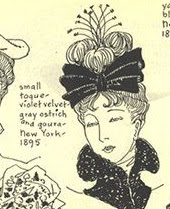 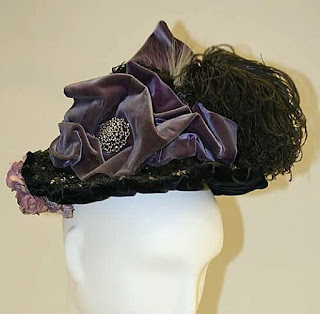 I arranged my trim pieces until I got them positioned where I wanted, and then sewed them on my hand using just a basting stitch but so it was sturdy. 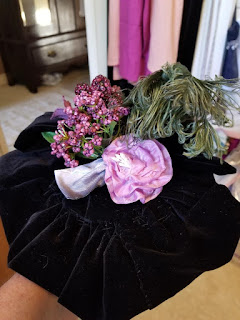 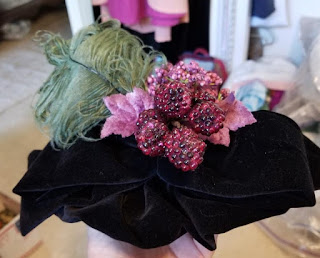 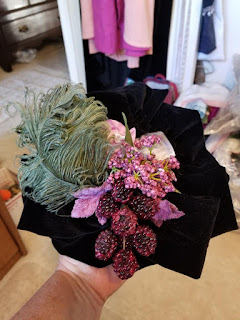 I haven’t had a chance to shop for a wig clip to attach to the front of the hat to my hair so in the meantime, I’m just using my two hatpins to hold it on. It pretty much just floats on top of your head. And more hair on your head works well too. I wore it recently in a fashion show but only have one photo that it’s barely visible in. I’ll be wearing it again this coming week for an afternoon tea and hope to get some more photos of the entire outfit. 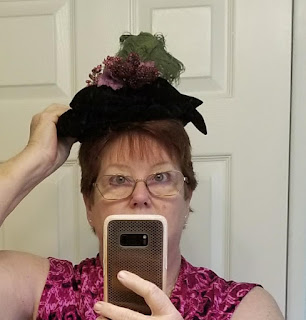 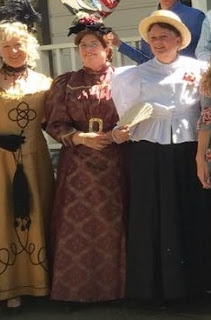 A friend share this information she found on making one of these on Victoriana. 1890s hats

All the while I was making this hat I kept thinking I would love to make them to sell, or maybe teach a class. We’ll see if either happens. Maybe next year I can offer it at Costume College as a class. 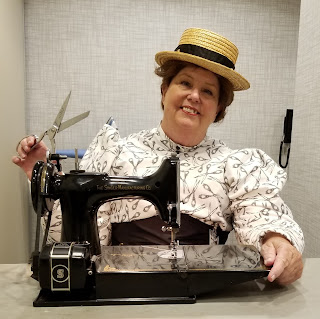