The Ghost of Xmas Past, Present & Future—a Time Traveling Ghost 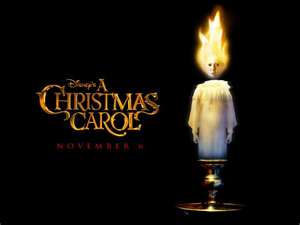 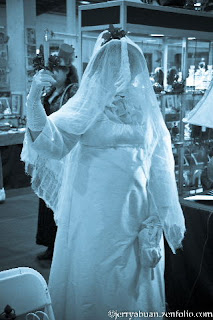 Our costume guild’s tri-yearly costumed walkabout at the Del Mar Antique Show in San Diego has covered many different costume themes; Victorian, Edwardian, 1920-1950s, Fantasy, Carnivale, & Pirate. Last January we did Steampunk (Victorian/ Science Fiction). It was hugely popular with the antique vendors, the show producer, and the public. So it wasn’t a surprise that it was requested again. And again, but this time for Christmas. Christmas? At first I wasn’t too thrilled with it because that makes it too costumey, too Halloweeny. But as other people started coming up with ideas, like Steampunk Santa, Steampunk Elf, I started thinking about it more. So how does a Victorian costumer who does a Steampunk Time Travel Agent become something Christmas? My first thought was my favorite Christmas book, A Christmas Carol by Charles Dickens. I visualized all the characters in the book, how they would dress, and even how they were dressed in all the different movie variations of the story, ALL of which I have. I kept thinking about the women’s gowns, and maybe adding holiday trim to it. But that wouldn’t make it Steampunk. Then I remembered the ghosts. The Ghost of Christmas Past, and so on. I could do that. And how to make it Steampunk? All three ghosts combined into one, a time traveling ghost! Which they actually do travel in the past & future in the story. I ended up giving myself the long title of The Ghost of Christmas Past, Present & Future, but ended up introducing myself as just the Past one.
I only had a month to make this as I would be gone for 3 weeks on vacation, so I chose a simple gown to make. I took the design for my gown from a drawing I’d seen of young Ebenezer Scrooge’s love, Belle, in her Regency style gown. This wouldn’t require a lot of work, and I had a muslin already cut to my size from my La Mode Bagatelle Regency wardrobe patterns. And I already had an ivory silk taffeta to make it from. I used the pattern for the gathered neckline of the bodiced petticoat. 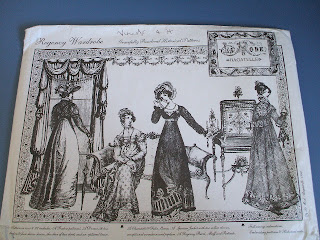 So how to make it ghostly? Obviously all my skin would need to be covered. I lengthened the sleeves, and a chemisette would go in the neckline of the bodice with a ruffle around my neck and long white gloves. Since I’m not able to move the bust line on my dress form, my gown doesn’t fit properly on it for this photo. 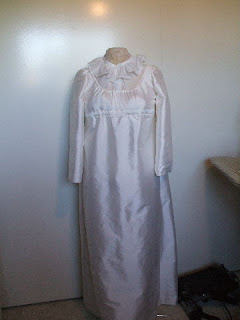 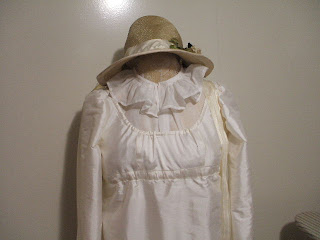 I’d seen one costumer dressed as another ghost where she used black face paint and covered her head and upper body with a layer of cheesecloth. It gave her a gauzy appearance and her face didn’t show.  Since I knew I would have to be driving to the event and occasionally people would be seeing my face, I chose to use white face paint instead that would blend into the cheesecloth. I bought a package of cheese cloth at JoAnn’s Fabrics. It wasn’t the yellowish-waxy stuff I’d seen before, but white and very soft. I used two layers of it to go over my bonnet, (that was made by Mela Hoyt-Hayden), and down to my waist. It was tacked to the bonnet to hold it in place. On the top of the brim I tacked a cluster of holly. And I carried an electric candlestick with holly around it too. 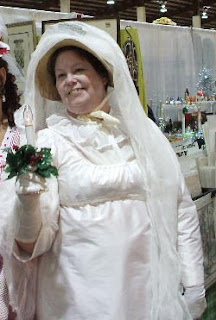 Ok, white face paint is not very attractive, but fortunately I had a cheesecloth veil. I did however forget to read my own earlier notes about getting a white wig or wearing a white cap to cover the parts of my own hair that showed under the front of the bonnet. 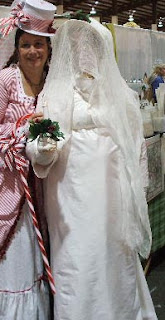 Ok, you’re asking how did I make this Steampunk-ish? My idea was to have a recording of a loud library clock going tick tock, with an occasional *gong!* to show that *time was running out”. I planned to record it to my ipod, then attach that to my mini ihome player and carry it in my Regency reticule. I found a few recordings online but none had the deep woody sound you associate with old clocks. My friend Shawn Crosby made one up for me and even though it was only 5 minutes long, I was able to copy it about 15 times on my ipod to make it play continuously. Unfortunately because the noise in the building at the show was so loud, the ticking was almost lost. But it was hilarious when all of a sudden a loud gong would play 8 times with people around me.
The day before the show I was wondering what people would think when they saw me driving to it with the white face. Thoughts of “was she going to a zombie attack?” or “maybe she’s off to see Breaking Dawn” went through my head. I’ll never know. I did see a couple quick stares which probably didn’t give anyone time to register just what did they exactly see.
And at the show I worried would people recognize who or what I was? And to my gratification, most of them did. I was asked a few times were I a bride? Of course, why not? I’m all in white. This led me to think I might be able to use this outfit again as Miss Haversham, the bride who was deserted at the altar, in Dickens’ Great Expectations. So now I’m letting my mind come up with ideas for it for the Riverside Dickens Festival in January 2012. Her gown could be trimmed with lace and I know I have lots of that in my stash. 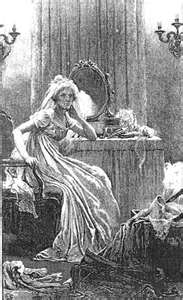 Here are a few other photos of people at this event because there were some good ones. 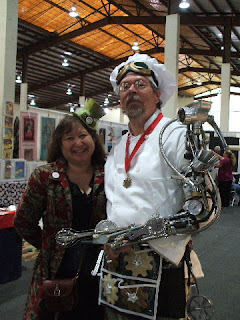 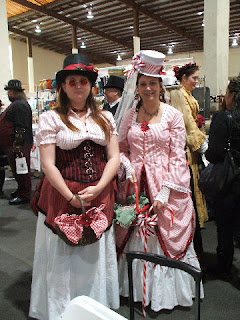 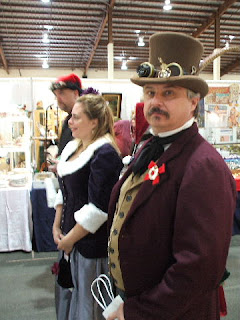 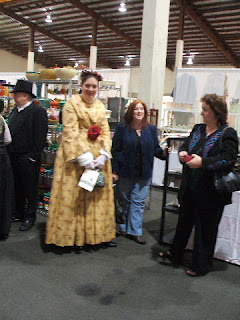 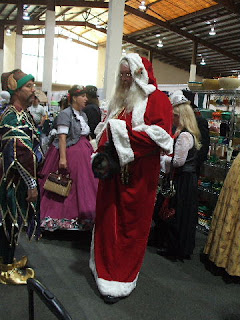 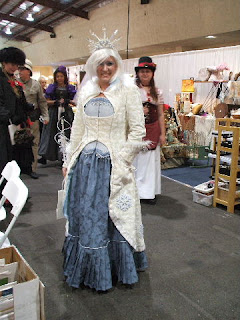 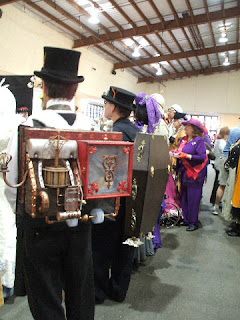 Posted by Time Traveling in Costume at 9:47 AM

Labels: Ghost of Christmas Past