May 12, 2013
One of my favorite tools when making my costumes is to get inspiration from either extant clothing or ones other people have made.
I’ve needed a square-necked chemise to go with a couple of my costumes that had square necks that I couldn’t wear a regular round neck chemise with. I mostly had to resort to one of my Regency ones that tied loosely and could hang down off my shoulders. But that’s about 100 years out of style. So what’s a girl to do?
Last weekend while attending Gaslight Gathering Steampunk & Victoriana convention, I went to a panel on Steampunk Travel after reading about the description my Facebook friend, Karin, who was on it, said about it. “Have you ever considered travel in the Victorian Age as it compares to today...or in the Steam Future? Bringing an antique travel trunk filled with history: what a Victorian/Steampunk should bring for travel, from antique dresses to underpinnings and accessories to display and amaze. Come travel with us!"
It was well worth going to it because Karin had some beautiful antique dresses and underpinnings with her that I tried to take photos of as much as I could. The drawers she reproduced with blue ribbons really caught my eye. Here’s some of her pretty eye candy. Some of these Karin had reproduced from the originals. 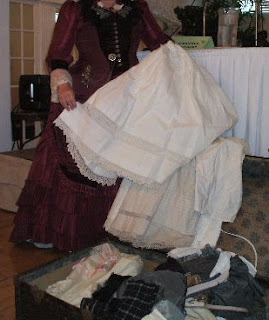 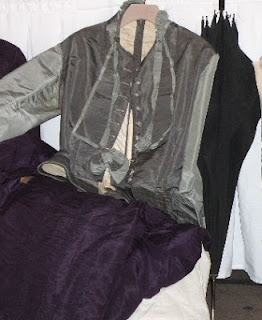 One of the items that caught my attention was a short chemise that looked like just went to the hips. Unfortunately I didn’t get a photo of it. But I came home with a plan. I needed to make some more underpinnings. Later I found a photo of an extant short chemise that comfirmed this was workable. 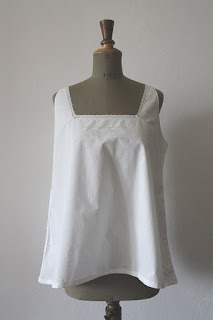 I found one of my older petticoat patterns, Simplicity 7157, that had a nice square neckline. 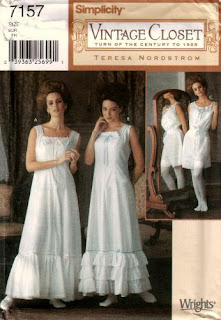 I first thought to just shorten one of the long petticoats but then noticed the short “bodice” one on the right that was for a pair of combinations, and it looked much easier to make without all the Princess seams. So I copied the bodice portion, adding 4 inches to the bottom to make it longer. Instead of the buttoned front, I changed that by cutting it on the fold.
I had about two yards left of a white cotton voile with white designs on it that I’d used for a blouse, so I was able to cut two short chemises out of it instead of one longer one.
When I first tried it on, the front was too loose. It was ok that the whole chemise is loose but the neckline was very baggy. If I was going to do a drawstring neckline that would be fine. But I wanted it smooth so I could put some pretty trim on it. I made a 1 inch seam in the front fold and topstitched it. I also did French seams on the shoulders. After all the seams were done and I was satisfied with the fit, I did a staystitch just a little over 1/2 inch along the raw edges of the neckline and armholes. I used this to turn the edges under to hem them. 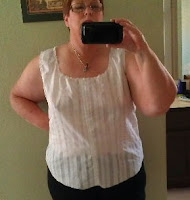 I sewed some lace from my stash on the neckline by turning under the top edge, laying it on top of the lace, then topstitching it. The bottom of the lace covered the raw edge. For the armholes and hem I just turned under the edges a quarter of an inch and machine stitched them. 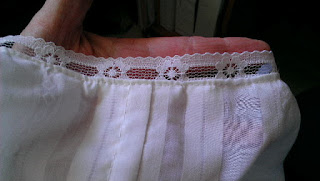 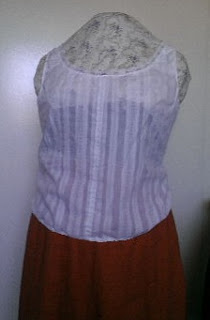 I kept the neckline loose so I can pull it down more than it shows in the photo, which will work better with my square necklines on some of my dresses. I think now I have something that can be made when I only have a yd or so left of some of my white cottons. If I have enough I may make them a little longer. But I can always use more chemises.

Posted by Time Traveling in Costume at 4:51 PM