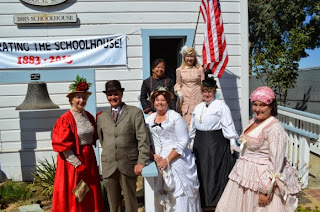 A couple weeks ago I was invited to come dressed in 1880s attire for the grand opening of the 1883 Schoolhouse in Encinitas, CA. They hoped to have a group of us for their event and to be photographed by the newspaper.
I originally thought to wear something really fabulous, like my 1885 Best Black gown, but when the weather decided it was going to be VERY hot, I knew that wasn't possible. It's an upholstery fabric, and even though its not heavy, it is dense and can be very warm itself. My next choice was my late 1870s Black & White Polka Dot that I've added an overskirt and wear a slight bustle with, so I fit into the early '80s. Its cotton and much cooler, and I always get nice compliments on it.
The day did start out getting warm, even though the schoolhouse is situated right next to the beach. The only thing that blocks the view of the beach is a row of houses. The building had at one time been moved elsewhere and later scheduled for demolition but a group of preservationists got together and saved it. Its history made it the oldest building in Encinitas and worth saving. It also was moved back near its original location near the beach. 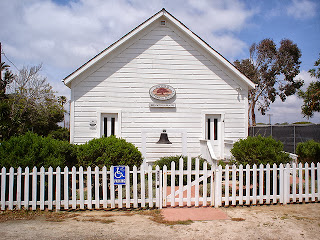 It's exactly what you'd expect a little one room schoolhouse to look like; white on the outside, and a single room inside with wooden floors. There was a collection up front of old children's school desks and various items you'd find to teach children with. It was all nicely set up. 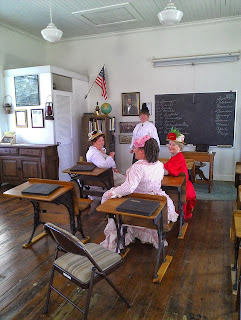 I arrived a little early and got to wander around to look at everything while it was being set up for the “birthday party”. They had a nice display of old newspaper articles on the area and the schoolhouse as it was being refurbished. Once the event began, I was still the only one there and had my photo taken lots of times. The rest of our group showed up later and just in time for the newspaper photographer when he arrived. 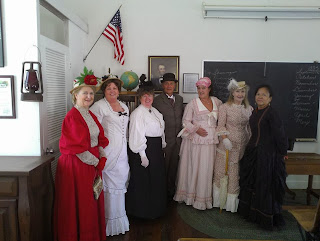 Our job was mainly to walk around and look pretty, adding a backdrop to the schoolhouse. I think we did a good job of that, and the docents at the school were very happy with us, as were all the attendees of the event.
I've been waiting for some photos to be sent to me of the front of the school, and others that were taken of me but so far have only received the two here that were taken by Jody R.
This link to The Coast News article online shows our photo (which I placed at the top of this blog entry) on the front page with our names, plus a history of the house.
https://thecoastnews.com/2013/10/residents-party-like-its-1883-for-historic-schoolhouses-130th-birthday/

Posted by Time Traveling in Costume at 3:53 PM