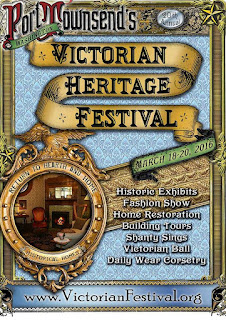 I feel like I do a lot of “costumers out-reach” when I go out of state on costuming adventures. I make an effort to bring along information with me about my blog, my pattern group on Facebook, our guilds, and Costume College, so that I can share it with anyone who shows an interest. 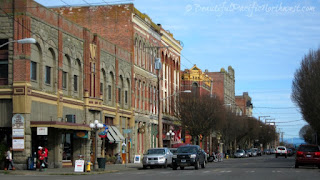 Case in point: I just went to Port Townsend, WA for their annual Victorian Festival. Each year I coordinate my visit to see my Mom who lives near there, around the same time as the Festival. I’ve been in the Festival fashion show for the last 6 years now, and many of the Seattle and Puget Sound-based costume guilds have shown up and added to it. We like to think we’ve raised the costuming level in the tiny seaport town, whose main focus is preserving their Victorian homes and history. There are streets upon streets of adorable little Victorian houses.  All funds from the festival go to supporting their historical society, and a scholarship for the school. The Festival is primarily a group of 6-8 historical interest presentations, lectures, or entertainment, walking tours of the town, history displays and demonstrations in the American Legion building, some Civil War demonstrations, afternoon teas at some local B&Bs, and the fashion show. 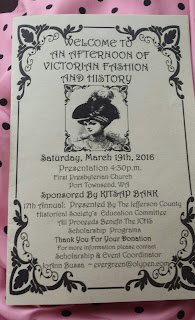 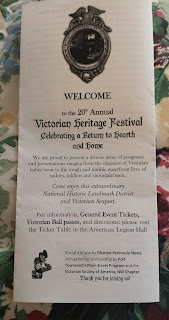 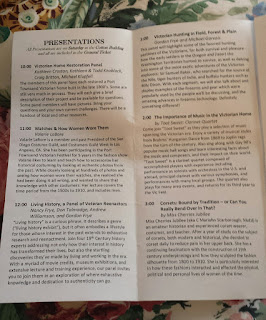 This year on top of being in the fashion show, I was lucky to be one of those that got to do a presentation for the Festival. I had offered last year to do my Watches & How Women Wore Them class for the two guilds there the next time I came up. We were trying to figure out a central location to do it and we thought since they were talking about coming to the Festival that there might be a location we could do it there. I even offered my Mom’s house. But then one of their members, Mara, said she was going to be volunteering at the Festival and could contact one of the coordinators to ask if they would like me to present my class there. She talked me up quite a bit too. After they contacted me, and I gave a summary of my class, and my credentials & resume, I got an overwhelming YES! from them. Later I learned it’s a very tight-knit community, and my being an “outsider” was unusual to be part of it.
The logistics of bringing everything with me on the plane: laptop, watch display case, handouts, and digital projector, was frustrating and would be heavy, but they found a projector in town for me to use. They went back and forth on its availability, and finally got the make & model # for me so I could download the driver to my laptop before I flew up there. The day before it looked like I would still have to bring mine but got a last minute reprieve. However when I got there it wouldn’t connect to mine due to its cable size. I sent up an “oh crap” prayer, and then suddenly next to me an attendee sitting there put her laptop on the table, hooked it up, popped in my thumb drive, and we were off. She was my angel and I wish I knew who she was. 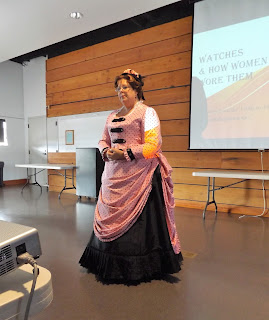 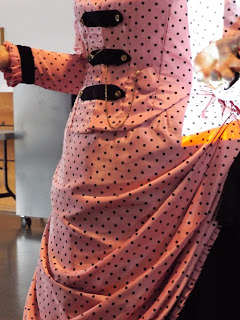 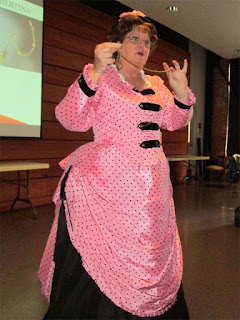 *Here’s another background story: I had my Powerpoint slide show on my thumb drive. I know I did, because I had used it at Costume College a few months ago. When I got up to WA, I plugged my thumb drive into my laptop, and it wasn’t there. Did I bring the wrong thumb drive?!!  There was one Powerpoint program on it, along with my narrative and photo files, but that one said it needed an app to open it. Panic ensued! I didn’t have the internet so phoned hubby at home to see if he could find it on my computer there, and email it to me. Then I would find a Starbucks with WiFi. But after he found it, the file was too big to email. So I spent 8 hours recreating my Powerpoint show from memory, although changing up a few photos and text on them. In the end I decided it would work.   ---Back to the day of my presentation, when my “angel” popped in my thumb drive and I told her click there to open my PP. I started talking, then indicated to her to advance the slide. It was not the one I expected. It was one of my originals. Next slide; and then I realized this was my original PP presentation! Where the heck did that come from? *breeeeathe* My presentation is mostly self-guiding so I just followed it.  Later I plugged in my thumb drive to my laptop, found the file and again it wouldn’t open. So there’s a problem, possibly with it being made on my old Windows 8.5, maybe. I guess I’ll be redoing that one. *
*My thanks to my friend Sue for taking these photos of me, and one from Julie, at my presentation.* 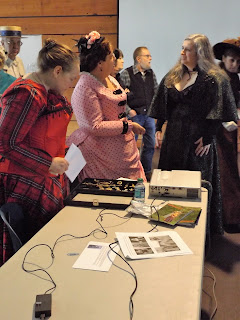 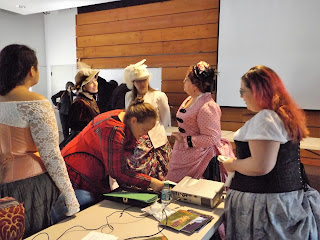 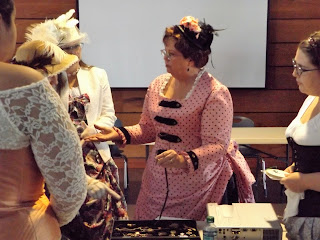 I was pleased to see almost all 60 seats were taken, and was told later that there were people standing in the back that I never saw. The lady taking tickets said it was the largest attendance she'd ever seen. I had lots of questions about the history of the watch chains and got a few laughs too. Later people approached me on the street and complimented my class, and said they had learned a lot. During our afternoon tea at a B&B the next day, the owner told me all her customers on the previous day from both seatings were talking about my class. So I think I made a good impression. I brought a lot of copies of the Costumers Guild West Squeals newsletters with me that had articles in them that I had written, and handed those out in class, along with my own handouts. I know there were some people who hadn’t heard about Costume College, and one girl who came up to me dressed in a corset and skirt was really excited to see how I was dressed and wanted to find out more about historical costuming. *YES!* *fist bump*
There were a couple ladies in the audience I had taken photos of earlier just before it was my turn to set up. I thought the lady in black looked very elegant with her antique hat and mantle but never got a front view of her. The other lady had a chatelaine on her skirt, and I hoped she would be staying for my class. She obviously had an interest. 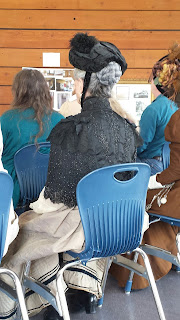 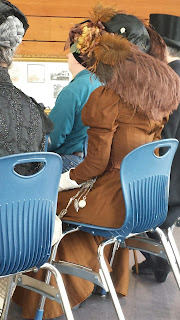 As you can see in some of the photos during my class some of the ladies were wearing their corsets on the outside. There’s a very large group of Steampunks in the area and many events created for them locally. Later in the week I stopped at one store called World’s End, when I saw Victorian Steampunk on the window. *BTW, the second photo is of a stairway entrance to some shops down below the street. I remember the first time I visited Port Townsend, I went down there and found a small antique shop that had walls of large stones and dirt. It’s a fascinating walk if you ever get down there.* 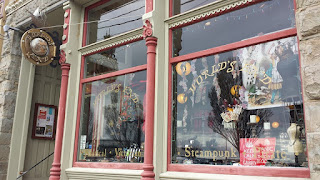 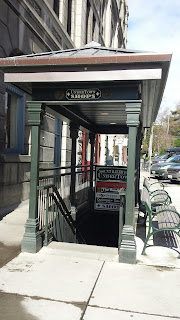 Just the word Victorian drew me into World's End but it was all Steampunk-type clothing and accessories, nothing a historical costumer would use. But I got in a long conversation with the owner, and she told me about her website that she writes short informative articles on it. She asked if I would write a short one explaining how watches & chains were worn, and tell about fobs. I never turn down an opportunity to write so I got that written up and sent it off to her, with photos, after I got back home.  Keep an eye out in the “Ramblings” section on her website for that.  http://www.worldsendporttownsend.com/
Afterwards I went walking around and found a tintype photographer set up by the Foreign Legion building and decided to try him out. He had a nice backdrop set up with props, which is better than just standing against a wall, and they actually posed me. I just sort of stand like a lump most of the time. 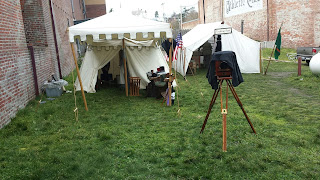 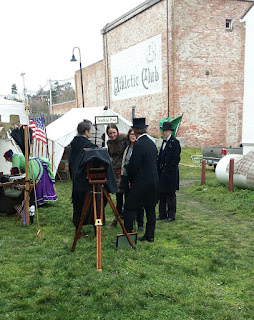 While I was standing in place frozen for my photo, the two coordinators of the Festival, Nathan & Cindy, saw me and came up to thank me for a very well done presentation.
I picked up my tintype later in the week from Jason Bledsoe and it was really nice, the nicest one I’ve ever had taken. It’s not as blurry as the photo I took of it. 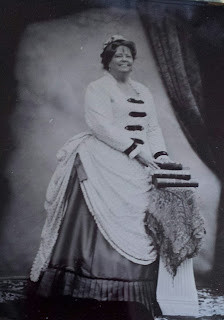 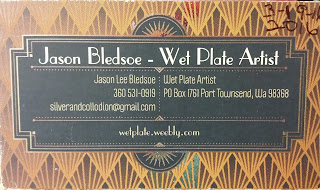