The Metamorphosis of an 1885 Dress 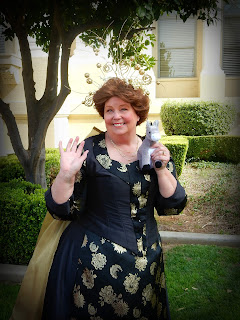 I did something different this year. I started an 1885 gown for the 2017 Costume College Gala last year in December, planning to be way ahead of the game. I replicated an Emile Pingat dress, and had it done early enough that I was able to wear it in a fashion show at Riverside Dickens Festival in Feb, and again at the Port Townsend Victorian Festival in March. At that point, it wasn’t completely done with what I wanted to do but it was wearable.

For the Riverside Dickens fashion shows, I dressed it up first as Titania, Queen of the Fairies, and carried my little donkey, Bottom, which I was shocked to discover I had been given a love potion and fell in love with the donkey. When I threw into the crowd, I heard some startled squeaks. We had fun with that. 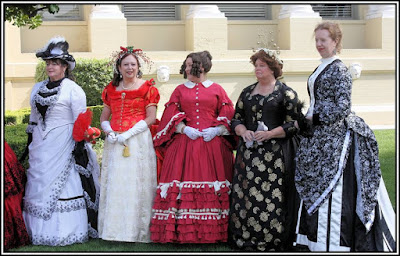 I made my headdress out of glittery gold Christmas pics that I wrapped around a covered headband. I also had added a long shimmering gold sheer cape that came off my shoulders but wasn’t very happy with it.
For the next time I wore it in the Port Townsend Victorian Festival, I changed it into a Victorian Fancy Dress, and portrayed, “Sunrise”. And I left my cape at home. My dress was obviously mainly black as night, then the glittering sun began to rise, and again wearing my Xmas-y headdress, I raised my arms and welcome the sun rising in the sky. My mom said I’m a clown. At least she wasn’t there when I tossed my donkey into the audience.
Sadly, the only photo of me from there has me sucking in my dry lips. I think I need to carry around a jar of Vaseline from now on. There was a pretty good 4 second video of me though. 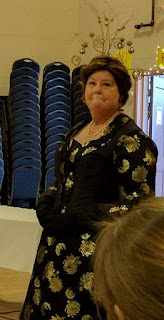 For my next incarnation, it was to become my Gala dress for Costume College. By then I had actually forgotten that’s what I’d originally made it for, until my Mom reminded me of it. And now I had time that I could really finish it, with having a couple months before I needed it.
The original dress had a black floral lace all around the hem and train. It was also on the sleeves of the dress but trying to find something like that would be too time consuming and probably fruitless. I came up with the idea of cutting out some of the gold flowers on the brocade and appliqueing them onto the hem. I did some applique on quilts years ago, so I figured I could do it. Twenty-seven cut flowers, and four evenings of hand-stitching later, I had a hem that made me very happy with how it looked. If you got too close to it, it looked clunky, because brocade is clunky. But step back two feet, and you’d think it was part of the fabric. 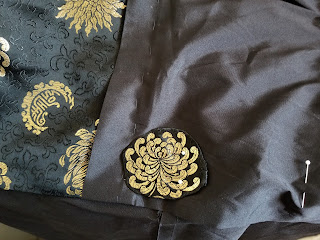 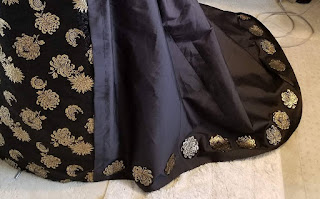 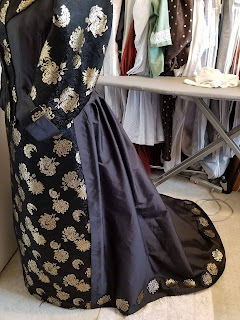 I wore my gold headdress again, with the long black gloves. I added a black beaded antique reticule from my stash, and gold beaded necklace, and I was done. 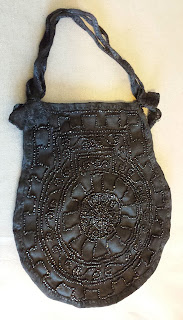 I even got some nice photos when I wore it at Costume College. This is from walking down the Red Carpet to the Gala dinner. 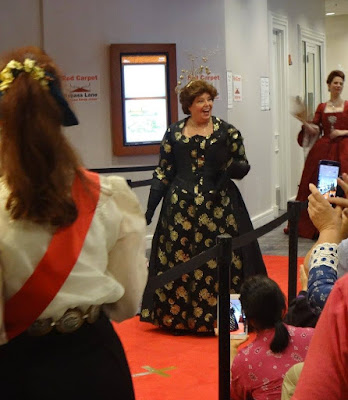 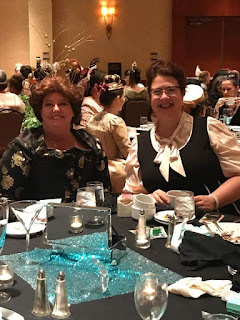 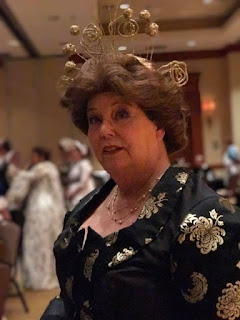 This is one of my Facebook friends, Laura, who made it to her first Costume College and we had fun getting photos together. 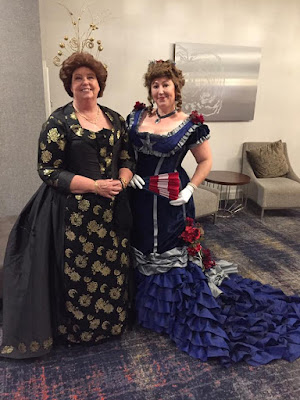 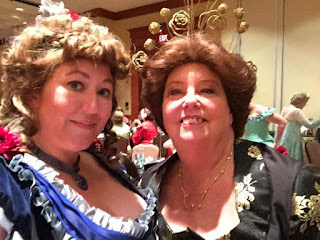 I feel like I put a lot of work into this dress, but am pleased that I’ve gotten three wearings out of it just in one year. For a fancy costume, that’s pretty doggone amazing. I wonder what it will be dressed up as next?
Oh, and the cat. Can’t forget Chloe. She did help when I was cutting out my skirt. 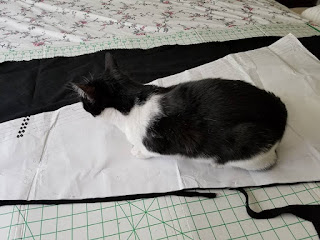 Posted by Time Traveling in Costume at 11:14 AM