1820s SILHOUETTE OF THE ROMANTIC PERIOD, or is it?

Since I’m still not sewing, I did some research to educate myself on the 1820s dresses. I keep hoping that the more I look at dresses I want to make, the more the enthusiasm will build up where I will actually start them. I even share a photo of dresses I’ve saved in my Make Me file on Facebook each day in the same hopes. So far, not much luck there.

I’ve had two mourning dresses from the 1820s in my Make Me file for a few years, and recently I decided to try and find out more about the silhouette of them. This era did a 180 degree turn from the simple and narrow Regency classicism style. I knew they had a lot of fluffy trims around the hemline, done in a variety of ways, and that the waistline was coming down from the empire waist of the 1810-1820 Regency style to almost the waist. But what surprised me was they looked so similar to what I’d been looking at and making from the 1830s. The big puffy sleeves, the hairstyles and hats were throwing me off. Then I realized that I may have been thinking some of the pictures I’d seen, that I had automatically dated as early to mid to late 1830s, could actually have been the 1820s. So, were they? Very confusing. These are the two dresses that started me on this path, dated 1825 & 1827, that I wanted to make. I’ve worn that same hair style and turban with my 1835 dresses that I copied from fashion plates of that later time period. Was I wrong? 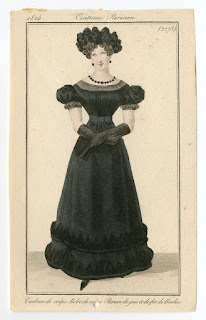 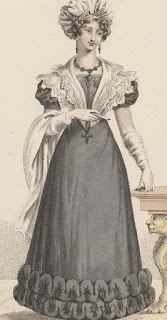 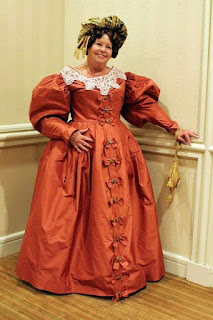 For comparison, these are two fashion plates from 1820s and 1839. Pretty similar, don’t you think? 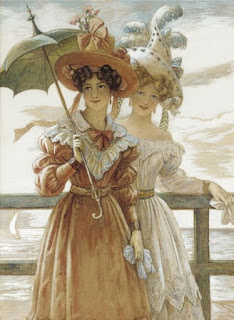 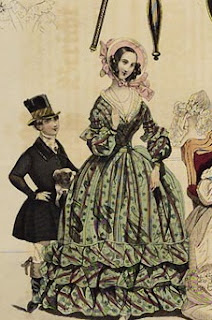 Now that I’ve been digging around on Pinterest and the internet, I’m starting to see the differences. First off, in subtle differences, 1820s skirts weren’t as full. They were slightly flared with gores on the sides, and the fullness was pulled and gathered to the back. And they didn’t have off-the-shoulder necklines. The sleeves were puffed at the top. And then of course, 1820s skirts had all kinds of fancy trimming along the hemline. From these two fashion plates, an 1824 day dress, and 1825 promenade dress, you can definitely see the waistline isn’t AT the waist yet, as it will be in the 1830s. Both of these were also in my Make Me file where the one with scallops would be made in a cotton print, and I must have a pumpkin-colored pelisse-robe that was a popular day dress style. 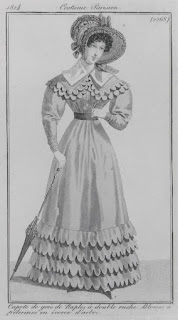 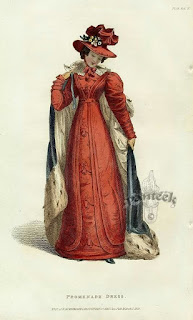 This is where a lot of the whackiness comes in, both in trims and hats. 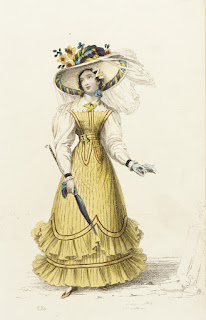 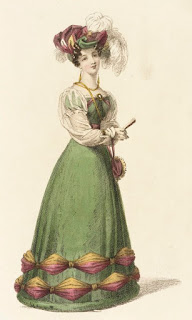 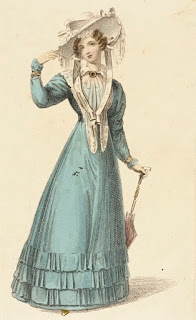 And, of course, I must have a black one. I think I have at least one black one in every decade that I want to make.

From FIT NYC, they described the changes towards the end of the 1820s.

As the waistline dropped, the skirt and sleeves widened; by 1825, the early Romantic silhouette was established with a natural waistline, large puffed sleeves, and a wide skirt with an increasing number of gores. Through the second half of the 1820s, this silhouette only became more exaggerated. The breadth of sleeves grew exponentially into true gigot or leg-o-mutton styles by 1827, and skirts became so wide that gores were no longer enough and the volume of material began to be pleated into the waistband in 1828. When the decade drew to a close, the waistline was tightly cinched, skirts had expanded into a wide bell, and the gigot sleeve had reached such epic proportions that “the upper arm appeared to be quite double the size of the waist.

So, doesn’t that sound like they’re describing dresses in the 1830s too? I’m so confused.

And this was their description of the skirt and bodice trims:

Three-dimensional trim and decoration lavished dresses in the 1820s. Skirts in particular were festooned with layers of decoration on the hem; a trend of frills and tucks began in the previous decade, but in the early 1820s this blossomed into elaborate trims of lace and flounces, puffs, and rouleaux which were tubes of bias-cut fabric filled with wadding to create a firm roll. This weighty decoration caused hemlines to shorten above the floor, and hemlines were padded with cotton or wool. 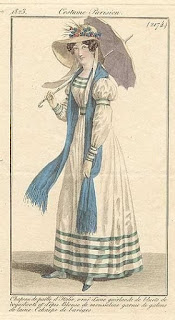 In the last years…..trim on the bodice tended to point downwards to converge at the waist. Sleeves became elaborately decorated as well, and could feature imitations of slashing, puffs, and sleeve caps, or mancherons. Edges finished with deep points were called “vandyck points,” a reference to seventeenth-century artist Anthony van Dyck whose portraits served as inspiration. Early 1820s, day dresses were often completed with a ruff at the neck. 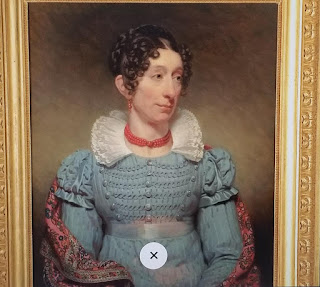 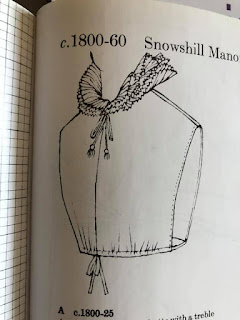 Later in the decade, wide, white pelerines were worn which echoed the “falling band” of the seventeenth century. There was a particular style of day dress that should also be noted: the pelisse-robe. Derived from the pelisse, a type of long coat, the pelisse-robe was a coat-dress worn especially in the morning for walking. In the evening, necklines lowered, and sleeves generally shortened, although in the early 1820s, long sleeves were sometimes seen. It was especially stylish to wear a short sleeve covered with or attaching to a long, transparent sleeve of gauze or net.“

Ok, so now this sounds more definitive of the 1820s, and a way to separate the styles of each decade. 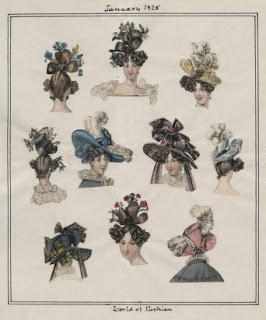 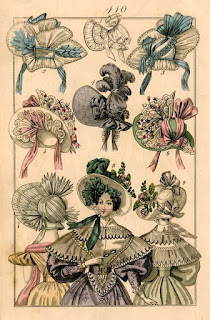 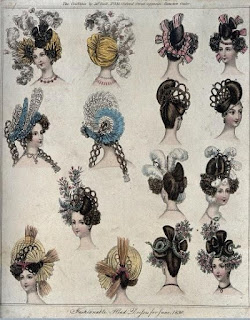 At least one thing was consistent; they’re still wearing the earlier Regency period corsets. The underpinnings could be another blog post. I haven’t made an 1820s dress yet, but I’ve worn my later Victorian corset under my 1830s dresses. This one is dated from 1825 to 1835. 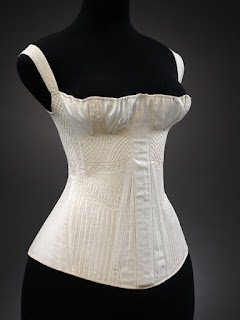 So, out of all this confusion, comes a thought. The Romantic Period was the ENTIRE TWO DECADES OF 1820 AND 1830, with the styles basically the same instead of changing every 10 years like they often do. But with a few subtle differences to the skirt and some trims. So, there you have it. Its as plain as mud, don’t you think?

Posted by Time Traveling in Costume at 11:01 AM