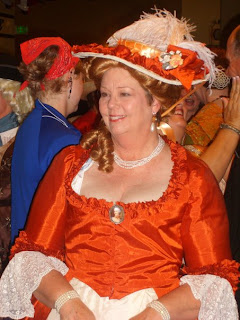 **************
Once you see this gown, you'll know why I named it The Pumpkin. It's bright orange, and is such a happy dress. It was the first one I ever named, and now it seems to have started me naming all my upcoming costumes.
I planned this gown to wear for the 2009 Costume College for the 18th Century theme that year. While looking for one I liked, I came across a painting online of Georgiana, Countess Spencer where she had on a spicey orange gown with lace flounces. I used it as my inspiration. 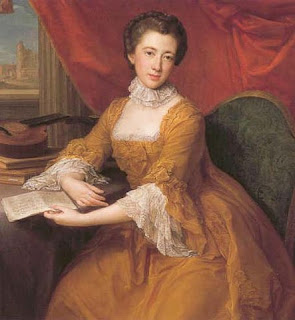 I used Period Impressions pattern for the polonaise, and just tore the length of fabrics to make the petticoat (skirt). I couldn't find a silk dupioni in an orange I liked so I bought a polyester with a moire pattern fabric in the Garment District, and the polyester "quilted" design cream fabric at JoAnn's for $1.99 yd. I lined the bodice of the polonaise with a lightweight twill but found out later these were not heavily flatlined like I was used to with my Victorian bodices. But because of this being a lightweight polyester, it was good I did so it would hold it's shape better. My friends in Williamsburg lined their's with a lightweight linen. So I'm looking into finding some reasonably priced linen I could use if I make any others in the future.
The petticoat had some weight to it but to give it a little more froofiness, I made an extra skirt under it out of silk organza. I also wore a red pinned-striped cotton underpetticoat under it.
***************
After I was shown how to cut the neckline lower than it was on the pattern, it looked more balanced on me. I used hooks and eyes for my front closure, and then sewed a self-fabric ruching around the neckline and the sleeves. I trimmed the edges of the ruching with scalloped scissors.
Ruching pinned on the bodice 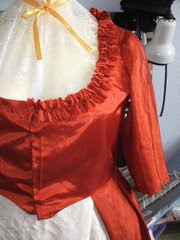 ****************
My flounces on the sleeves are two rows of lace, also purchased in the Garment Distric, and I used a JP Ryan anglaise pattern to cut the sloped shape of them. I also attached rows of self fabric ruching above them. 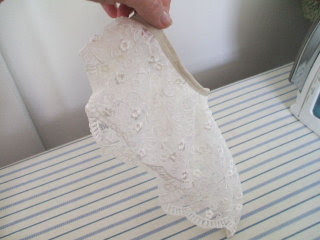 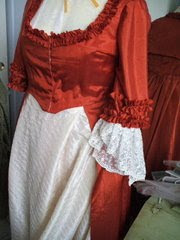 ****************
My hat was made using a straw form I purchased at the Fort Frederick Marketplace in Big Pond, Maryland, while we were on vacation. I used some of my self-fabric ruching on it, along with a peach ribbon, peach and white feathers, and some vintage orange flowers loaned to me by Angela Burnley of Burnley & Trowbridge, whom I'd met in Colonial Williamsburg. It tied down behind my head under my hair, and had a pearl hatpin on the front, which I was told was period correct.


*************
These are photos of me wearing it at Costume College
with Angela Burnley and Barbee Mullins, both of Williamsburg. 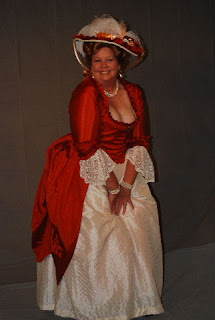 Posted by Time Traveling in Costume at 1:59 PM