With 3 days to go before my next event, an 1870s Bustle Picnic, I’m finally finishing up my black and white polka dot bustle gown that is trying not to be just another polonaise. More on that in another post after it’s done. But I still need a hat. With no hat forms in sight that would work, I decided to make my own using a technique I read recently of dropping the straw hat in boiling water and then reshaping it over *something*. I found a couple 12” straw hats at a craft store, which are probably larger than I would have liked. 10” would have been better. But we make do. 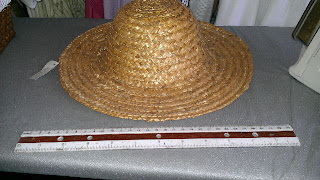 I found a couple hats in fashion prints that it would work for. The one on the lady on the right wearing the blue plaid gown, which btw I think I have to make; and the lady on the far right in the group of three. So this showed me what shape I wanted to do, and the 12” hat that I had would work for this. 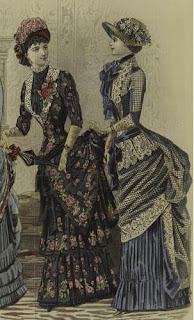 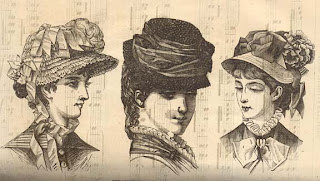 Following the directions posted in the other blog, I brought a large pot of water to just a boil. *A friend just told me she only used hot water in her sink. So I think that's worth trying too.*  I put on rubber gloves with a pair of tongs nearby if I needed those too. I dipped the hat in halfway and it immediately softened up and started to sizzle; probably just absorbing the water. My hat was a little larger than the pot but when it softened, I could actually have pushed it all the way in. But I didn’t need the crown of the very front of it reshaped. I only left it in about 30 seconds. I pulled it out just using my rubber gloves.
Then I put out 2 glass mixing bowls on my counter, one larger than the other, placed the hat over the larger one, bent the back up and pushed the sides down. Then I put a smaller bowl on top to hold the tilted up part in the back. 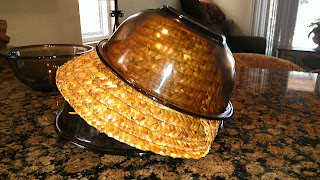 Once it had cooled I took the bowl off to let it completely dry out. *Another hint from my friend; set it out in the sun to dry. I left mine on the counter overnight and its still not completely dry.* 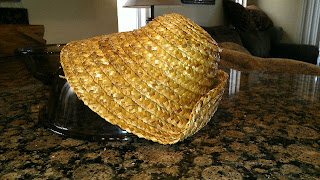 So now begins the excavation into my stash for whatsits to put on the hat.

Posted by Time Traveling in Costume at 6:13 PM