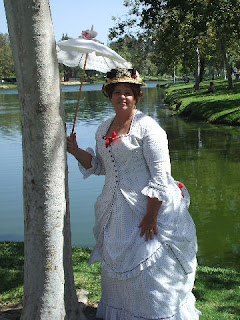 Yep, it’s the polonaise AGAIN.  Back in Oct 2009, I cut out the Truly Victorian 1873 polonaise in three different fabrics; a purple & black floral poly-blend; a green striped cotton; and a white with black polka dot cotton voile. Each fabric cost me $4.00 or less a yard. 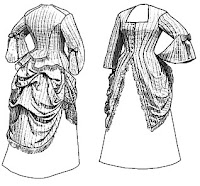 I sewed most of the parts together on all of them at the same time aka “The Assembly Line Method”, and when I decided which one I needed first, then I finished it. Later when I needed the next one, it didn’t take that much time to complete it. But by that time, I’d discovered why I had the gappy neckline and dropped shoulders at the armhole. So I’ve been doing a little alteration on them.
I was finally ready to finish the last one, the black and white polka dot for a Bustle Picnic being held by teh Historical Citizen's Association in a couple weeks up in Los Angeles.
When we last saw my gown in 2009 it was in its partially completed condition and black was being considered as the trim color. I thought that I could also wear the polonaise over my black silk taffeta skirt but I want this to be a summer outfit so it just has a matching skirt. This pattern has also been used by a lot of people and is highly recognizable so I’m thinking up ideas how to make it different. 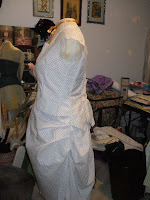 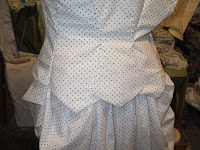 When I put it on my dress form I tried different colors for the neckline bow and buttons, and decided I liked red the best for summer. I have some vintage red with white speckled buttons for the front closure.
On the other two gowns I've made, the long edge on the front lent themselves to using a narrow black pleated trim on one, and a beaded eyelet with a yellow ribbon running through it on the other. This voile is very lightweight and trims like that would weigh it down. I found a photo online of a similar gown where someone had used a narrow black soutache ribbon along the edges that defined the edge very nicely. It also had a ruffled cuff instead of the flared one the pattern has. I’ve just been doing a straight edge on mine since I have a tendency to catch things in a flared cuff. So the hunt is on for a red soutache braid. And I’m going to cut some of my fabric on the bias to make the ruffled cuffs.
If I can find enough 1 inch wide red ribbon, I’m going to have large bows with tails hanging down on the sides of my polonaise where it catches in the side seams.

I tried the red ribbon down the front of the dress, along with some of the red buttons I have, and I’m not liking it.

I decided I want it to be a little more subtle with just an accent of the red bow at the top. So I removed the 6 red buttons I already had sewn on, and am changing them out for black. I also pulled a narrow black ribbon from my stash and will be sewing that down the front. This also brings up ideas of a black bow on each cuff, and some on the sides and back. 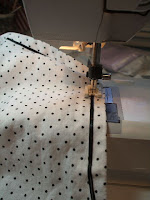 A few days later I was able to make a trip to JoAnns Fabrics and carried in my mind the type of buttons I wanted: those little round black shoe buttons you see on antique boots. And I lucked out! Lovely JoAnns did have those, although plastic ones. Unfortunately there were only 8 of them, & I need a minimum of 9 and possibly more if I decide to add them to my extra trims. But I’m sure I can find more at another JoAnns.
So now I have black shoe buttons down the front of my bodice, and started the 3 inch ruffle of self fabric and a 2 inch wide ruched self fabric to go on the cuffs. I sewed the ruffle onto the edge first, and then basted the ruched portion just behind it but with the front edge overlapping the ruffle to cover that. I’m going to sew more of the 1/8” black ribbon on top of each of the exposed stitches. 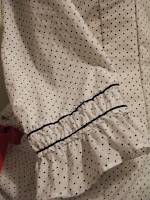 An idea occurred to me as I was looking at photos of bustle gowns online. This polonaise has been made by everyone, and I want it to be different. So I’ve decided since I have enough fabric leftover, I’m going to make a ruffled apron to go on the front with more of the black ribbon along that hem. Oh, and maybe I can do a ruffle on the hem also. I’ve already cut out an 8” ruffle to go on the hem of the skirt since it looks like it may be a tad short and only has a 1/2'” hem.  And I only have a week left to finish this *quick and easy project* I thought I had.
The Attack of the Trimming Frenzy caught me again with this gown, and the day before the picnic I had to finally stop myself so I could start trimming a hat to wear. This voile lends itself beautifully for making ruffles and I may be doing more now that it’s been worn and I have time before I wear it again. J
I really liked how the apron came out. I just used the front portion of Truly Victorian’s #208 bustle and attached a narrow waistband to it to go around my waist and button. On top of all the ruffles I was doing, I sewed the thin black ribbon on top. For the larger areas of ruffles, I basted the ruffle down by hand, then held the black ribbon on top and sewed all of them together on my sewing machine. It made it much quicker. 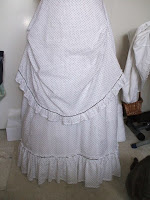 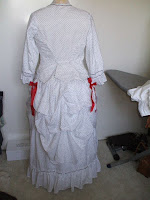 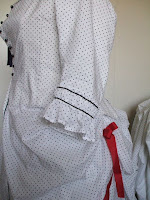 I wanted to have ribbons on the side of the polonaise and the red grosgrain ones worked out fine but now I’m thinking maybe silk or satin would look better and softer. It seemed kind of silly to put another bow on the back of the peplum above the pleats but it does need something there, so I covered two buttons in self fabric. They kind of disappear into the fabric though. I’m actually thinking maybe navy blue or black for the ribbons may be a better choice than red. And I think I’d also like to add some ruffles around the square neckline. About three days before the event I tried the polonaise on and found the bodice was too loose, so I moved some of the buttons over. The day of the event it was too loose on the top so I need to move those three buttons over too. This was because I remembered to tighten the top portion of my corset this time.
So having put a halt to further trimming, I started on my hat, which was seen in my previous post in the reshaping stage. I wanted to use trims from my stash, and had a group of vintage tiny white flowers but not enough to fill the hat in. So I included some newer white ones too. And to add red, I had some vintage cherries. I hand tacked a black grosgrain ribbon around the crown to have something to attach the flowers to. I still didn’t have enough flowers so I made a large bow of the grosgrain to go in front, and added some flirty black ribbons trailing in the back. I’m still not totally satisfied with it, and after seeing someone else’s similar hat at the picnic, I'm stealing her idea of having a narrow black velvet ribbon around the top of the entire brim. It finished it off very nicely. So the hat is still a work in progress. Following the style in a fashion print, I wore the hat towards the front of my head slightly tilted. 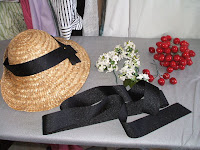 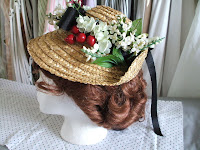 The day of the picnic was a lovely day and held in the beautiful green Craig Regional Park in Fullerton, CA. near a small lake. We were away from the main picnic area and tables where most of the public went and parking was close by so we didn’t have to walk far in our bustles. We even had a dessert contest and my friend Trudy and I both won first prize for best dessert. 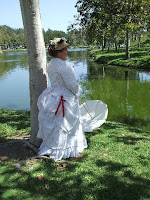 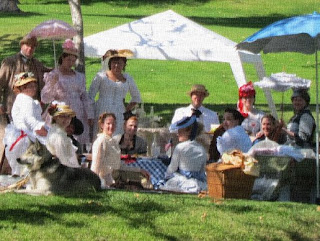 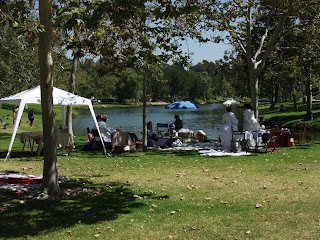 This was taken by my friend, Trudy. 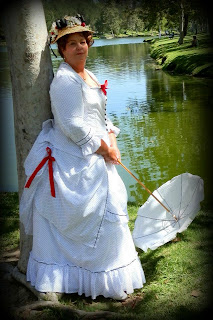 You always have to have some oops included in your projects, so I discovered mine the night before when I was ironing my skirt. I found one panel had been sewn in upside down so it was narrower at the hem and wider at the waistband. It’s not throwing it off too badly but now I have to decide if I want to take the waistband off that portion, remove the ruffle at the bottom & widen that, and take out two side seams to put it to rights. Am I that anal? Naw, don’t think so!  Onto the next dress!

Posted by Time Traveling in Costume at 11:58 AM