Costuming isn’t just for dress up

I was telling some of my friends the other day that I was going to have my first experience at being a docent and volunteer at a historic home tour and would be in costume. One lady reminded me that this really wasn’t my first time and it started me thinking.
Ok so back in 2004 just as I was starting to get into costuming, I began working at the Chula Vista Historic Home Tours each year but mostly with setting up the Tea Garden and some displays there. Over the years I took over doing the afternoon tea portion of it. Our costume guild was asked each year to come in costume and we got to tour the homes for free. 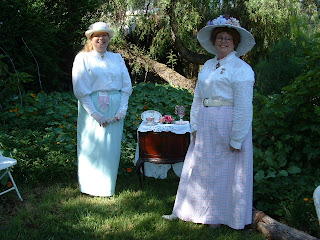 And then there’s the museum presentations at Balboa Park, San Diego, where our costume guild is often asked to come and be part of the background of the exhibits in various costumes. We’ve been part of the Harvey Girls exhibit, and the Toulouse Lautrec and Gainsborough art exhibits. The Park has been the location of many of our own events, such as picnics, and attending the recent exhibition of the Titanic artifacts.
I can’t count how many fund-raising fashion shows I’ve been part of, along with other guild members. Some were large, but most were smaller groups. And there’s the festivals, that lately I’ve spent more time being in their fashion shows than just seeing the festival. I’ve even included being in them on my vacation and dragging my Mom along in a costume. This also gives me chances to wear some of my gowns more often, and get more use out of them.
Some of the events we do have freebies with them, like the Costumed Walkabout we do about 2-3 times a year at the Del Mar Antique show, where we get to attend free. The show’s producer picks a time theme and we all come dressed in it. He and the dealers like how we give an ambiance to the show. It’s actually one of my favorites now because I love to shop at antique shows, and the dealers give us discounts. I like to find antique/vintage accessories I can use with my costumes, and I find some great fashion prints and old photos for inspiration.
And I can’t forget the times our guild has been invited to our local middle schools to be part of their history days. So far I’ve done Renaissance, Civil War, and Colonial time periods with them.
So as I mentioned, I just did what I considered my first time as a docent at the Burlingame Historic Home Tours in San Diego last weekend. It was a group of six 1912 homes, and our guild was asked if anyone could come in costume, or display their costume. They also asked if any of us would want to be docents. I decided to give it a try. Once arriving at the home I was assigned to, the group of four other docents I was with unanimously decided I should be the one to be standing on the porch greeting everyone as they came in. So I was the official “porch ornament” on display. I managed to come up with some historical details about the house to give each arrival a background of the house they were about to see. 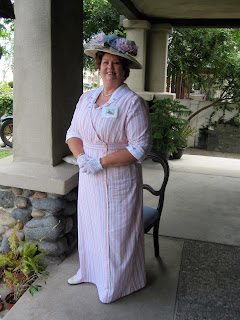 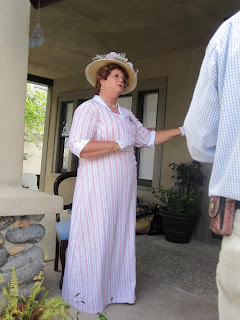 Four days later I was dressed in 1770s to represent the Colonial era at a middle school during its History Days. It turned out to be a mini Marching Through History with some Civil War soldiers, and a group of Buffalo Soldiers. We all set up as “stations” and a different group of 10 students came by every 5 minutes where we would share some historical information with them. The Civil War soldiers lined them up as inductees and drilled them. It was my first time meeting Buffalo Soldiers & I would have liked to talk to them but we only had time to exchange introductions. But when I got home I went to their website to learn more about them. http://www.sandiegobuffalosoldiers.org/ 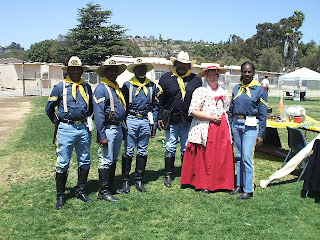 Most of the time when people ask me why I do this, dressing in costume, I usually say I just like to play dress-up. But it looks like lot of it is volunteer work, and part of our guild’s plan is to educate the public. Fortunately that too is a lot of fun.


This weekend I’ll be traveling forward in time to 1870s and having a lovely bustle picnic with the CGW in Los Angeles.
Posted by Time Traveling in Costume at 9:19 AM