You can learn something new every day

June 26, 2012
Just sharing some Pearls of Wisdom here.
I repeatedly have said to myself and others, that I learn something new every day, even when I thought I knew everything. Case in point: sewing. Oh, that’s right. You who know me know the problems I have in understanding patterns and directions. I can understand far more when I have an actual gown in front of me and see how its sewn, rather than reading the directions on how to do it.
Right now I have two gowns I’m working on for Costume College; one is my 1905 voile gown, and the other is my “Secret Squirrel” project, which came to a roaring stop the other day when the directions weren’t the same as what my dress was doing. How many times has that happened? More on that foopah later.
I’ve been going along merrily sewing my Truly Victorian 1905 circular skirt and blouse/waist with no problems. And I might have continued that way if I hadn’t had the chance to socialize with Heather & Laura McNaughton of Truly Victorian last Sunday. My friend Cat and I were attending an open house & ice cream social at the Heritage House in Riverside, Ca. I was joined by other friends in costume, mostly 1890s-1908, and supporting our friend, Tonya, who’s a docent at this beautiful 1890s historic home. Besides having some yummy hand-cranked ice cream, it was a beautiful place for photos and I can’t tell you how many times we were stopped and asked by people to have their photo taken with us. 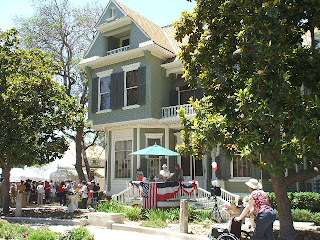 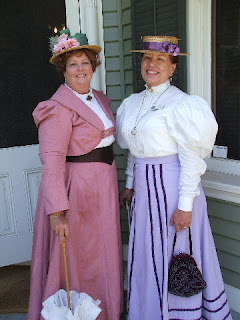 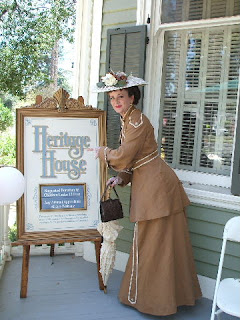 Heather & Laura showed up, both dressed in their TVE 1905 blouse & skirts, with Laura wearing the circular skirt like I’m making, and Heather wearing her trumpet skirt. Seeing these skirts in person really shows you how beautiful they are made up with fabric. I was fascinated by the back of Heather’s skirt enough that I took a close-up of it. *Sorry Heather* But look how pretty the pleating is at the bottom of the closure. It’s kind of closed up in the photo but when she walked, it spread out like a fan and looked so feminine and graceful. I’m already thinking of when I’ll have time to make one of these skirts too. 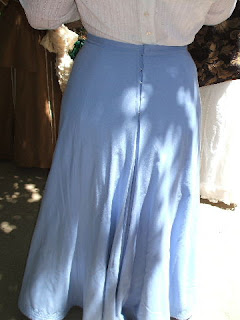 Then I started looking closer at her blouse and noticed her high necked collar. She said it was shorter than the original because she doesn’t like it that high. I can so relate to that, so I too am going to shorten mine. I was using the round Stock Collar. Then I was surprised when I saw her collar was only attached in the front, what I could see, by her brooch. She said it’s a Stock Collar, which means it can be removed easily for washing or changing out. I’d heard of Stock Collars on men but had no idea what that really meant or that women wore them. She did say you CAN sew the collar directly to the blouse, which was what I was going to do as I was merrily sewing along. So that was my first new learning thing of the day.
Later in the day we all headed back to their beautiful little 1913 house and sat around talking patterns and sewing; even the guys. 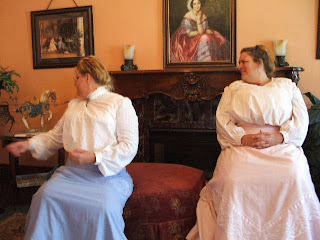 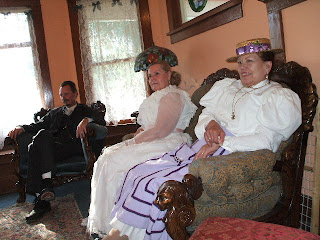 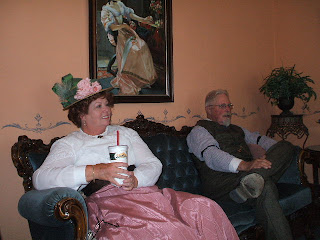 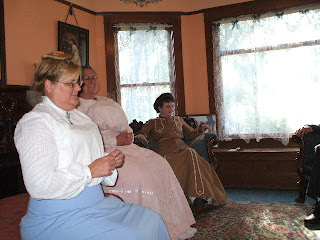 I started asking Heather questions about the different things I’d made or worn from their patterns, and then asked why my corset kept riding up from my waist. She said the hips were too tight. I said I tightened mine to try and flatten my stomach but she explained that Victorian corsets are meant to be hour glass shapes, so it's only tightened at the waist, and looser at the hip and bust. I was wearing an 1890s skirt but I should have been wearing an Edwardian one to keep my tummy flat. That was an eye opener! I think I’m going to try this same outfit with my TV 1903 corset next. So that was my second new learning thing of the day.
My third new learning thing was going to be a separate post altogether but I’ve decided to include these all in one. A short while ago *someone* (I can't remember who) suggested when I make the bodice, to mark and finish the closure first, then do the side seams to get a better fit. I was used to following the pattern and doing the shoulder and side seams first then finish the bodice closure last. I would struggle to get the closure lined up. Often it had to be closed over farther on the top than the bust, and more at the midriff. And sometimes it wasn’t big enough to even close. So out came the seam ripper after most of the bodice had already been finished. They don't call me Mrs Ripper for nothing! So with this method I would sew the shoulder seams, and fold the edges of the closure and finish it to where it was ready to have its buttonholes, or however I would close it, done. My first try at this was with the TVE 41 1903 blouse/waist I'm working on. 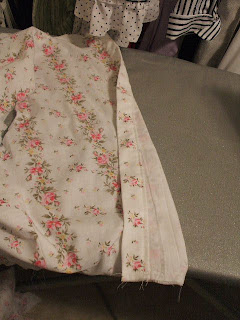 I closed the placket with safety pins, put it on inside out, and then marked the sides on me with pins. I un-safety pinned the neck enough to slide it off me. This made it so much easier, especially since this one closes in the back. Other than taking it in a tad bit more after taking it off, it fit and closed beautifully the first time.
After looking at the photo I’d taken of the back of Heather’s skirt, I had another “ah hah!” moment. I could do the same method with the skirt closure. With previous bustle gowns, I’ve been happy that they had bustles and peplums going over my closures on the skirt because my plackets aren’t pretty. And that’s because of the same problem. I thought it fit when I put the waistband on but I think all the thread you use to sew it with makes it bulkier and takes up any excess you might have had.
Don’t believe that, huh? That’s all I can come up with.
I now have a sign hanging over my computer that says, “Mark closures FIRST on patterns”. It’s right next to “10 am, START SEWING”. I should change that to 3pm because that’s the time I start feeling like sewing.
And I would like to publicly thank whomever it was that gave me this suggestion to do the closures first. *kisses*
**Here's an additional tip from Jennifer Rosbrugh of Historicalsewing.com: When you're fitting your muslin, take into account that your flatlining/lining plus any bones if used, will take up some of the fabric causing it to be a bit smaller. This applies to my method of doing the front closure first. At this point you should already have the flatlining (or possibly lining) done, but if you will also have bones, take that into account.**

Posted by Time Traveling in Costume at 4:23 PM