June 28, 2012
Once again my blog entry comes from a conversation I started on Facebook, as I complained that my tower of unstored hats had come crashing down. These are ones that I don’t have hat boxes for them yet. Other friends commiserated with me, and gave suggestions. I do have a method to my madness, just not enough boxes to contain them. So here we have proof of my OCD with costume hats. Each of these boxes have small photos of the hats inside them. It’s hard to see but there’s a tall glass vase between the first row that I have my extra long hat pins in. It held many more than those cute little hat pin holders you can buy. 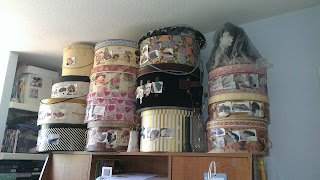 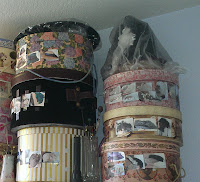 That’s not all of them but they’re reached the ceiling already. There’s still the short stack of hats behind me, and a square hat box that is temporary housing since it’s not very strong. It’s similar to that white one up the upper shelf on the left. That one contains a bunch of blank straws, derbies, and a top hat.  Surprise to me that in that box I found some already reshaped small straw hats I had and could have saved me some time when I had to run around looking for regular straw hats and then steam and reshape them. *sigh*
After reading an article on organizing your stash, one of the suggestions was to make a list of hats in each hat box and tape it to the box. Except it took me too long to read, and that list changed sometimes where I was scribbling all over it. For my hats I came up with the idea of attaching photos of each hat to the box with just bits of Scotch tape so if I moved the hat to another box, the photo went with it. The photos are mostly about 3x3 inches. I have a photo album in my computer of all my costume hats. Most of them were just taken by holding them in front of my camera but some were taken with me wearing them. I just printed the photo and cut off the portion I needed. I use a Word document and Insert my photos onto it, then print it out and cut them to the size I want. 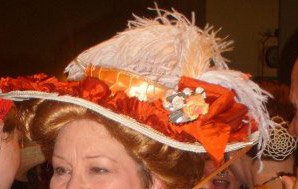 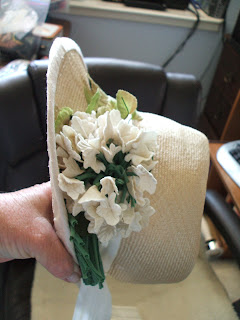 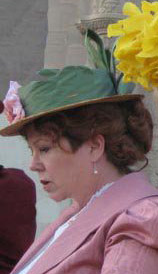 They don’t have to be fancy, just clear enough that from about 4 feet away you can see them right away on the boxes. I have about 76 hats, and that includes tiaras, day caps and little hair ornaments.
**ETA--at the request of one of my readers, I downloaded photos of most of my hats onto my Pinterest board. I left off the hat blanks, tiaras and day caps.     http://pinterest.com/timetravels/  **
I wrote an earlier post about organizing my pattern collection into a small notebook I can carry with me when fabric shopping. http://timetravelingincostume.blogspot.com/2011/05/diy-pattern-organizer.html
Posted by Time Traveling in Costume at 1:52 PM