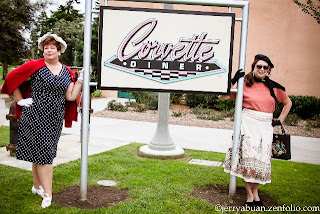 I have consistently said I didn’t want to wear anything later than the decade I was born in. Or dress like my mother. I want to wear the graceful long skirts and corsets. But the past two years I have missed out on the ‘50s Bash at the Corvette Diner with our guild. Since I don’t want to, or have time to, make something from the 50s, I’d been on a vintage hunt for the last 3 months. With the help of my friends, Cindy & Cat, we scoured flea markets, thrift stores & vintage shops for a dress and all its accessories. I lucked out on a 1950s vintage dress at Frock You in San Diego during one of their sales and only paid $35 for this. It has a self-fabric one inch wide belt and is made of cotton. Read= washable. I first wanted to add red accessories. I found some red shoes on sale at an antique shop for $10, a pair of red button earrings for $5, and then made an investment of an antique Bakelite bracelet.  But finding a hat was harder. 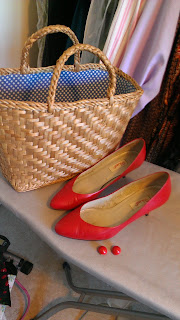 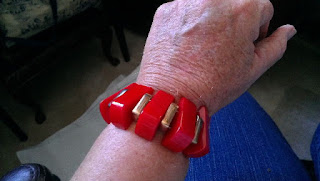 Soon after I bought the red shoes with its narrow heel, I ended up having Achilles tendonitis. So wearing them was out of the question. My friend, Cindy, convinced me to make it dressier and said I needed white accessories. So after finding this pretty white floral hat at a flea market, I was encouraged.  It makes me think it’s easier to start with the hat and then find accessories second. 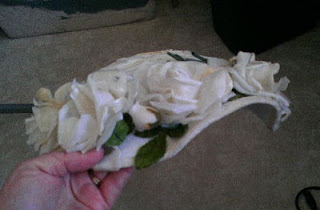 I saw a white square basket purse I could use but was convinced it could be found cheaper. I also bought a pair of white-on-white embroidered gloves that belonged to the seller’s grandmother. I told her that her grandmother would be going to a lot of costumed events with me. I couldn’t find any shoes that I could comfortably wear and after being shown a vintage shoe ad for 1950s that had a 40s-style shoe, I bought a pair of dance shoes from dancestore.com .  But even though it was two months after my injury I wasn’t able to wear them very long, so I reverted to a pair of white flats I have. I have yet to find a purse but I’m not sure the 50s are in my future unless it’s next year at the 50s Bash. 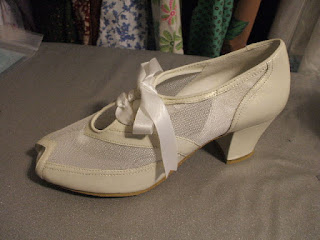 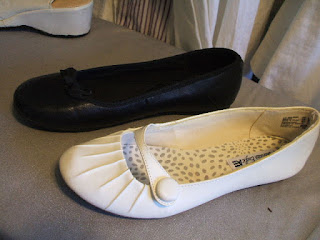 I put what I had together and took some test photos, mostly to see how it all looked. I added a pearl necklace, clustered pearl earrings I bought in WA for $4, and a cheap pearl bracelet. I tried wearing a curly wig I had with it but felt it was a little long and full. I didn’t want to cut it either. *See the little neck straps in the second photo? That’s part of the trim made of self fabric ending with a bow on the front.* 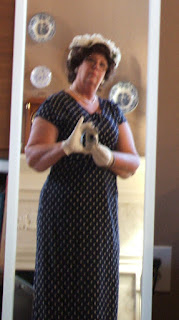 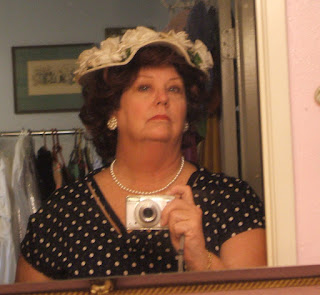 I started searching for photos of models and movie stars of the 50s for hairstyle and makeup ideas. My favorite was these two short haired ones, one being of Audrey Hepburn, a very classy lady. I decided my own short hair would be fine. And I got a good idea of how to do my makeup. My first impulse was to wear bright red lipstick. I’m dying to do that. But it was recommended for my skin tone and hair color that a pinkish-red was proper. Darn. 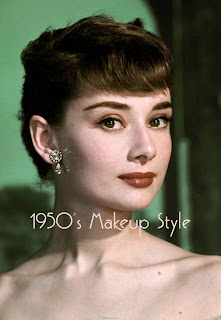 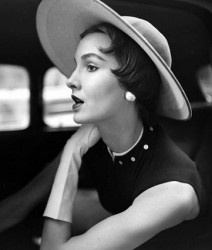 So this is my first attempt at 1950s Makeup Style. 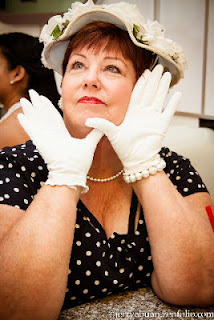 After our lunch at the Corvette Diner, they asked if we all could do a fashion show for the other customers. Being show-offs, we agreed. It was at this point that I realized flat shoes would have been better, but I made it through. 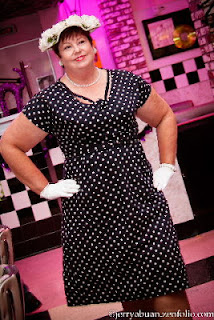 Later we did a fashion shoot outside with Cat's vintage truck and glammed it up.  By this time I had put on my little red sweater and I was handed a pair of sunglasses and white purse for the photo. Oh Lordy, I look like my great-aunt Esther again! 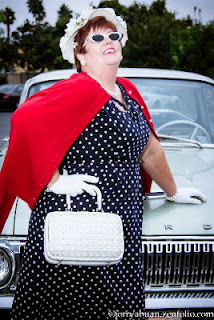 Posted by Time Traveling in Costume at 8:31 PM