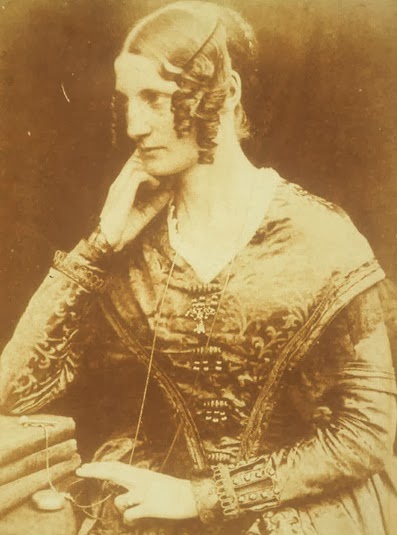 I’ve been fascinated by watch chains for the last couple years after I first started noticing the watches women wore during the 1800s. Actually both men’s and women’s were interesting. I even have two watch chains. This black one is a man’s. I’m not sure yet of the gold one but it’s a pretty one. The black one was purchased in the Port Townsend antique mall and could possibly be a mourning one. The dealer thought it was made of braided hair but after I inspected it with a magnifying glass, it turned out to be braided silk. And it’s in really good condition.  I think I bought the gold one in an antique flea market somewhere. After looking at some of the photos I’ve collected of women wearing watch chains I think this could easily pass for one. 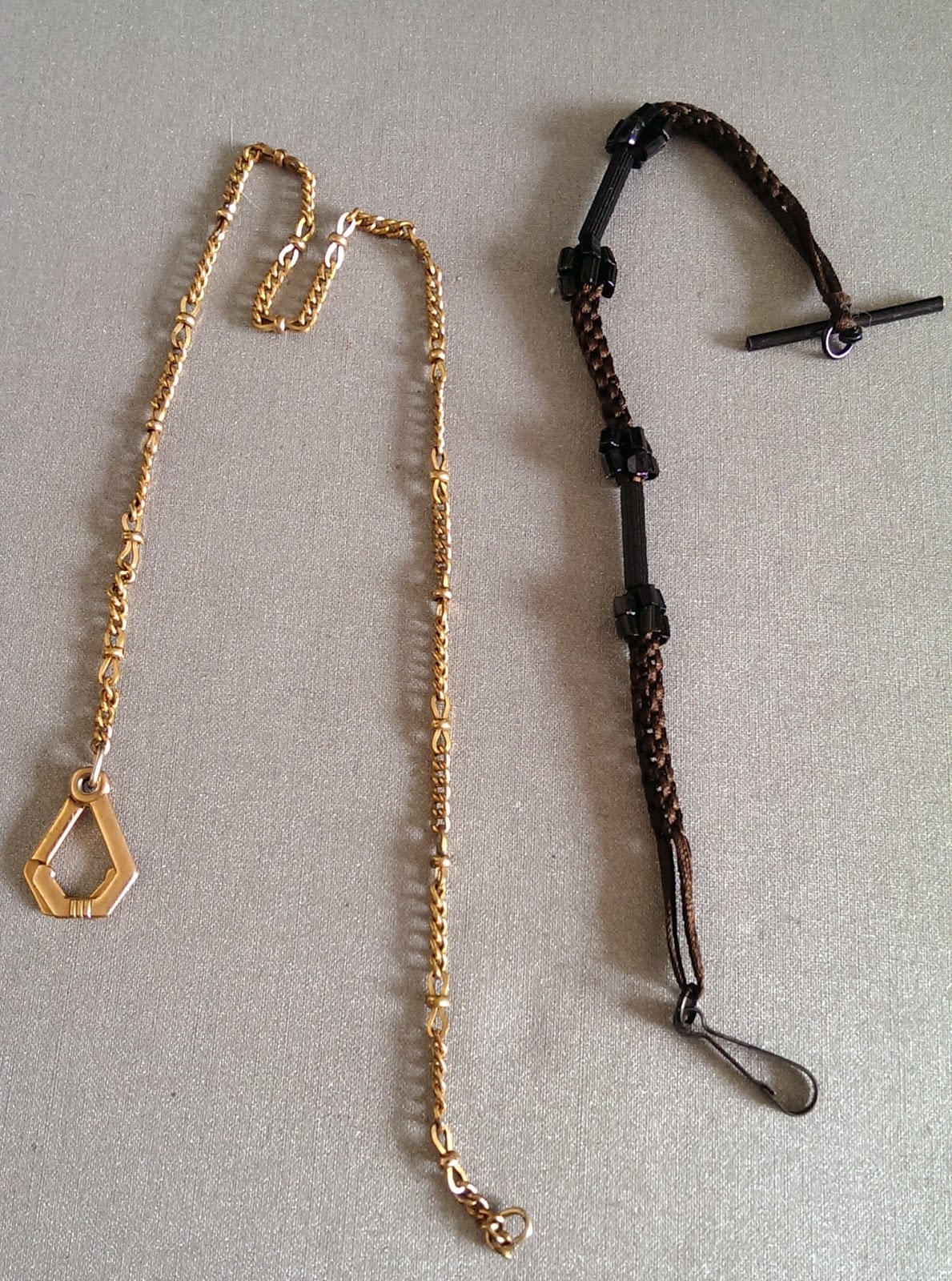 Women’s watches are hard to come by. I had a cheapie Victorian Trading Co. one I bought in the gift shop at the Museum of the Confederacy in Richmond, VA, but after using it a couple times the stem snapped off. So at this point I knew I had to come up with a better option instead of a reproduction one.
I did my usual search for watches and the majority of them, it they’re still working, are way out of a “costumer’s budget”. I even carried a fake one that didn’t open. While in London in an antique mall I stopped by one booth to get a little education from the dealer on women’s watches. Of course the little tiny ones that were beautifully decorated were a king’s ransom. But the majority of ones I was seeing were larger about 1 1/2 to 2 inches wide and mostly were just engraved.
I had some small brooch type watches that I pinned to the bottom of my 1880s bodices and I thought they were quite cunning. Except I found out they didn't start wearing them with these until the late 1890s, and were up near the shoulder. The gold watch is a modern repro, as is the silver one. The gold brooch, another antique flea market purchase, is made for hanging a watch or pendant from. The silver one was made to use as a chatelaine that I bought at Lacis in San Francisco. Both hang about 3 inches altogether. 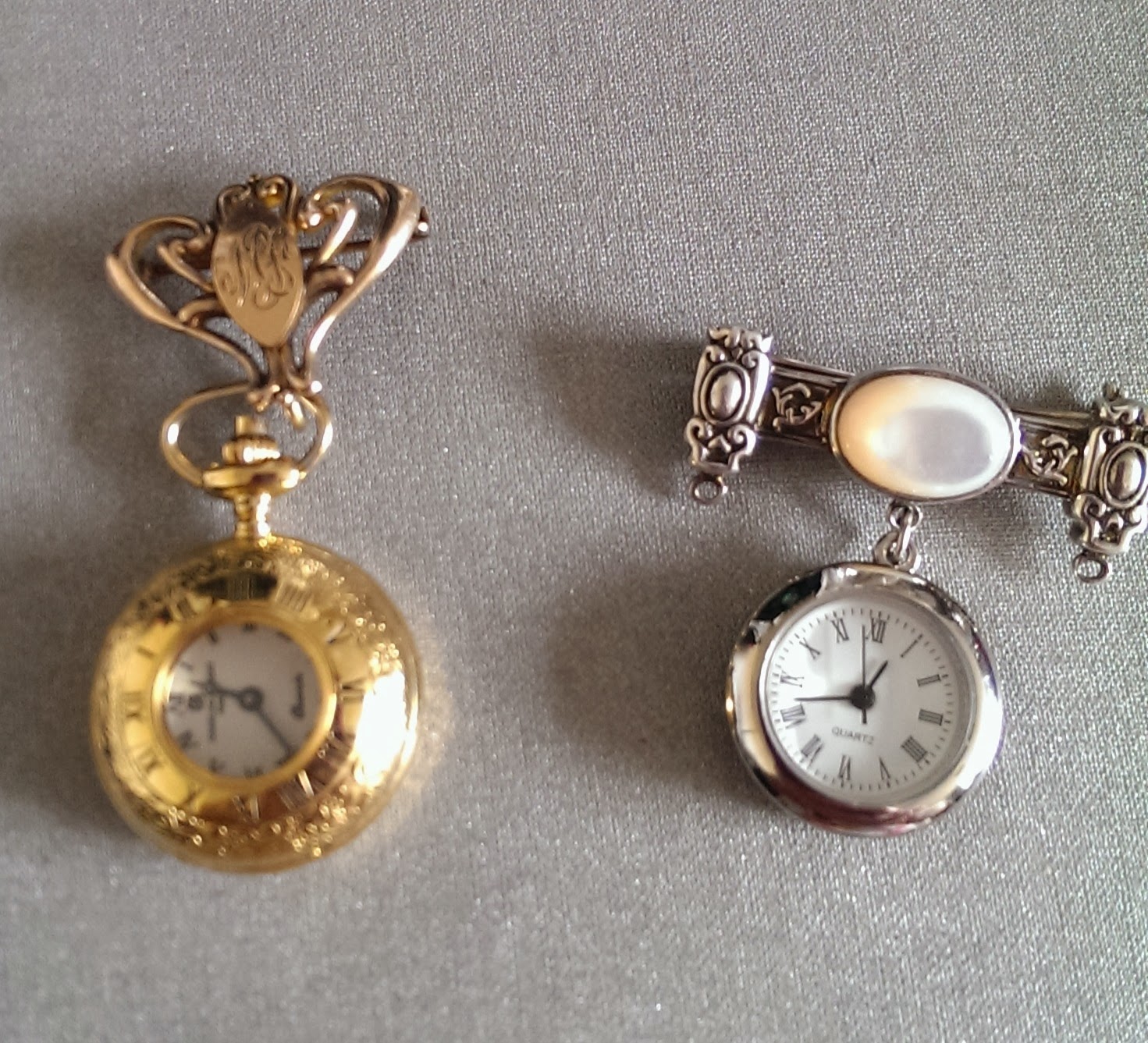 I was in the middle of recreating my 1850s Bloomer dress and while I was at a Costume Symposium back in Williamsburg, VA, I kept seeing portraits of ladies wearing long watch chains with their watches. Not all of them are chains. Some were beaded ribbons, or just strung beads. This was dated 1835. At this point I was on a mission to find a watch and chain for myself, and I really wanted to make a beaded one but my Bloomer dress was 1850s so I kept looking. 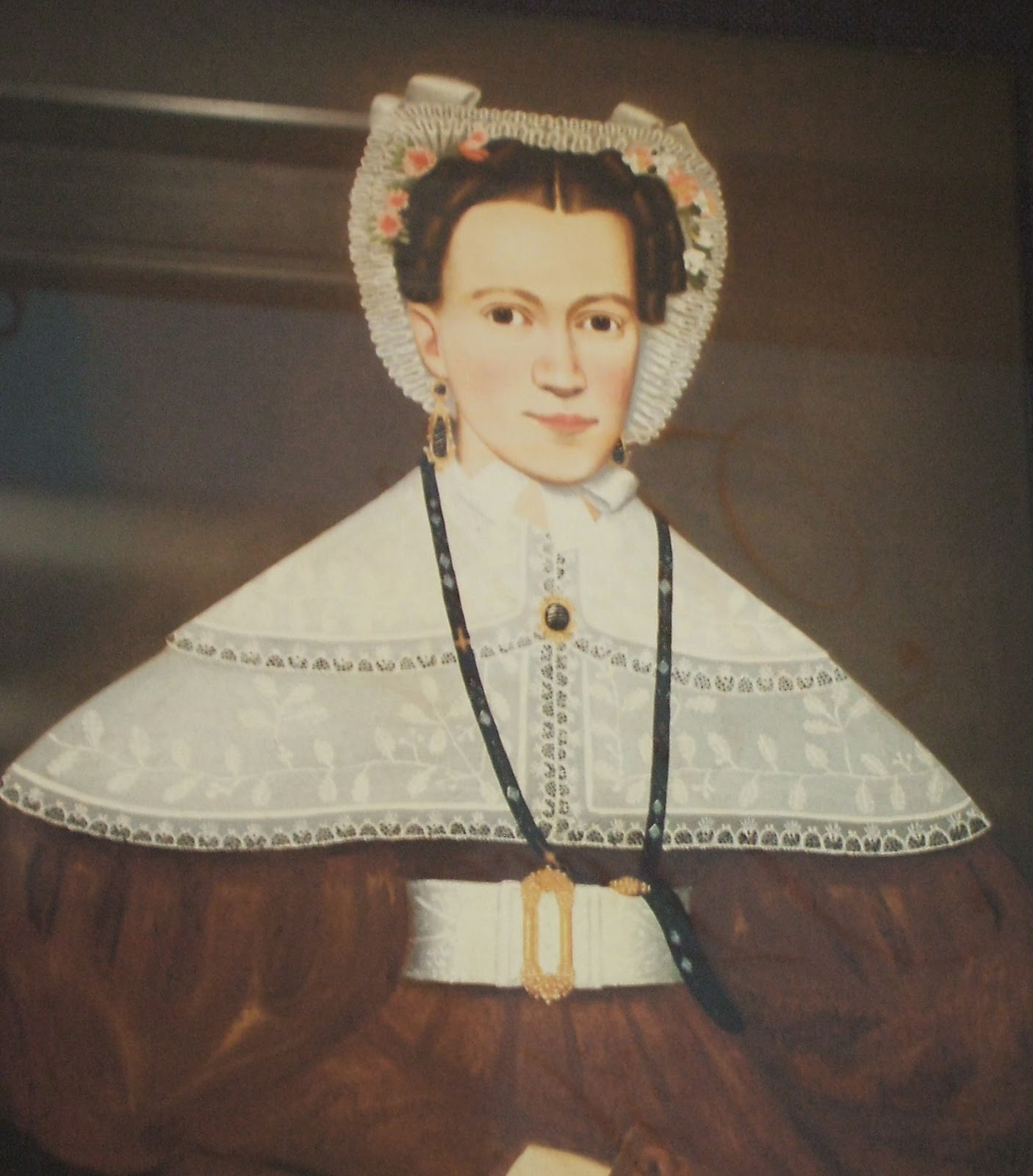 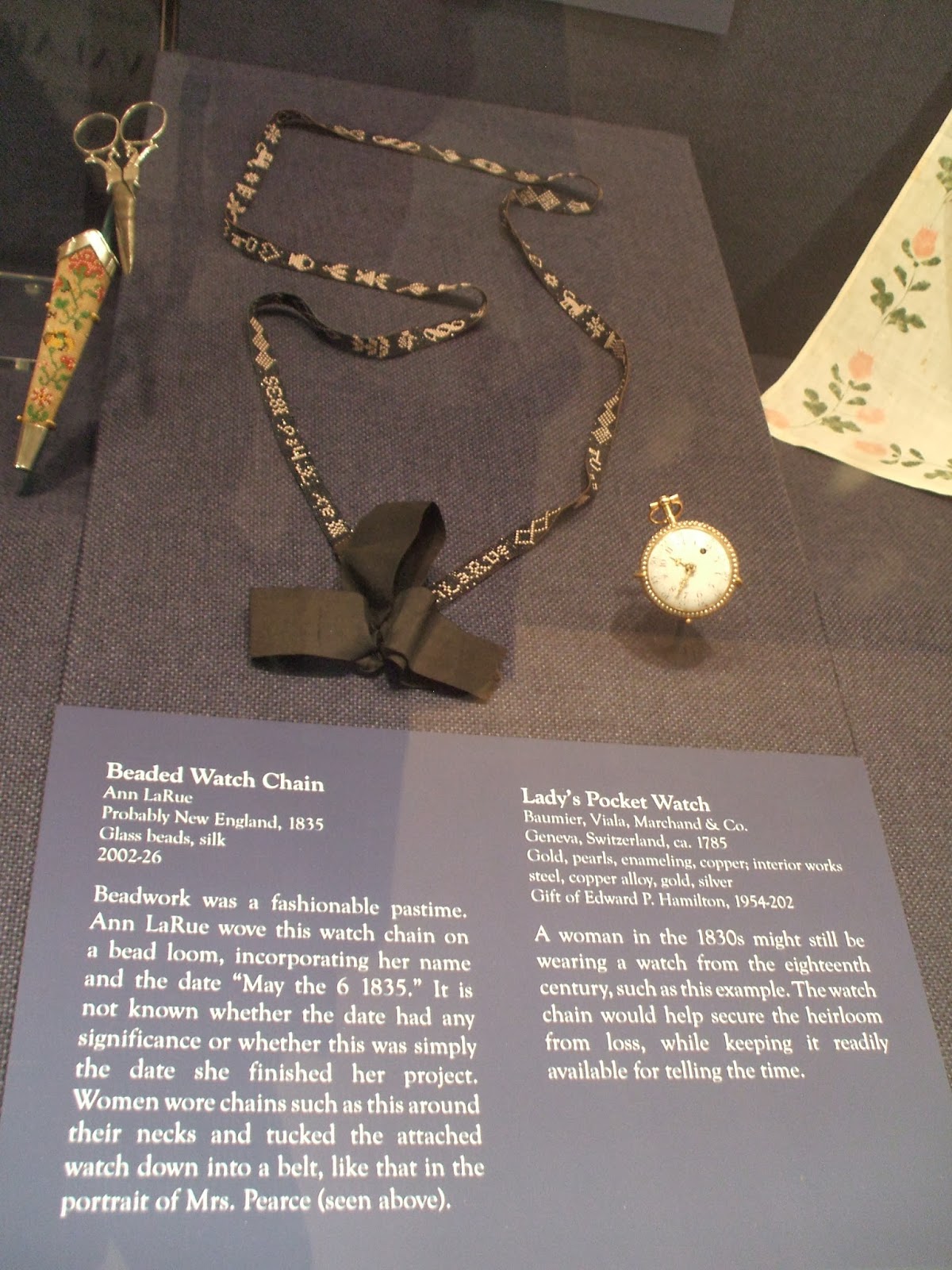 So that’s the background for this post. This morning while chatting with Gina W. I mentioned the long watch chains and how many photos I’d collected. She said I needed to do a blog. So Gina; here it is.
I collected all my photos together that shows watches. Most of them are actual photos and paintings of ladies wearing them since fashion plates and catalogs didn’t show them being worn.
The earliest I have photos of are 1830s. These are all about mid ‘30s. The chains are all long and tucked into a belt, although the first one of Rachael Jackson (President Jackson’s wife) is clipped at the collar and just hanging above her belt. It may well be a piece of jewelry too. 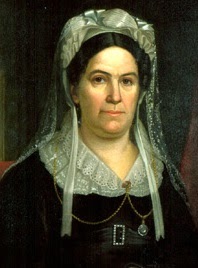 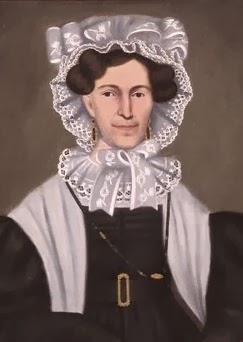 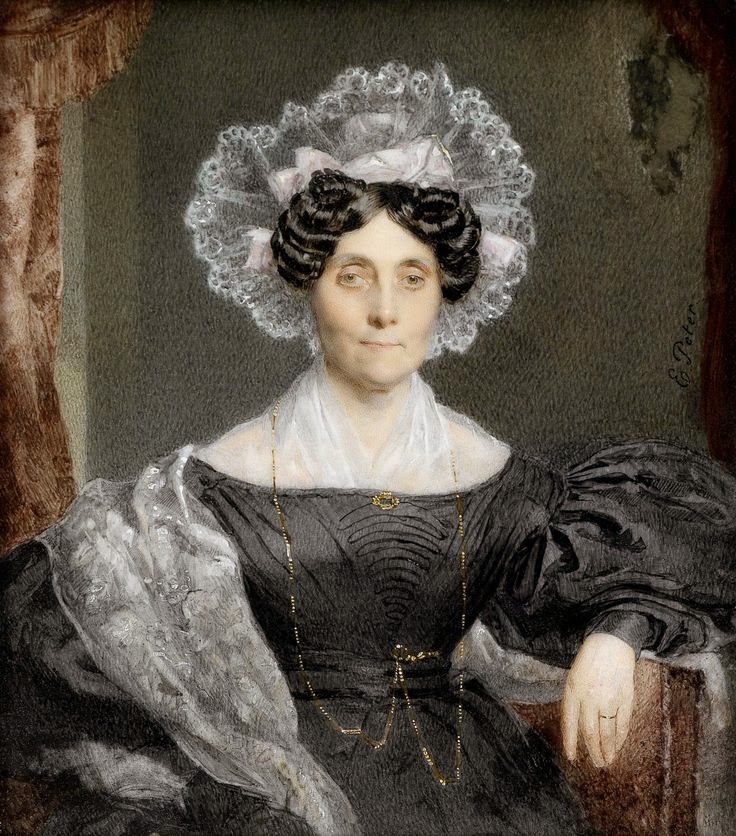 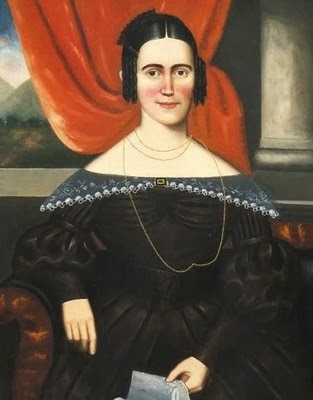 In the 1840s they seemed to just have the long chains. 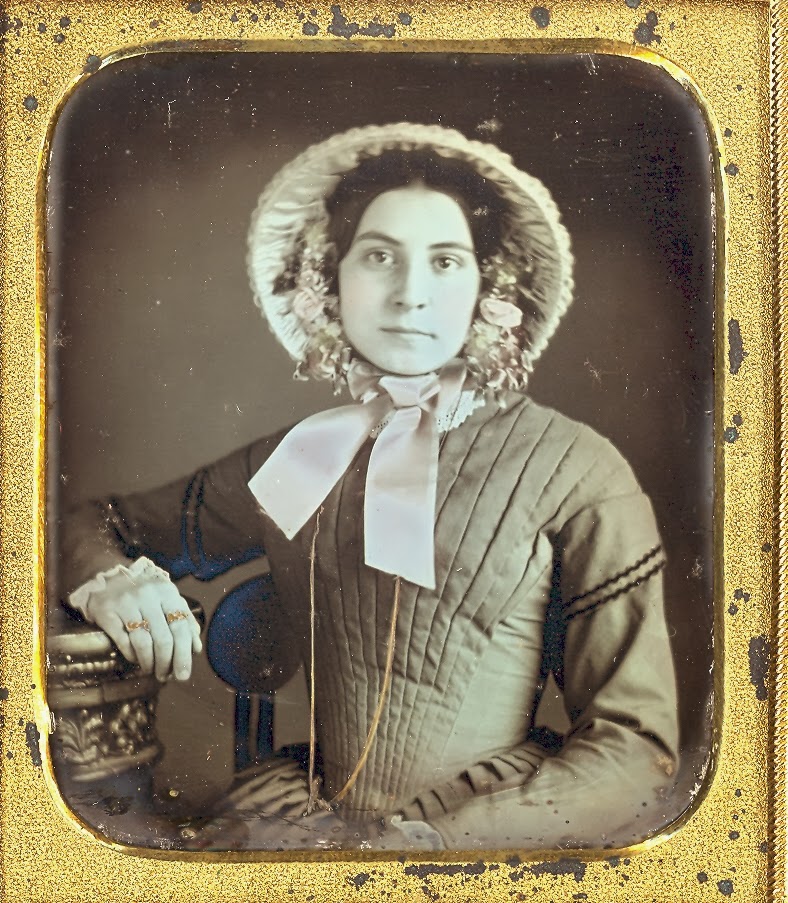 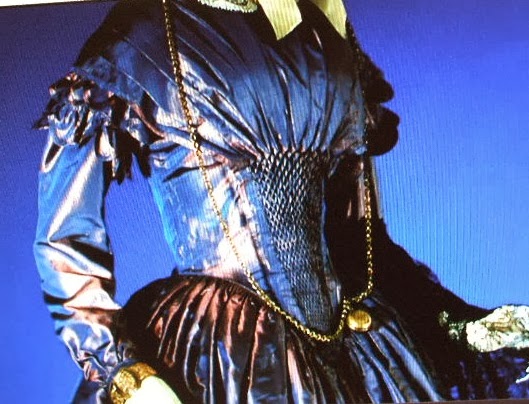 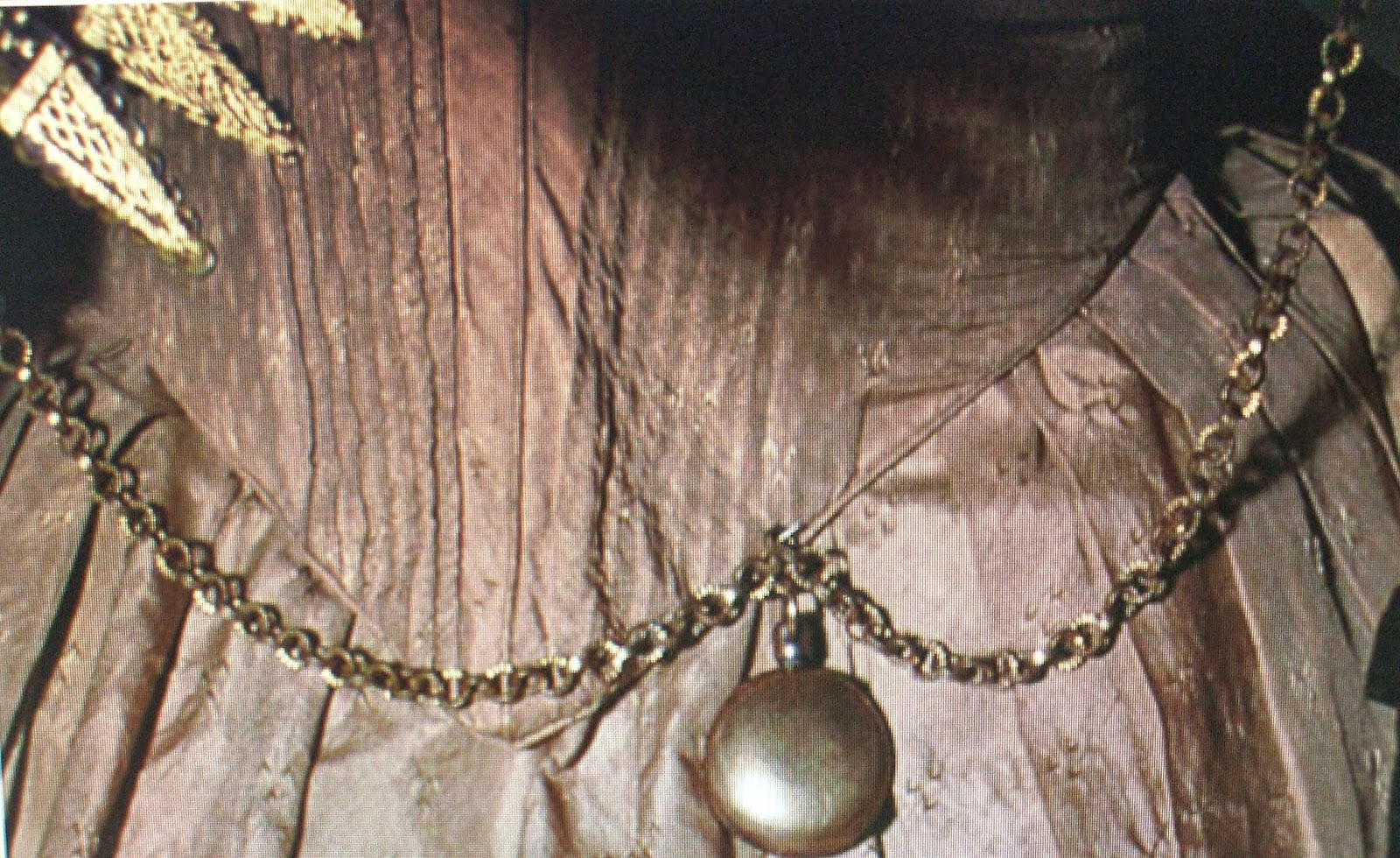 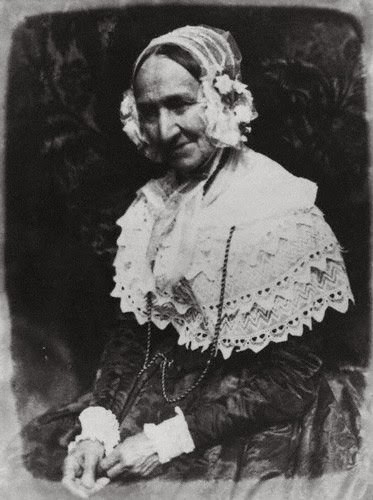 Then I started finding some 1850s examples. This photo came from my research on the Bloomer gown where the lady on the right is wearing the gown I copied before she had it altered to a Bloomer. All three of them have their watches attached to ribbons which are pinned to their lower bodice and tucked into a watch pocket at their waistline. Watch pockets are still a mystery to me. I haven’t successfully added one to any of my dresses yet. 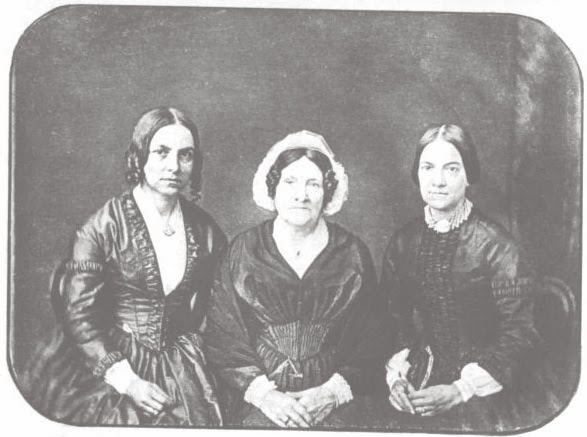 Both of these ladies have a long chain although the one on the right dated 1854, may have a very ornate pendant or watch on hers. 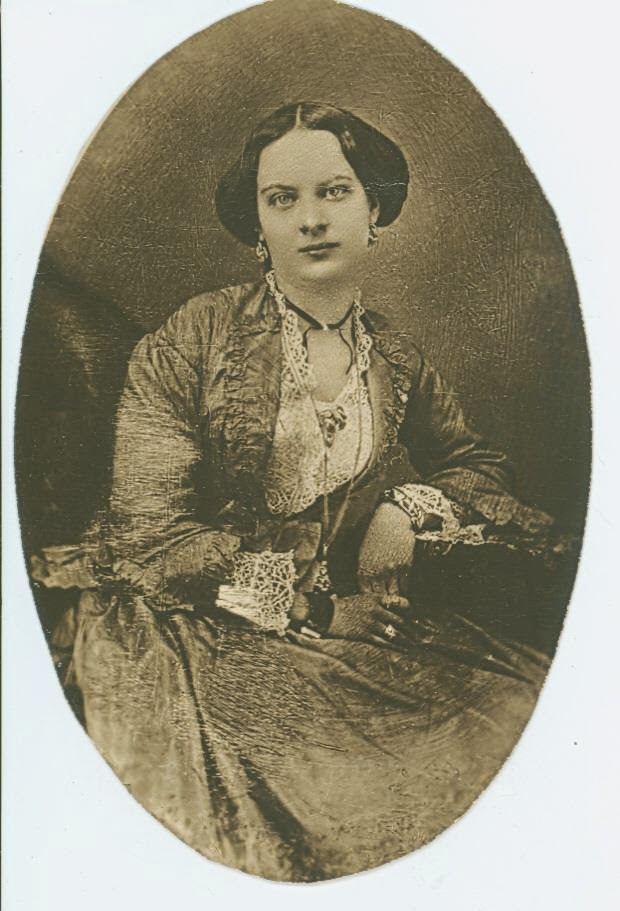 In the 1860s the watch chains and watches were shorter. A couple photos show them still tucked in the belt if they had one, and some now hanging on the outside where the watch showed. 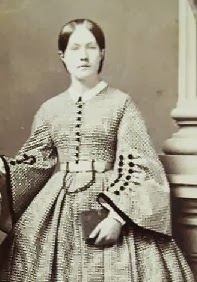 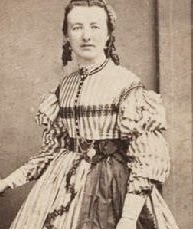 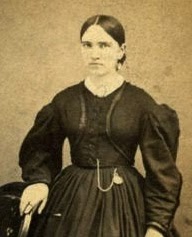 This one of Dr. Mary Walker, wearing her Bloomer gown in the 1860s, has a visible outside watch pocket on the waistline of her bodice. I think this watch chain looks similar to the gold one I have.

I couldn’t find any in the photos I found of the 1870s but they popped up again in the 1880s with their bustle gowns. They’re still showing long chains but more watch pockets are visible on the outside. 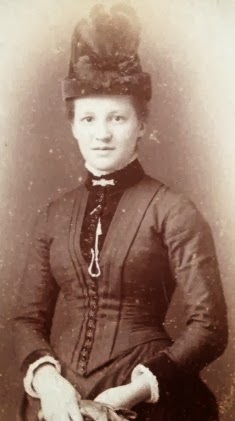 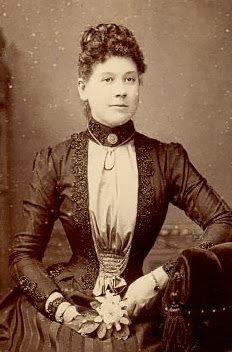 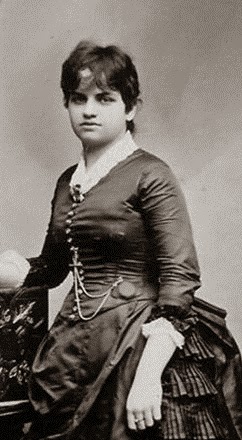 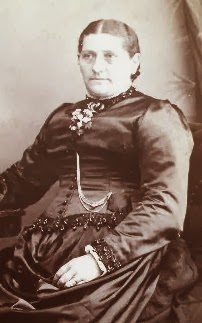 I found one photo in the 1890s with these two young ladies wearing long chains. Another I found looked like a watch but on closer inspection it was a lorgnette. I wonder if that’s what all those long chains eventually became? 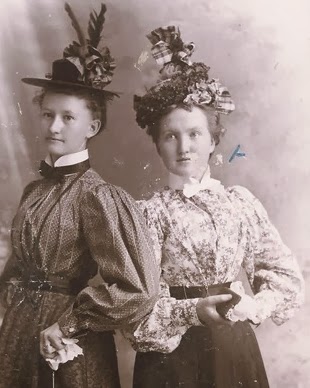 Since I’ve been working on a couple 1830s dresses, and my inspiration photo of one of them did have a watch on a long chain, I dug mine out and it’s the perfect accessory to go with my gowns. My chain is 55 inches long. I bought the working watch from a friend of mine and it’s the perfect size. 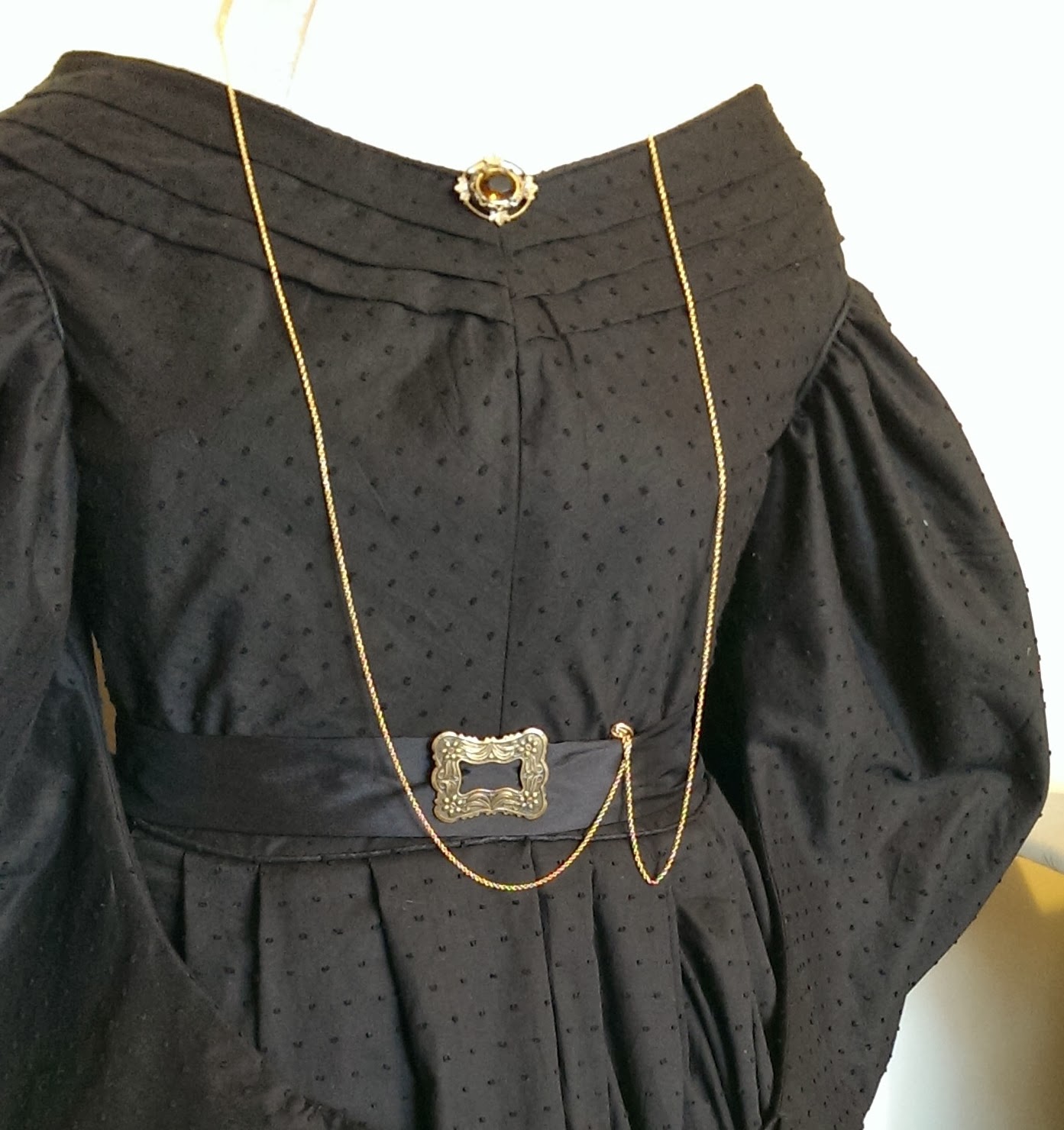 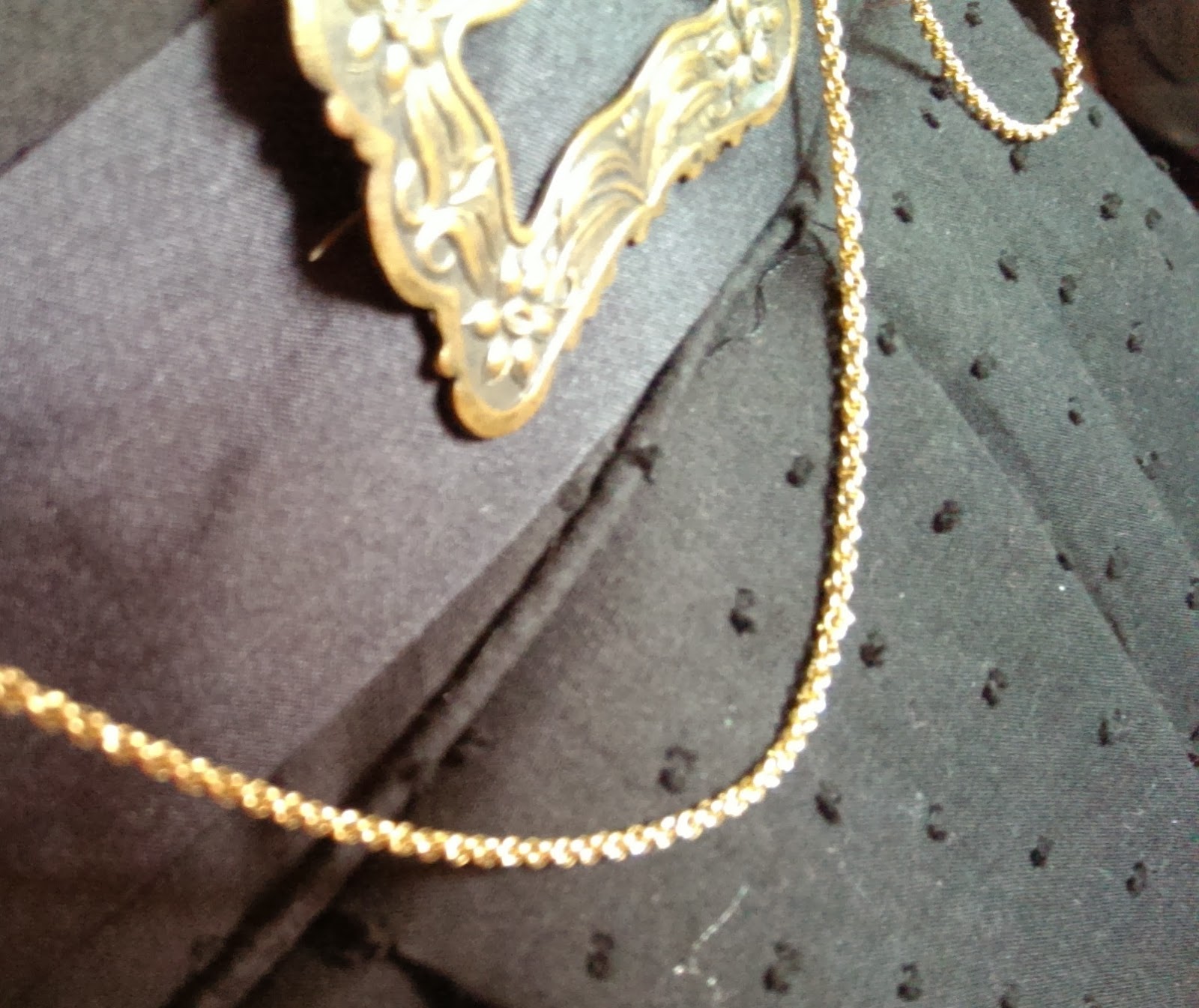 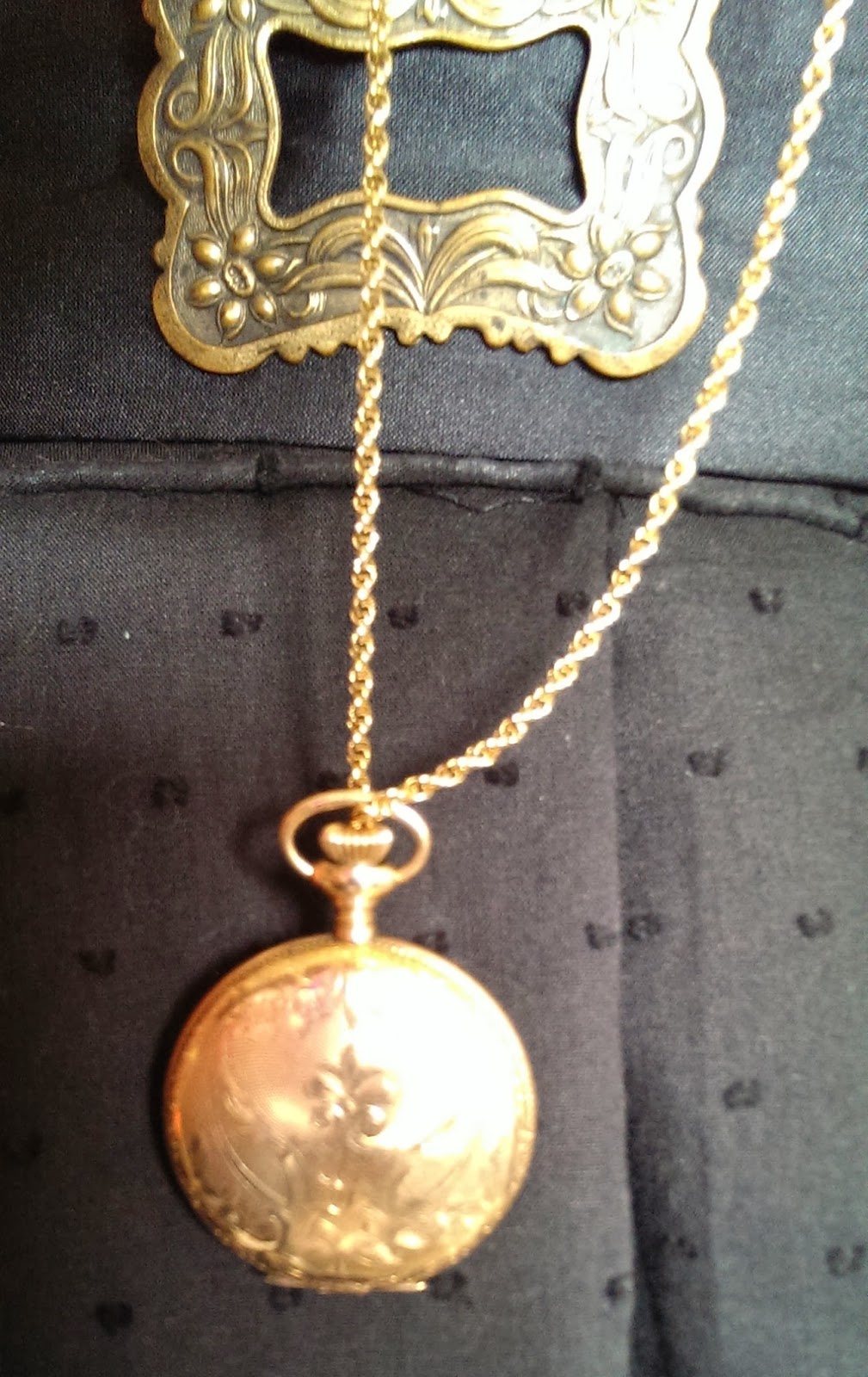 You know what? You can’t buy chains this long anymore. Guess where I got mine? On a cruise ship. In one of their kiosks they sell a variety of chains by the inch. You tell them the length you want, pay for it, and later pick it up with the connectors attached to them. I picked a rope chain and think I paid $24-$27 for mine, so that’s about 4 cents an inch. Its 14k electroplated gold, and not a bright shiny gold that looks cheap.
I know I’ve seen them in other places than a cruise ship but never paid much attention to them. So if you know anyone going on a cruise, or come across one of those vendors somewhere, check it out.
***********************
ETA: For those of you interested in the 1830s-50s beaded watch chains, read more about them here: http://aylwen.blogspot.com/2011/03/making-1830s-beaded-watch-chain.html
Aylwen was at the same symposium that I was and took this class while I was in another.
To purchase the Piecework magazine online with the article on them, go here: http://www.interweavestore.com/piecework-may-june-2000-digital-edition
And if you want to make the bead loom for making one, here's some instructions: http://www.museum.state.il.us/ismdepts/anthro/beads/pdfs/Loombeadinglesson.pdf
Posted by Time Traveling in Costume at 2:19 PM