Reports of the CoCo Tornado Hitting So. California!

*A tongue-in-cheek post as the countdown begins to Costume College*
Around this time of year, about a month before Costume College begins in Woodland Hills, tornados begin showing up in sewing rooms and spaces all over Southern California and spread to the rest of the state and eventually to the entire US! Reports are even coming in from other countries!
The scattering of fabrics and patterns, pins on the floor, and the violence and stress it causes is so overwhelming that it causes many tears and throwing of things, and yes, even rants and disputes in the affected households. Cats normally complacent, observing and helping the sewers suddenly run and hide in fear. Stalwart dogs even learn to stay at bay.
Reports have come in of multiple rooms being struck, and off-shoots disrupting other plans and projects are also occurring.


The aftermath isn’t pretty and may take weeks or months, some say years or never, to clean up and recover. This is what my sewing room looked like while four projects, along with hats, were in progress. I can’t tell where one project begins, and another one ends. 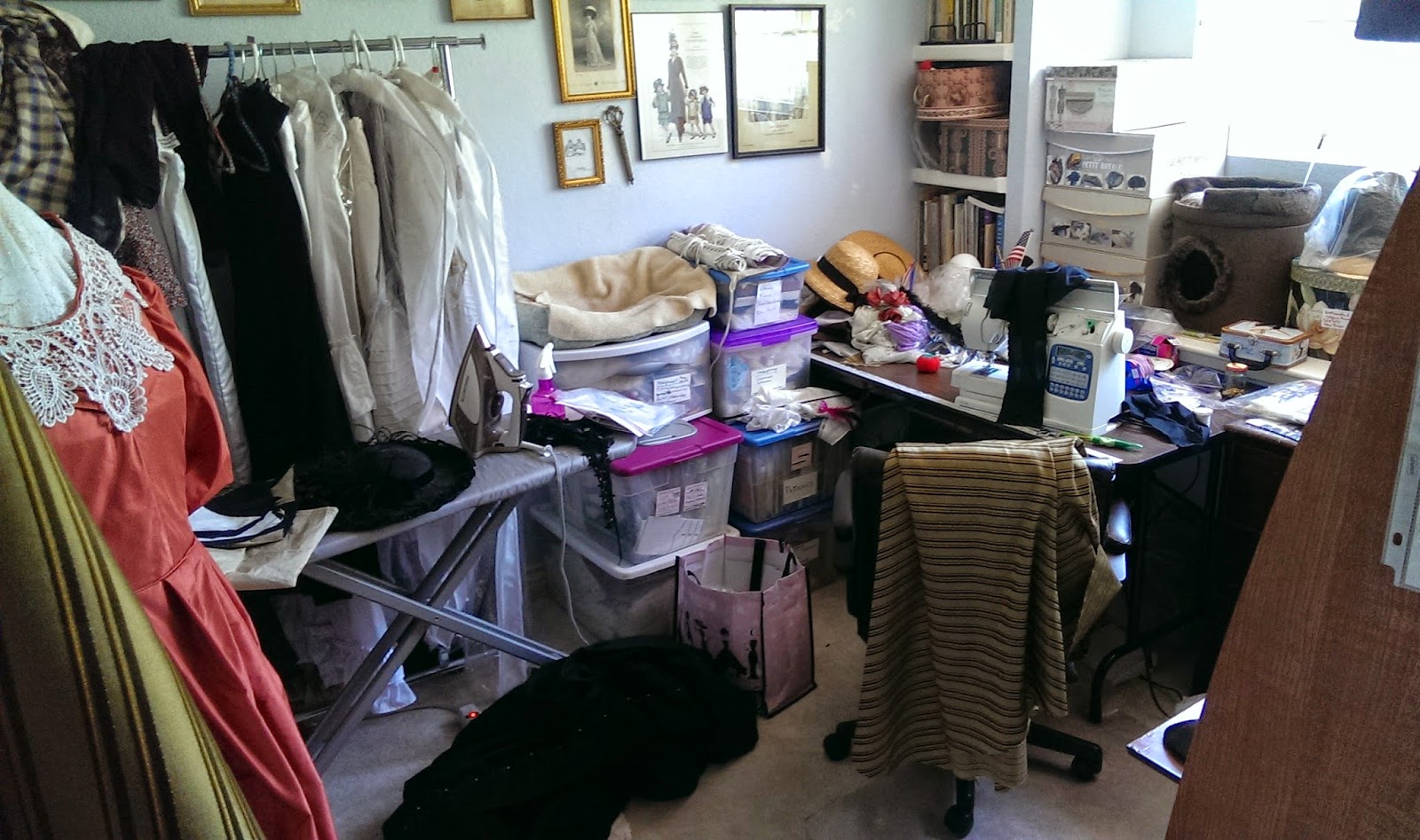 Friends have been sending in photos captured at the moment of massive upheavals in their working areas. Jennifer wasn’t hit quite as bad as others closer to the coast are reporting. But she said it’s going to get worse over the weekend. 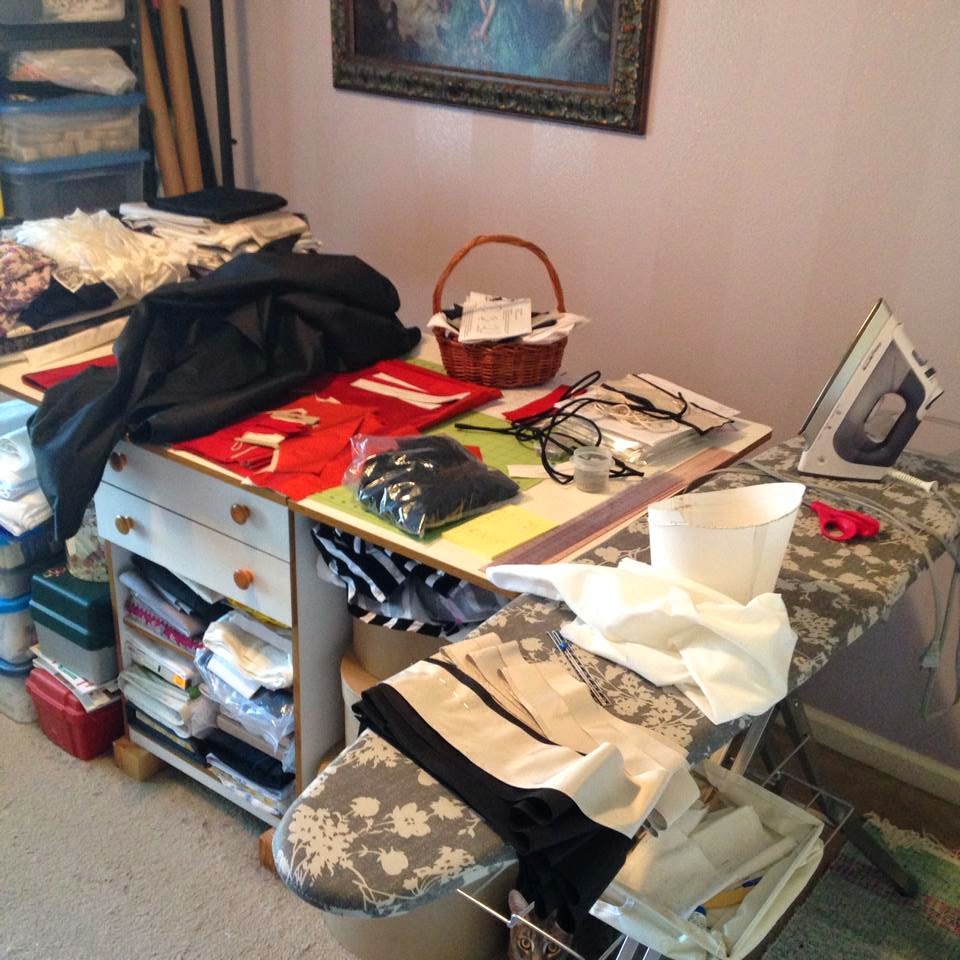 Tonya said she cleaned up a bit already. But if we know her, that won’t last long. 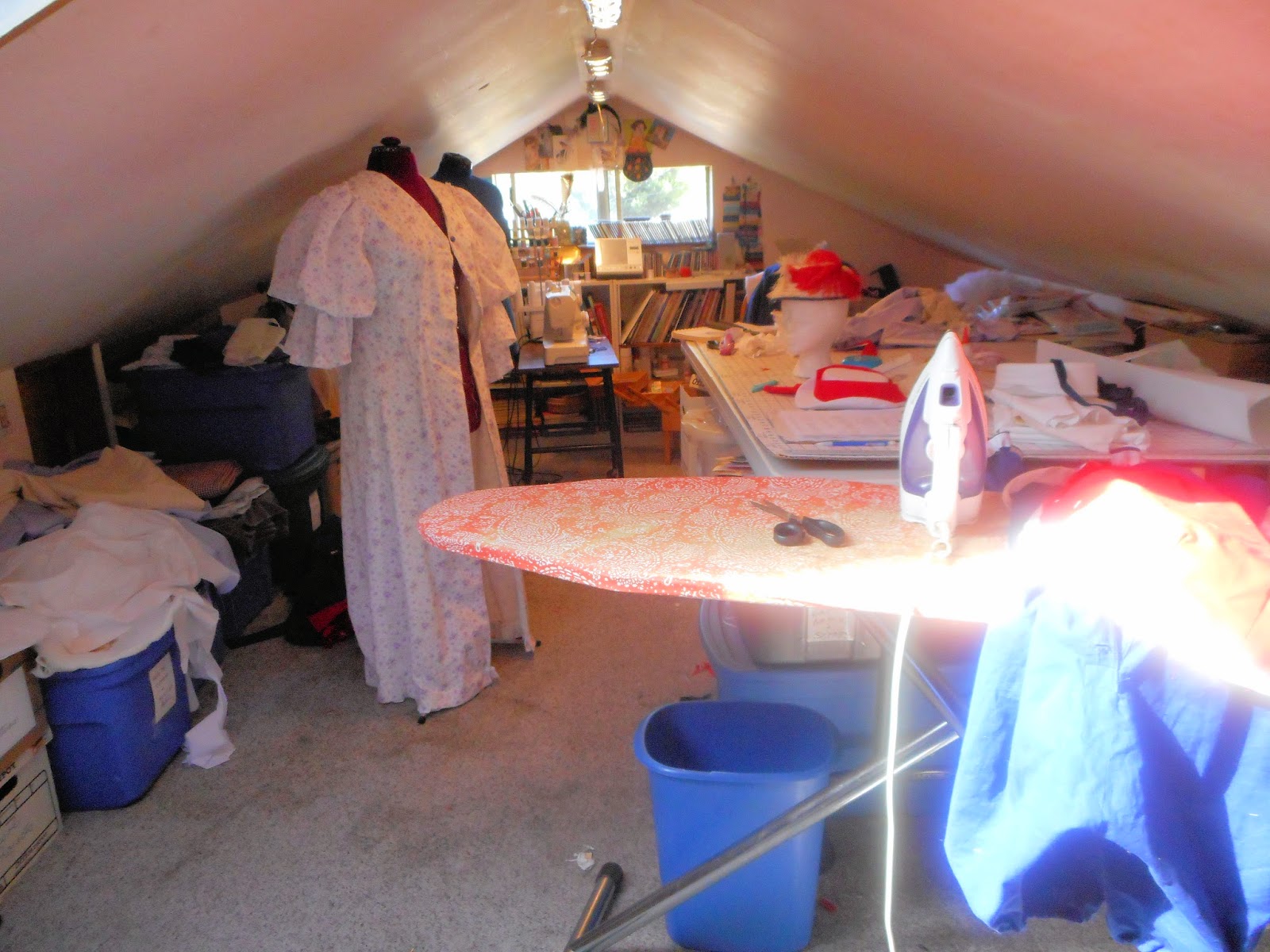 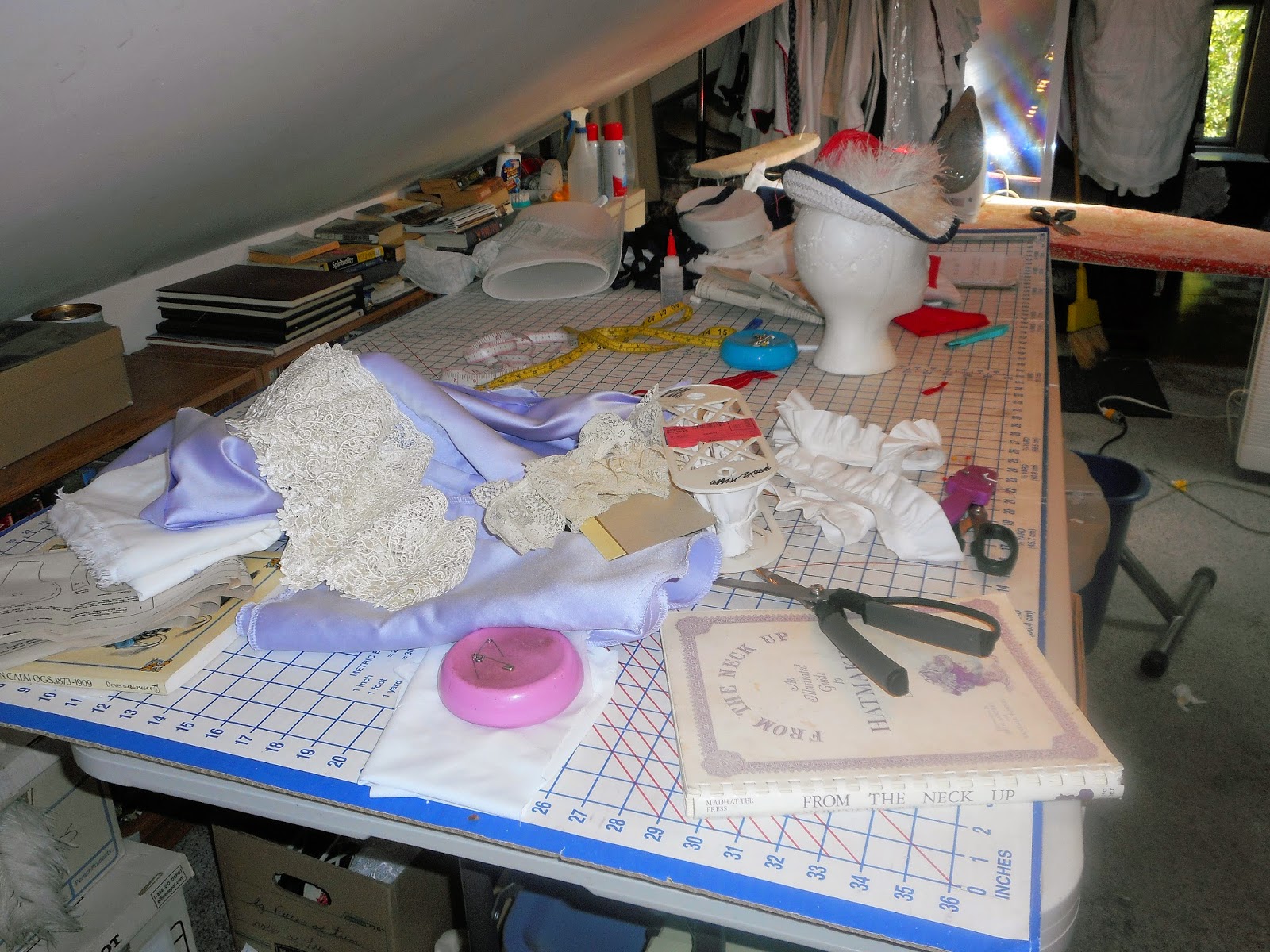 Cindy was able to make a small path to check out her damage. She found things buried among debris and is wasting no time getting back into her routine. 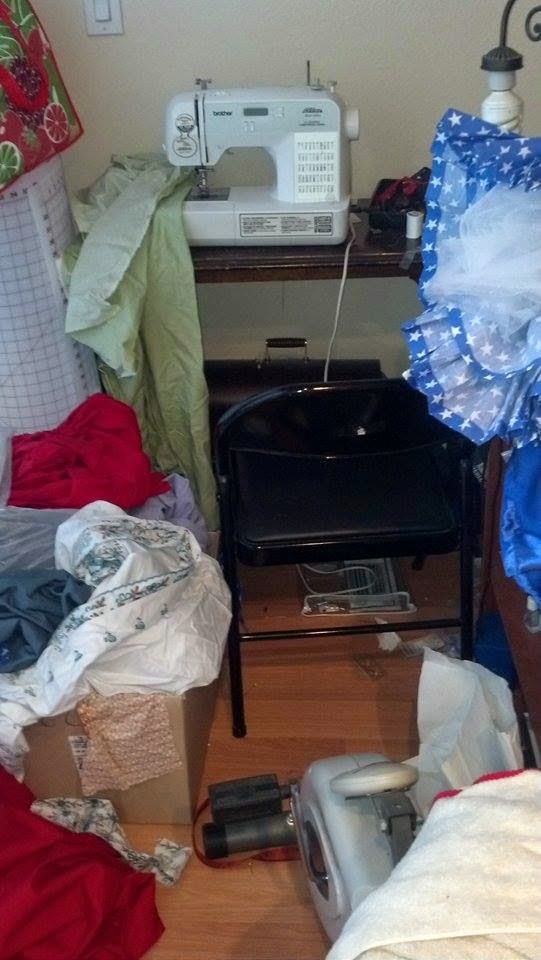 Sarah reports some confusion as everything was pushed into one corner. But she’s making progress once again. 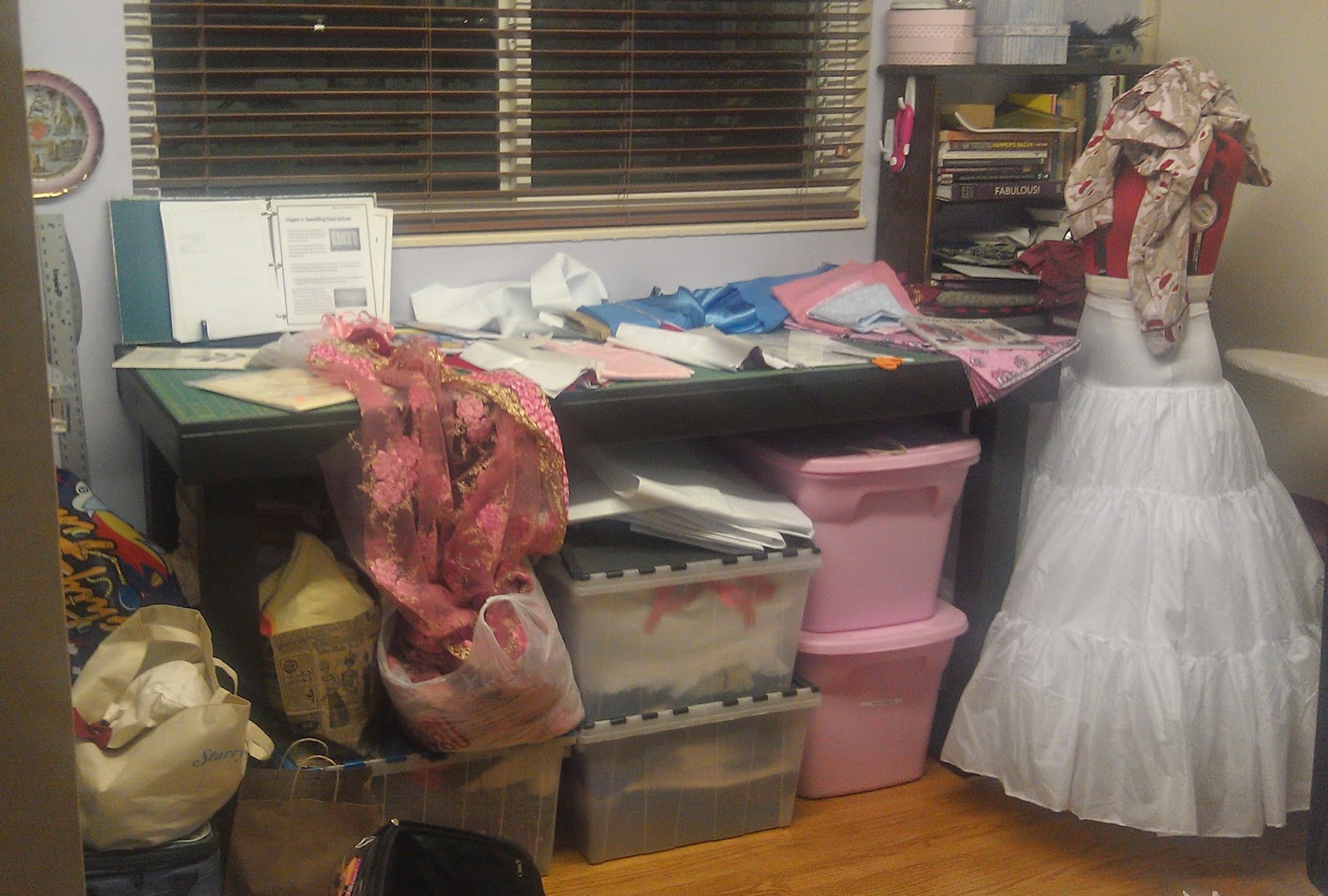 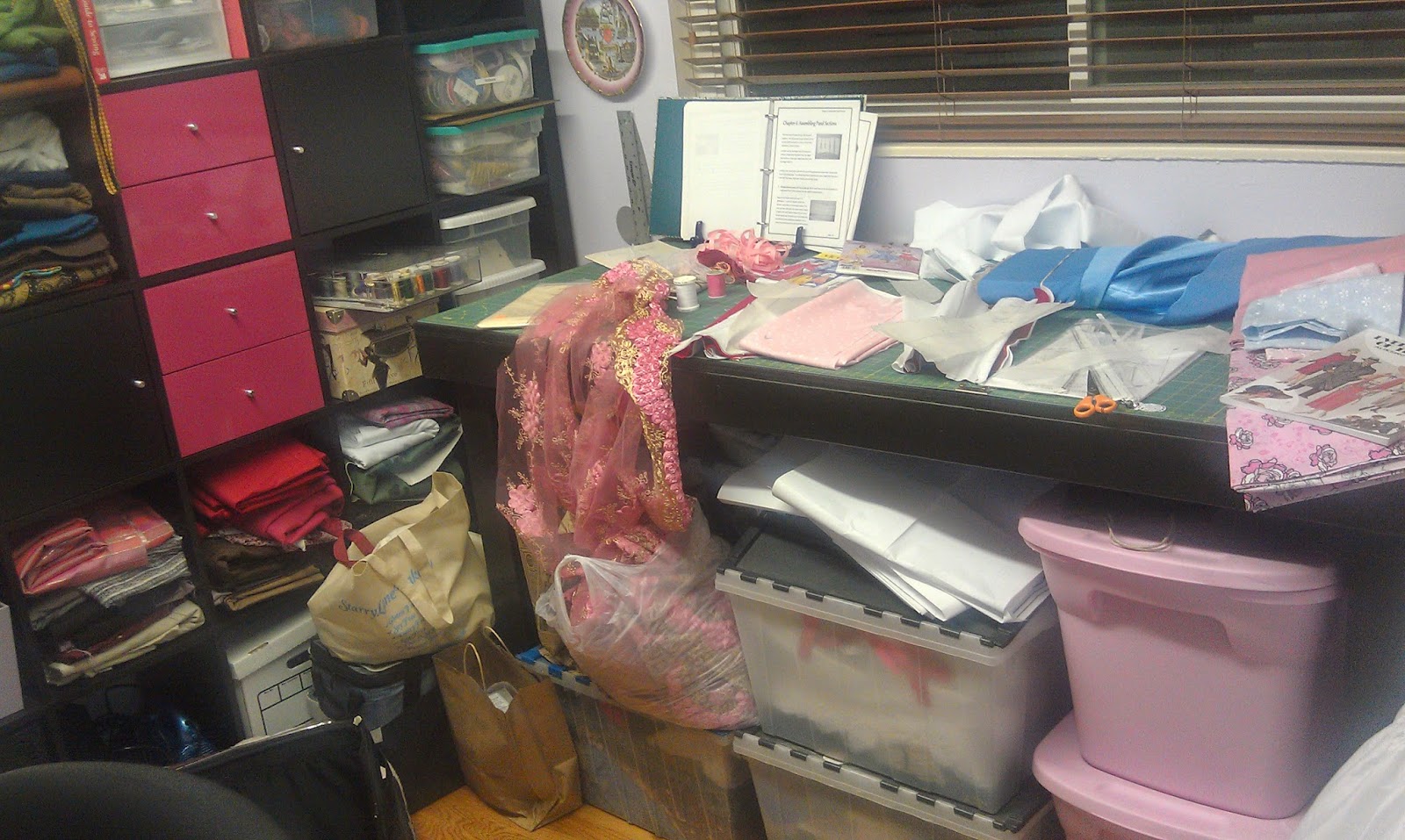 Hearing from Joyce, everything was shoved into the kitchen.   It seems to be a good place to continue sewing and maybe get dinner done at the same time. 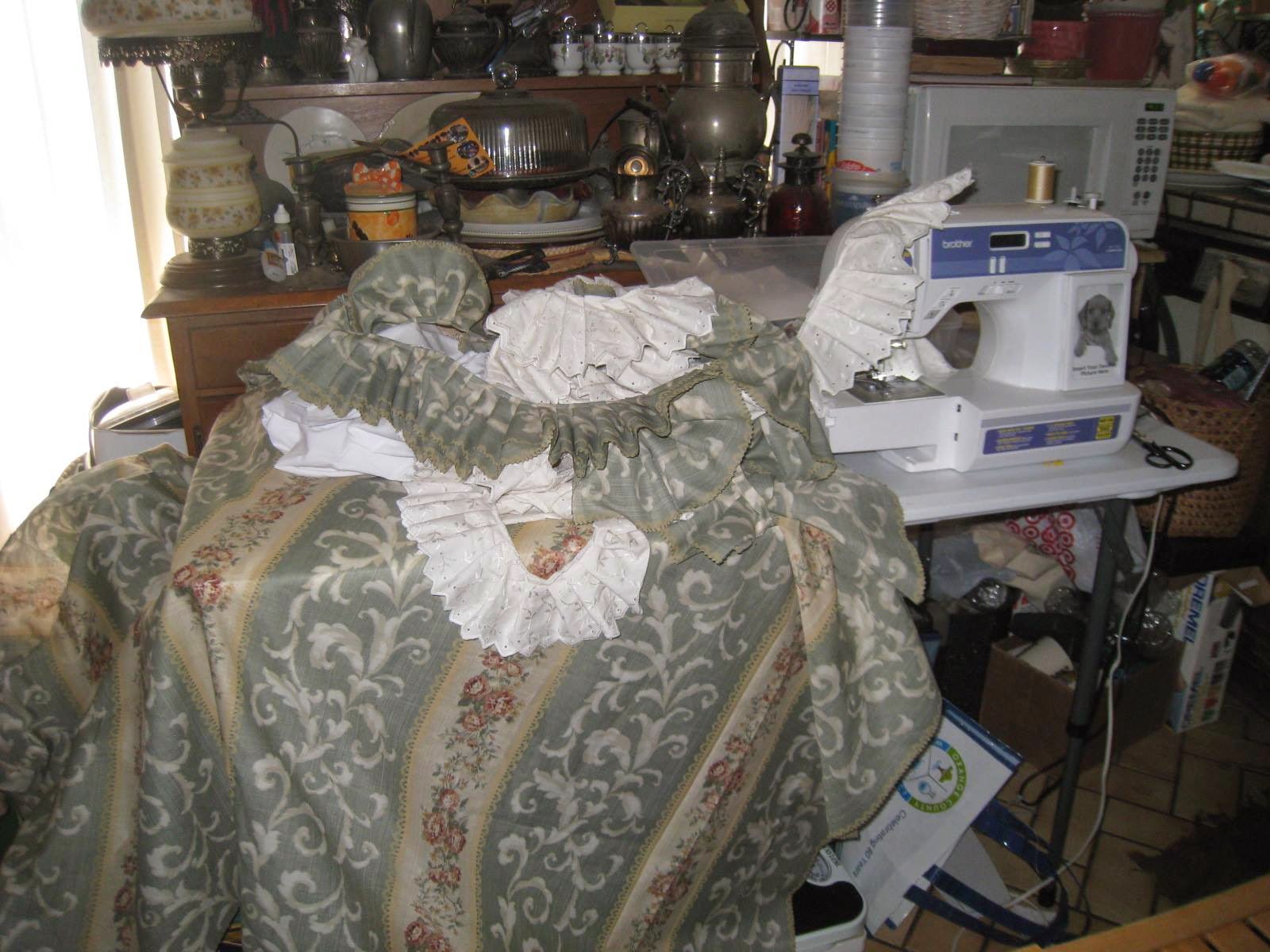 Finally heard from Birda, as she had to dig herself out from under the piles! Apparently things scattered all around her house. 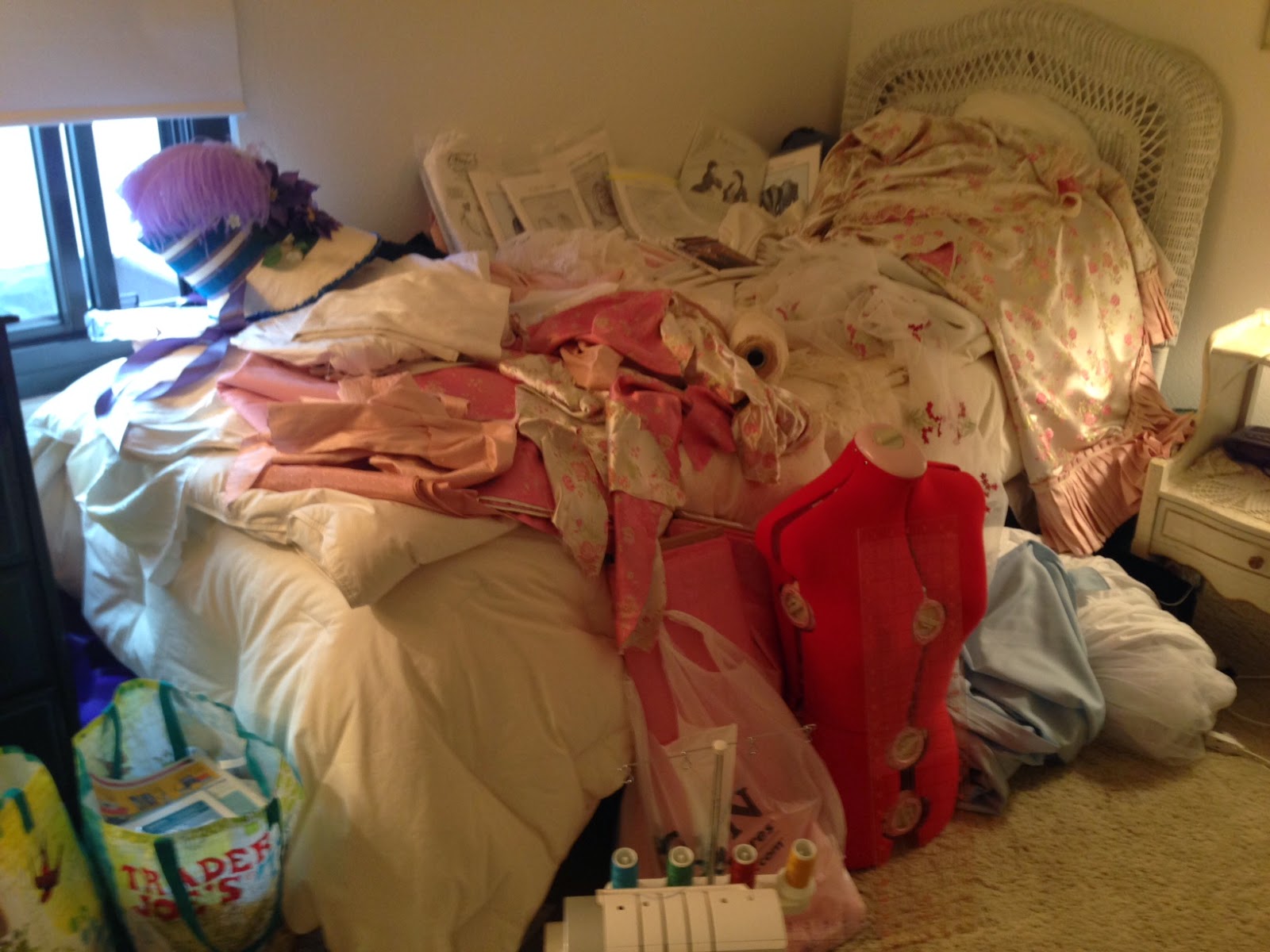 Latest reports are: it’s going to get worse! As the date gets closer, no one will be getting any sleep and only noises will be heard from dark corners underneath all the fabrics. Families will have to fend for themselves for meals.  *You know who you are!*
____________
**According to recent updates, it has gotten worse. Today more photos were sent in showing further disaster zones.
Sally said she's been working up a storm, so she hadn't even noticed anything different until she saw this report. 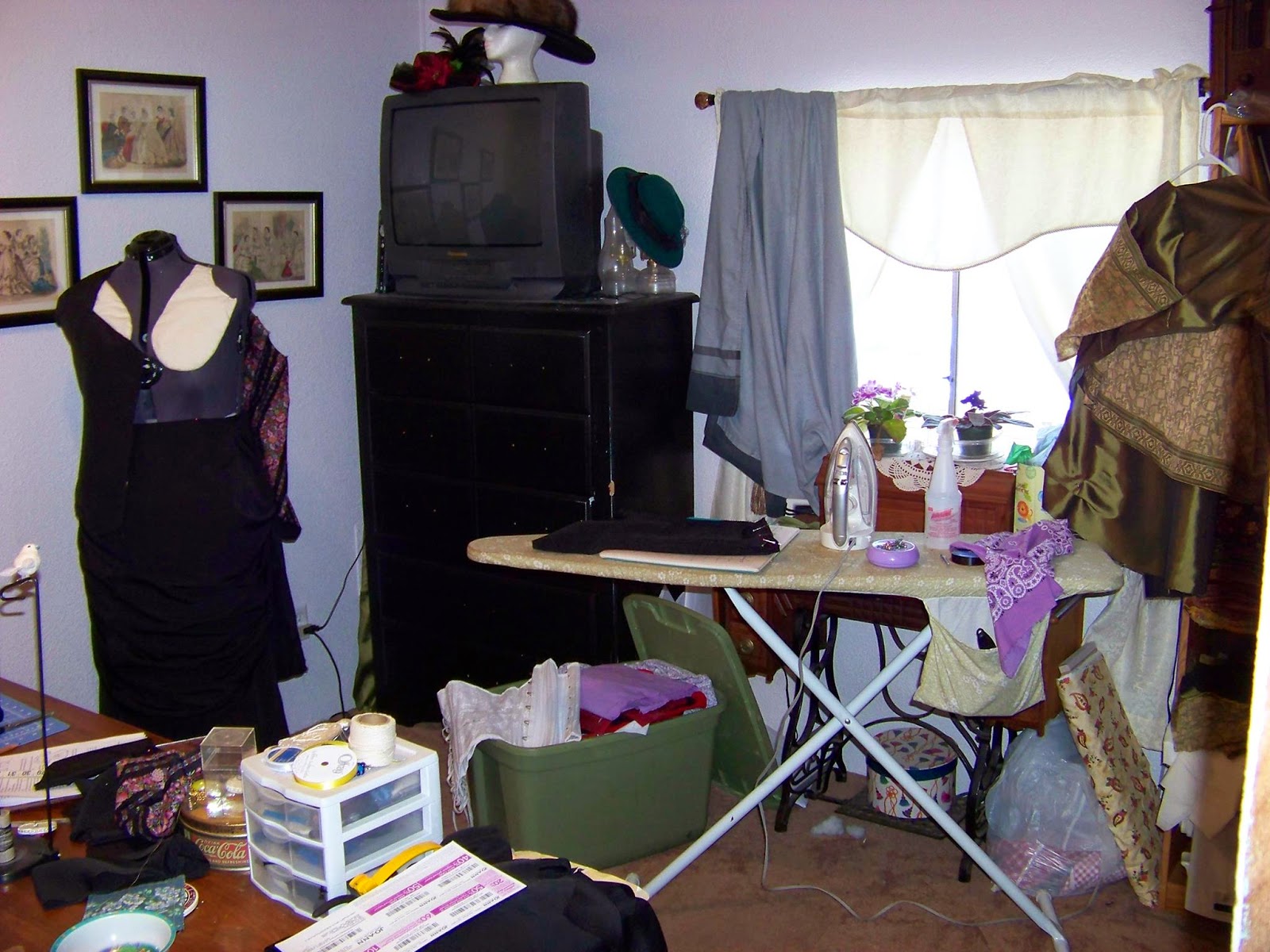 Janet  left for a few hours and on her return wasn't able to find the dress she had been working on. I don't even see her sewing machine in there. 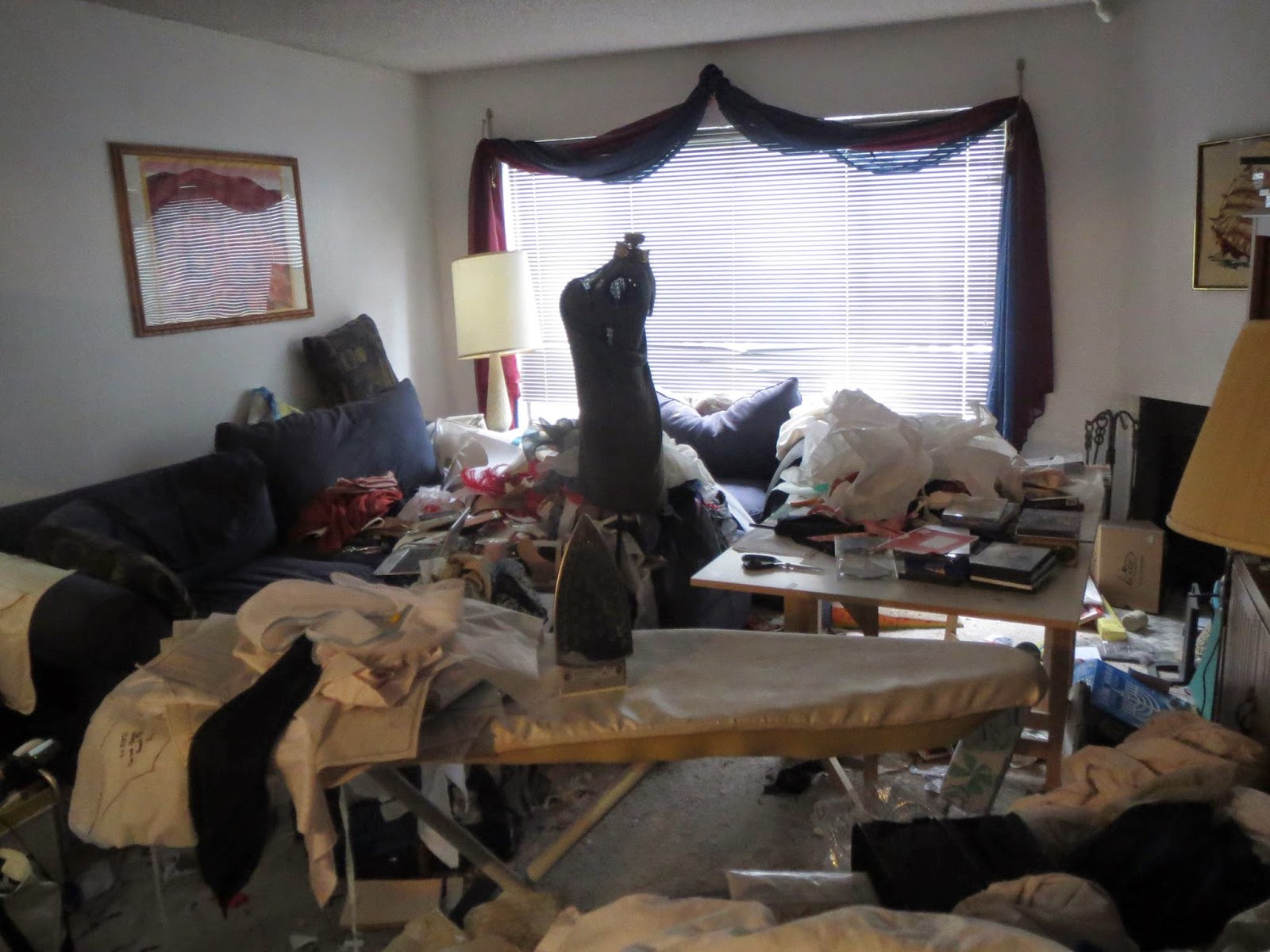 But then suddenly, out of the confusion and darkness, comes beauty! At Costume College you will see all the lovely things that were made during this stressful time of year and you may never have believed that this is where it came from. But I wanted to share with everyone what the creative process looks like, and that you too are not alone in this mass confusion the two months before CoCo.
And I have to share a quote from my hubby when I was so deep in misery looking at all my piles and messes about my room. “Yes, that’s the way you work. But in the end you’ll make something beautiful.”
~~~~~~~~~~~~~~~~~~~~~~~~~~~~~~
I want to thank those that have continued sending prayers and good wishes to my Sewing Kitty, Chloe. These photos are from three days ago. This is all part of the massive viral infection she had. She continues to improve although had some scary setbacks this week that scared her mommy but when your cat yells at you loudly for breakfast, I consider that a good sign of recovery. A couple days later her eyes are completely clear and she has started to take tentative steps herself outside. 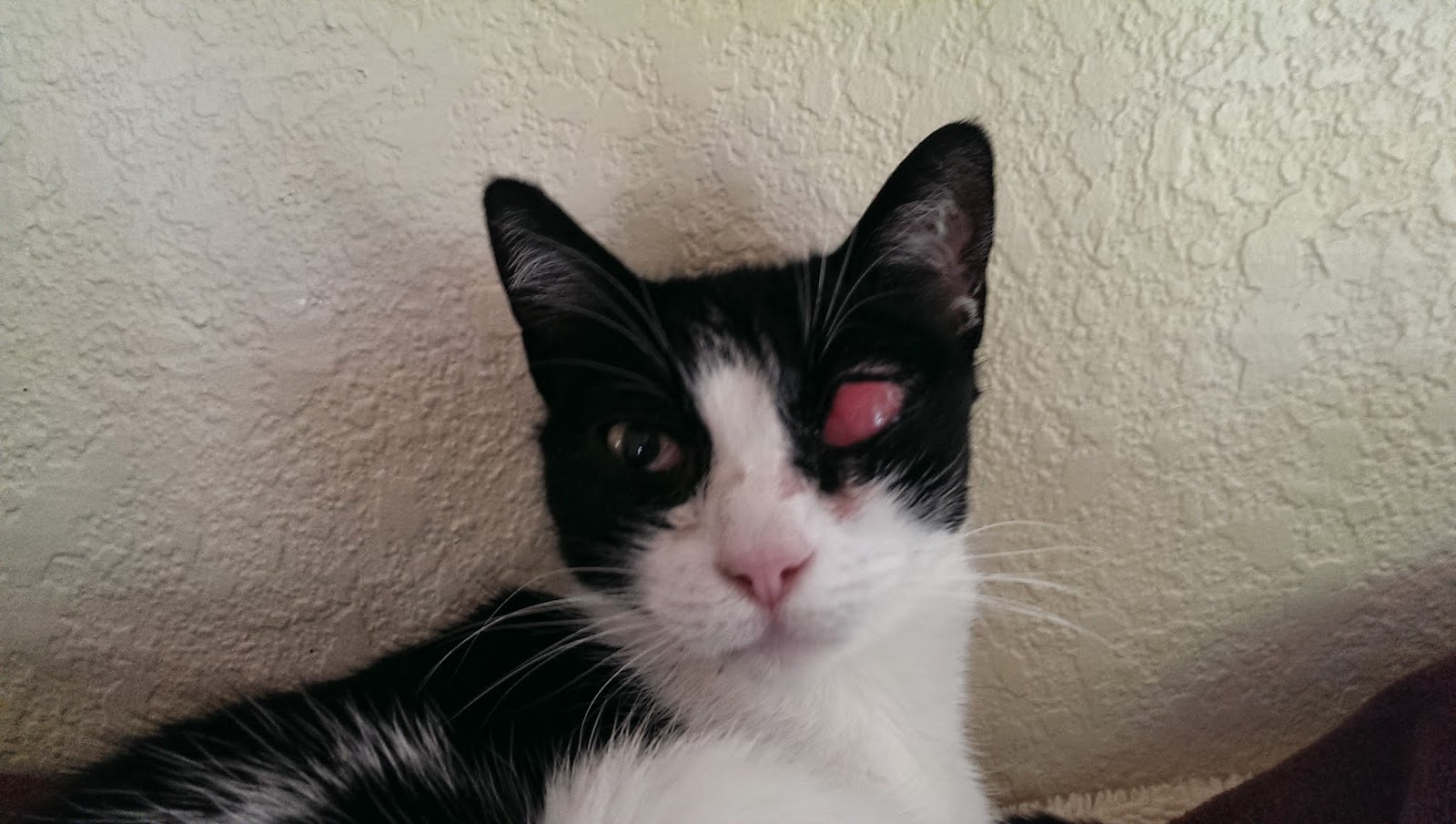 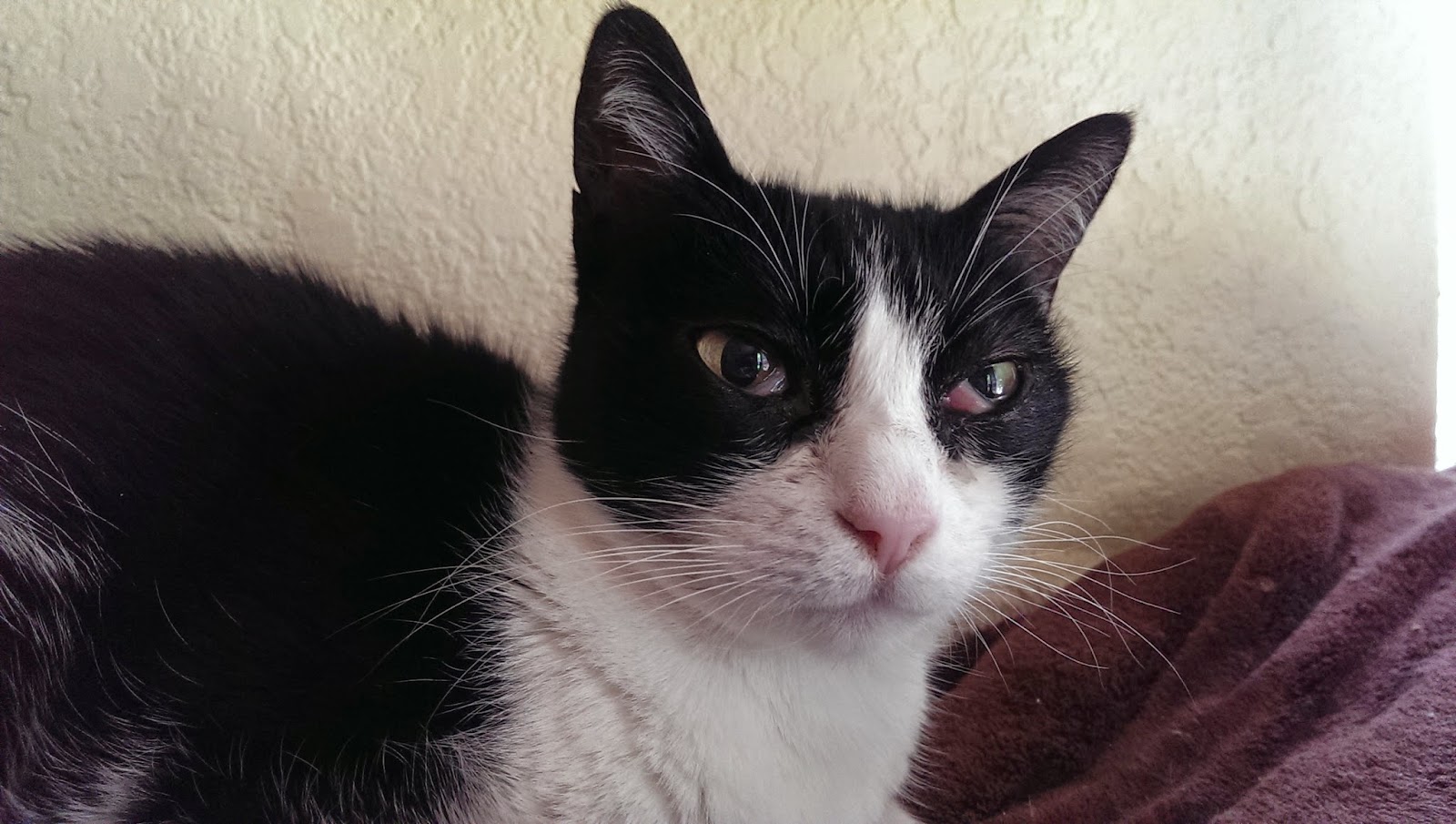 Posted by Time Traveling in Costume at 7:18 PM