Last Friday I drove up to Nuevo, CA, to one of Shelley Peters’ workshops from the Kansas Mercantile. I wanted to make a couple pairs of combination underwear both in late 1800s style and some ‘teens styles, and with something as complicated as this, I wanted to have Shelley there to help if I got stuck. Guaranteed I’ll get stuck trying a new pattern. Shelley regularly puts on these workshops at different locations wherever someone wants to host one in their home or a meeting room. I heard her say she’s traveled to Nevada, Arizona, and Washington to do one of her corset workshops. She told us a local newspaper from Riverside, Press Enterprise  http://www.pe.com/ was coming to interview her during the workshop on Friday for a human interest story for the newspaper and she wanted her students to help her put on a “show”. So we brought our dress forms with dresses we had made in her classes, or underpinnings if we wanted to show those. Because it was on a Friday the number of students were small but we certainly made up for it. 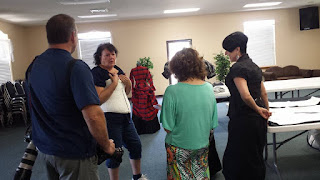 Cindy S. had brought two dresses to display; a navy blue 1850s dress, and an 1870s red plaid polonaise over black skirt. *I have to admit that Cindy’s plaid has inspired me to repurpose a green & black plaid bustle dress I made into one of these now. I wasn’t happy with my bustle due to the weight of the fabric pulling it down, but a polonaise would work. So thank you Cindy!*    Jennifer K. who recently became interested in historical dress brought her black and grey ball dress that she put together from thrift store finds. Of course it set her off to create more now.  Amanda M. was also new to costuming and she came to make her first corset and had a wrapper she had been working on so we had a lot of good conversations over both our experiences with them. I brought my 1830s jewel toned plaid dress I had started in a workshop last year. I also brought a couple pairs of antique split drawers, partly for myself to have a visual while I was sewing my combinations, and also for showing to the reporter if needed. And we did. 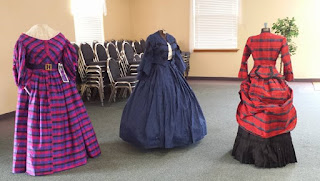 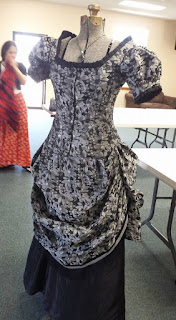 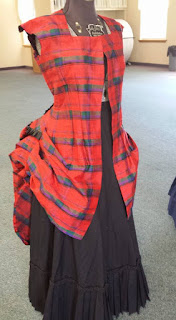 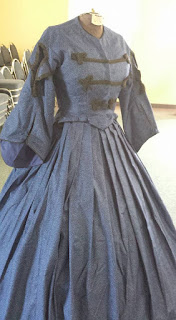 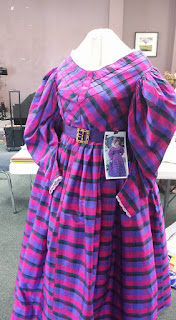 After the reporter, Laurie Lucas, had about an hour’s worth of history on Shelley herself, which was fun to hear about her beginnings, and then more than she could have imagined about history and women’s clothing, she and her photographer walked around talking to us and photographing what we were working on. They asked us to tell about ourselves too, and then about the dresses we had on display. She became really fascinated with the dresses, and we showed her the split drawers, how they worked, and our corsets. At this point the photographer was done and left, so we started loosening up our corset laces, so to speak. Laurie got to hear about our personal experiences wearing corsets and how we try to dispel the fake stories about them. Shelley finally said I’m putting a corset on you! If you’ve ever been laced in by Shelley then you know the hilarity that came into this. Laurie was at first shocked and then amazed, and was laughing as she felt this “big hug” from the corset around her. Once she got to see what she looked like in it, and took it for a “spin” walking around and sitting down, she got it. 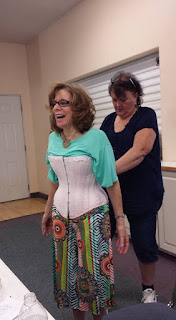 Laurie stayed a couple hours and had lunch with us before she left. I heard the article is supposed to come out on Thursday August 27, and is both a hard copy paper and an online newspaper, so you can see it on their website that I left the link for above.
Article in Enterprise Press

****************************
My good intentions of having two of my combination patterns all cut out in time for this workshop and sew on my assembly line fell through during the week before. So all I had to sew was one pair of the Truly Victorian ones that I had cut out. I decided I would try one first and see if it fit, since we had some fitting issues with it earlier, then go on to the others. The first time I tried a pair of these on, it wasn’t long enough for the split drawers to be comfortable and enough fabric to open easily. I’m high-waisted so I added an inch at the waist to make the bottom half longer. And the legs were too tight at my knees. So if you make them and you have knock-knees or large thighs/calves, check your measurement first before cutting. Most likely the legs themselves will be fine because it has lots of fabric that you gather into a cuff. But the cuff is where you’ll need to do some altering if needed. If you don't have a flat tummy or butt, most likely you will need to add some extra length for that too. 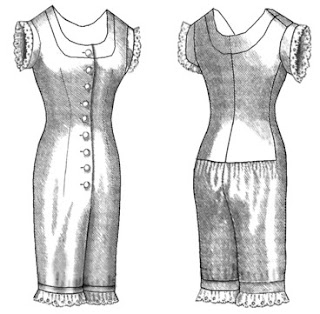 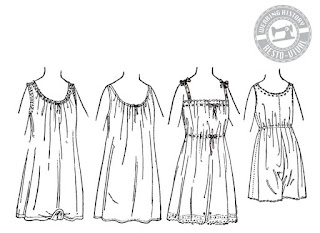 I have a couple pieces of wide vintage eyelet that were at some time cut off of petticoats that I’ve been saving to use as trim on my own. One piece was just long enough to cut in half and use on the legs of the first pair of combos I was making. It’s a heavier fabric but will be fine on my 1870s combos. I have some finer lace to use on the ‘teens era ones. I plan to wear those under my 1914 dresses. 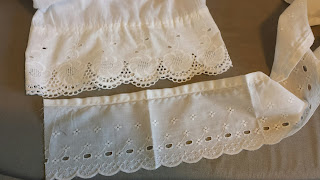 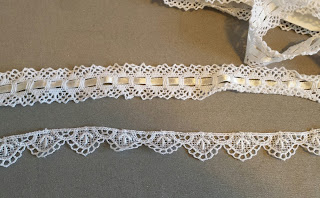 I cut the fabric out the day before the workshop. The main pattern piece, the front, is large. Very large. It’s the entire side of the combinations with the leg, minus a small square piece that is the back. All in one; that’s it. You have to unfold your fabric to have enough width and then fold it lengthwise to cut the two sides. The remainder you use for the square back piece and the facings.
That main pattern piece is really weird shaped. So weird, it’s hard to tell what is what. After I had sewn my facings onto the neckline and the crotch, then I was to sew the back piece onto it. 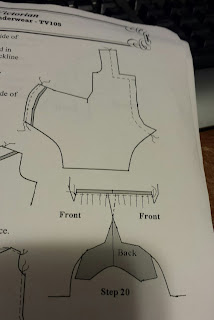 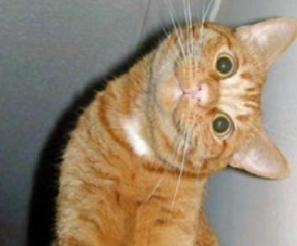 I stared at it and kept laying the two sides down to figure out what end was up and where it would go. At that point I realized there was no sure way to tell what went where. After a couple attempts I finally had it laid out so it looked like the drawing on the bottom of the pattern picture. It’s just a partial drawing so it wasn’t really clear immediately where to sew but I finally got it. That long thing on the left of the pattern appears to be a leg but it’s not. That’s the back half of your drawers.  But until you’ve sewn one of these, it isn’t clear right away. What I am taking from this is, for my next one I’m going to make tiny dots with pencil, or water soluble pen, and mark where the legs are on the piece of fabric. Or maybe I’ll remember what I learned and whip right through it.


I wasn’t going to make this one too fancy other than the eyelet around the legs. I finished it last night at home and put it up on my dress form for a photo. It looked sad, like a sack. It had no defined waist, but it’s just underwear. And once my corset is on top of it there would magically appear a waist. So as I’m prone to do, I went on Pinterest and did a search for Edwardian and Victorian combinations. I found one pair from 1890s and realized I forgot to put my darts in. Oops. I guess I’m not quite done yet. 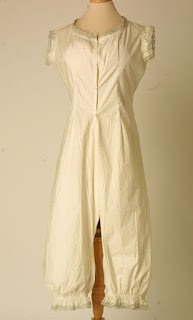 I found quite a few Edwardian ones but very few Victorians. And those are 1890s. So I’m not sure how they would have looked. But one thing I noticed on some of them, they had ribbon drawstrings on the waists. And all kinds of pretty trims. I think making the Wearing History ones are going to be fun. 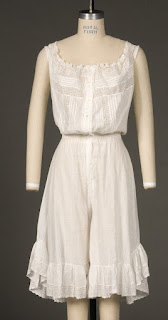 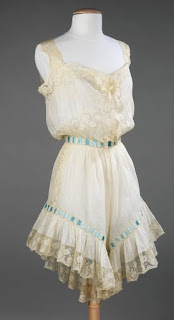 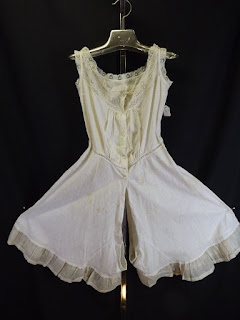 While searching for these photos, I came across someone else’s blog where she made the Wearing History ones. Perfect timing! The Dreamstress
~~Val~~

Posted by Time Traveling in Costume at 9:25 PM