I’m still working on my 1853 purple dress but *Real Life* has prevented me from doing much, and now I have that “blasted cold” that everyone in the US seems to be sharing. So I only have short bursts of energy but at least I can sit and do handwork.


A third portion of my dress, the tablier, is finally done. I had to draw a pattern for it, using the width of my skirt under it as guidance but not quite as full since I was only going to do some pleating on its own waistband. It’s a separate piece from the skirt, worn like the later bustle overskirts. Since it’s a fashion plate, I’ve no idea how they expected it to be done so I used my “artistic license” to come up with my own version. 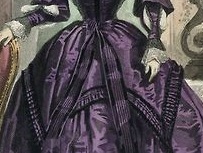 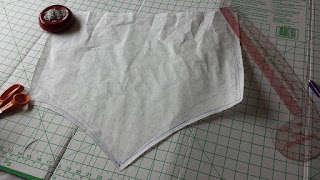 I planned to make it out of four panels, with the curved section being the seamed parts. I cut two pieces out of muslin and gave it a try.  My first pattern was waaay too long, so I folded up the edges to a better length. I also made sure it was wide enough to meet in the front center and the sides. Then I cut the four panels and test pleated them over my hoop and petticoats. It still needs another fuller ruffled petticoat but first things first. 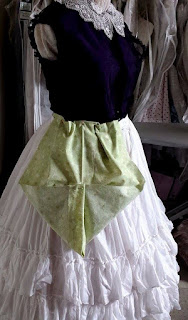 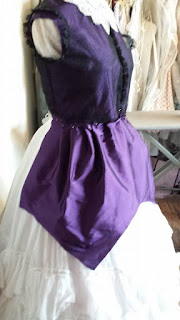 I was looking forward to making the pleated trim that goes around the edges and first was going to just hand pleat them. I cut out and ironed 6 inch wide lengths of my fabric, turning the sides in. 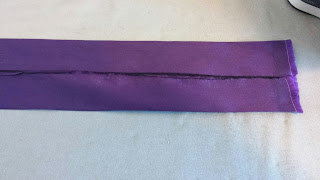 In retrospect, it didn’t need that much turned under but I didn’t want fuzzy edges popping out. It didn’t require any finishing and was the lazy way. I probably could have just turned a narrow edges under and sewn them because the final velvet ribbon trim would cover that. Oh well, live and learn.  It did give it a nice weight though.
I remembered my Quick Pleaters I’d purchased last year at Costume College and got to use those for the first time. I have the small set and used the 1/2 inch size one. They’re available here on Amazon. http://www.amazon.com/Quick-Pleater-Mini-Set-Include/dp/B00II8V7NK
They’re a bit thick so once you pull it out of the pleat, it’s a tiny bit bigger but it’s so nice to have consistently same width pleats. 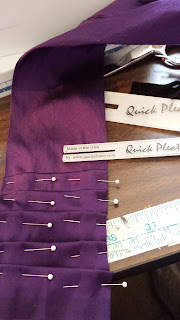 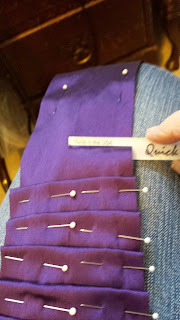 This site has an instruction video using it on the lower right.  http://www.jodeesinc.com/products/quick-pleater . They show it being pleated at the same time you’re sewing. My preference is to pleat and pin, iron, then sew.
After all my pleating was done, I sewed half inch black velvet ribbon along both sides, sewing just on the inside since the outside edges would be sewn to the tablier. What I didn’t take into account was they were straight, the tablier was curved, so I couldn’t sew them flat onto the tablier. I sewed it on the outside edges then tacked it at various points of the inside edges. That seemed to work, although I received numerous suggestions of other ways to do it that would require a lot of ripping and redesigning. Fudging won. 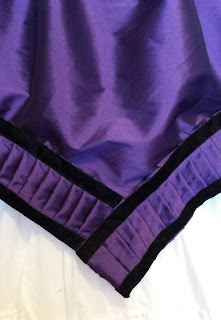 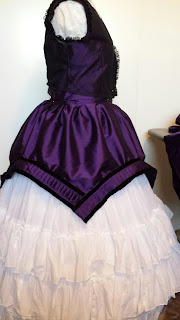 And I tried it over the skirt, which is just bunched up under it since I haven’t finished it’s cartridge pleating. 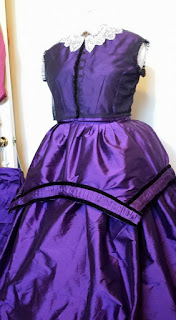 For a bit of distraction I dug through my antique jewelry stash and came up with a brooch for the lace collar. 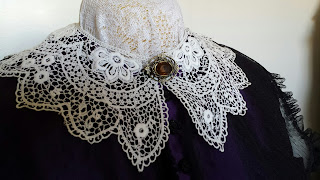 Since I have very little energy to do much I decided now was a good time to finish cartridge pleating my skirt. And Chloe decided it was also lap time. So we both benefited. Next step will be figuring out those sleeves. 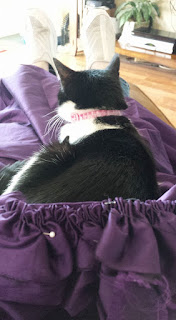 Posted by Time Traveling in Costume at 11:19 AM