IDEAS FOR A COSTUME VENUE

We all know costuming events have been a desert out there for the past two years. And I’d guess that most of us are still in a costume sewing slump too. I’ve continued with my “baby steps” sewing my costumes, or a better description, “bits & pieces”. Right now, I have four different dresses in various stages of construction that get worked on when the mood or energy strikes me, which is mostly about a day. 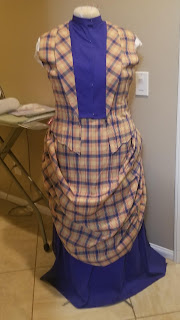 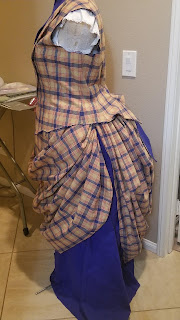 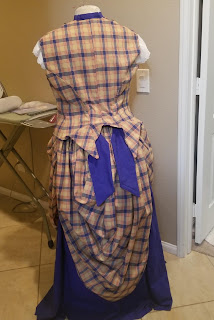 A while back I had recognized that this was becoming a pattern with me; I’d go full-on enthusiasm to start a new dress, and after a short time it would fizzle away. And then another dress would be started, and same thing would happen. I’d put it aside as I had nowhere to wear it so what’s the rush? But eventually one of them would get done, or at least closer to being done. I decided that if this was how I worked, so be it. Don’t fight it. When an event comes up for it, you can be that mad crazy lady again.

Towards the end of the year, things began to loosen up from (need I say it?) Covid isolation, and a few events cautiously started up. There was a dim light in the tunnel, inviting us to come out again. There was hope.

In September, I had helped my mom move into a retirement community and noticed they had a beautiful indoor dinner theatre with a stage, great lighting, and lots of seating. 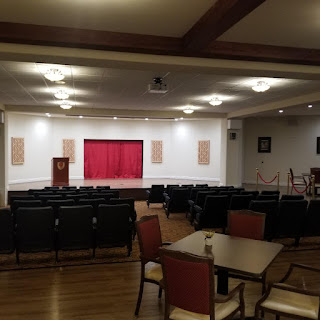 It reminded me that a few years ago I’d seriously begun to plan on offering historical fashion shows to retirement communities, and had even participated in two that my friend, Cindy, put on. Today I had a Memory pop up on Facebook that showed I was already thinking about this 9 years ago, in 2012. A few years ago, there was a really nice location down the street from where I lived. But then we moved away. And now here was a brand-new location only ten minutes away from where we moved to, and I had a connection to approach them about doing it. I had already designed a flyer that had photos of previous fashion shows I’d put on or worked on that I could hand out. I sent an email to the Activities Director at the community, and got an enthusiastic response back. 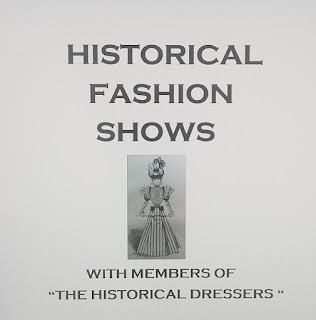 She had the next two months, November and December, open for activities, and after polling the ladies in my pool of models, we decided on November 6. Over the years I’ve done a variety of themes for my shows, even having stage settings like a grand parlor, or an atelier’s dress shop. But for a first-time event I usually do a timeline. It’s the easiest to work with and gives the models of variety of periods to work with, depending on what they have available. The hardest part is making sure we have a good variety of time periods to fill in the timeline.

Most of the fashion shows I’ve been in have had other costumers in the audience, and many of them know the time periods or the differences. With a senior community, you can’t expect this. So, I lean towards making them educational, along with being pretty and entertaining. We’ve found that most audiences are really interested in what’s going on underneath our gowns, in other words, what makes the shapes. Occasionally, if you have time, you can have a model that’s willing to be dressed from the inside out. But in these, our time is shorter, and I like to have examples of the corset, hoops, and bustles to hold up and show them how they work. You also wouldn’t want to shock the audience if they’re not used to them. 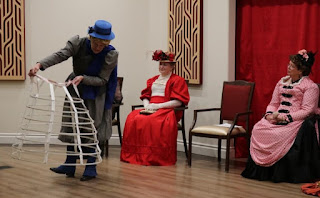 For this show I tried something different, rather than have the models come out one at a time. We were all seated onstage, and then called on to come forward. I thought this would make it easier for us, and also give the audience more time to see us after we’d done our “twirl” on stage. We even have a gentleman who participates, and gives us a hand up. 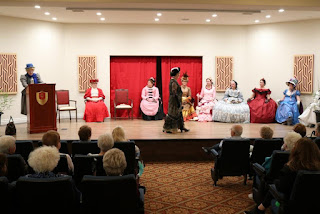 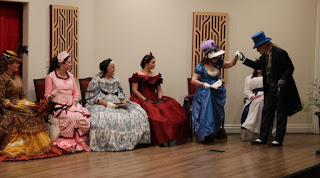 Here Shelley is not showing off her undies, but showing how sheer her cotton voile dress is for summer wear. 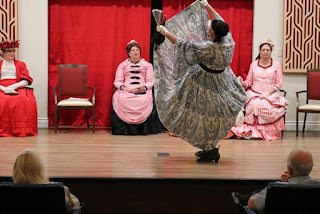 After the show we stepped off the stage and walked among the audience members so they could look at our dresses close up and ask questions, which they did! That also gives me ideas of things to include in the narratives of future shows. And there will be future ones. They were all asking when we would come back so they could invite their friends. The Activities Director gave us the green light for that. We also were asked about two other locations that we might do this in, so we have that to look forward to in the coming year. We were all just so happy to be able to dress up and show off our "works of art" again.

I’m hoping after the holidays are over, the mood might come over me again to finish up all those other dresses. 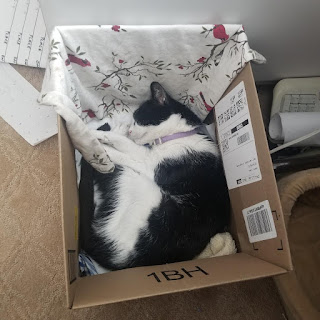 Posted by Time Traveling in Costume at 7:41 PM