My blog last year was very sad. Only three posts for an entire year. But there was barely anything worth writing about. I played around with a couple dresses but didn’t finish anything. Yes, a couple are very close, and I wrote about one in my blog (1887 Autumn Plaid bustle dress)) but to date, none are finished.

Last week I was contacted by one of our fashion show organizers updating us on the status of the Riverside (CA) Dickens Festival, and this year’s theme, so it made me start thinking hard of what I wanted to wear for it. I had a few ideas for new dresses, but really? Did I think I would get it together enough to start and finish a NEW dress by the end of October? Not the way my life has been going. I took a look at what was in progress and decided to picked one from there.

About 5 months ago I tried to get my sewing mojo back in gear. I spent days looking through dresses from my inspiration file, and then cross-referenced my fabrics, all while trying to get a spark going. Something finally kicked in with the 1830s fabrics I’d collected, and boy, did I have a lot of different fabrics for that! I have cottons, I have silk taffetas, I have plaids! Plaids have been hard to find lately, at a reasonable price, so I’d been grabbing any that struck a cord, and were a good price. I still consider this a hobby and a costume, so I don’t throw a lot of money into it unless I have too. These are my pretty fabrics. 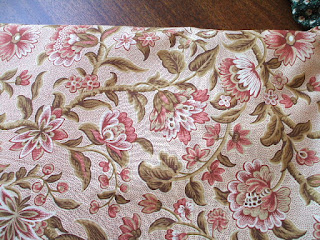 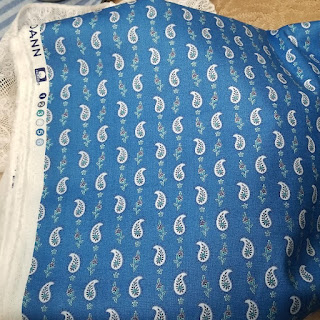 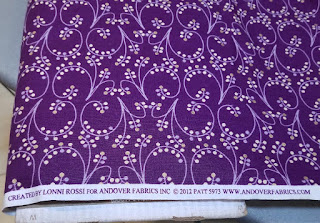 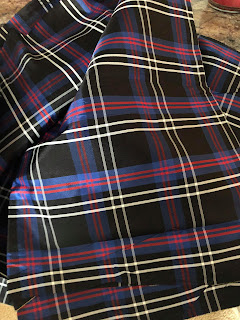 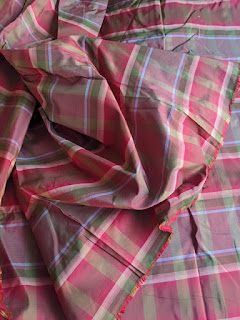 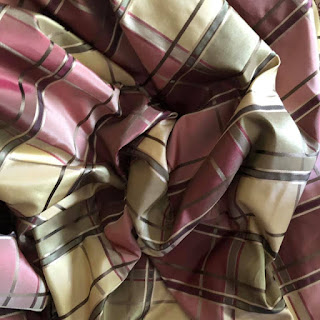 Rather than make yet another Truly Victorian pattern for this period (of which I’ve made 5 from it), I looked at two other ones I had. And this time I wanted to convert the pattern to a front opening. I’d seen it done by a friend at Costume College and you could barely tell it opened there, which is what I was hoping for. I also wanted one that wasn’t off the shoulders. I had Period Impressions 1837 Day Dress pattern that I’d seen made up by another friend, Carolyn, and it was lovely, but she said it was very hard to work with. The Past Patterns #003 1830-36 Full High Gown was the one I chose, which was also the one another of my friends, Cindy, had made up and she said it wasn’t hard to make. 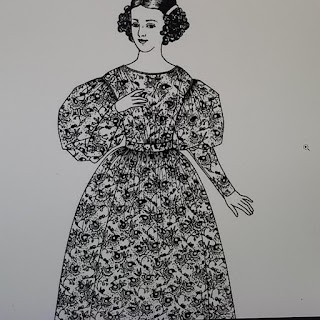 I didn’t have much luck in trying to find some extant examples of the ones not off the shoulders; most of what I found weren’t. I also read front closures were more likely for work dresses, like this brown one. 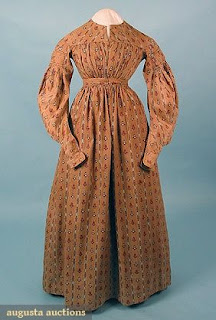 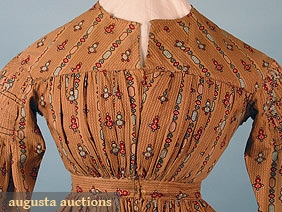 But I had an idea of putting a decorative placket down the front to help conceal that. 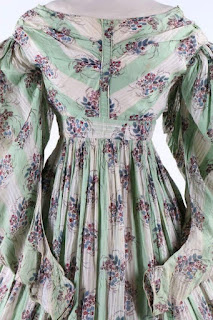 Since this was going to be a test pattern, and also the silk taffetas were a little fancy for a closed neckline day dress, I decided to start with one of the cottons. The purple cotton was my favorite, and I also had that fabric the longest, so it had plenty of time to age properly. Last August I cut out my muslin and roughly fitted it, knowing it would have to be fitted on me with the gathers at the shoulders down to the waist. I cut out the purple bodice pieces, flatlined it, and sewed it together. Later I sewed the skirt and sleeves, and set them aside. That was as far as I got, because I couldn’t go farther without the bodice being fitted. 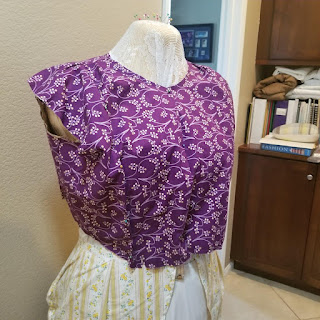 Jumping forward to last week with the Dickens Festival, and I started thinking about this dress again. It had some aspects that would fit with the Festival’s fashion show theme and it was slightly close to being done. And then I came across another version of a work dress that Past Patterns had done in the meantime, converting it to a front closure, #017.  If I had known this pattern was out there, I would have bought that and saved myself a lot of work converting #003 to a front opening. Today I bought it for myself as a late Xmas present, and I may use that for my other fabrics in the future. https://www.pastpatterns.com/1830s-to-1840s-jacksonian-era/workdress-with-three-sleeves-pattern 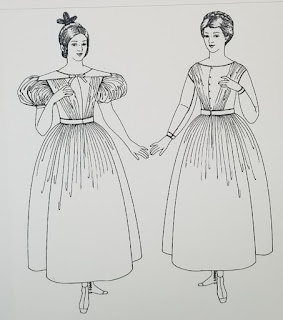 And then I remembered one of the dresses from my very favorite series, Cranford, and Return to Cranford. This was the series that started me on my love of 1830s.  The dress Imelda Staunton wears numerous times was BUTTONED DOWN THE FRONT. And just look at those magnificent sleeves of hers! This certainly didn’t look like a “work dress” the way she accessorized it up. 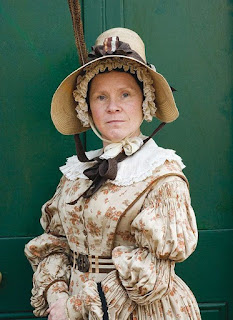 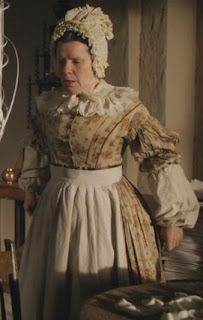 I also made a note of her belt, and saved this photo of a red plaid dress from another exhibit I saw. I think a black belt on mine would look good. It was also plaid so a two-fer. 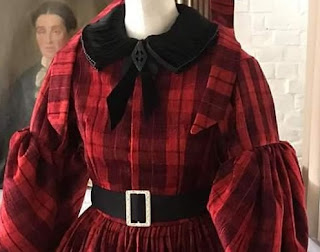 Since I still didn’t have anyone to fit the pleating on the front of my bodice on me, I pulled out the skirt, which I’d forgotten I’d already sewn the side seams, and this made it quicker), and began to cartridge pleat it. I got to use my new package of Tiger Tape I’d bought recently for this. I heard about it from another costumer, and its pre-marked for the ¼” that we use for pleating. You can use any width you like. Its slightly sticky but I found mine didn’t stick very well and used some pins to keep it in place. Others said they had no problem with it sticking, so maybe mine is a bit dry, or its my cotton fabric. I bought it on Amazon but quilt stores carry it. I don’t know about fabric stores. Because my eyes made the tape markings a bit blurry, I marked every other line w/ a dot of black felt marker to make it stand out more so I wouldn’t miss a stitch. I used one 18” piece I cut for the entire skirt. The roll comes with 30 yards. 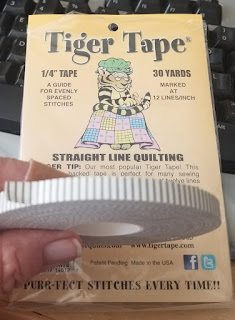 My sleeves also were sewn together and I plan to baste those in today. I pinned my skirt onto my dress form to see how it looked. The pattern called for 4 panels of 45” wide fabric for the skirt but I only had enough fabric to cut 3 panels for it. I think it will be fine. 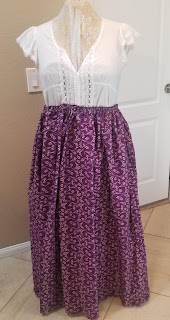 The end of this week Shelley Peters is holding a sewing workshop again, so I’ve decided to go up on Friday and ask her to fit my bodice for me. I may get this done by this weekend! Since I like to name my dresses to remember them, I think this one will be Indian Gardens.

While I was reading all the information in the Past Patterns booklet, I kept looking at the paper doll drawings she’d included of all the underpinnings. One thing stood out to me, a stiff ruffled “bustle” on the back of the petticoat. 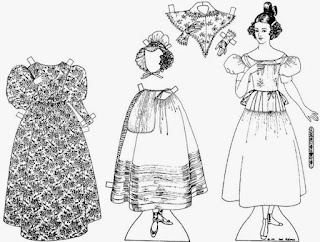 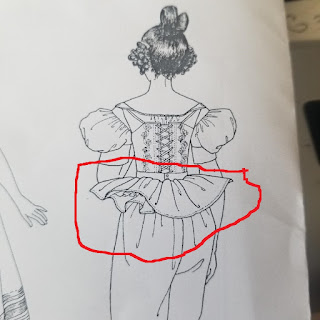 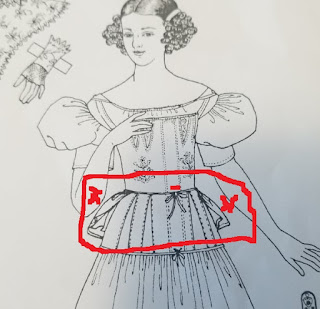 I know they wore corded petticoats under their skirts at this time, and I’ve also used a cheater one using a quilted fabric that I pleated the waist to hold it out. But it didn’t have the fullness up at the waist that they had. I wasn’t sure about the accuracy of this “bustle” because I assumed they’re were from the much later bustle period. So, I asked on a Facebook group, 1730-1830 Clothing Construction Support Group for any insight. They confirmed that this was authentic, and was documented in the 1838 version of The Workwomen’s Guide, with description and diagrams.

I first wanted to try and buy one already made since I didn’t want to start yet another project, but had no luck. However, after talking to those ladies, and seeing how easy it is to make, and also happen to have quite a few yards of a denim twill in my stash, I’ve decided I’m going to give this a try. This is one that one of the ladies there made. There is also a similar one in the American Textile History Museum, in Lowell, Mass. 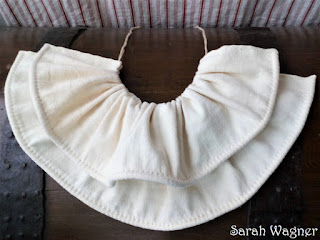 To further assist me, there is also a video on the American Duchess Youtube page showing how one is made.
https://www.youtube.com/watch?v=iGYZTiQWFXY&list=PLqq0sGYvo3WKbTsM5e1YzMrwbSc0NmSze&index=8
I need to get the twill fabric down off of one of my closet shelves so I can start it, but I don’t know why that seems so hard to do these days. Baby steps, girl, baby steps.
Posted by Time Traveling in Costume at 3:47 PM