I normally just put buttons and buttonholes on my bodices because it’s easier for me, and I can adjust it easier if I don’t get it quite right, or my size changes. I’ve used hooks & eyes in the past but it’s very time consuming, and getting the hooks to line up with the eyes is enough to make you pull your hair out. I've also tried the hook and eye tape but I had no idea how to insert it. I butchered it and it wasn’t very pretty. I decided to try it one more time. I got to look closely at some in a bodice, and take pictures of them, while I was in a sewing workshop, so I felt a little more confident in trying it this time. It still was a little confusing figuring out how far back from the edge it should go but not show from the outside. And what happens to that overlaying flap of the fashion fabric that wants to pull away and open? Ah, a heavy duty hook and bar (like they use for trousers) solved that problem at the neckline and the waist. Until I actually wear it, I won’t know just how good that works. This is a gathered front bodice so it’s not pulled tight like a fitted one would.
Another issue I had was the ends of the tape. There’s hardly any gap between one hook to the next so when you cut through the middle it doesn’t give you much to turn under. My ends look frazzled. It wasn’t until after I had one bodice done, and went to the next, that I tried removing the unused hook and it gave me more fabric to turn under. So why didn’t anyone mention this to me? These are the tales of my struggles. 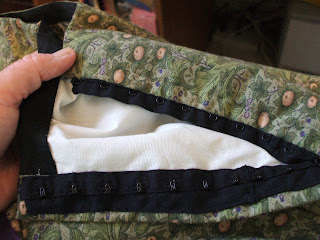 So, the closures are complete, and I can start on my trims. I cut some bias strips of the purple silk taffeta and sewed it an 8th inch in on the front edge of the sleeve cap and the cuffs. Then I turned it over to the inside, folded the edge under, and slip-stitched it down. From the outside you only see a fourth inch of the trim and honestly it looks almost like piping. I love the way it came out. 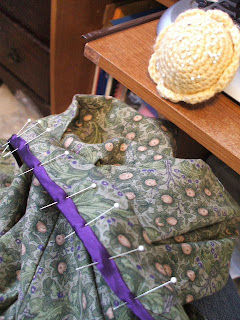 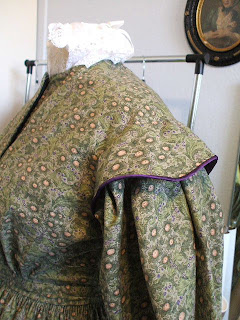 Even though I wasn’t doing buttonholes, I still wanted faux buttons for color on the bodice. I wanted to make covered buttons but not use the modern metal ones. My idea was to use a regular button and cover it with the silk by making a yoyo, and gather it around the button. I tried it with a dome shaped button with a shank, which looked pretty but flopped all over the place when sewn to the bodice. It was suggested to me to use flat buttons and create my own shank with thread. So I picked up a bunch of cheap flat buttons, covered them, and found that the part of the fabric drawn to the center in the back provided a perfect shank. 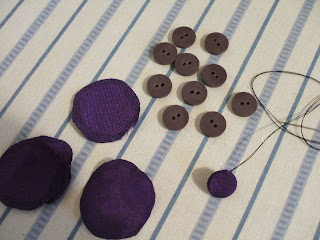 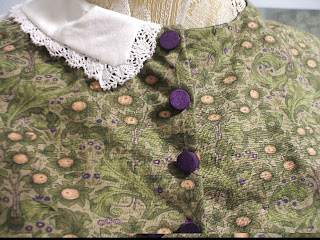 Once I finished covering it, I left the needle on and sewed it directly to the bodice. It took quite awhile since there are ten buttons down the front, and one on each cuff. The purple buttons made a very striking contrast to the olive green.
I made my collar from the pattern provided, and tried sewing some crocheted lace between the two pieces and turning it right side out. Except it was catching in the seam, and when I ripped it out, some parts of the delicate lace would tear. So I asked for some help again from my costume friends, and was told about basting the lace to the outside underneath the collar. That also makes it easier to remove for washing or replacing if it’s torn. See? I learn by baby steps. I basted the collar to the inside of my neckline. This is so it can be removed for washing, since the collars are mainly to protect the gown.
Now to make a belt out of the same purple silk. A couple suggestions I got was to cover a stiff fabric or buckram. While at JoAnn’s in the home fabrics drapery department I saw a roll of crinoline that’s used for stiffening the bottoms of curtains. It was wide but when I folded it in half, it was exactly the width that I wanted. I tacked the fabric to the back of the belt with a glue stick, turned the other edge over it and under, then tacked again. I whip-stitched the edges together on the back. Since the belt was too wide and too stiff to go through the vintage belt buckle I had, I just sewed the buckle to the front of the belt, and made a little cover of the fabric over the middle shank. 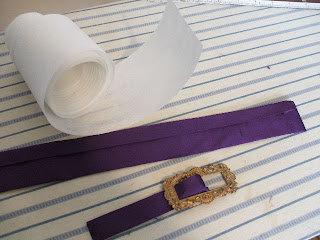 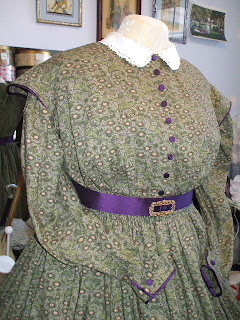 So, on to the blue and white cotton lawn gown. I did the cartridge pleating on my skirt, and attached it to it’s waistband. I was a little concerned about the fit of the bodice. I’d cut it out the same time as the olive one but for some reason the blue one fit tighter, and wasn't fitting as well at the waist. So I made the decision to rip out part of the waistband and opened up some of the gathering to add 2 more inches to the opening. I also discovered there was a pattern piece I’d cut out, and forgot, that was an extension of the waistband. So I’m going to need to add that piece to the olive dress too so it has more than the half inch overlap on the waistband. Even though I didn't want to cause more work for myself, I'm glad I did.
I bought a navy blue silk ribbon when I was in San Francisco at the Ribbonaire store, and have decided to use part of it as bows on my lace day cap, and maybe a bow at the neckline. I was trying to decide if I wanted to use white covered buttons or do them in blue. After doing a test one, and asking for feedback from my friends, the blue buttons won. The navy blue silk ribbon was a lot more delicate than the silk taffeta and a couple times I’d get runs in it. So I had to sew it very gently. But I’m very happy with how they came out. This shows my lace cap with the bows on the side too. 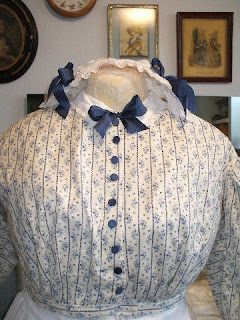 I didn't do the little sleeve cap on this gown but I love the look of it on the olive one so if I have time I may cut out one and just sew it on top of the sleeve. It's so cute! I didn’t do a ribbon trim on the cuffs of this gown. I may use white undersleeves with it so the white cuff will sticks out.
For the time being, here are some test photos of how they’re fitting. 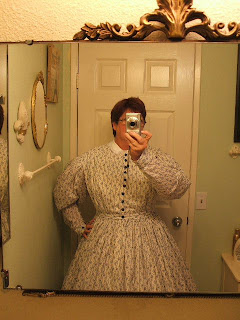 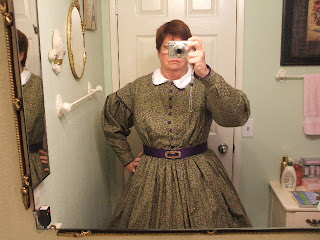 I still have two weeks until I need to wear them, so I have time to do some alterations, and then start covering my bonnet. I have a straw spoon bonnet that I’m going to line the inside with pleated ivory silk taffeta, and have a cluster of purple and white flowers in the top on the inside. On the outside I have a lighter purple silk ribbon bought from Ribbonaire that I’ll use to tie around it.
*Added note* It was suggested to me that instead of gathering the front and back sections of the bodice, to pleat it. This would make it lay flatter and not blouse out. I think that's a great suggestion. At some point I may again alter the gathering on these and pleat them.
Posted by Time Traveling in Costume at 3:01 PM