A Short Detour Making a 1903 corset

Started Jan 2, Finished Feb 27, 2012
Last December Jennifer Rosbrugh of Historical Sewing challenged any of her readers to try making a corset in an online group on Facebook. The pattern we would use was Truly Victorian’s new 1903 Edwardian S-bend pattern (TV E01). 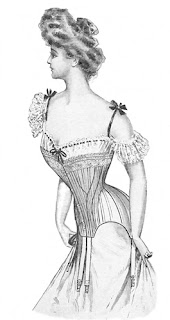 We used the whole month of December to start purchasing the supplies, and asking questions on Jennifer’s Facebook group. The plan was to start working on a muslin/toile in January after the holidays were over, and hopefully finish the corset by the end of February. During this time, Jennifer was posting short videos explaining the pattern sizing, fitting steps and making the muslin, and setting the busk in. Having a visual aid really helped those of us who are challenged by reading directions. And she spent many hours answering all our questions.
So then I got down to work. I had the pattern already, and had bought this beautiful blue floral coutil from Farthingales a few years ago at Costume College, along with a blue binding to finish it with. 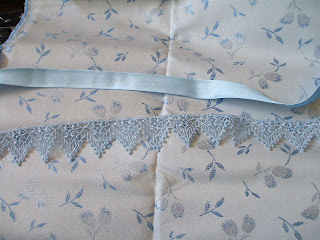 Our first job was to make the bum pad and bust pads, which were very simple things to sew and stuff. Of course I had to find something to confuse me, and it was the bust pads. There’s an upper and lower pattern piece but I didn’t see that at first.  After seeing examples of these with a finished corset, many of us observed that the S-bend was visually created by the fullness of the bust and the tiny “bustle” in the back. Although, while trying on the corset muslin, we felt it pushing our hips back slightly but without contorting us. My observation was this style of dress in 1903 STILL had an appearance of a slight bustle. 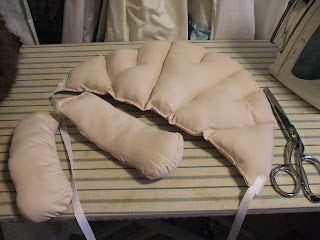 Figuring out my size of the pattern wasn’t too hard. I was a little confused by the high/middle/low bust but that all depends on the fullness of your bust. You start with a general size according to the pattern and eventually during the fitting it makes it clear by how it fits you where to cut the top of the corset, leaving it high, middle or a low cut. After my muslin was done, I realized it might have been better to make it from a sturdier fabric. I used a very dense cotton but was later told it really didn’t matter because the idea was that it fit around me.
I had a friend make me a grommet strip made of canvas to sew on the back of my muslin, and the front of the corset was sewn shut for my fitting. It was a little hard to get it on me. My husband tried to help lacing me in it but we all know how that works. I depended more on my dressform. On my first photos, I forgot that the bum pad goes UNDER the corset so just ignore that. It sits at the waist, dead center in the back, and your lacing will be really open wide at the hips to go over it. We all had problems with the bust area because it was just floppy. But without the sturdy coutil and boning, it was expected, so we had to try and ignore the floppies. 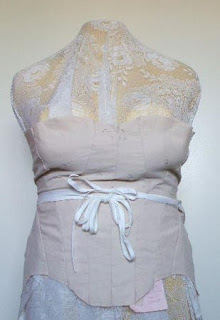 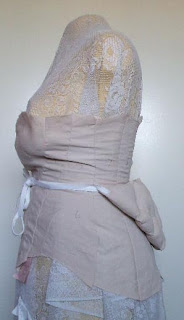 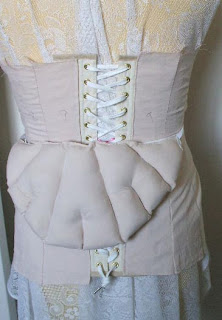 I had to take a break from working on mine at this point because I had two costumes I had to finish so I spent about two weeks working on those. Then I was ready to get back to my corset.
Prior to cutting out my coutil, Shelley Peters, a well known corset maker, had stopped by to check a measurement on me, and looked at my coutil. She said it was a little thin and suggested a lightweight twill to flatline it with. She also gave me a bit of advice to throw out all my concepts of fitting a Victorian corset on me. This Edwardian one mostly needed to fit at the waist, and the rest of its contouring on me would be done by the placement of the bones. The main difference in them was my Victorian one has bones straight down each seam, whereas the Edwardian one crosses the seams at an angle in a few places.
At this point, things began to go really fast. On Saturday I cut my coutil and twill, flatlined them. I reviewed Jennifer’s videos again how to put the busk in, set in my grommets, and sewed up all the seams. The final step was clipping where the joints of the gussets meet at the point, then topstitching along the outside edges of the gussets. 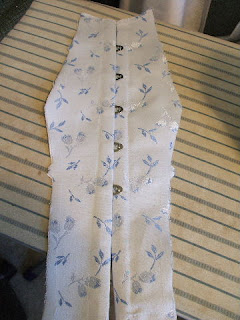 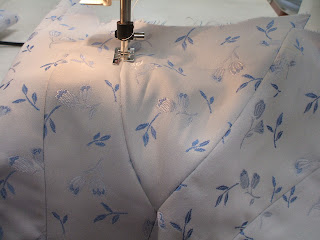 Now all I needed was to buy my bones & boning tape. When I found out Shelley Peters was having a sewing workshop the following Saturday, I decided to go and buy my supplies from her. And who doesn’t want to spend the day with a bunch of friends sewing? 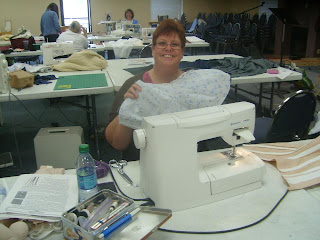 While I was there, I sewed the boning channels by sewing down the middle of the ¾” wide tape to hold two bones & sewed these to my corset.     -TOP- 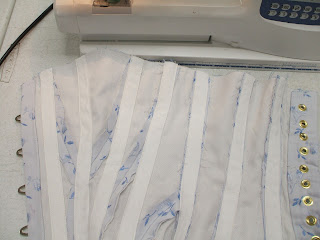 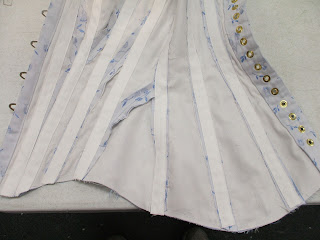 On the bust gusset, the tape was sewn down the center of the gusset but not on the hip gussets.
Next up was binding. I had some white lace in my stash I decided to use, and was going to tack it on after the binding was done. But after trying that, I realized my lace didn’t have a finished edge, so I ripped out the binding (fortunately only done on one side), basted the lace in, then sewed the binding down again. I machine stitched the binding on the corset right sides together, then folded it over to the back to handstitch that.  The bones were pushed in, and the binding was sewn along the bottoms. At one point I ironed the binding and I melted part of the lace on the front. So once again I ripped out the same binding, removed the lace and replaced it. Three times are a charm, they say. 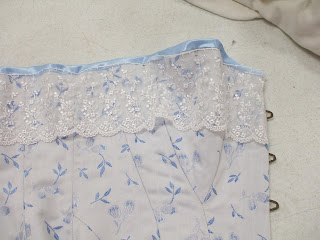 By Monday afternoon, I was all done with the binding, and I was finished! 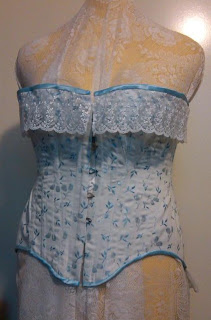 Now I want to make the Truly Victorian patterns for the blouse and skirt. I’d love to do a dark color but have a couple white cotton voiles in my stash that will work for my first ones. 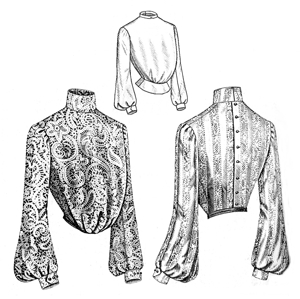 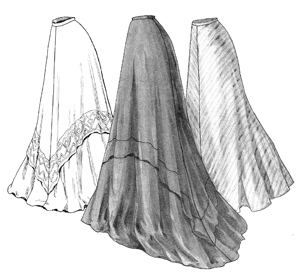 Posted by Time Traveling in Costume at 9:53 PM