My Wardrobe at Costume College PART ONE

A week has passed since I got home from Costume College; most things are unpacked and put away. It took me two days to get all my photos weeded out, cropped, and uploaded to my online album. So now that I’ve gathered a few photos of me wearing my costumes, I can write my blogs about them. I wore five costumes, and my primary color this year was black. Unfortunately they don’t actually photograph well so the better ones are from home on my dress form. 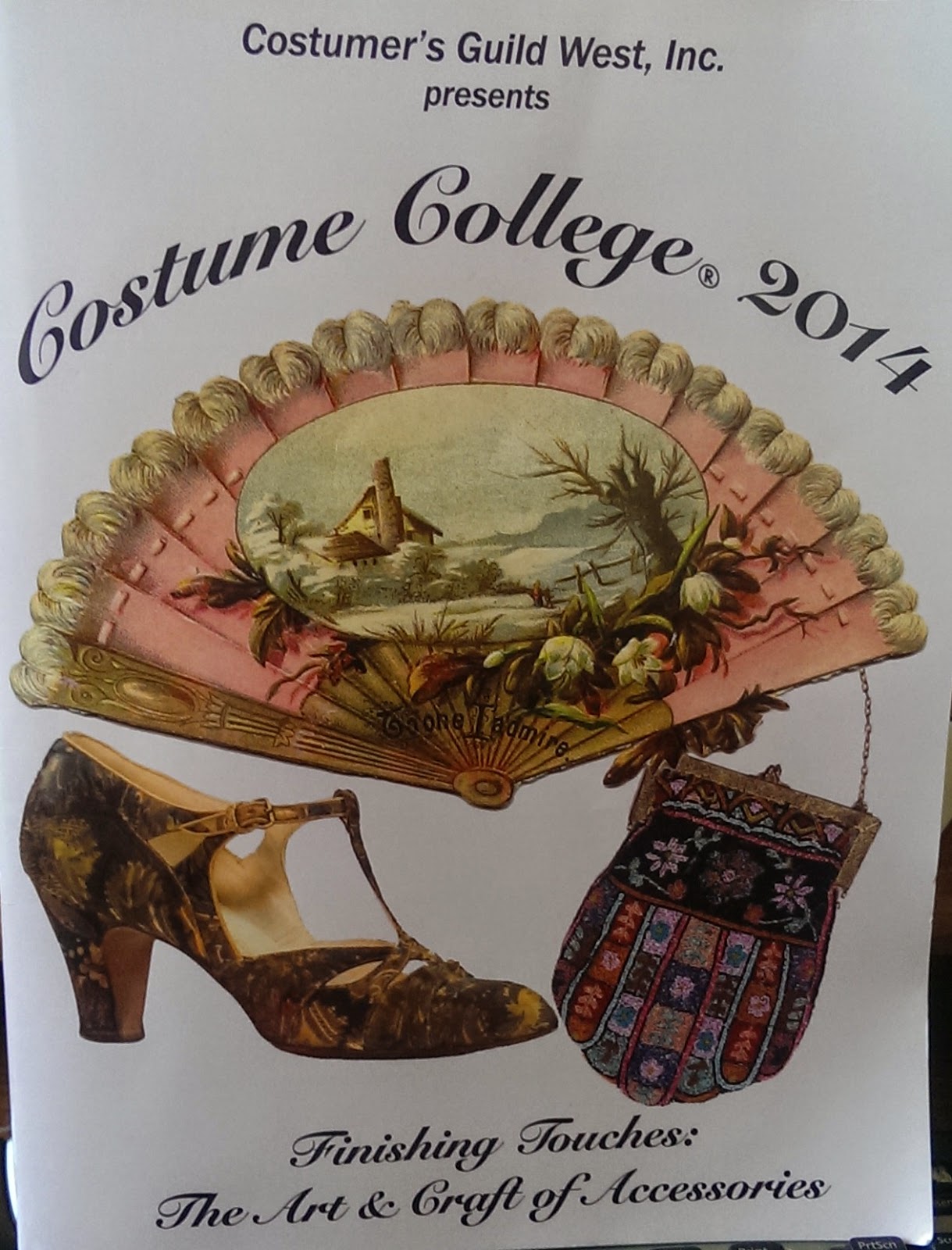 This is my photo album from the convention. Costume College 2014

I ended up trying not to kill myself and finish another gown, so I did a repeat of my Regency Red/White/Blue outfit and so did two of my friends. I wore two dresses on Friday; the Regency during the day, and my 1873 Dia de los Muertos mourning gown for our Murder of Crows theme that evening at the Ice Cream Social. On Saturday I wore my 1837 Midnight Mourning during the day and to teach my Watch class but so far only have one photo of me in it and none from my class. That evening I wore my 1837 Persimmon dress on the Red Carpet and for our UnGala Dinner at the hotel restaurant. On our final day I had a workshop in the morning where I had to fit myself for an Edwardian belt so I chose to wear my street clothes and later changed into my 1910 Black Ascot dress for the Sunday Tea, “Ladies Day at the Ascot Racecourse”. By that time it actually felt good just to put modern clothes on when we went to the Garment District the next day to shop for, you guessed it, MORE FABRIC.
So to start with Friday, both of these dresses have been shown here before, so nothing new to write about them. But here are some photos. I added some more pleated blue ribbon along the top of my Regency bonnet but with my head up it’s hard to see. For my 1873 mourning, I wore an antique black Bebe bonnet (these are ones that are small and just fit on the back of your head) that only comes out on rare occasions and added my lace veil to it. It was nice for a change not to stress over getting something made.  And the good thing was, neither had been worn there before. 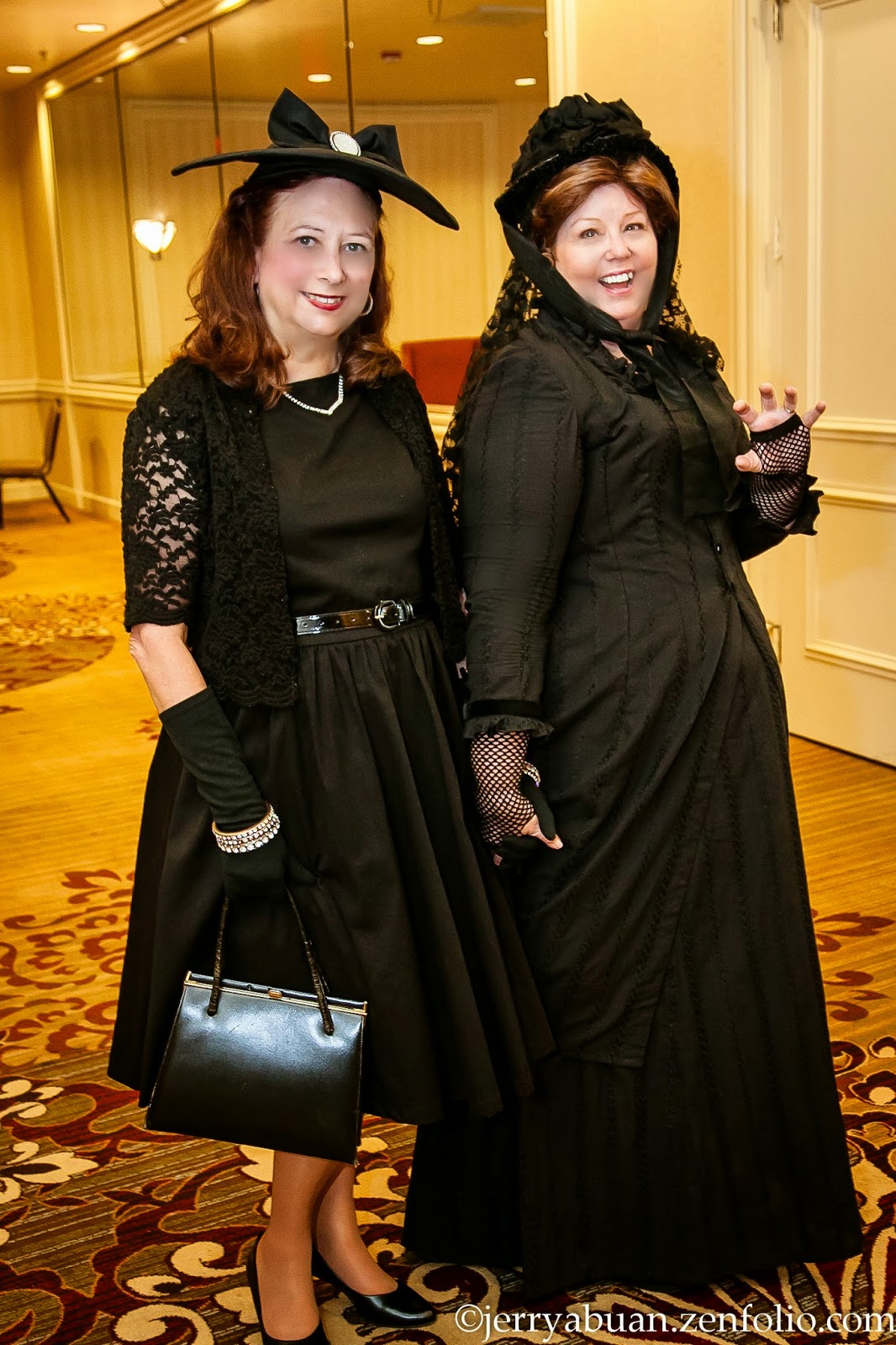 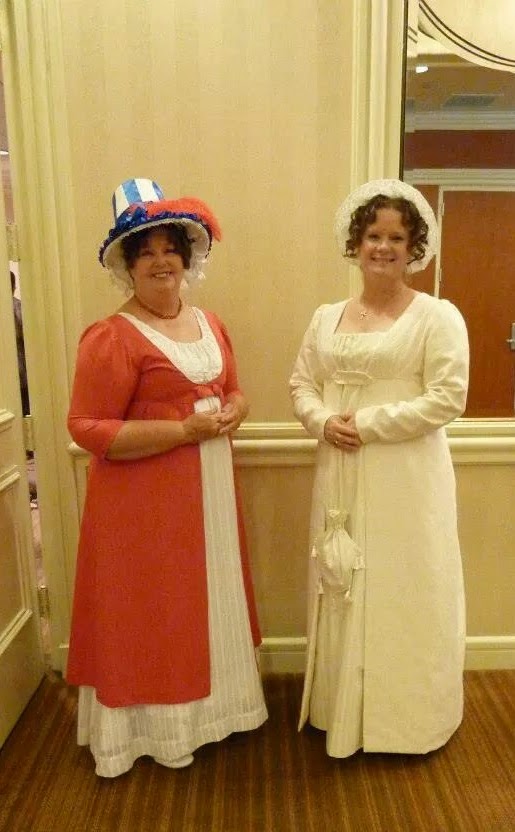 My black 1837 Midnight Mourning gown was finished in plenty of time but I left making the belt during the final week. It was made from two inch wide black velvet ribbon and I attached an antique belt buckle to it. I planned to tucked my watch into it but it kept sliding through. So a last minute addition was a small self-fabric pocket sewn to the dress that would be under the belt. 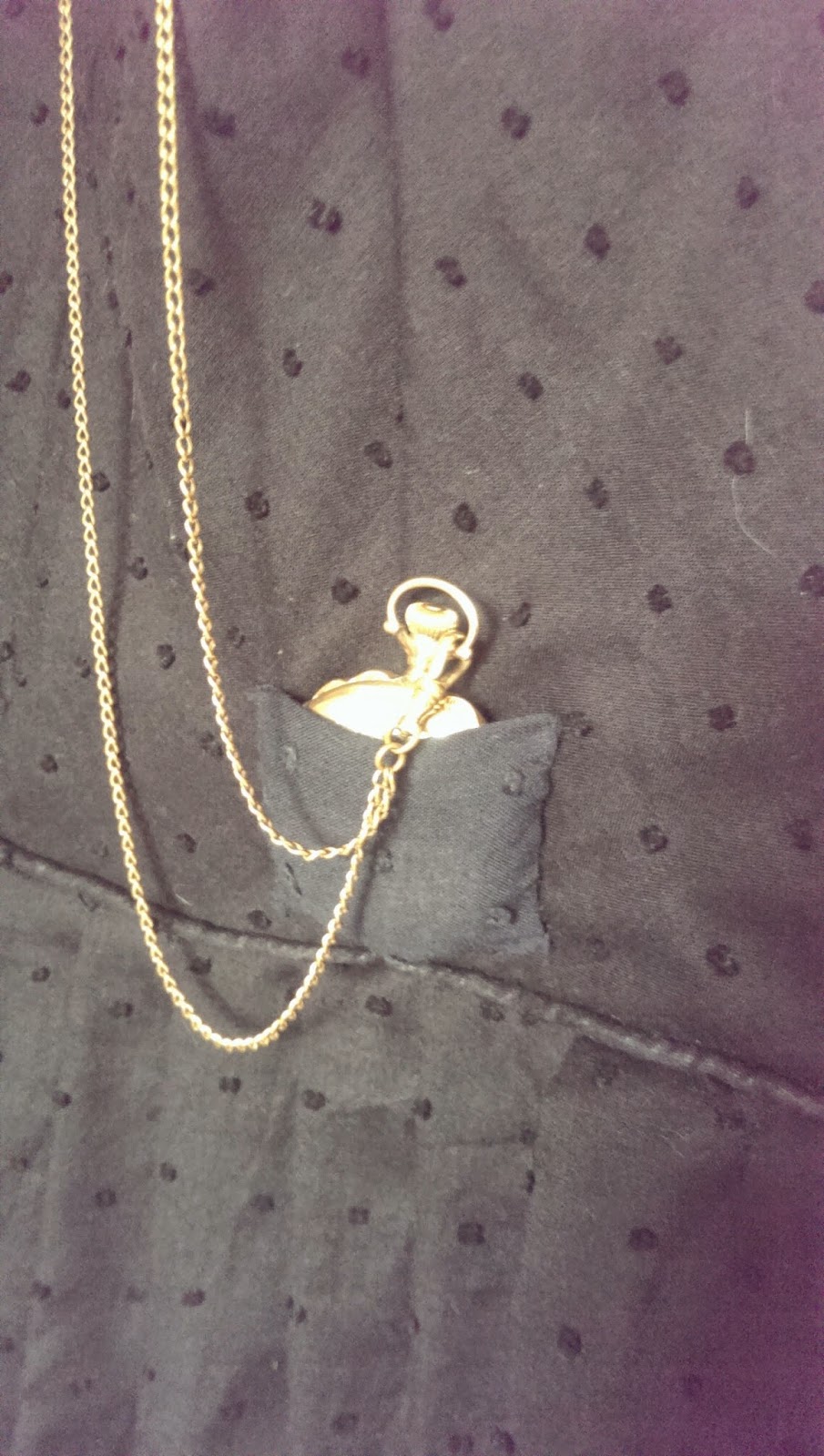 I couldn’t find any documentation of how the ladies kept their watches from sliding through so this seemed logical to me. Just in the last couple days while discussing watches on one Facebook group, one lady said she had an antique belt that had a watch pocket sewn to the back and is going to find it and share the photo of it. That’s what I did on my other belt for my Cranberry 1837 dress. So that’s awesome my brain is thinking the right way.
This is my completed dress at home. I tried making a fichu out of a sheer polyester but it kept sliding against the cotton fabric and up around my neck. While at CoCo I asked a few knowledgeable people who suggested cotton mull. So we bought some in the Garment District for future use. 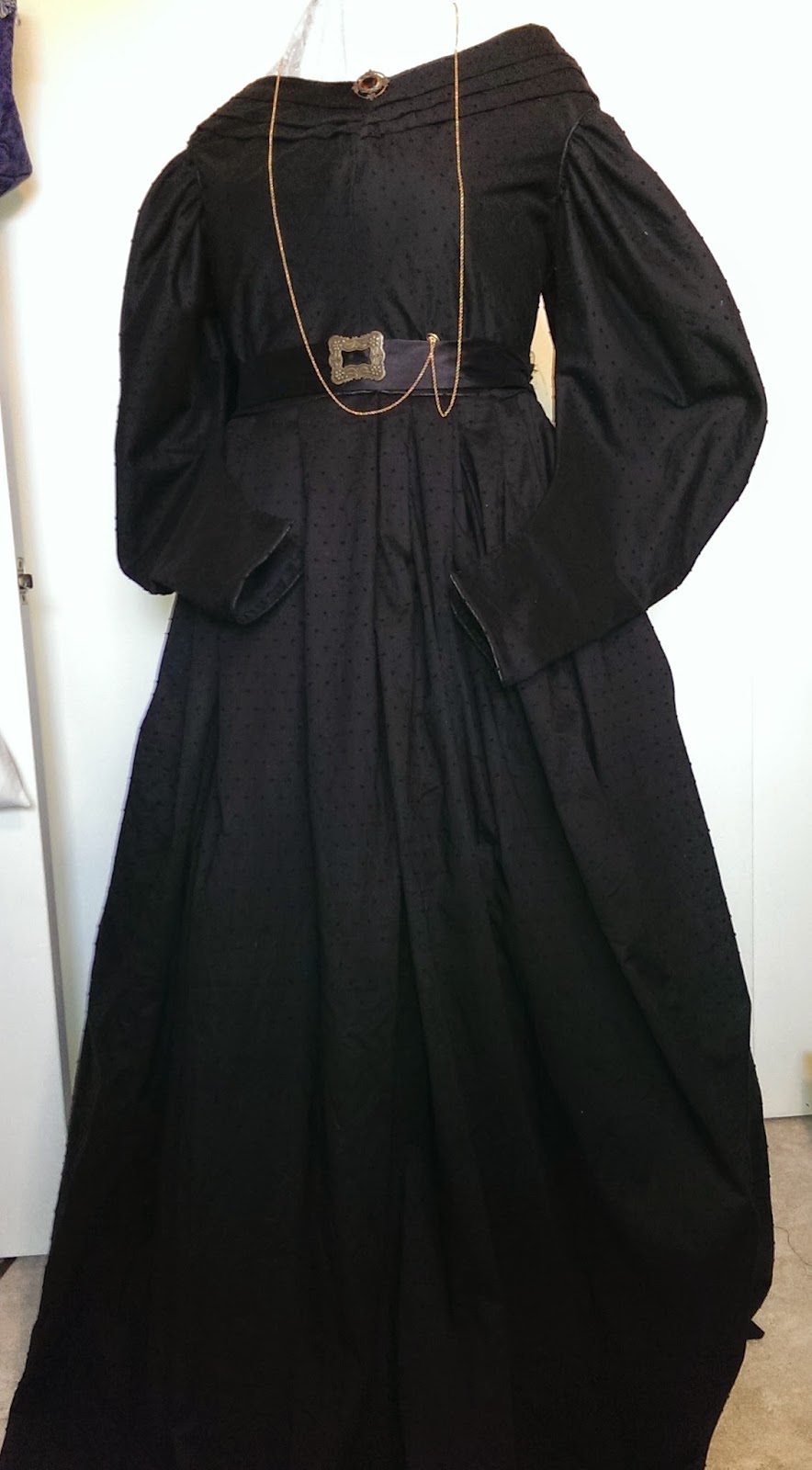 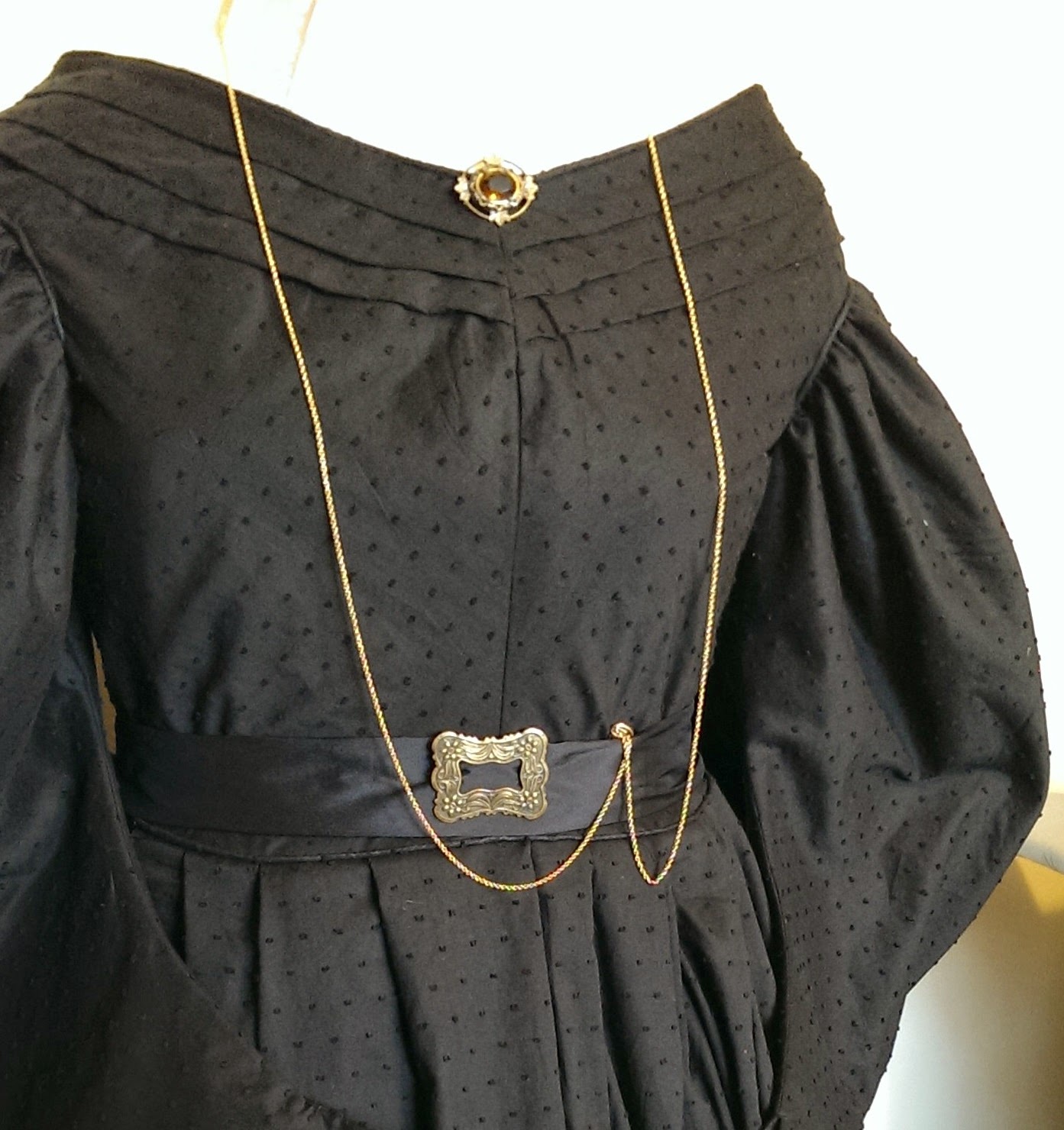 For my lace cap I called in my friend Cat ( aka Hatmaker Extraordinaire),
Minerva Manx on Etsy  for help in making that. We used the two paintings I had for inspiration, and she told me to wear it towards the back of my head. 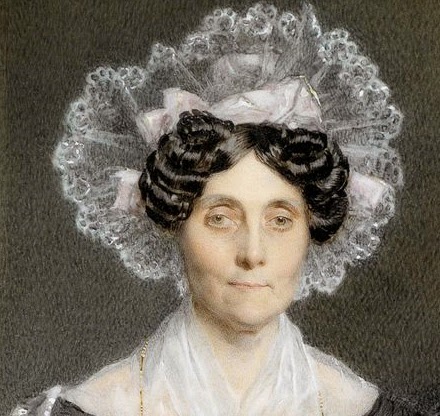 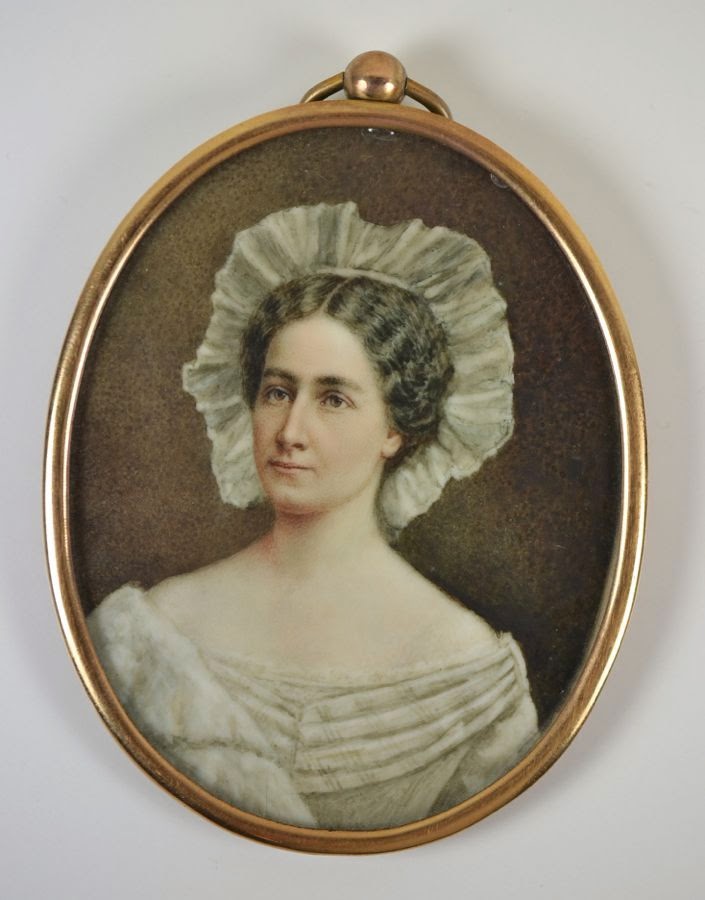 I used a stiff embroidered polyester I found at JoAnn’s that looked similar to the painting. It had enough body that it could almost stay up by itself. While she was testing the pattern she also made one in cotton for me that came in real handy wearing with my Regency bonnet. 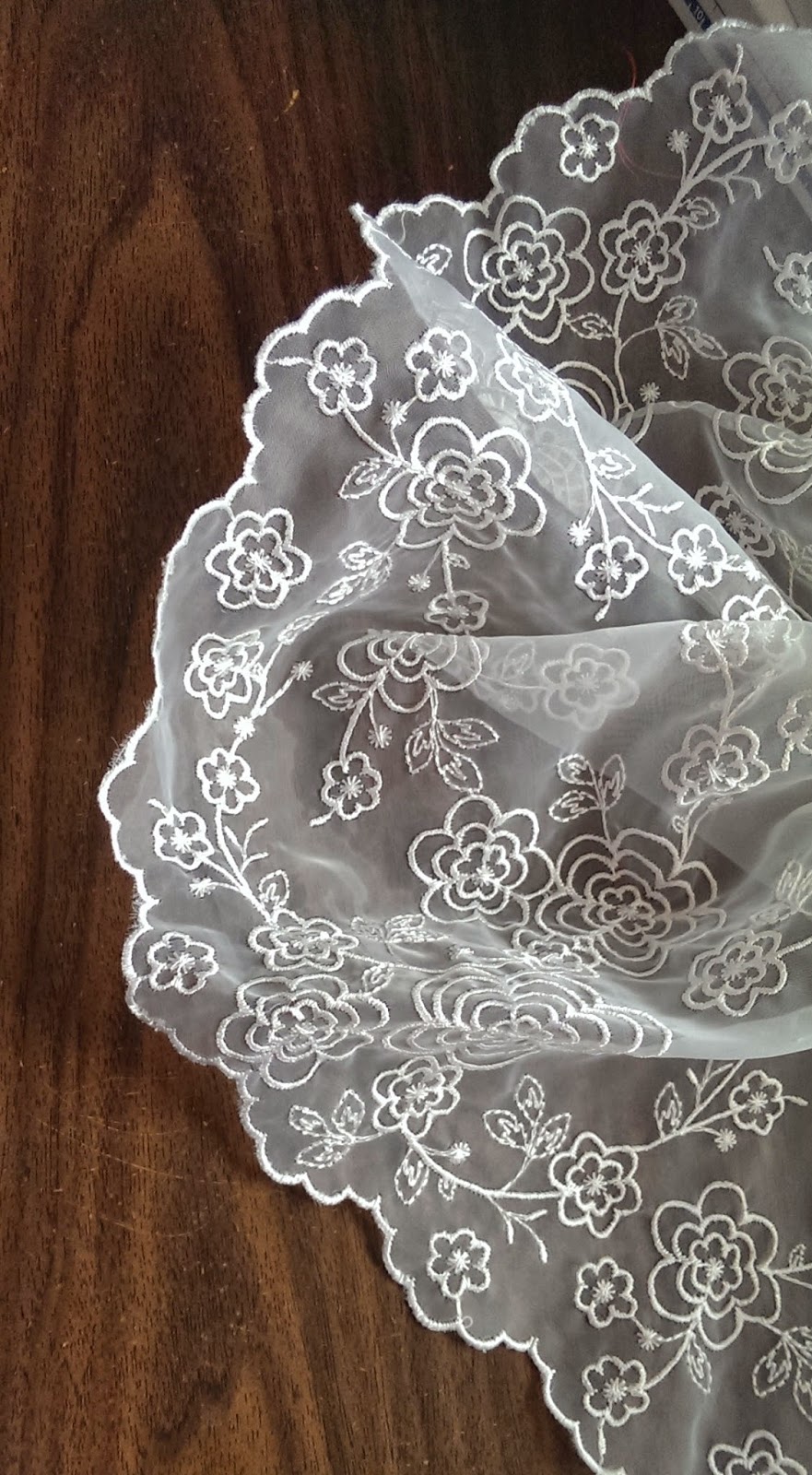 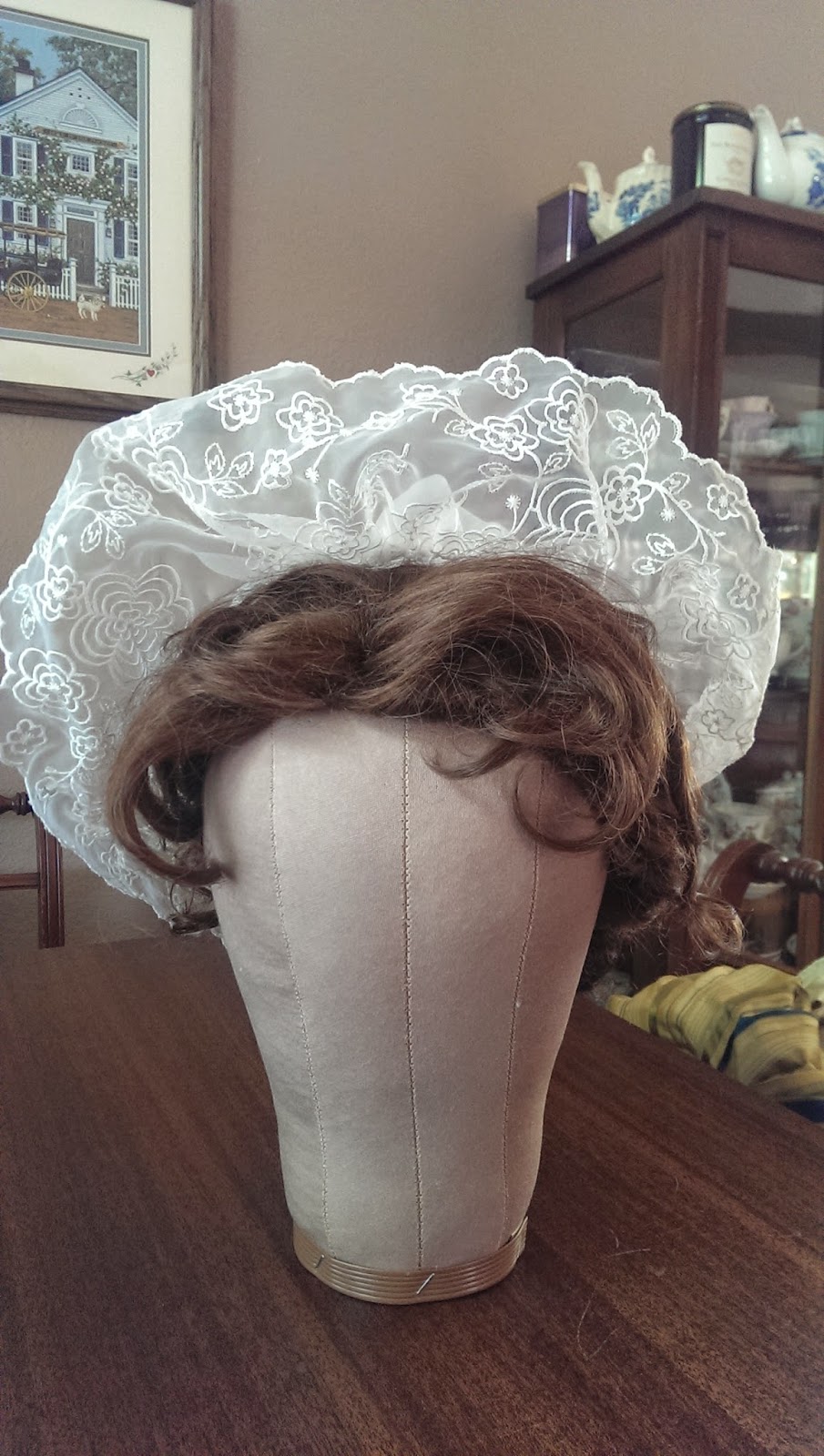 My wig was styled by Wig Creations by Conni, and it was her first time doing this time period. She mainly does wigs for cancer patients and for the La Jolla Playhouse. With me bringing in all kinds of requests for different time periods she’s having a great time doing them. I had her copy the hair style of the Lady in Black that I copied my dress from. She had tight curls up around her temples. I’ve been making an album up for her of many different time periods now for a reference guide. I think next up is an Edwardian Gibson Girl style because for some reason that’s one I’ve never had. 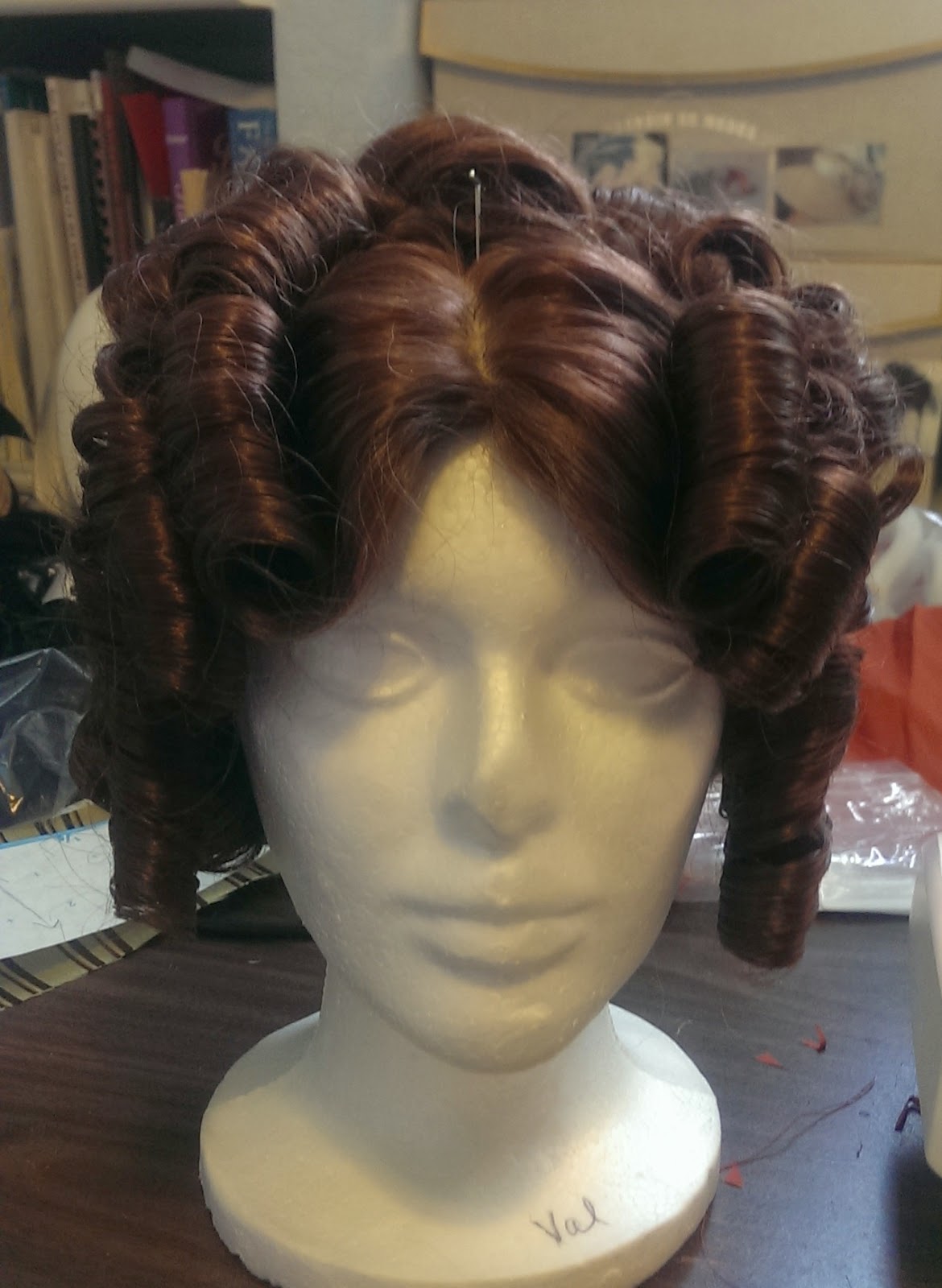 So far this is the only photo I’ve found of me wearing my gown.  You can see my long watch chain hanging down from my neck and my watch tucked into it’s little pocket under my belt. And notice Cindy’s lace cap under her bonnet? That’s the white cotton one Cat also made for me. 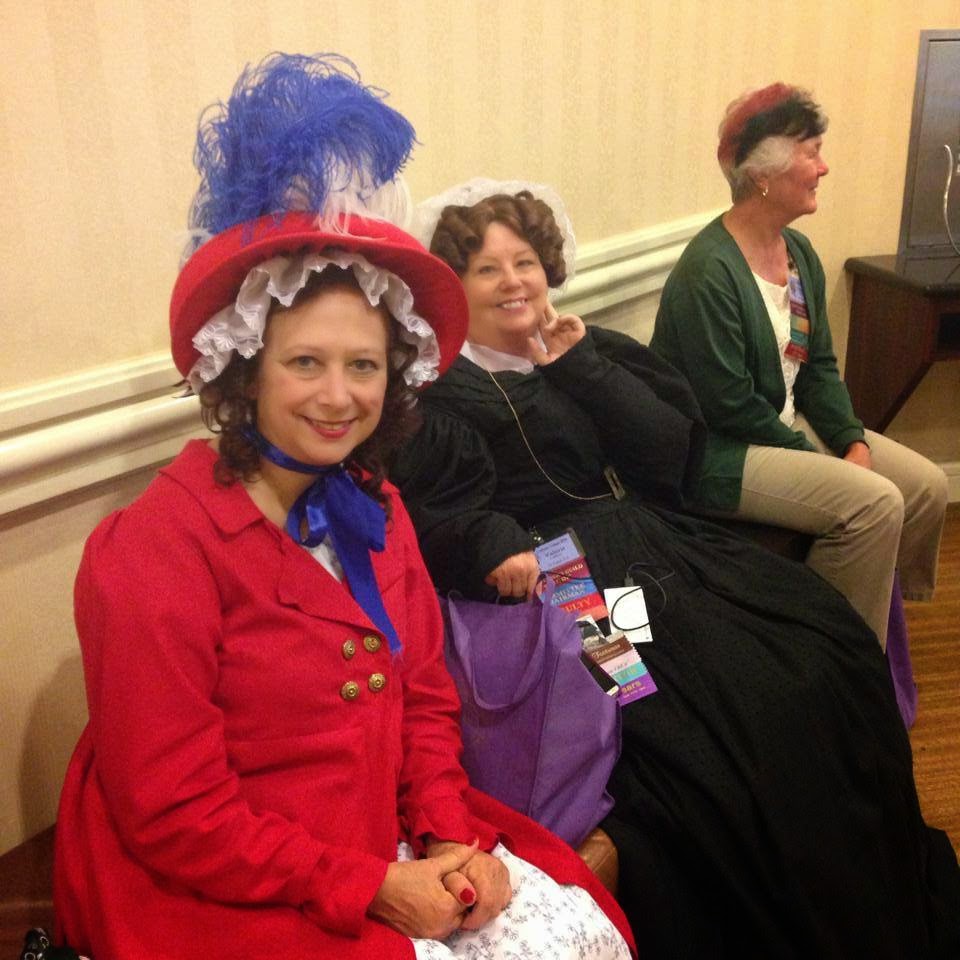 Just a note on my Watch class: as I mentioned I have no photos taken during my class because I was so busy I forgot to hand my camera to someone.  So this is what I have to share is my display case that I brought to show my watch chain collection. 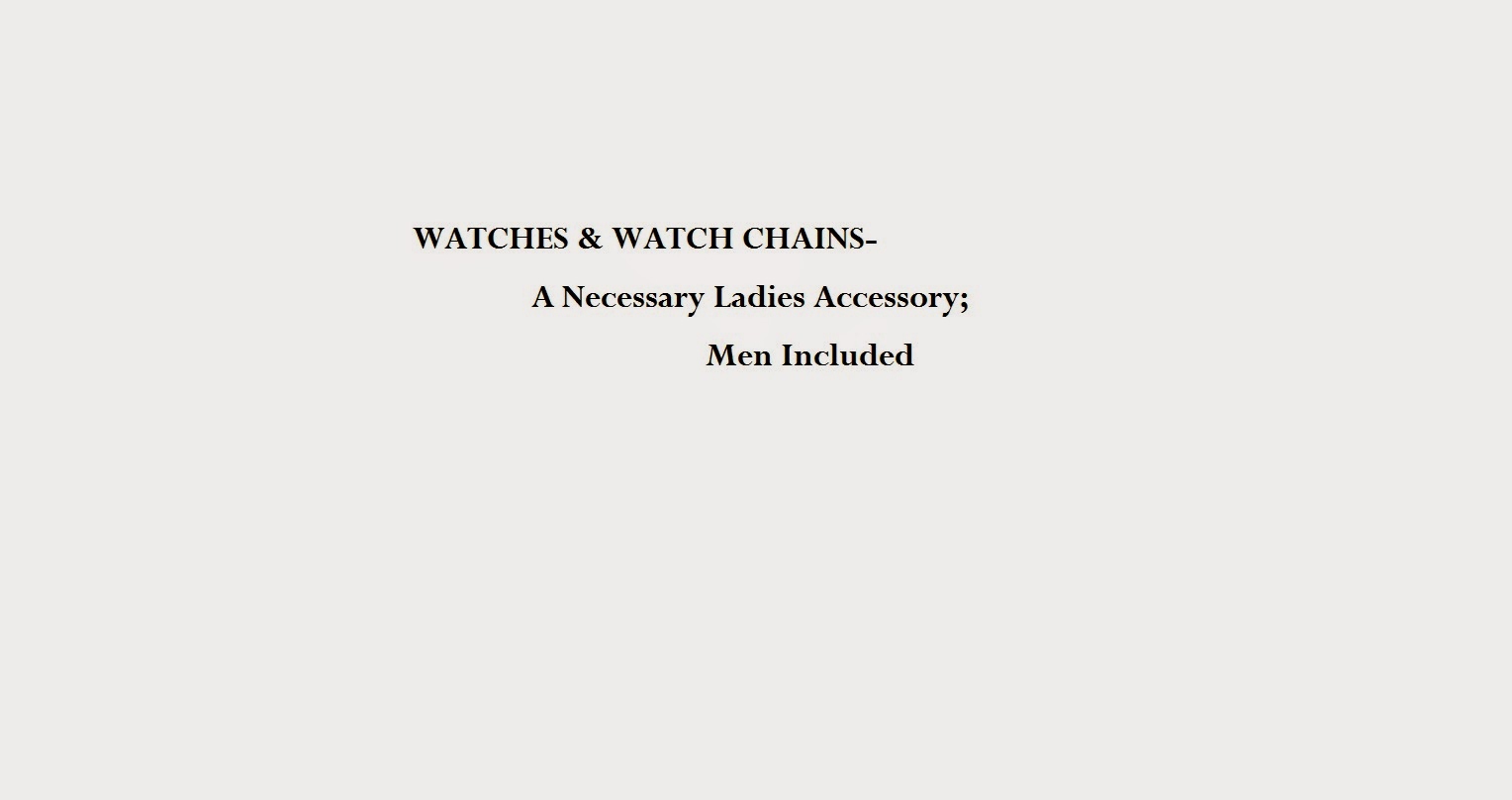 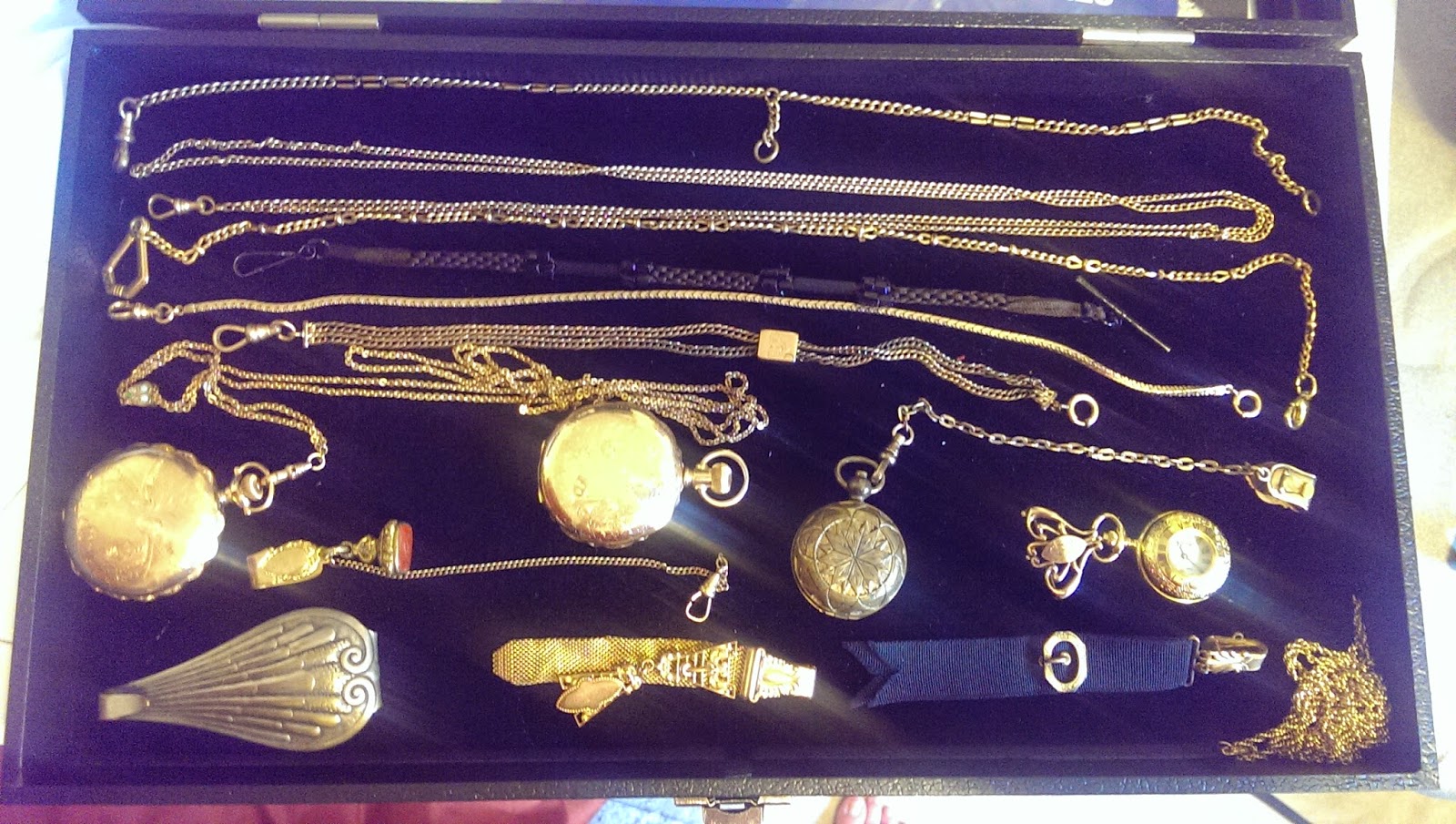 The night before I left for Costume College, I received my grandfather’s pocket watch that my Mom had just found three days earlier and shipped it down quickly for me to bring. This watch had been missing for a number of years and she accidently found it while going through some of my Dad’s things he had squirreled away. See? Squirrels run in the family. The watch was made in 1909, and it had my grandmother’s photo from 1911 in it. It was a lot of fun sharing it with the attendees in my class, and they spent a lot of time gathered around my table looking at everything I brought.  I had a lot of competition for classes that afternoon so it wasn’t as well attended as I’d hoped but afterwards students in the adjoining classes came in saying how sorry they couldn’t attend and would I repeat it next year. By all means I will send in my proposal and just may get that chance again. As I’ve said, it’s a little known bit of accessory women wore and quite a few of them did. I’m all about THE ACCESSORIES!  You need to decorate the cake! 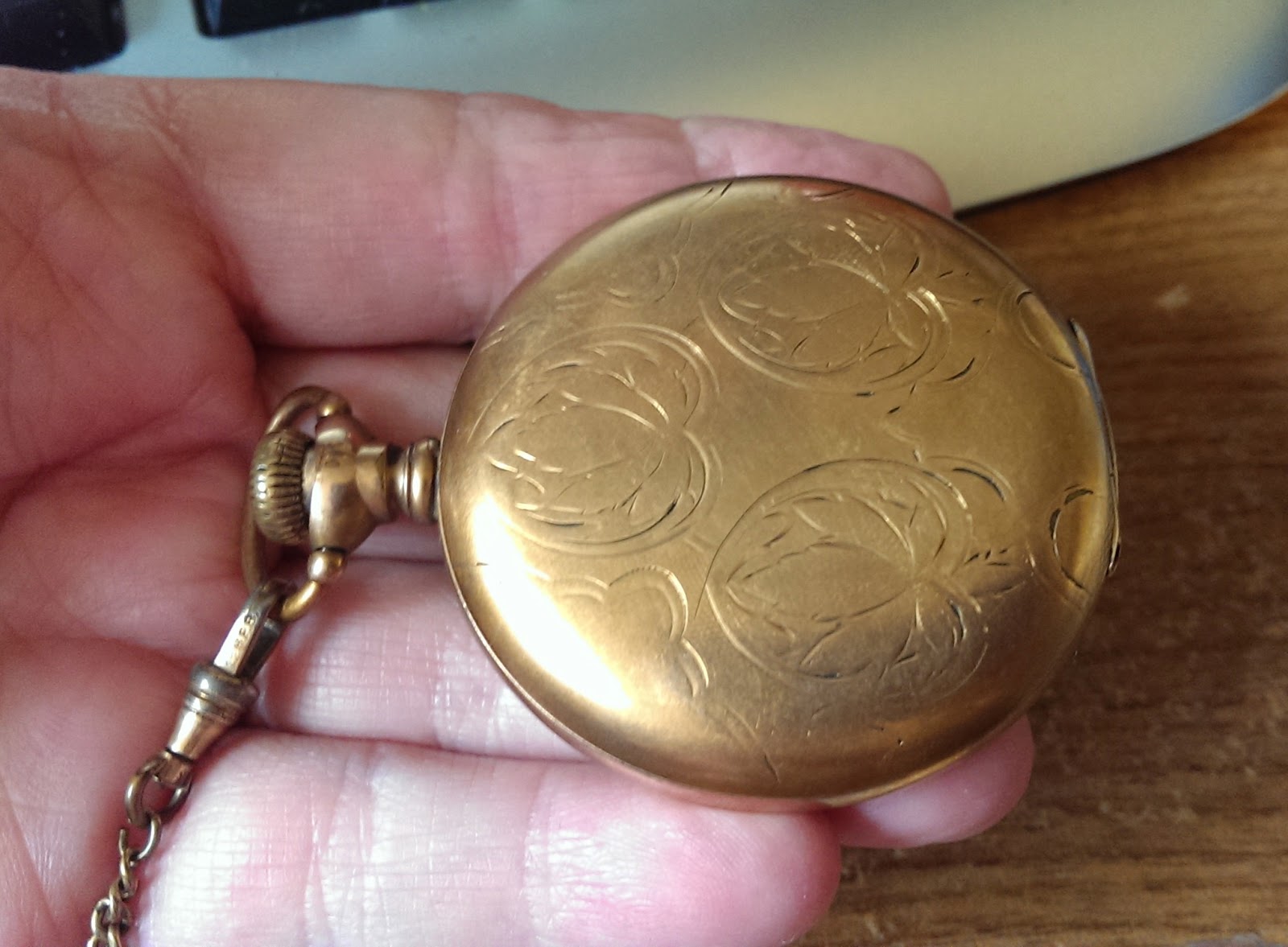 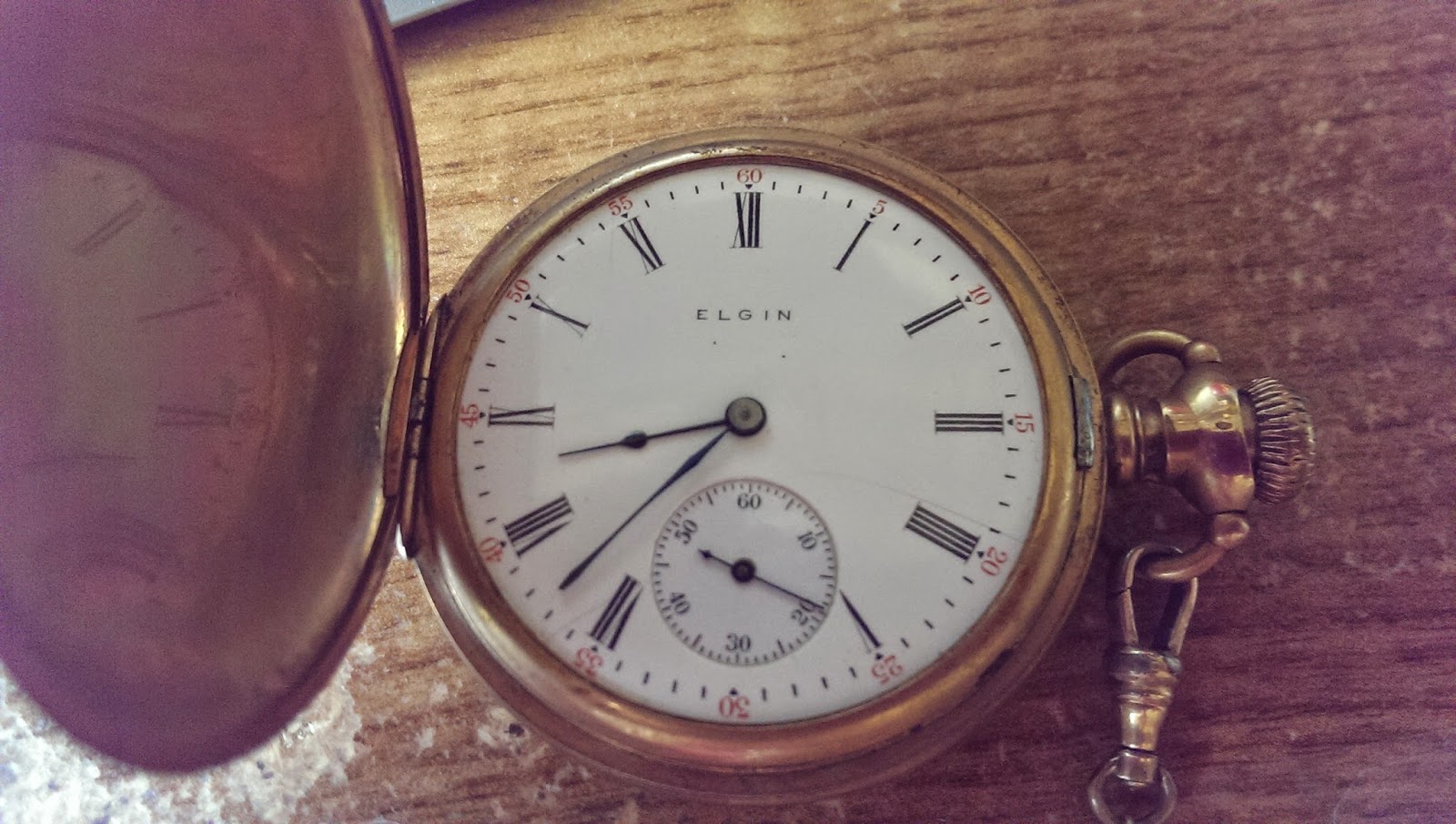 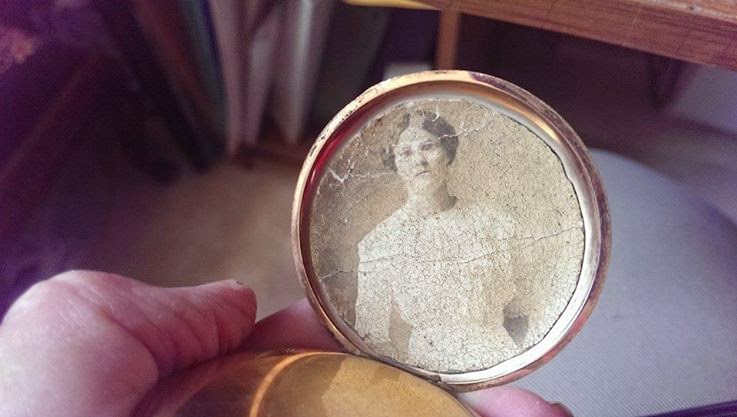 For my further adventures, I’m going to write another entry so this doesn’t get too long.
~~Val~~

Posted by Time Traveling in Costume at 11:54 AM