It's been a busy month

April 27, 2012
The last three weeks have given some of my costumes multiple chances to be worn again. Starting first with the Titanic Costume Walkabout at the Del Mar Antique Show. Over 50 of us attended the show in various costumes to commemorate the anniversary of the sinking of the Titanic. We had travelers, wealthy folk, and ship’s crew members. 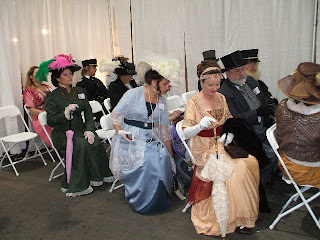 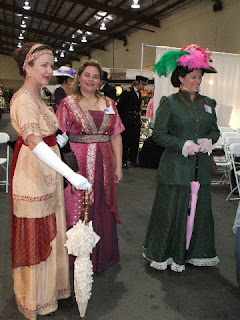 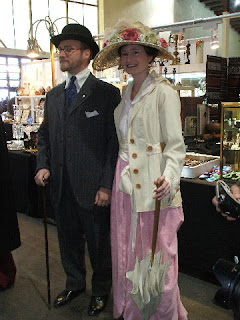 I reprised my role as Dr Alice Leader, who survived the sinking, and had a good time telling my story to the many interested people who asked. I spent about 45 minutes talking to one antique dealer about mourning jewelry. And later I bought a brooch that was missing its woven hair and plan to learn how to do that now. 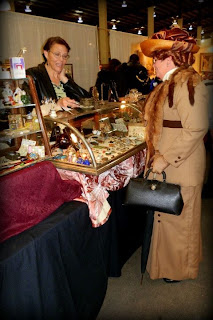 This wonderful group shot was taken of us by Jerry Abuan of zenfolio.com

Next was another fashion show for the Creative Stitchery Guild, which is a group involved in fiber arts and handmade decorative clothing. That’s the best way I can describe it. The show was mainly to showcase wearable art made by its members but some of our costume guild members were invited to model our own “wearable art”. I gave a list of my different costumes I had so they could choose which ones I would model. My green Bloomer gown and aqua La Belle Epoque gown were chosen, and I was also asked if I could model my Victorian underpinnings. I chose the time to wear my underpinnings right after Cindy was done modeling her bustle gown, so I could stand next to her to show how the outer dress got its shape. As I showed them my bustle cage I flipped it up and down to show how I could sit in it, which caused a lot of laughter. Then as I unbuttoned my corset cover so they could see the corset, I heard a lot of whistles. But that’s as far as they got to see. 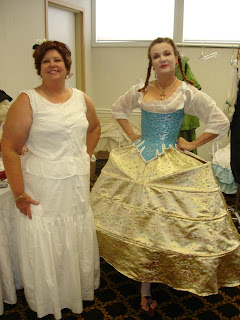 This was Cindy’s pretty pink plaid bustle gown that she was wearing. You can read more about her gown at The Broke Costumer 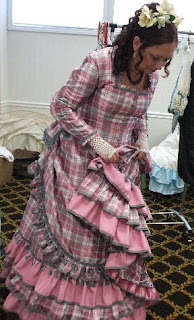 We didn’t have our own photographer at this event, so all we have are photos we took backstage of each other.
Most recently was a Steampunk presentation at a local library that was celebrating it’s 10th anniversary by offering different events every day to the public. When I heard they were focusing on Steampunk books and its origins, I offered to come with other members from our guild in costume. I ended up being asked to give a short presentation of Steampunk 101 to explain to the attendees what it was, and show how we came up with our costumes. I talked for about 15 minutes, then showed a slideshow of different costumes to give them a better idea of what it was. I told them it was Victorian science fiction, an alternate universe, or a path we might have taken by traveling in the future. I was contacted afterwards by some interested attendees who said they “got it”.
The library wanted some hands-on displays for people to look at so I set up my display of painting rayguns and decoupaging travel cases and books. 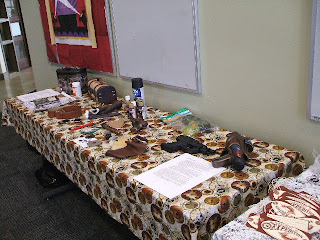 This was our group of costumers who came to help out with my presentation. 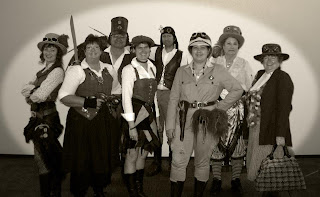 Oh, and I made a new pair of Bloomers to go with my new Steampunk costume. I made a skirt and Bloomers out of a medium weight black cotton. With it I wore a pinstriped shirt and grey plaid vest I already had, and added my accessories. I really liked how it came out. The blouse and vest are too small, so I’m already putting together some new ones to wear to the upcoming Gaslight Gathering Steampunk & Victoriana convention next week. 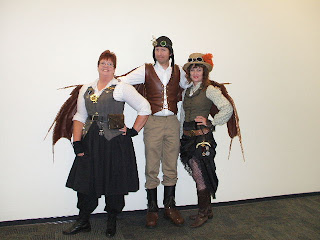 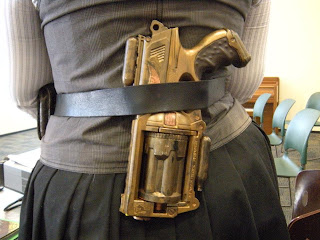 Posted by Time Traveling in Costume at 9:17 PM