I have to admit, right up front, that I am a Downton Abbey fan. But mainly because of its dresses, because, as you know, I am a costume junkie.  I was caught up in the Titanic frenzy of dresses from that era of the frilly layered fabulous gowns. But then I saw the day dresses Lady Mary, Edith, and Sybil were wearing.  They still had an elegance of lace about them and could easily be worn to afternoon tea.
So while others were scanning the internet for photos and patterns of Titanic dresses, I was looking among the lesser known eras between 1912-1914. Finding existing patterns that I could use (ie, not have to scale up) with the correct lines was tough. But the more I looked at fashion prints, and drooled over Lady Mary’s dresses, I started to see them: patterns that underneath the sleeves and collars had the correct bones. I think my eye got better as I kept looking because I finally found three patterns that Lady Mary would be proud to wear.  Ok, the Sense & Sensibility 1912 Kimono pattern and the Hint of History #102 -1910 Collection/Kimono Sleeve Jumper Dress & Blouse are the same designer, Amanda Kastner, and very similar. My bad. She made the first kimono dress for S&S as part of a contest, and then went on with her own pattern line. But she did them slightly different and I like her own version better. 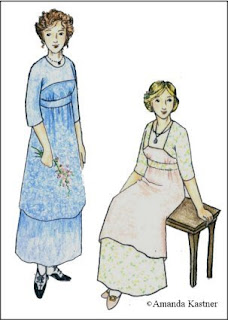 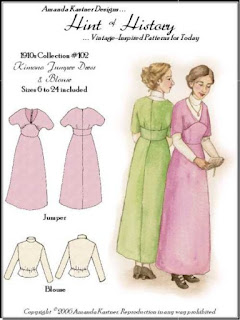 And then I came across this Folkwear #508 pattern for a dress and jacket. In the drawing of the pattern it didn’t look like much but when I saw it made up, wow! Lady Mary spot on! Too bad the weather is warming up so I wouldn’t even be able to wear it till next Winter. 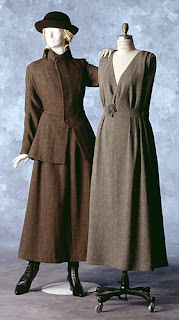 Then I remembered a Hint of History pattern I’d bought a couple years ago that I had liked but didn’t like because of the collar. But if you removed that big bathrobe collar, you have a similar dress to this pretty one Lady Sybil wore. 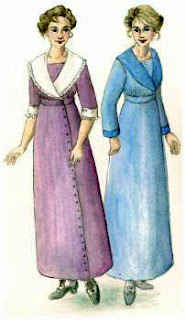 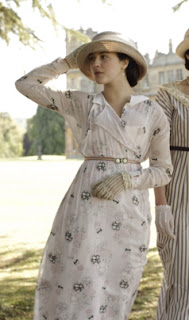 I got slightly distracted by trying to make a 1914 dress from a vintage McCall’s pattern, and it’s close to being done but I’m not sure I like how it looks. With our Titanic Artifact Exhibit tour at Balboa Park coming up on May 5, I needed something I’d be proud to wear. After suggesting the Hint of History pattern to a friend, and seeing how it came out on her, I was sold. I’d purchased a loose-woven, slightly sheer cotton pink striped fabric in the Garment District a couple months ago that I knew would work for this era. I’m proud to say it was only $1 a yard. It did need lining though, and I used thin white cotton to flatline each part of the dress. The true color is more pink than peach as it looks in the photo. 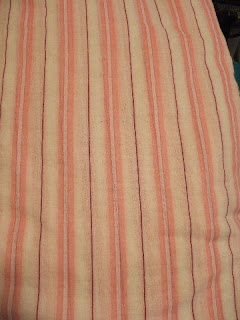 This looks like an easy construct but the pattern has been very simplified. There’s one pattern piece that’s used in part for the skirt back, side fronts, and the front. So you have to cut your fabric to the line indicated for that piece. My suggestion would be to trace each pattern piece on paper and cut them out individually so it’s not confusing. Because it is confusing. I didn’t do that, and I was confused a couple times. And you need to mark which is the top of each piece because there isn’t that much difference between the top and the bottom. But there is a subtle and important difference where the top of the skirt has a slight curve on the hips. So make a note of that.
The bodice is two pieces, with a solid back and two front pieces that will cross over each other. If you decide not to do the shawl collar as I did, you will need to sew a bias edge facing along the front edges. I used some bias strips of my fabric.  There’s a triangle shaped insert that is attached permanently to one side of the front and then closed with hooks & eyes or snaps on the other. The pattern suggested sewing only on three sides and leaving the side that will be attached to the front raw and just finish the edge. But I found it just as easy to sew right sides together with a small opening, then turning it inside out for a nice clean finish. The fitting on the bodice is done by gathering under the bustline. I may need a little fitting in the back and was going to do gathers there as indicated on the pattern but after seeing an original gown that used pleats to fit it, I’m going to do that in the back instead. 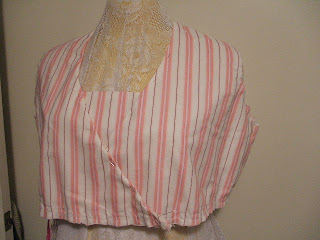 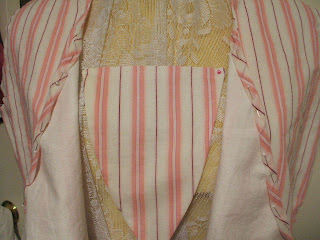 Even though I’m not doing the shawl collar I’m still going to have a collar. At this time I’m leaning towards making a narrow shorter one out of white linen with an overlay of lace. This gives you an idea what I’m thinking of but I don’t think it will be the shiny lace shown here. I just recently purchased an antique collar on ebay and when it arrives I’m going to see how it looks. It does need a solid background of white over the pink stripes to show off the lace. 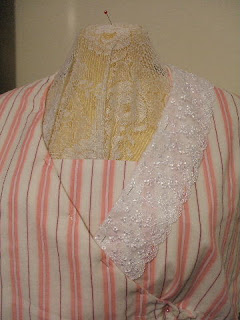 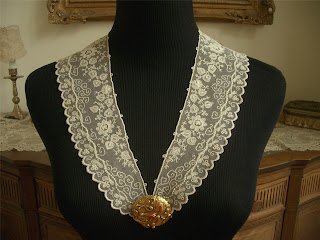 I sewed the skirt panels together leaving the front overlap open. Once I finished those two edges, I laid them on top of each other to fit me, then basted them together up to 8” from the top, which will be my opening placket.
Next up was adding the waistband between the skirt and bodice. The waistband had two pieces, the inside and the outside but they’re sewn on separately as far as I can see. With a little explanation from a friend who’d already made the dress, I managed to fudge it as best I could, since neither of us could really understand the directions. It wasn’t us. It was the pattern.
So for starters, I sewed one piece right sides together to the bottom of the bodice. And then did the same to the top of the skirt. I thought I would have some excess fabric in the back of the skirt but didn’t. However because of the crossover bodice, I did have excess on the right front side of the skirt. I didn’t want to gather it to make it and me more poofy, so I just made a pleat slightly in front of the side seam. I think I remember reading in the pattern about cutting that away and curving it in more at the side seam. When I make this again, and I will, I’ll look into that a little more. In fact, once this next event is over and I have some time, I’ll probably do a little altering on this one. 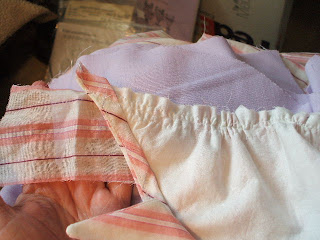 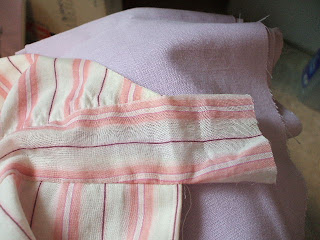 To attach the inside waistband, I ironed down  the edges of both sides of it, and laid it onto the inside of the waist and slipstitched it on. Here you can see the inside of the front waistband attaching the bodice and skirt together. Once that's done, my friend recommended topstitching the two together. 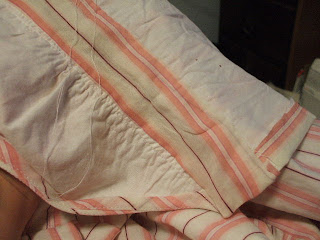 The lace collar I bought finally arrived and it’s more ivory than white and looks kind of yellow on the white background, so that’s a no-go. After reading where someone else was making the same dress and used the smallest version of the pattern’s collar, I thought that was a great idea. But then I laid my lace collar over it and traced it onto the pattern to make it narrower instead of trying to draw the lines free-hand. I also made it shorter instead of going all the way down to the waist. 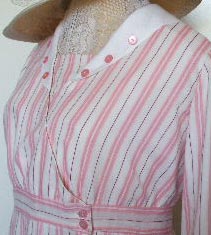 The sleeves were very easy to sew and attach but the larger size I used left a very very wide cuff. So I sewed it in a little narrower towards the end where the sleeve cuff is attached. I used the cuff pattern and cut it narrower so it would fit my altered sleeve. The cuff is pretty straightforward on attaching, but different than I’m used to. Sew them right sides together, then one of them right sides to the sleeve and stitch. Turn it back and turn it partly under to the inside and slipstitch it to the back. Then fold it partly back to the outside, leaving about ½” under, and back over the sleeve.  Clear as mud, right? 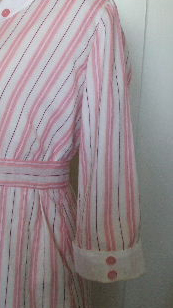 My first idea for buttons was to cover some, but as time was running short, I bought some pink ones with a dull satin finish. After I’d sewn snaps along the inside of the bodice overlap, I thought buttons would be too heavy to put there, even if decorative. But the bodice needed some color. I saw an antique dress that had some buttons on its collar so I took that idea, and placed three on each side, and repeated two of them on each cuff.  Then I made buttonholes on the waistband and down the front placket to use more of the buttons.  And this is what I finally ended up with.

Accessories will be this vintage hat I have, white boots since I don’t have any other shoes for this yet, a brown leather antique Edwardian purse, & crocheted lace gloves. Tomorrow I’ll be wearing it to the Titanic Artifact exhibit.  How do you like that? Another dress finished just the night before an event.

Posted by Time Traveling in Costume at 8:48 PM