One Hundred Years of Mourning Fashion

February 2-3, 2013
A year ago in 2012 just after the last Riverside (CA) Dickens Festival fashion show, I kept thinking about doing more on mourning dress styles and suggested to our coordinator about doing them the following year. After seeing a presentation at Costume College on Dressing the Silhouette which showed ladies dress from the inside out from 1800-1910, I came up with the idea of doing something similar but expanding on it. I thought a solid black silhouette would make the changing fashions really stand out. And we could include some education on mourning customs.
This is our mourning fashion timeline at Dickens last weekend, starting on the right-  1810-Lisa Klassen-Barnes, 1820- Cat Frazier(absent), 1830- Gina Lovin, 1840- Michele Peoples (worn by Pamela Swank-Yates),  1850- Mary Drobnis (dress by me), 1860- Shelley Peters, 1870- Kathy Loftman (dress by Arlene), 1880- Me, 1890-Tonya Clevenger (absent), 1901- Arlene Terrell, 1910- Cindy Piselli. 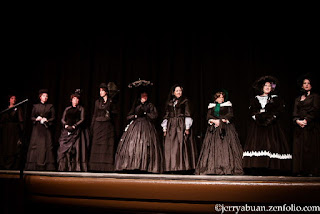 I had already been talking to Shelley Peters for the last couple years about us doing a couple more gowns, since she portrays the Widow Peters already. I contacted a couple other ladies who had been in the previous shows and a few others, and asked if any of them would be interested in committing to making a correct mourning gown for a specific time period. I chose the dates of 1810-1910 to give each model a decade to cover. I didn’t have much problem filling most of the spots but gave them all the opportunity to change their dates among themselves, which we did a couple times. They each had to do some research of what was appropriate for the time period, both in the dress style and the mourning customs. Most of the customs were similar with a few variances, like when white was still worn with black in the earlier decades. It would also encompass first and second year mourning if they chose to, and different levels of economy and society. They had a year to play around with their design and construct it. One of them had hers made for her by one of the other models; one wore my 1850s mourning gown, and one gown was worn by another model we brought in at the last minute. We lost a couple ladies to jobs, illness and injuries.
Since my favorite decade is the bustle, I chose 1880, specifically 1886, as my decade. 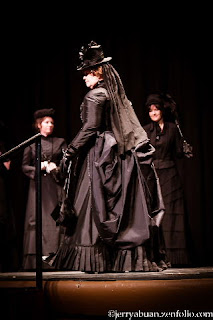 I already had the skirt made so my focus was on the bodice, bustle overskirt, and hat. I also had a muslin for TV’s 463 French Vest bodice, and used black velvet as the vest insert.  I used my black faux-silk taffeta and purchased a big bag of black velvet covered buttons to close the front of the bodice from Trim 2000Plus in the Garment District.. My first idea for the bodice was to make some pleated trim to go along the edges of the vest but after seeing some saw-tooth trim a friend made, I decided to try my hand at making that. And I failed. Then I remembered I’d purchased some black grosgrain saw-tooth trim from the Garment District in my stash. I had 10 yards so I could use as much as I liked. I basted it down the sides between the velvet insert and the taffeta side panels so it would stay in position when I machine-sewed it. 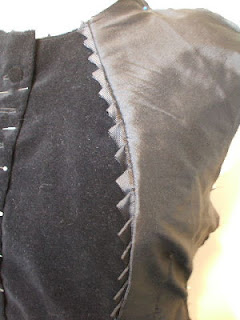 I repeated the saw-tooth trim with two rows on the sleeves with one row under the sleeve edge, and another about 4 inches up from the edge. I finished the top of both with a one inch wide velvet ribbon that I slipstitched on. I used four of the velvet covered buttons and sewed those evenly between the two bands. Once I put the collar on, I hand-stitched some more velvet ribbon around it. 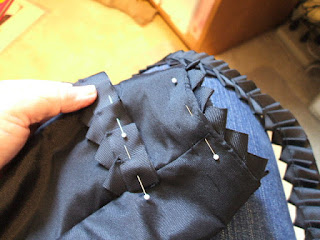 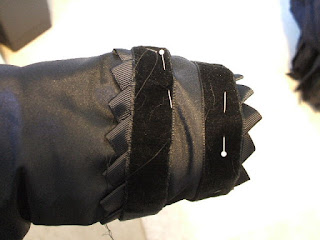 The pattern for the overskirt, TV 374 is an asymmetrical and splits open on the side front. It has three different types of pleats on it with pleats on one side that drape across the front to the other side, and a group of pleats above it on that side seam. This photo shows the front pleats to the side but got a little wrinkled being carried to the fashion show. 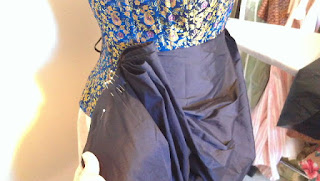 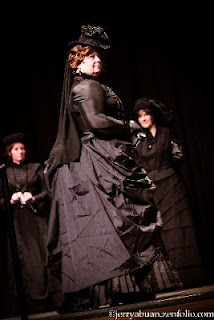 Then a group of burnoose pleats in the back create the bustle. Burnoose pleats are like a hood on a coat that creates a poof. I think. I tried doing them three times before I got them to poof. I still don’t think they’re right but they seem to work. Although I noticed in one photo one of them had turned the wrong way and just looked like a point. But they really are cute little poofs. This photo shows them gathered together, and where the white pin heads are were attached to the waistband after they’re turned inside out to poof. 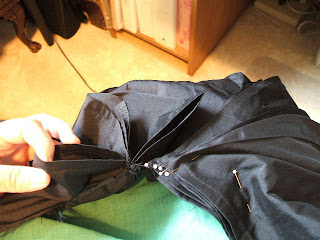 On the side opening of the front, I sewed more of the saw-tooth trim all the way down both sides and partly under the bottoms until they didn’t show. The fabric curves under there so you wouldn’t see it anyhow. 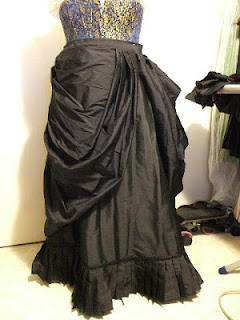 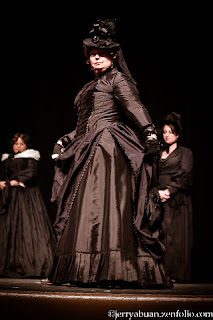 My accessories were a postman-style hat my friend Cat Frazier made for me from scratch, using buckram covered with taffeta and trimmed with a black feather, ribbon, and a black glass round brooch I’d found for 25 cents. She also made me a taffeta and velvet drawstring bag to go with it. I stitched a black ribbon to the edges of a white linen hankie, and wore black cotton gloves. My mourning brooch was an antique jet oval I bought on ebay from Norway; in fact from the town my grandmother came from. It has a small window in the back to hold a lock of hair.  I bought the reproduction earrings from a shop at the San Francisco Dickens Faire last December. 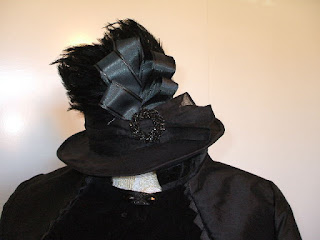 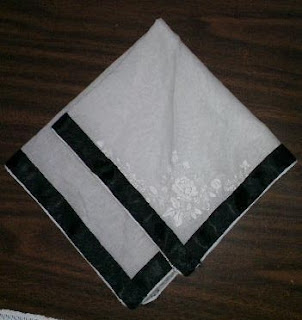 Here are some candid photos of me while walking in the Characters Parade after the show on the streets. 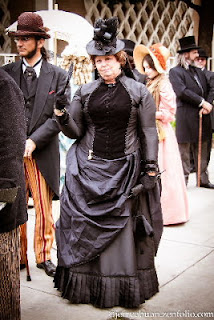 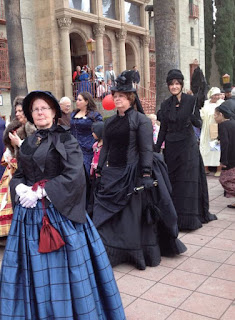 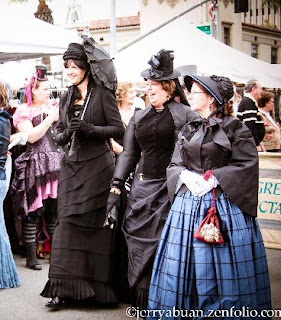 Prior to our coming onto the stage, our coordinator, Nancy Smith, invited me out to introduce me. This sent a few tingles down my back hearing it. Good ones.
“ONE OF THE THINGS I TRULY ENJOY ABOUT BEING INVOLVED IN THE HISTORICAL COSTUMING SCENE IN SOUTHERN CALIFORNIA IS THE OPPORTUNITY TO MEET SO MANY TALENTED LADIES. VAL IS DEFINITELY IN THAT CATEGORY. SHE IS A PAST PRESIDENT OF THE SAN DIEGO COSTUME GUILD AND A MEMBER OF COSTUMER’S GUILD WEST. SHE HAS DONE PRESENTATIONS AT MUSEUMS AND AT COSTUME COLLEGE, MOST RECENTLY BEING HER TALK ON AMELIA BLOOMER AND REFORM IN WOMEN’S DRESS. SHE HAD ASKED ME LAST YEAR IF I WANTED TO DO A SEGMENT ON MOURNING FOR THIS YEAR’S FASHION SHOW, AND HAS BEEN PREPARING FOR THIS FOR MONTHS. I AM THRILLED AND HONORED TO BRING TO YOU ONE HUNDRED YEARS OF MOURNING FASHION.”  *********************** 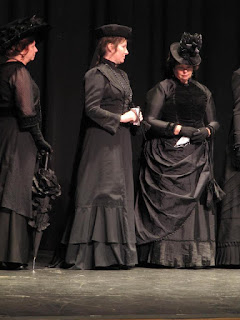 For photos I took backstage of the fashion show while we were getting ready, please go to my album here.
http://www.pbase.com/cinnamonhrts/riverside_dickens_festival_2013

My thanks to all the ladies for their hard work and to photographers Brendan Conoboy, Russ Loftman, and Jerry Abuan for these lovely photos. For more photos, please visit Jerry’s gallery .http://jerryabuan.zenfolio.com/p793860954

We found this link to the Riverside News online, and I'm in the first photo on the left while we were out on the streets. http://www.pe.com/photos/photos-news/20130202-riverside-20th-annual-dickens-festival.ece


Posted by Time Traveling in Costume at 12:25 PM