One Hundred Years of Mourning fashion show at Costume College 2013


Also known as “A Murder of Crows” 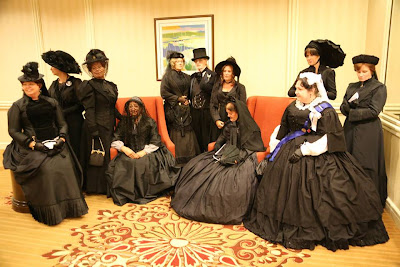 I have to admit, having a fashion show at a costume convention with 12 people is a bit of a stretch, especially when those people are also attending the convention and some of them are teaching classes. So I was extremely gratified when all but two were very happy to repeat our successful show from the Riverside Dickens Faire, and I was able to find two models who could wear the two gowns that those missing models who were unable to attend so graciously offered. A couple of them even drove up for the day just to be in the show. And this time I invited Nancy and Russell S. from Riverside Dickens to be our narrator and Undertaker/doorman.
I made up and printed programs for Russell to hand out to the students that had each model listed with the era of their gown so our audience could follow along better. The whole idea is to see a living timeline of the changes in dress silhouette.  I printed them on white paper with this gravestone on half of one side then on the opposite side of the paper printed the information so it could be folded in half. I thought it would be a nice touch to the program. 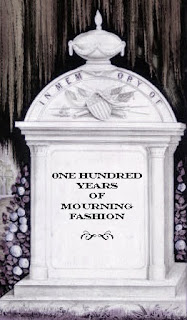 I also found some background music to play as people entered the room to sit down to create an atmosphere.  It was Beethoven’s Symphony #7 and I found it on itunes for 99 cents. I only wanted the first couple minutes allegretto from the symphony to play because the second half was a little more upbeat, and not quite the mood I wanted. Fortunately I found it was the same music that was used in the movie, “The King’s Speech” with Colin Firth. They did exactly what I wanted in his “Speaking Unto Nations” radio talk. If you want to hear it to get into the mood while you read this, its here on youtube. Speaking Unto Nations-Beethoven's symphony #7  Even though the subject matter of our presentation isn’t the happiest, we had bits of joking and light comedy to lighten the mood so it wasn’t gruesome. My intention was for it to be educational and the dramatic black silhouettes showed the different decades off very clearly.
I can tell you we got a lot of attention when we were walking around and assembling for this. A lot of photos are showing up, and I’ve been waiting for more before I finished this entry. 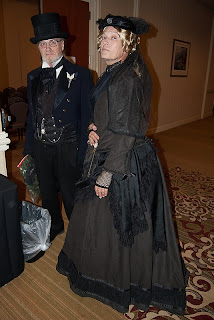 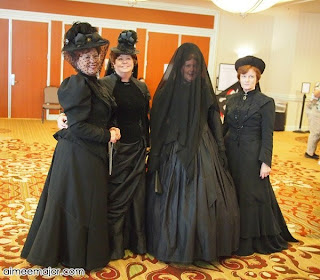 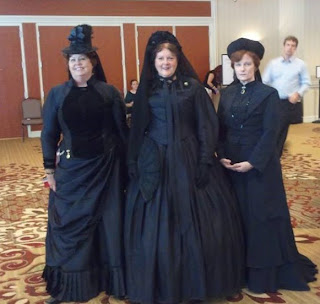 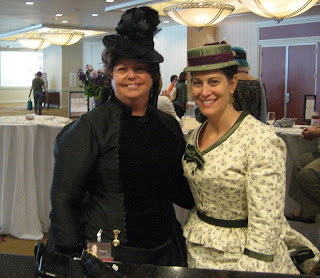 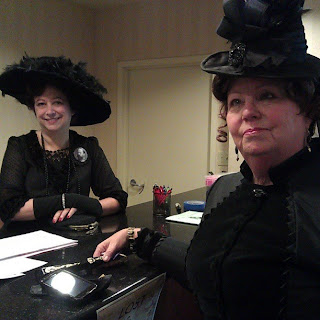 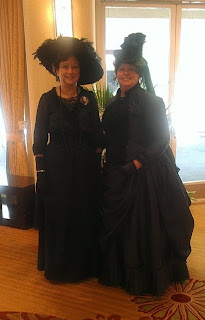 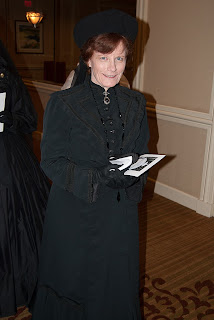 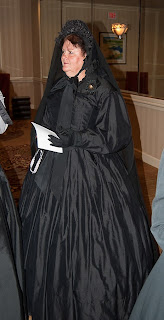 With the set-up at Costume College (CoCo), we would be doing this in a classroom setting, not a stage this time. That caused me some worry as to how we would be able to line up along a wall for people to see us. We were assigned a room on a corner that had an entrance at the back and on the side. The room was long and slightly narrow so I requested the hotel turn all the chairs sideways to face the long wall. I had the students enter at the back door and we lined up outside the front side door so we could walk in after the music stopped.  Have I mentioned  herding cats before? Trying to figure out who walked in first for the timeline to end up correct along the wall seemed to be mindboggling to us all. 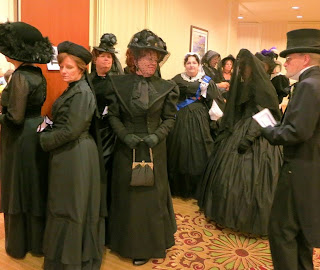 Nancy began reading the introduction to the program and introduced One Hundred Years of Mourning Fashion, and we walked in. For a nice touch, Nancy and Russell had made a black wreath and hung it on the front of the podium. I thought this was a very thoughtful addition, and someone later sent me a pic of mourning drapery. Hmmmm…this could turn into a big production someday. 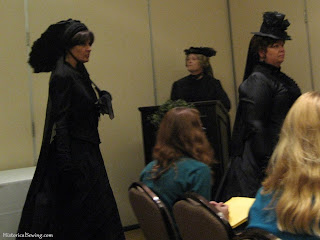 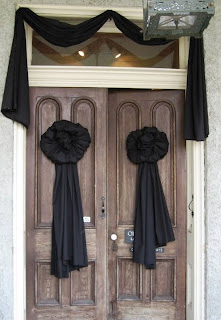 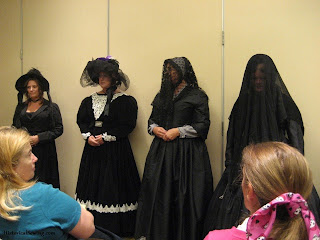 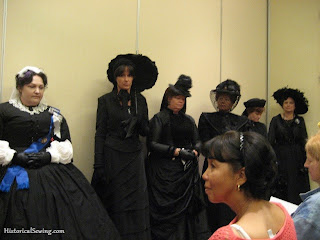 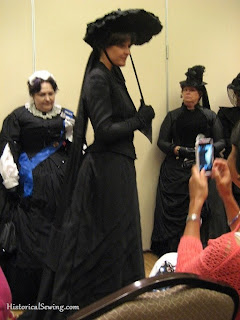 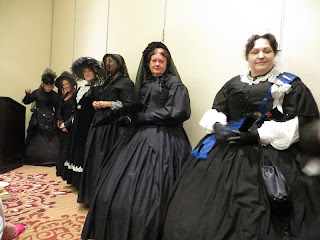 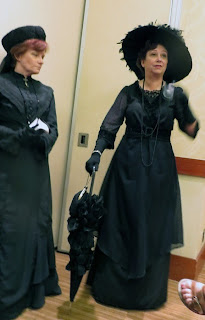 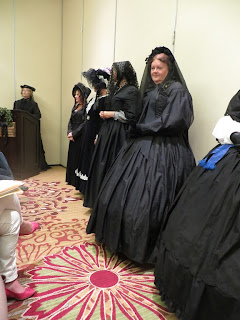 We had a total of 12 people included in this presentation, when I invited Kristine S. as Queen Victoria (1860), and Nancy as our narrator (who also dressed in black) and Russell as an Undertaker. I think we were very impressive. The audience was able to see us quite close, the first row being about 5 feet away. At the end of the presentation, Nancy surprised me by adding, “As the author Charles Dickens would say, I give you the Founder of the Feast, Valarie LaBore”. 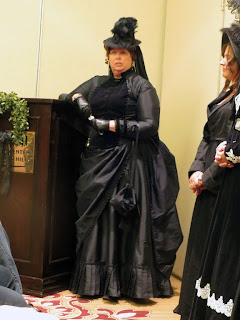 I went up to the podium to thank all my models, and to tell the story behind how this all came about. After being inspired by a smaller version of a timeline silhouette of underpinnings, I talked to Shelley P. about us both doing a few more years of mourning dress at the Riverside Dickens Festival fashion show. I contacted Nancy S., the director & producer of the show and asked if we could include it. With her approval, I began contacting costume friends of mine and over the year each of them researched the year they wanted to make. We all tried for as historically correct as possible.
Then I opened it up to questions from the audience and of course the first question everyone always asks, and it still confuses us, what are the stages of mourning in the dress colors? We found out it isn’t cut and dry because it seemed to vary. First year full mourning was unrelieved dull black. No arguments there. Afterwards, additions of color to collars and cuffs were accepted using white, grey, lavender, & mauve. Third year sometimes included the entire dress being  grey, lavender or mauve. But again, that varied according to who you read. And to confuse matters further, some of the earlier time period gowns in full first year would have white. White was also used when mourning a child, as my 1830s model Gina wore.

Our dresses were variously made from cotton, dotted swiss, a modern crape, brocades, embroidered cottons, silk taffeta, and broadcloth. Some dresses contained lots of detail, others not. Each model wore some jewelry accessory that fit her time period. Finding history on the jewelry was probably the hardest because we just couldn’t find it. Our best research was of photos and catalog photos of the mourning dress of the time periods. I found we could also just use a dress of the period and make it black. I don’t think anyone followed the custom of throwing it into a vat of black dye instead of making one. But it was done in the poorer classes. I own two mourning petticoats that when washed, the dye comes out. I can’t positively ID them as mourning but it would be unusual to have them be black since the Victorians liked to be able to have clean white underpinnings.
As we ended the show, our audience gave us a very appreciative round of applause and commented on how impressed they were with the workmanship of our gowns, and the details they put into them. I was so proud of each of them because they were all very nicely done, and weren’t just plain old black dresses. My final admonition in the presentation was “back then wearing black was also considered fashionable as it is today, so buyers of antique fashions beware: the black gown you are looking at may not be mourning but may in fact be a fashionable little black dress.”
These are photos collected from all my friends who took them of us in the class and afterwards in the hallway. I know there are many many more but I wanted to get this blog entry done now. I’m collecting them all to share in my Pinterest page on mourning too.  https://www.pinterest.com/timetravels/one-hundred-years-of-mourning-fashion/

I’d also like to thank Mary J., Jennifer R. of Historical Sewing, Rebecca M., Rebecca R., Evan P., Amy M., and Loralee P-O. for generously sharing their photos with me for my blog and album. In fact ALL of us thank you. 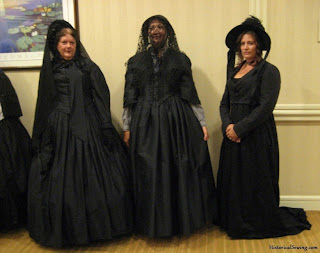 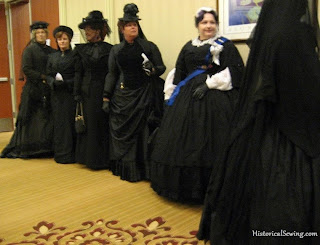 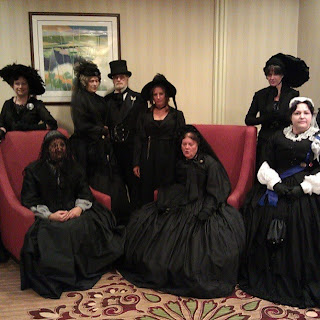 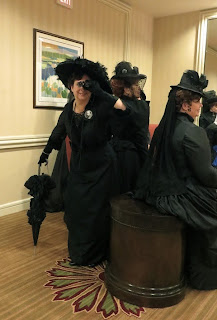 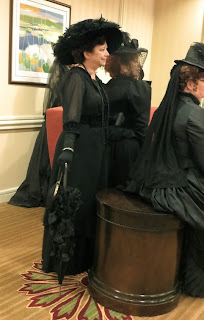 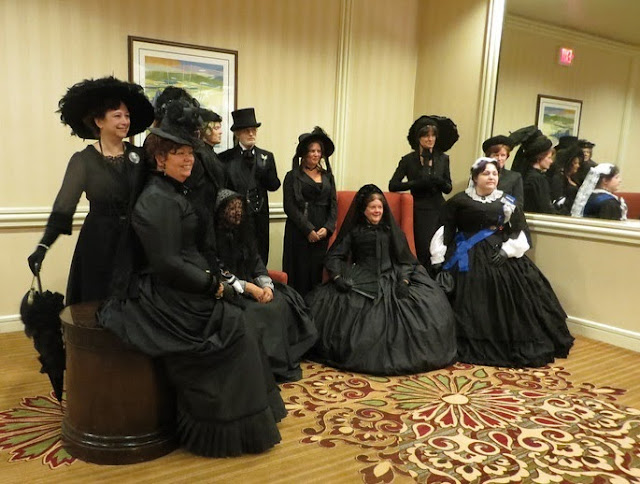