After I finished the last 1894 Brown & Aqua Polka Dot outfit, I decided I wanted to make the same blouse out of a white cotton with scissors designs on it I had. It could go with another grey skirt I was working on for yet ANOTHER secret outfit for Costume College. Isn’t that what many girls did, have multiple blouses for multiple skirts to mix and match?
So this was the pattern I used, Truly Victorian #494. And this was the fabric I bought at Michael Levine’s in the Garment District in Los Angeles. At the time I bought it I already knew it was going to be a 90s blouse. 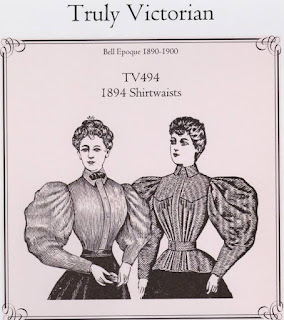 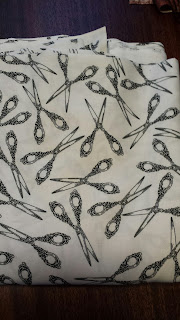 I was up in Washington state visiting my Mom for two weeks, and I always bring a/some sewing projects with me, so materials for this blouse and a vest for another project came with me.
It’s always a bit hard to do sewing projects in places other than your home when it’s not set up as a sewing area. So I had to make do with a large desktop to cut out my fabrics. Also, not having your own sewing machine you’re comfortable with has its own problems. I’ve fussed at my Mom for a couple years about the inexpensive plastic Singer she’d bought after her absolutely fabulous 1950s Pfaff sewing machine motor finally gasped it’s last breath. The little farming town she lives in doesn’t have anyone that can do repairs or replacement parts like it needed, and she’s at least two hours away from a major city that might. But since she wasn’t sewing much anymore, she didn’t think she needed anything expensive to replace it. So I’ve dealt with a clunky noisy machine that doesn’t like me much either.
This time I decided to check around town and see if there was any place that I might rent a machine. They’re really big into making quilts and there were two quilt supply stores there. But sadly, no rentals. *sigh* So Plastic Singer and I compromised and we didn’t do too bad this time and played nice.
Four days before I was leaving for home, we stopped in one of the large thrift stores and I was looking for large white sheets to use for cutting out patterns and making my muslins from. Used queen-size sheets here go for $2-$4 dollars each, and usually can get you about 10 yards of fabric, so that’s much cheaper even than the $1 a yard muslin I get in Los Angeles, or worse when I’m home. *grumble JoAnn’s grumble*. There must have been a lot of Spring cleaning because I came away with four Queen-size sheets, plus Mom dug a few out of her closet for me. *Score!*

And I usually check the sewing section to see if they have any old patterns, keeping some of my vintage friends in mine all the time, or hooks & bars, wide bias tape, etc. In the past they’ve had a couple antique sewing machines, and sometimes a treadle one. So it’s a fun place to check out. This time two table-top machines caught my eye; a metal case Kenmore for $45, and a metal case Singer for $22. $22! You’ve got to be friggin’ kidding me! Both had tags on them that said it had been tested and ran perfectly.     Hmmm… Should I? “Yeah, Mom, coming now!” So off we go home. That night I thought about it. It was cheaper than renting a machine. It wasn’t THAT heavy if at some time I’d have to take it home on the plane, or even ship it via UPS. A really, really heavy one my Dad had mailed to me years ago only cost $60. I talked to Cindy about it the next day and made up my mind to go back. If it was still there, it was meant to be. I even considered maybe buying the other one in case any of my friends around here needed an inexpensive one too.
And it was! 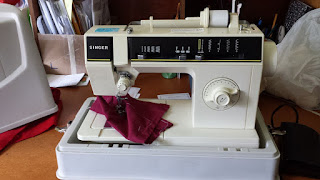 I did some test stitches on it, and it ran like butter. Then I eyeballed the Kenmore. But alas, they didn’t know where the cord was. They said they get them stolen some times. So the Singer it was! And it had a carrying case with it.
Back home I was confronted by Mom with it. She said since it was my birthday she’d pay for it. Yay, Mom!
I was able to finish my blouse on it up to where it needed buttonholes, which I’ll finish at home, and sewed as much of the vest as I had time.
While at the JoAnn’s in town (note* it's 30 minutes away), I bought some black dome shaped buttons to go on the scissors blouse, and they actually had enough cards on them. And I found the pewter grey metal buttons I wanted for my vest. Gotta love small towns. Sometimes. The black and white scissors fabric with the black buttons goes very nicely with my grey twill skirt that you can see at the bottom of this photo. 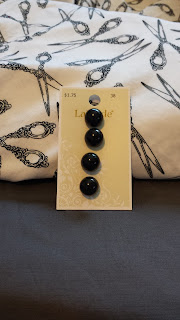 I finished the blouse as much as I could there before I flew back home, and will be finishing it later today doing the buttonholes and hemming the sleeves. I think I’m going to take a couple more tucks in the front where it goes into the peplum like I saw in a photo somewhere. And I think a little black bow tie might finish this off very nicely too, like this lady in the old photo. At some point, maybe a wide black belt with a buckle might be nice too, if I can find a wide enough buckle.  I may need to go hunting for more boater hats too. 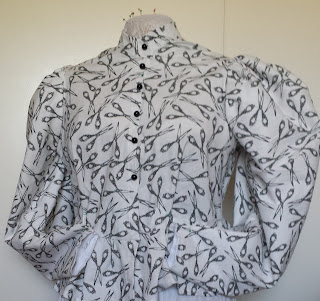 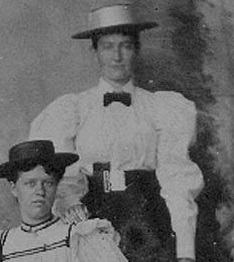 You know how sometimes you come up with ideas when you wake up in the middle of the night? I had an ahah moment about how I line my sleeves with two layers of netting sandwiched between my fabric and flatlining. I’ve been cutting out a full size sleeve of the netting to keep it stabilized. My idea is to only go to the elbow next time but when I top stitch it to my flatlining, I can sew straight across to stabilize it to that, then sew the whole thing to the inside of the sleeve. That stitch line won’t show except on the inside. It doesn’t save much netting but it also doesn’t make stiff cuffs.

Chloe didn’t waste any time moving into my sewing bag when I came home. 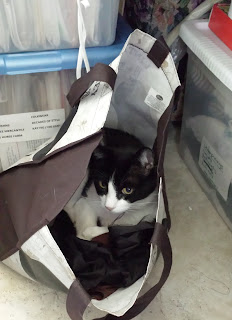